To some, deconstructed sparks confusion.
To me, it spells fascination.

They say the road to success is always under construction, but the best testament to deconstruction is whatever lies at the other end, reconstructed. 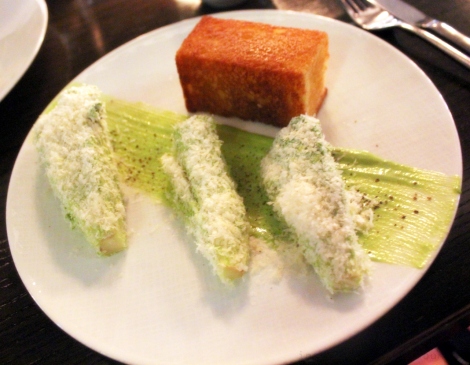 I wandered into candlelit decor in the sparkling summer of Chicago, the only season to tolerantly step foot into the icy city which has, however, made it to the top pedestal of my culinary taste palette. The candles against a red backdrop were a stark contrast to the heated air, and made me ponder at the decor intentions of Chef Graham Elliot, notably known for his accolades including one by Food and Wine Magazine. With a former Michelin Star in his cap, GEB (aka Graham Elliott Bistro) was his more casual concept of fun food. The row of candles are actually repurposed to honor Elliot’s heroes, and do not distract form the globular light of the open kitchen. I perch myself behind a menu brimming with possibilities of deconstruction. For true to the concept of simplicity and a trio of ingredients per dish, that’s exactly what I saw – ingredients, not dishes. 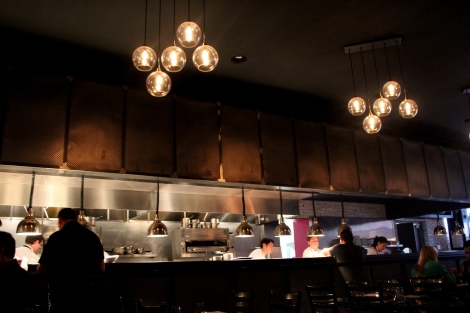 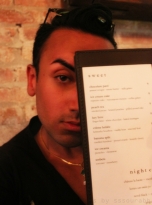 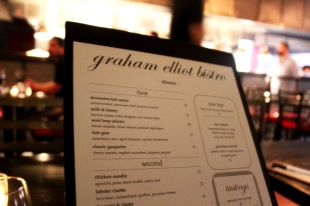 I started off with the inquisitively named milk and honey, actually the name for a salad. Half expecting cookies to be served to the devouring cookie monster within me, I am surprised at the freshness and lyrically composed servings on the plate. 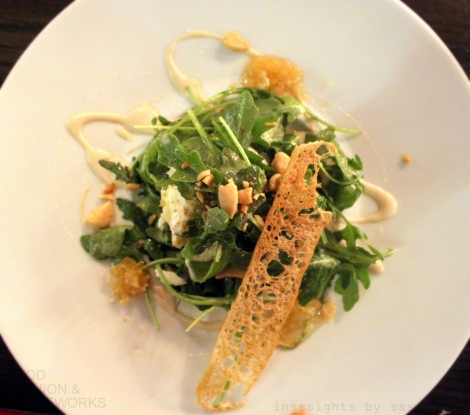 A pile of arugula was interlaced with hues of white and gold, the latter being a new favorite hue. There is the freshness of burrata cheese, a hole-y crouton crisp slab of ciabatta bread, and most importantly, the marcona almond puree honey soaked honeycomb. Literally, honeycombs, in their perfectly trigonometric shapes and doused with more gooey gold than any pot of Pooh Bear‘s treasure. 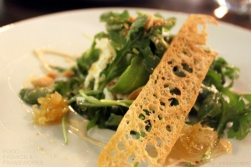 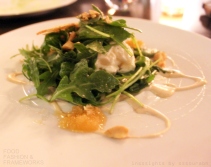 I never quite had the appreciation for honey, but when combined with the bitter of the arugula, the chill saltiness of the cheese and the crunch of the bread and almonds, it made for a sumptuous, seductive bite. Owing to the velvety volumes and slow motion nibbles with golden strands of honey, this qualified as an indulgent salad. 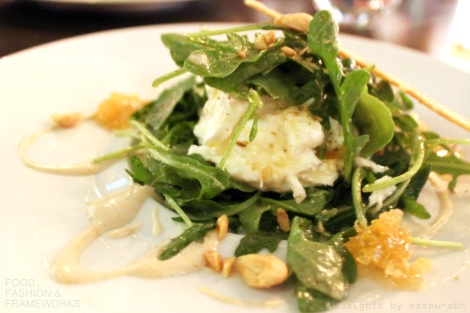 And next up was yet another salad, albeit making my toes, eyes, heart and belly tingle as it had been marketed to me as a deconstructed Caesar salad. Now considering I do not like Caesar salad’s for their mainstream simplicity and easy replicability, this was quite the risk. But evidently, one that paid off, for what arrived was the definition of deconstruction and reconstruction. Art, and architecture, could not have been more creatively configured. 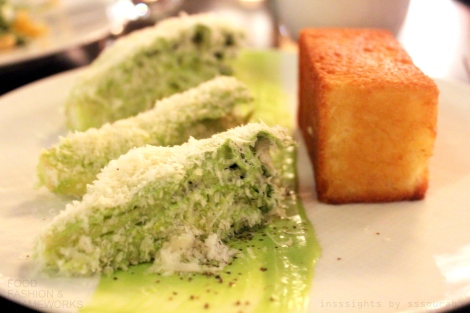 There were three romaine hearts, doused with Parmesan snow and pepper, alongside the return of the infamous Twinkie! Taking a page from yesteryears and pop culture, tossing garlic and Parmesan mascarpone into a perfectly sized savory Twinkie was probably the most creative invention I had seen since the deconstructed works of Chris Santos.  The tastes were that of a salad – fresh and crunchy romaine and rich Parmesan in a parsley pepper puree of sorts. But on breaking open the steaming Twinkie, the true goodness emerged. 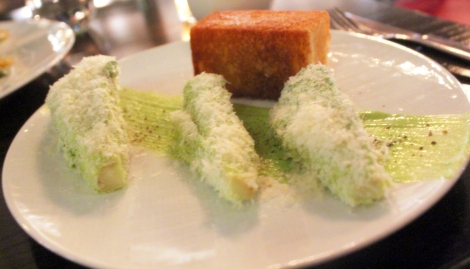 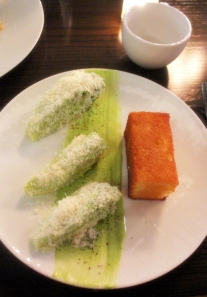 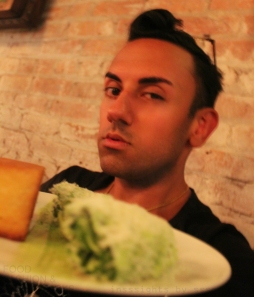 The creamy mascarpone looked like it belonged in a molten white chocolate eclair, but was as sumptuous and savory, truly contrasting its own appearance and deceiving my eyes. Meanwhile my mouth did the antithesis of talking, and blended the depth of flavors, trying to discern garlic from pepper from cheese. It was an inventive deconstruction, possibly one of the most successful I had ever laid tongues on. 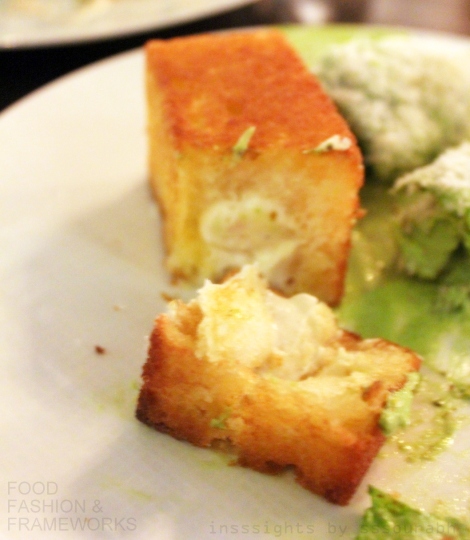 Saving just enough room for dessert, given the two indulgent salads, my expectations were mountainously high. 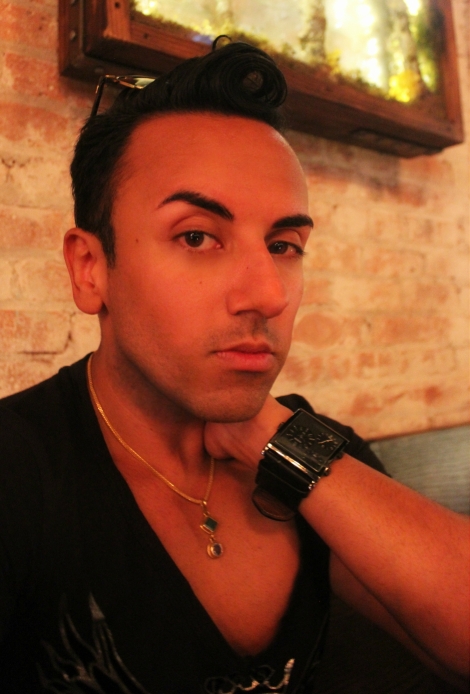 What arrived, oddly enough, was yet another deception of sorts. It looked like a grilled cheese sandwich, complete with oozing cheese! 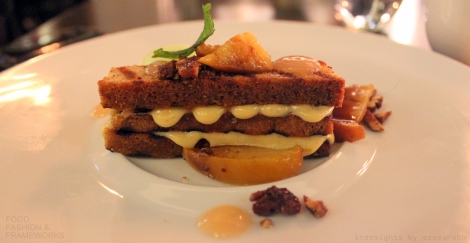 While I had obviously ignored the oodles of fruit and the ice cream literally hiding behind the sandwich, the scent gave it away. A strong, luscious scent of warm cooked peaches, my favorite of summer fruits. What I had was a pound cake with pecans, peach pastry cream oozing out from layers, all steeped in sweet tea, with mint ice cream and crunchy mint bits. The combination was unusual, for I did not anticipate mint to appear with warm peaches and luscious cream, nor did I anticipate my British rooted tea to cameo in this dish. But as expected, it worked. 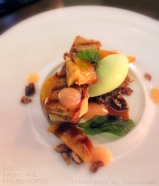 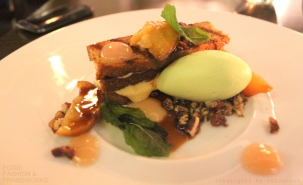 The peaches added a citrus element, which was offset by the undertone of sweet tea – or what I anticipated to be its flavor, given the otherwise well textured and almost vanilla cake. The crunchy and creamy mint textures added a coolness to the warmth of the cake, brought together by the toasted pecans drenched in caramel. Thankfully, it did not get saccharine or cloying as there was always the mint or the peach to tone things to a palatable level. The sequence of eating this deconstructed dish mattered, and it was only when things were scooped up and mouthed in complete bites that I got a full taste of a well balanced, deeply flavored and richly textured dessert. Isn’t that what the success of reconstruction means? 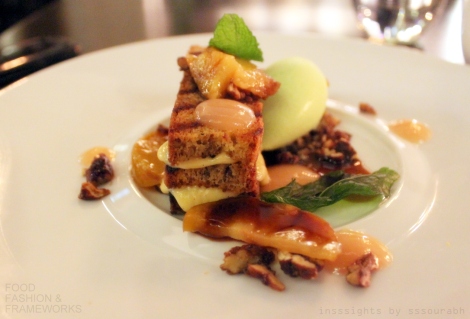 With a reaffirmed love for gastronomy, deconstruction and deceptive bites, I waltzed out into the sunset, wondering if in fact, it was a sunrise.

13 responses to “A Meal of Deconstructed Dishes and Delicious Deceptions”