Ecstasy reigns supreme when my passions of food and fashion fuse with such ferocity that even the crackling lightning sounds like mere static.

Yes, this is the epitome of my obsessions; fashion models dressed in chocolate. The Chocolate Fashion Show.

The Chocolate Show honors the creative zeal of chefs and culinary artists by allowing them to ooze their creativity over the bodices of models and minds of hungry eaters, as they combine with designers to create wearable chocolate. Whilst perhaps not wearable, and logistically hazardous – picture high quality milk chocolate melting on body heat, or the incessant buzz of a wasp family seeking its holiday dinner – this is one mouth watering dish of eye candy that everybody ought to toast their eyes on.

So while the actual essence of the chocolate show and its numerous brands, chocolates and tastings have been reviewed separately in mouth watering splendor, an ode to chocolate fashion is promptly necessitated.

Chocolate fashion has intrigued me across the years. It is a delightful concept, to cake a succulent looking model in layers of chocolate, avoiding the temptation to take a bite.

I have often wondered about the practicality of this. Recall that the goal is not to have a seductress with muddy chocolate smothered over her, but rather an actual outfit constructed primarily with chocolate. Body temperatures are at 37 degrees

centigrade, at which chocolate can well become sludgy. And a matching hat and shoes evoke images of gooey hair strands and chocolate-turned-syrup squelching beneath toes. Thankfully measures are taken to prevent such catastrophes. With that said, my expectations have dampened across the years on realizing that the majority of the items touching the model’s skin are actually fabric, coated in chocolate thereafter. Or sometimes, a tootsie-roll like consistency of chocolate leather is used, which lasts longer, and is also edible, as tasted by media for verification, right off of a model! Its no wonder that the model felt strange, not only for her edible coverings, but because the ladies were chewing on something that had been in many places before the body. So much for evoking vivid imagination!

Nevertheless, the outfits are frequently inspiring, always tactfully held together and evidently difficult to carry off. I have graced the catwalk before, particularly in the media hoarded provocative and artistic Parisian versions, complete with models tossing chocolate from their outfits into yearning fingertips!

The New York theme this year was to celebrate ecology and nature, and more specifically, saving the oceans. The outfits were thus more ethereal with soothing oceanic vibes and smooth nature motifs, a sharp contrast to the gaudy, sharp and angular superhero theme of last year when I graced the Parisian Salon du Chocolat instead. Though I gave the show a subtle skip, the seemingly precarious but remarkable display on mannequins was perhaps a greater challenge to sustain across the populated hours of the day.

My favorite was a blue ocean inspired piece, with georgette fabric laced seductively around the midriff and hips. Although I could do without the chocolate splatter on the skirt, at least it was not on the fabric that was elegantly slipping away from the cleavage section. Everything else was easily ignored by the giant milk chocolate shells that embellished and supported the bustier in sitting still, with darker chocolate shells eying the twin curves below it, drawing prime attention to the midriff – definitive eye candy for both men and women alike! A humongous and intricately detailed chocolate conch shell crown and a pair of goblin wings literally dripping with dark chocolate made this outfit ethereal. And whilst I was too distracted by middle proportions of the outfit, my comrade in food and fashion pointed out the white chocolate caramel shoes with a dark chocolate stone placed centrally, which effectively made the ensemble fit together almost dreamily.

Another favorite was the chocolate equivalent Monroe outfit, complete with a detailed corset garnished with chocolate pieces in shapes of leaves, rosebuds and acorns, embellished with a gold sparkle that reminded open-mouthed gapers that this was a fashion item, not a plate, and thus to not eat off the abdomen. The upheld fabric and paper skirt had a glitzy and flattened world map, complete with sparkling lands and oceans, that was however easily ignored by the chocolate mesh that acted both as a mood-breaker and functional support, speckled with a few more strangely shaped chocolate pieces. Possibly the most challenging to construct, and one of the fundamentally chocolate-centric ones in the show, this was a spectacle.

I would imagine the frozen Monroe pose to be awkward to carry off, but despite looking uncomfortable, the model was surprisingly calm and undisturbed by the choking corset (ironically and probably made of saturated fatty chocolate!) and a blown up solid skirt. It truly conveyed the inter-tangled themes of chocolate, nature, beauty and worldliness quite well.

I spotted two outfits that I enjoyed due to their simple, yet clever use of only dark and white chocolate, reminiscent of windows in stores like Club Monaco and White House Black Market. My favorite comprised of a 70s style diagonal ruffles technique in alternating dark and white chocolate, and seemingly difficult to construct but enticing to look at. The texture of the ruffles looked smooth  and decadent, simultaneously chocolatey yet fabric-like, an enviable accomplishment. The ensemble was complete with a golden ribbon belted around the waist, personifiying it as a modelicious gift for a lucky someone. A

detailed ruffled clutch and a simple skull-hugging chocolate headpiece completed the outfit with an applaudworthy finale. Probably one of the most wearable outfits in the collection, its no wonder that the model on the catwalk looked at ease; the only thing that may have given the choco-essence away was the salivating scent of chocolate she exuded!

The second outfit in the dark-white fashion series sported huge, thick leaves in both chocolates, falling gently down the shoulders to the waist, complimented by vertical slabs aligned down the skirt. The petite bonnet made of milk chocolate was a fitting touch. Very neat and plausibly difficult to construct, it left lip-licking viewers with fingers that itched to pluck the thick chocolate leaves off the model. My only gripe with this one (and a few others that I will unveil shortly) was that I felt the designers had chosen to let the fabric lead the way in terms of basics. It seemed as though they were first dressed in fabric and then had the chocolate applied to them as deemed practically appropriate. Perhaps a routine process for every designer, but it would have been great had they spent more time to complete patching up the fabric with only chocolate, thus relaying a lingering effect.

Being fond of all things green, I was naturally attracted to the green costumes, though one very clearly stole the limelight from the satisfactory second piece. The one I bit my lips on was blanketed in what looked like a cobra made of marzipan, and with strategically placed butterflies on the breasts, dragonflies on the shoulder, all complete with chocolate bodies and noticeable features, altogether complimented by a milk chocolate tiara on chocolate dyed hair. It was the perfect way to combine animal instinct with lust for chocolate. The effect  fell apart on the catwalk, with tacky, hand-smudged looking designs and a distraught looking model disenchantedly holding the python like a poodle. Definitely a gown that looks better with the stillness of a mannequin. 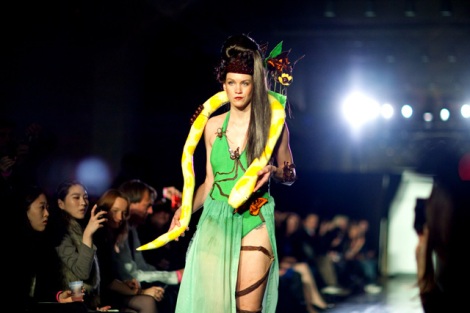 Comparatively, the clearly effortful and dedicated piece on fall leaves and green fashion seemed tackier, looking more like a finalist in an ornate paint-and-glue-crafts contest. This was perhaps due to the lack of brownness which so readily distinguished chocolate from non-chocolate in competing attires. Admittedly the ruffled skirt was caked in chocolate, but

hidden by the carcass of cutout vegetables that stole from its delectable sheen. It was very artfully done too, but as they say, you must not only do better than yourself, but also better than the competition. This was more so the case with a summery blue outfit, which seemed very wearable had it not been made of chocolate. Very symbolic to the oceanic theme with a neat story to tell, it however seemed to be made by juxtaposing multiple colored chocolate and material slabs. The look unveiled a pleasant summery gown, but drowned the essence of the fact that the construction material was chocolate; which I felt was one of the most important aspects to retain when treading on the path of combining food’s glory with fashion’s passion.

One ensemble in which the lack of chocolatey color was clearly overpowered by the dramatized three dimensionality was the sunny outfit, which literally demanded the use of sunglasses. Peering down at her awestruck crowds like an enchantress, the outfit itself was complete with a witch-like cast sporting a sunny vial on one end (made of white chocolate), a tantalizing blazing twin sun bustier and a magnificently constructed orange and yellow colored chocolate headpiece on bright copper tresses. Gasp-inducing, this one momentarily made one forget about chocolate, but its chocolatey chunks and stable posture acted as a subtle reminder. Clearly, it proclaimed a successful tactic to overpower the chocolate-love quotient – “be dramatic”!

The theme with this design was obviously the sun and its power over all things related to nature. So naturally the model strutting in it bore a heavy responsibility, literally, as observed by her pre-catwalk teeter and multi-person support. The positivity and grace with which she pulled it off was marvelous. Though I would be wary of the highest sunbeam melting too close to a scorching spotlight!

Evidently intrigued by the haute (no pun intended) chocolate fashion culture, a peek behind the curtains of the armor-themed show gave an enviable account of the laborious, diabetic and slippery challenges that designers and models alike faced in creating something so unique, fun, and highly anticipated!

Finally, whilst not directly wearable or related to fashion, the expressive sculptures still earned a pedestal amidst exquisite creations. These were were created over hours spent ogling and carving solid dark chocolate chunks to create expressive mortals that told stories of faraway lands. Swedish origin brand Fika Choklad, besides providing a host of spherical indulgences, arranged for the founding artist to create sculptures that were a stark contrast from the happy, yuppy and fast-food world of chocolate. From a ferocious wolf trampling over the body of a deceased Red Riding Hood, to a fallen angel, and disgruntled goblins to a horrific clown, these evoked an uncomfortable, disturbing emotion, which however did not deter them from being alluring.

And here concludes an annual recount of an earth shattering fusion that arrives painfully slowly, and ends in a zap. Yet the effects linger for a long while. Truly, being draped in chocolate is the new fashion mantra.

Second by second, minute by minute, hour by hour, my eyes absorbed the bodies wrapped in chocolate that I could still taste on my tongue.

The electrifying crackle of food and fashion had never been so intense, nor as rewarding.

See you there next year.