out this overpriced burger place, outside a Jersey Mall,” said a food companion. “Bobby’s Burger Palace“. Many things were simultaneously appealing and appalling about this suggestion

. My mind was abuzz with clashing conversations.

Burgers for a vegetarian? Blah.

Outside a Jersey Mall, blah crowd.

But inside the Mall, rejoice for shopaholics!

So, off I went, outside a swanky mall, where the red, orange and green logo of BBP hit my sunglasses like a jolt, reminding me that gourmet “junk” food has definitely been trending for the last two years.

What was shocking was that for being a famous chef’s restaurant, this one was self-service. Though it made up for it with it’s well lit, jazzy and psychedelic twisted swirls of seating, a pleasant change from the bricklike ‘watch-your-back’ seating discomforts. The walls were sparingly struck with zoomed-in ingredients, giving a healthy vibe to a burger joint – a marvelous achievement indeed.

Naturally, my displeasure at the lack of vegetarian burgers was inevitable. Really, Bobby Flay? It’s not too difficult to have a bean burger, or even a veg patty. 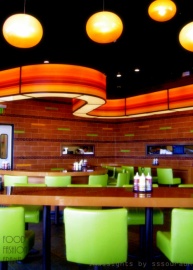 Nevertheless, the burger names, inspired by classic US cities and encompassing associations and fame factors from these, were interesting to read. My favorite, which my companion ordered, was the Napa Valley Burger, owing to the goat cheese, my favorite due to its tangy freshness and lack of odor, alongside lemon honey mustard, where the sweet and pow-wow pungent flavors are in perfect balance. The Philadelphia burger could have been better as a cheese steak version, but instead had provolone cheese and hot peppers. And while I am not a fan of Dallas, it sounded delectable, with coleslaw (my long harvested grocery

A large sign demanded eaters tp do the following:

Bobby reminds you to get your burger crunchified.

Well, besides evoking the ghostly whisper that Bobby was conversing from the air behind you, the tone here was a clever way to charm heavily-shopped-eaters into feeling like they were at a slightly more upscale burger joint. As for the message itself, and with an affinity towards all things crunchy (even more so than them being juicy, tender, soft, and melting), I was curious to see what this crunchifying embodied. Besides an inventive verb play, it simply meant including pressed potato chips inside the burger to evoke an inspiring crunch and an inevitable aaaah.

The burger plate was quite neat, with a burger and a slice of green, immediately distinguishing it from overly saucy and greasy servings. The sesame seeds added texture, as the colors gave it a more summery, fun color than that expected. The burger itself was tall, casting a mountain-like shadow on the twisted table. Crunchfied indeed, for it had the chips protruding from its belly, giving it a creative, prickly look that looked astounding and sounded even better, especially as a co-sitter next to a happy eater. 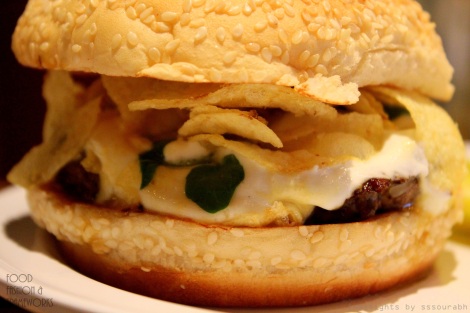 I ordered the crunch salad, keeping with the crunchy theme. It arrived with Romaine cheese, crispy tortillas, white cheddar cheese and a tangy balsamic dressing, all heaped in a pyramid of greens, chick peas, beans and oh so much more. It was not the best salad I ever ate, but delectable nonetheless, especially with a dose of the jalapeno sauce, taking things to an all-time high of spice that demanded a milkshake. 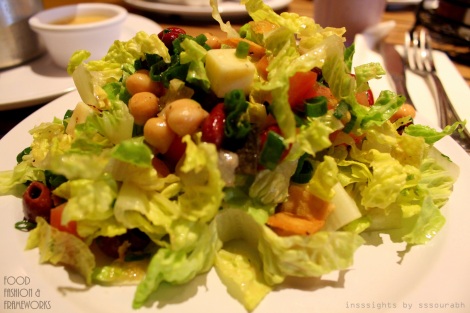 Speaking of which, there was an alarming array of shakes, ranging from dark chocolate and vanilla to mango and coconut. I obviously chose blueberry=pomegranate, the latter being my favorite fruit, and my favorite flavor ever. When I say ever, I mean ever – I think that pomegranate (alongside grapefruit) is my best palette cleansers and post-dessert life saver. I tasted both the blueberry and pomegranate, though I could have done with a brighter colored shake; what I got looked like a butterscotch chocolate mix, totally lacking the sensual red of pomegranate. 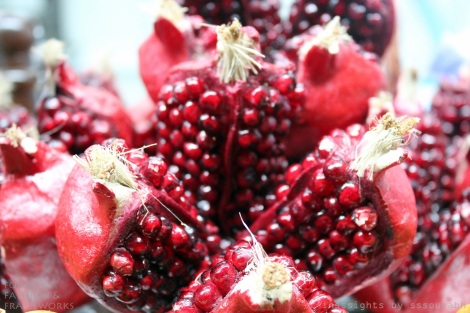 For conversational sake, and because we love potatoes, we ordered fries. The regular fries were fairly… well, regular, though several notches above others owing to their crispy exteriors caked with chunky salt. However the sweet potato fries were a pathway to heaven – sweet, and so radiantly golden red, glistening with pearl-like salt granules.  And the dipping sauce, a honey mustard horseradish, was the perfectly accomplice to the sweet and salty fries, with the feisty mustard punch balanced by the fibrous horseradish texture and sweet honey undertone. It left me dipping my fingers into the sauce and licking profusely, hoping the others wouldn’t notice the emergence of an inner child.

Overall, it was a mixed experience. It was a meal that I would not necessarily classify as high end, nor exquisitely formidable looking, but definitely notches above regular fast food, with an undertone of crunchy creativity, and in an ambiance that was whimsical enough to evoke never-ending conversations with fellow food enthusiasts.

And now I can kind of say I’ve done fast food. Kind of.

3 responses to “Conversations in a Burger Palace”