The future ticks past us as the present strides forward.
There is little we can do really, but watch.
Watch the watch as it ticks forward.

Many designers, enthusiasts, geniuses and creative folks have tried to encapsulate their vision of a future that has not yet arrived. And given that I probably fall into one of these buckets, I am fascinated by the plethora of objects, foods, and fashions which tell me that that despite being so up-to-date, I am still one step behind. Behind unraveling the unknown, which is so temptingly close and alluringly hypnotic, but simply one step away.

This alleged extra-terrestrial feeling gives rise to a fourth chapter of out-of-hand observations, which encapsulates things that are faux pas, perhaps a step beyond a fashion camouflage, and perhaps even a new dimension of distress. Yet above all, these out-of-hand observations juxtapose today’s wildly racing life with that of a rapidly arriving tomorrow.

I have always said that the world feeds your eyes, daily.
Now, I feel that your eyes need to seek out what to devour. Daily.

The Words of Time

Time has always been my foe. For years, I have switched the hands on my clock to tell me a time distinct from where I am, mainly to dream, or sometimes to dream of being on time to something. Feeling my anguish, a fellow blogger showed me the award winning Qlock by Bigert & Funk, which simply tells you the time in words, prefixing the time with “it is”. Funky, after you’ve hat a moment to think. Actually the clock gives you five minutes to think, as it only displays the time in five minute intervals. While I admire the contemporary spin, which promotes the (languishing) art of reading, it frightens me with an omen of laziness.

Amongst the many things I am known for, one of them is never being on time. Yet, would I choose a clock attire over the watches in my dresser? Beijing designers, one of whose close buddies pointed me in the direction of these fascinating works of art, have embedded clocks as a centerpiece in their eye-catching runway collections. Ironically, these prevent the the models from using their eyes. Using monochromatic hues of black and white alone casts a glossy look on beholders’ eyes, who instinctively checksto see what time zone they are perched in.

A Spinning Twist on Time

Suggested by a fellow fashion enthusiast who knows my obsessions and fascinations, the white watch (one of my new favorite colors for men’s accessories) spells quirky. For this Next edition has no classical hands. It simply has three rotating circles for seconds, minutes and hours, with a radar of a sort on the left to read the time. Not as easy as it sounds when you’re closing in on the hour, for it could read something as boggling as 5:60 at 4:59. Got it? I often still reach into my iPhone to read the time, but this one definitely draws the eyeballs towards its hypnotic design, and is a terrific conversation starter. Trust me, I sport it, and have tried.

Ever wanted to zap the laptop shut with Ctrl+Alt+Del? Usually we cannot, and the tech mess has us instead going to punch a boxing bag, or downing a shot of vodka, or more likely, gulping a cup of coffee for a caffeine rush. These inventive mugs that I spotted at a friend’s office enable you to sip up your delight and your angst all at once. They look impeccably keyboard-like while perched on your desk, too, and despite being handle-less, are completely functional. Trust ThinkGeek to concoct the nerdiest of functional things in a festive, funky and smile-inducing way. 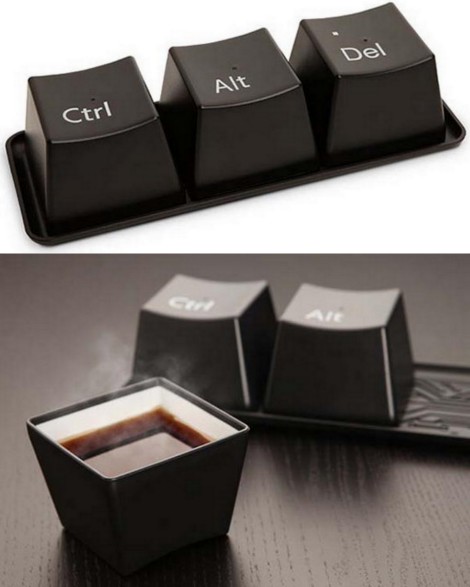 Picture a dapper man in a blindingly bleached and impeccably ironed white shirt, fitting trousers enhancing the thigh muscles, and reaching to grab his jacket. And plop goes a drop of chocolate. And you suddenly get a whiff of cocoa. It’s his chocolate cuff links, which look good enough to eat. And are totally edible, courtesy of Fulvio Bonavia. Of course, mimicked and gifted to me by a food and sssourabh lover. Bid farewell to a melting wrapper enveloping gooey chocolate in a warm pocket, since you can now simply sport your snack on your cuff. It puts a new meaning to the future of long office meetings.

Juxtaposition is one thing, but for an object to take on its own fire breathing life is one solid spectacle. On one hand this is a bracelet, and one which holds a deeply entrenched secret. For when it glows like lava from a fiery river, it truly holds the greatest power of all – time. And thus on the other hand, it is a faceless watch which tells you the time through a fiery orange glow. Technically, designer Hironao Tsuboi has created the glow from LED, but has camouflaged it in rocklike silver, making it ever so reminiscent of a knight in armor jumping over a river of lava to rescue his damsel in time (pun intended). As such, I call it an accessory which is spectacular for a knight. A knight of the future, that is. 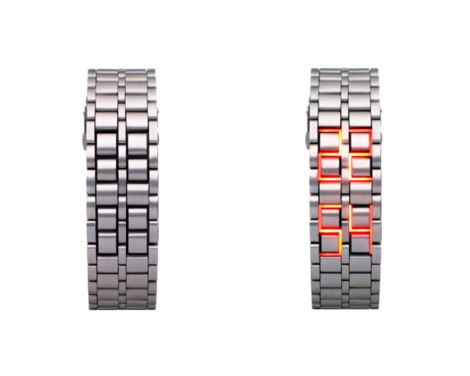 You read it right: presenting a Louis Vuitton trash bag. Paying homage to a day when even luxury does more than borrow from a philanthropic world, going beyond ideas and donations to utilizing waste in the name of recycling. Here is a handbag made of a trashbag, designed with stylish cuts and even a flap closure, but made of a somewhat transparent, yankably destroyable, yet claimingly waterproof exterior. Tagged at close to 2k, this is a Louis Vuitton friends’ least aspirational pieces, who almost passed out of disbelief when she saw it. Despite its green efforts, the combination of the luxury and pricetag make it quite the awkward juxtaposition.

No, this will not take you on a one-way trip to the dentist. These robot inspired cookies look so metallic that they would seriously make me abandon my love for classic looking, chocolate chip sprinkled molten and seductive cookies. Yet, they look so cute, enticing, and futuristic that I feel they totally belong in the iGeneration. Complete with a recipe, goggly eyes and all, the sheen is what beckons me to turn into Oz’s tin woodman to pose for a bite. Perhaps this is one of the favorite ways to preserve an age old heritage of soft baked cookies in future’s clasp.

Designer Gayatri takes from the filmy scenario of being caught in the shower by a certain someone. While nothing immediately futuresque, inventive, or zappy about this, its still quite a creative flair on the situation. So why not turn a shower curtain into a dress? While not plummeting down a line of fantasy with translucent peeks, it falls into a classy, conservative style outfit which looks functional for an outdoorsy rendezvous.

Masaya Kushino never refrains from making an appearance on out of hand observations. And this time, with a shoe labeled “reborn”, she definitely peeks into a less tech future where human and earth trod foot in foot. It looks like something Lady Gaga and PETA would jointly endorse. While definitely drawing eye rolling attention, it will probably draw accolades in all but one type of location: a grassy-green outdoor event, where the shoes would become chameleons.

And so ends a fourth installment of out-of-hand observations, borrowing a bit from tomorrow to present a bit of today.

Until next time, don’t just keep your eyes open, but seek out what you want to feed them.
Eating for the eyes and feeding the eyes is It makes a difference.

17 responses to “Out-of-Hand Observations 4: A Future of Juxtaposition”