I feel that it has become increasingly challenging to shop, contrary to what one may think in a so called modern and effectively efficient world. For the clichéd fact is true: consumer behavior is changing. In every company, divisions and individuals are coming up with research and theories and strategies on how to deal with the evolving consumer prototype. However, I do not think that the change is at all alarming. It is a natural, evolutionary change. In the same way that the earth has become warmer over time, our years start with the digit 2 instead of 1, and will sequentially continue with 3, 4, etc., in the same way that writing letters has evolved from slow snail mail to instantaneous email, or acceptable skirt lengths have gone from ankle length to barely there, a change in consumer behavior is simply evolutionary.

So perhaps it’s not so much the consumer behavior itself, but the source and shopping experience which initiates the change, which needs to be examined. Here is a vicious circle of a handful of elements that are changing a consumer’s shopping and product selection experience. This is not an all encompassing list, but still gives a few tips and interesting learnings for entrepreneurs and businesses, from the perspective of both a consumer and a producer, to put it bluntly. 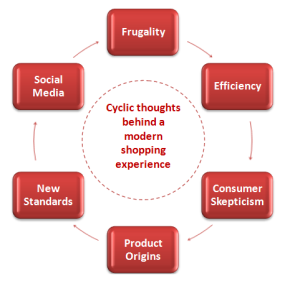 Frugality: I am powerful, yet I am frugal

The DIY (do it yourself) culture is a phenomenon that has overtaken the ready-to-order and ready-to-purchase behavior. While we used to prefer having things made and sent to us, somewhere along the lines the stamped on labor cost has begun to bother us. This, along with the need to express creative freedom and feel a sense of accomplishment after having completed a manual task has driven individuals to do things themselves. The success of IKEA stores is simply one example, but the flattening frequency of house help in metropolitan cities of third world countries shows how people are looking more towards their own powers and natures to completing given tasks. Frugality can be the other explanation for this, too, as individuals get slightly more sure of what they want, and how they want it. Businesses beware of the increasing know-how of consumers, and the increased pickiness, which unfortunately correlates with the increasing options that consumers face for every product they wish to purchase.

For some reason, we have lost the ability to enjoy various elements of life on a standalone basis. Efficiency has caught on like a buzzing bug. Why, if you can have a phone that handles email, text messaging, entails a GPS, can play movies and stream television channels, why have a laptop, a mobile phone, a portable GPS, a Blu-ray player and a television? It is the efficiency of one product versus many more, at a reasonable cost advantage and convenience, perhaps. But does it replace the joy of cuddling up in a couch in front of a television with a bowl of popcorn? I’m not saying efficiency is a bad thing, I mean the swiftness of checking in on an airplane (lets ignore the other associated hassles of traveling these days), or the practicality of an all inclusive printer/scanner/copier are definitely a sign of creative minds at relevant work. However, I think product managers, alongside consumers, have been taking the efficiency element too much out of reach from the human element.

Frugality again may be the cause here. Why buy six things when one can perform the same task? From an economic standpoint, it’s probably true. From a convenience one, depending on your adaptability to the sensitive touch screen phones, the response will vary. And we all ignore the satisfaction element of it. For when you have a 60 second microwavable meal, not only does the taste and nutrition compromise itself, but one also loses out on the joys of cooking and concocting an ingredient specific dish. Apt brand positioning is thus a requirement.

Every brand management course teaches us that consumers are vulnerable and, plainly put, stupid. But no more. Consumers are much more in control with what they wish to purchase. They re-evaluate choices much more accurately, counting the calories and checking the sugar and carb count on food items, reading the order of ingredients to ensure they aren’t being carried away; since when ingredients in cosmetics are laid out in order of most to least, it doesn’t give a strong feeling if water is the first one.  Skepticism has begun to creep into the frame, with consumers challenging claims and promises that are made by products. Perhaps this may lead to a rise in third party data and research, in addition to a consumer’s own swim through the murk. Frugality, DIY, efficiency all feed into this element of the cycle. Branded products thus must be offering a viable and sustainable value proposition that is well differentiated from the others in the flock. Fluffy, unvalidated, unrequired and questionable claims will thus need to make an exit.

Product Origins: Made with Care

Part of the skepticism comes from the origins, or processing, of consumer products. Blame it on the paparazzi, who like to sensationalize any flaw in a manufacturing process, such as the Tylenol recall due to moldy scents or trace chemicals, or the publicity around manufacturing of airplane food in infested areas. Or perhaps, blame it on ourselves, as we have caught on to the anti-bacterial bug, and constantly wash our hands with anti-bac soap, place a tissue before opening a public restroom door knob or faucet, or apply alcohol wipes to clean surfaces, or on our hands after  a public transit adventure. Besides the fact that we are consistently drying our hands out of essential oils and moisture (and of course, in this marketing driven world, there are products targeted specifically for drying hands and tearing cuticles), this just cements the fact that we are taking extra care in what we do, touch, breathe, eat, and overall, do consciously. Companies and brands are under immense scrutiny from story-lusting spies to mainstream consumers, who want multiple guarantees as to why things are made cleanly, clearly, and transparently. It is no longer an assumption, but a claim that requires repeated validation. So, businesses, watch out, for even the air particles carry microscopic cameras.

Now the important element of purchasing power: price. Discounting is everywhere. Every day our eyes are reading the four letter words that have become synonymous with shopping: s-a-l-e. It’s no wonder that the upcoming generations are swift at mathematics, what with the varying percentages off of full price, with extra percentages off with using specific cards, or the buy several and get several more free offers, it’s almost like it’s become a standard of shopping. And that in itself is a risk. Consumers often enjoy seeing the new trends and designs on models, stars, everywhere, but are willing to wait until they’re on sale. The sale price has become the new value. It is a self fulfilling prophecy of a downward spiral. Not to mention a competitive threat to mainstream retailers. It may not affect the retailers who support their ‘low prices – always’ claim, but those opting for fashion and lifestyle do not attend the big box stores either. It may not affect the premium brands, who claim exorbitant amounts simply for a small embroidered logo or metal placket on the edge of a pretty ordinary looking item. But these cater to a very niche market, less than one percent of the world. What this paradigm shift in shopping standards is bound to do is affect the mainstream consumers, the bulging and growing bulk of the world. This is the concern, which is leading to unnecessarily strange behavior. Is an item really on sale, could be one reaction, when a simple item seems exorbitantly priced even at 50% off. Inflated initial prices with sales prices that reflect what a retailer would actually want, for instance. Which again forms a circular loop of suspicion as a consumer wonders how an item that is marked $80 can possibly sell for $5, and starts to wonder about consumption habits and the ethics of a branded product. Fishy times lay ahead, and brands must stay alert.

Social Media: Lets Tweet!
And when consumers are comparing prices, options, promotions, another factor that comes into play is the rise of social media. There are too many elements in a product-consumer interface now. The human element has blended itself into the gap, and people are closer than ever to their celebrity endorsers and brand managers, reading their tweets instantly, which relays a message that these are no longer larger than life perfectly airbrushed bodies on multi story billboards; these are real people, with real thoughts, real problems, and real grammatical mishaps that occur when they type. Whilst this may excite many users, who get to know of what their brands are conspiring on a daily basis, it poses a risk towards the legitimacy and efficacy of branded products. Are businesses really getting closer to their consumers, or are they tweeting a different and perhaps misleading tune? Moreover, there are several myths around social media, including things like its ease of use, cost-effectiveness, and new-ness, all of which are rather false; it is difficult to sustain, definitely not cost effective, and while it is buzzing around professional circles, its not entirely too new. Combine this with the frugal consumer and the consumer skepticism, and you have an ongoing cycle of thoughts glistening with question marks. Although, hopefully social media is actually here to stay, for I do think the pros outweigh its hiccups. But then, we have always been oblivious to the bubbles of the economy until they burst. 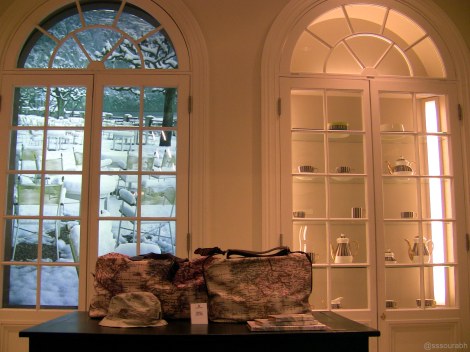 11 responses to “A Complex Shopping Trip: The Challenges of Consumer Behavior”