Pure chocolate does not survive beyond two weeks, said chocolatiers and Food Network experts at the New York Chocolate Show. Naturally, they meant two weeks after it is made, not two weeks from when it is purchased; consuming chocolate within two weeks of the latter is an effortless task. Networking amidst chocolate gurus in Paris, Brussels and New York exposed me to this fact, along with several regulations that exist around chocolate manufacturing. Yes, the tentacles of legislative trademarks and stamps did not pardon this delectable indulgence, too. I cringed at the realization that my favorite bars of Newtree, Cote D’Or or Chocolove XOXO, all the way to childhood favorites Snickers and Twix, which I bought in unthinkable quantities and clutched onto for weeks and months, did not fit the so-called pure chocolate category. With this in mind, I began looking into what chocolate contains, with subsequent and intriguing investigations on marketing and business trends for chocolate.

The findings for the basic regulations that limit the quantities of true ingredients were quite alarming, to say the least.

When we taste chocolate, our sigh-evoking indulgences are responses to the chocolate liquor (non alcoholic, of course, as the word liquor seems to evoke that notion; if you want to tread down that path, you’re looking for chocolate liqueur). This is the ground and, in essence, liquefied version of cocoa nibs, and comprises of cocoa butter and cocoa solids. Chocoholics with adapted or particular senses of taste do not care much for the milk solids and dairy, nor the sugar, both of which can be contained in any other sweet confectionery preparation too. However, as the findings suggest, to qualify as milk chocolate, it must contain only 10% chocolate liquor as a minimum, and at least 12% dairy or milk solids.  I personally find it slightly bizarre that ‘chocolate’ thereby betrays itself and contain more dairy than actual chocolate, if one obeys the minimum rule! Perhaps this is why it is named milk chocolate, as an ode to the namesake.

For dark chocolate (which also constitutes the lesser known sweet chocolate), there is a maximum cap on dairy of 12%. This explains why 99% cocoa dark chocolate contains little to no dairy. However, to qualify as commercial dark chocolate without any percentages on it, it must contain a minimum of only 35% chocolate liquor. Once again I find it boggling that more than half of what one is consuming is actually not true to its namesake – chocolate.

White chocolate is my most disliked of the classic chocolate categories, for I too fall prey to the notion that it is not ‘chocolate’. It does contain at least 20% cocoa butter (a derivative of chocolate liquor which contains the most fatty compounds, which is what is left once the cocoa solids have been removed, to make cocoa powder for the likes of hot chocolate mixes).  Naturally it must contain more dairy too, but at least it is truthful to its namesake and contains more of the ‘chocolate’ byproduct than milk solids. Interestingly, there is a cap on the sugar content at 55%, thus giving some but less play room for other fillers to play their part in the brew. 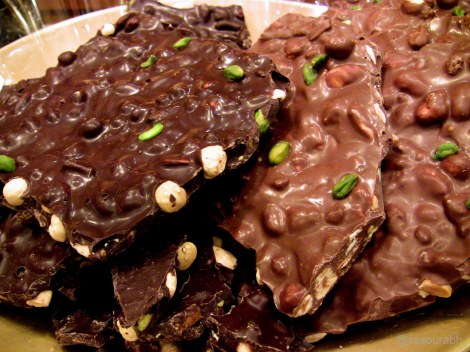 The ‘Other’ Elements of Chocolate

So what are the other elements in chocolate? Chocolate purists try to up the percentages of the necessary ingredients, filling the rest in with more cocoa, vanilla, nuts, sugar, or creative ingredients like texture preservers, rare spices, luxurious sweet fillings, etc. However, it comes to no surprise that such chocolate must be consumed soon after it is made, or within a reasonable time frame of a few days, or at most a few weeks. Why? Primarily due to the absence of preservatives.

The very same chocolate purists have often said that in manufacturing chocolate for the mass market, garnering business often supersedes delivering optimal taste. It is thus interesting and somewhat of a pity to note that some businesses may in fact rigidly stick to the minimum allowed quantities of chocolate liquor and milk solids, leaving playroom for several fillers and preservatives. The result? Low costs of ingredients and production, expanding margins for producers, and consumers happily chewing away on chocolate diluted with non-chocolate ingredients. So, with commercial manufactured chocolates displaying expiration dates far into the future, it is to no surprise that the ‘other’ section of chocolate must comprise of preservatives in varying quantities. True, these have antimicrobial properties, antioxidant properties, and can make chocolate last longer. Some even preserve the texture well, like soy lecithin. But wouldn’t you want chocolate that is fresher, preservative free, and contains more of the ingredients you actually wish to taste, savor and consume?

Whatever the case may be, chocolate is still one of the most fascinating finds in history, with credit for its primary introduction to the world going to the Olmecs, Aztecs and Mayans. It is my personal favorite consumable item of all time, very close to being an addiction to populations worldwide. While it has been praised as increasing serotin levels in the brain, maintaining blood pressure and having high antioxidant properties, chocolate has also been associated with being both a cause as well as a cure for depression, I myself cannot seem to pass a day without cocoa liquor tingling my throat. Subsequent articles and pieces of prose will still continue to praise my adoration for chocolate in all forms, structures, combinations and tastes.

Dark chocolate continues to emerge as a winner in gourmet trends and chocolate shows worldwide, with chocoholics praising the unlikely but increasingly plausible combination of taste and health. Higher concentrations of cocoa are also touted, primarily for consumers to notice the lack of ‘other’ elements. The trend of preservative free chocolates is on the rise, particularly touting the potential health concerns around preservatives. Chocolatiers have acted on the negative buzz around chocolate and mass production of it, and have initiated the introduction of educational material with their chocolate, attempting to promote the healthier aspects, languish the mysterious additives, and thus entice hefty purchases. Not a bad marketing ploy, for it does work. Furthermore by marrying the concept of divine chocolate with sustainable packaging and admirable social responsibility, chocolatiers have come up with a lucrative idea. Delectable and screen-licking photography further accentuates anyone lust towards chocolate.

It is however, a risky business proposition, since from a corporate perspective, creating large quantities of chocolate with a short shelf life agreeably does not sound like a smart strategy. Hence the everlasting debate of mass market chocolate producers versus niche creators.

Although corporate frameworks have chosen to monetize and profit from a tasty indulgence, I do not blame them, since some of them do a credible job of delivering tasty and quality products to chocoholics worldwide. The annual top ten chocolates and candy bars ranking truly reflects the worlds popular tastes, perhaps with a gentle nudge by the strong corresponding sales. Without corporate chocolatiers, as I like to call them, I would have never found soul mates in Quality Street or Cadbury’s Whole Nut chocolate. Yes, whilst chocolate purists may cringe, but I loved after the purple and white bars, and even more so after watching Cadbury’s viral marketing eyebrow ad. Marketing to children is a much debated phenomenon, particularly in the foods arena, but having been a child and zapped by confectionery marketing, I must say that it actually works very well!

This overview has definitely broken chocolate down into many pieces. However, it should not become a cheeky excuse to eat ten bars of milk chocolate in an attempt to defend oneself as having eaten simply one bar of ‘real’ chocolate. This is also definitely not a plight to convince chocolate consumers to switch to preservative free chocolate or suspect their favorite brands of dilution; it certainly will not deter me from trying any and all forms and brands of chocolate. Rather, it is an act of enlightenment to demonstrate that we need to be both adventurous, yet curious about what we consume, particularly if it is something we love!