I strongly feel that half a battle is won by a witty name. A name invites those who are ignorant, as well as your common passersby, or those dazed by the effects of a populated liquid party.

Has this aptly named article caught your attention? In which case, the battle is half won.

I have explored the essence of a strong name and its function in elevating and plummeting expectations. Having documented a perspective of an unsatisfactory name (that was a revelation indoors, though), it is time to explore the antithesis – an indisputably attractive name.

Despite having a similar namesake counterpart in the form of Naked Juice, the words ‘Naked Chocolate’ are more sensual in their pairing. My chocolate obsession aside, the pairing evokes delightful images of hot, melting chocolate smothered with more chocolate, slipping slowly like folds of sheer velvet. Other images are conjured too, but these are best left to your imagination.

Naked Chocolate is located in Philadelphia, and only in Philadelphia. Oh Philadelphia, a city with a plethora of culinary tastes, and so much more. A jewel on the heart of a map that needs dusting to unravel its kaleidoscopic addiction. It has an enigmatic charm that is so irresistible, which makes it stand out from the Londons and New Yorks and San Franciscos and Amsterdams. Something about its not-in-your face, quaint and laid back attitude is strong enough to hypnotize you once you are in its alluring tentacles.  Its uniqueness is akin to the leaning tower of Pisa amidst Rome’s other structurally symmetric monuments, or like a charming Aladdin amidst Disney’s more western offerings, or like the un-placeable extra ingredient that gives your favorite food an enchanting kick.

It is not like there is anything particularly distinct about the chocolate lounge, boutique café or dessert store, however one wishes to classify it. Even the online portal is simple and frills-free. Rows and rows of chocolate pieces in exotic shapes and sizes, with symmetrical crevices and embossments, often sprinkled with embellishments of colors. Neatly propped up paper labels exhibiting a creative name, often inspired by what lies in the chocolate’s core, or by a foreign land. The decadent chocolate pieces of art stare at you as you stare back, almost like the wondrous architecture of the Louvre. Tree-bark and log like slabs of chocolate lay lazily in the dim spotlights, enticing eaters with their grassroots approach in visual appeal.  Blackboards adorn the walls behind the counters, with hand drawn pictures and letters of available hot chocolates and coffees, giving the (overly used) natural and authentic feel. Tiny elaborate paintings assembled onto multi colored walls behind unmatched European sized tables and chairs and couches give it a cozy feel, where you can indulge in a decadent creation across the light of your laptop, or swap bite sized chocolate treats with your date on a tiny backless twin sofa. It is a curious place to just go for food gazing, as I have done several times, and the staff is friendly enough to not coax you into buying something, which, as the woes of consumer behavior may have it, makes you crave the chocolate constructions even more. There is so much more that is simply ordinary seeming. And yet, when placed together in the context of Naked Chocolate, it is so alarmingly addictive. 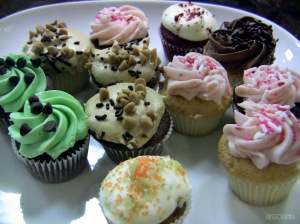 It is difficult to choose from the cakery bakery rows of items. Thick slabs of brownies drizzled with cherry, or solid chocolate cake with a snowfall of peanut butter and white chocolate chips. Or a large platter of cupcakes with comic book colored frosting and minimalistic sprinklings. These are a relief on multiple levels: firstly they are moderately sized, breaking away from the food disproportion evolution, and are distinct from some over-the-top cupcakes which taste like a bag of sugar on first bite. Whilst fresh and creamy to taste, another item in the baked family steals my vote with alarming ease, and continues to be my staple at Naked Chocolate.

Junk in the Trunk .

Junk in the What? With a plethora of subdued meanings, clearly Naked Chocolate has some mischief up its sleeve. Once again, its name beckons you to ogle it at the onset, with the layered visual that vertically assembles a jaw-dropping wall of my favorite ingredients. It is a square of layers of blondie, coconut, chocolate chips and topped with solid caramel. A quick request for a 10 second microwave twist melts the toffee pieces hidden in the crux, and allows for a gooier crunch through the heavenly wall of taste, where the juxtaposed ingredients hit the taste buds with a flirtatious pow! And the temptation to scoop up the crumbs and roasted coconut flakes at the bottom of the plate is tough to resist, since they retain the sweetness and longing memory of a delectable dessert that has already been consumed. 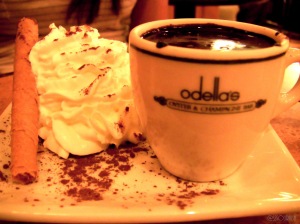 The hot chocolates give Max Brenner some tough competition with Mayan and bittersweet hot chocolate, my favorites amidst a series of thick aromatic liquids. Though my favorite is the Aztec hot chocolate, thick and dark and hot, with visible specks of cinnamon and spice tarnishing the glistening surface, albeit in a sepia renaissance type of way that is instantly gratifying. What makes it less filling is the portion size; it is mercifully moderately sized and not oversized like some competitors, thus allowing for sip-by-sip gratification, reminding me of my favorite Dutch snackery that I have shared my thoughts on earlier. I could do without the mandatory whipped cream flower on the side though. The wafer roll, although not distinct in taste, adds to give it a European cobblestone streets type of charm, perfectly complimented again by the dim lighting and cozy ambiance.

Although usually not a follower of chocolate pieces, a platter for sharing with chocolate obsessers is definitely the call of a rainy evening. Naked Chocolate is well known for the Louvre pyramidic triangles, called nudos. These are inverted brownies with frosting, in flavors of caramel, chocolate, peanuts, blondie, walnuts, and everything belonging to the mouth flirty family. Although not on par with Junk in the Trunk on taste, their quirky shape makes them an interesting consumption experience, starting at the triangular pointy corners and working inwards to the soft and warm core. A smaller pyramid solid is not as charming, but still quite tasty, with a sturdy solid shell that retains the shape but is also not difficult to crack.

The crown shaped chocolate demands immediate attention, as if foreshadowing doom by royal ancestors if it is not given a few seconds of a glance. Well, maybe not. But my attraction to royalty is unparalleled. It is simply a sweet ganache, without too many ingredients populating it. It thus makes up for its ordinary taste with a crowning exterior, a phenomenon noticed earlier in a Wonderland inspired dazzling bakery. Very clever, on multiple levels, both culinary and psychological. This is in stark contrast to the ordinary looking peanut butter and chocolate square bonbon, which has a smooth chocolate shell. Being a ganache, it is quite grainy, tickling the teeth but without too many sugar grains, which comes as a relief. The core is solid peanut butter, which requires slight gnawing, but makes up for the endurance with an invisible undertaste of salt that packs in the right punch to entice the taste buds. 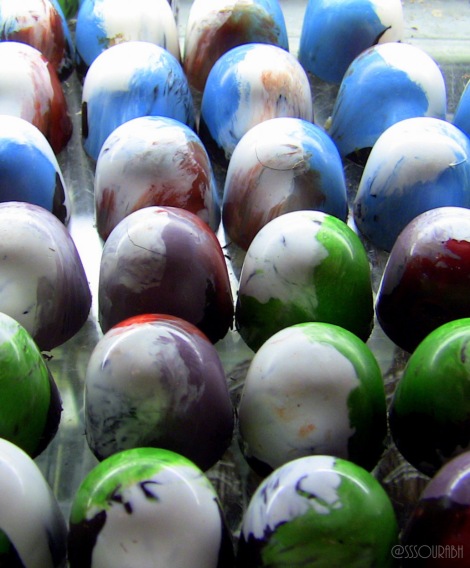 Venezuela inspired, these spherical chocolates were initially mistaken for hard candy due to the perfectly white and color painted sheen. But to my surprise, the shell was extremely thin, and fell apart like snake skin to reveal a smooth and creamy chocolate ganache within. Almost like a giant Smarties with a thinner shell and with higher quality ingredients, this was perhaps my favorite of all chocolate delights. The look factor definitely contributed to it, which, as I have mentioned in former obsessive writings about impeccably dressed foods, can be both a blessing and a warning. In this case, it made for a  finger licking indulgence – literally, due to its smooth creaminess that wrapped itself around fingertips. 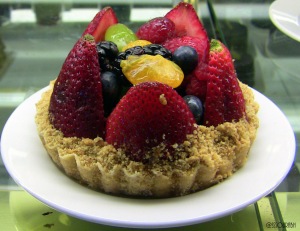 Although I earlier praised Naked Chocolate for not growing outside of Philadelphia, another form of diversification has bitten it. It steers away from its molten meltdown and into the arena of fresh smoothies with beach inspired titles like Birds of Paradise. Chocolate covered dry fruits bridge the gap quite well, though. But a fruit tart with pouting strawberries, however attractive, seems to clash with the sepia chocolate that borders it from length to length.

Founder Tom Block seems to frequently stop by one of the three locations to conjure up freshness in the glass-walled kitchen, happily chatting with chocolate enthusiasts while marketing the purity of his processes and infectious zeal for the family owned business. With all brands going the fair trade way with cocoa sourcing, Naked Chocolate ensures to pin this feather to the cap. The bubbling creativity clashes sharply with the friendly lazy atmosphere, which makes this a time warped wonderland that one can dwell in for long beyond daylight and darkness.

Returning to the provocatively named Naked Chocolate, I cannot help but wonder; does naked exemplify the purity of the chocolate, the simplicity of it, or the saturation of it in the café?

If the first, it is somewhat correct, although there is no brandwashing of purity involved in any promotional material. If the second, although the café has a grassroots marketing approach to interior décor, it is definitely not simple, and thankfully so, since the decadent spotlit chocolates are quite ornate.  So perhaps it means the third, a saturation of chocolate in the store. Though as aforementioned, this would have fit better if all the items contained chocolate: some cupcakes and the likes erode some of this thunder, although whimsical orange sugar and other disguises make this a clever branch out, too. Saturated nakedness can be forgiven for having a few out of place textures.

So, is Naked always a good thing? 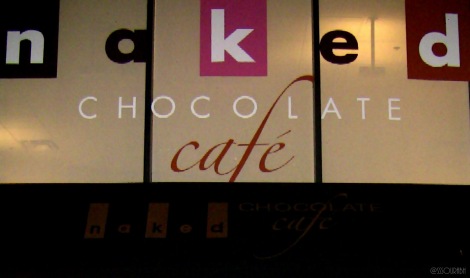 Its all in a name, and I am sure it usually is. When paired with Chocolate, it definitely is.