Country music and you?

Why not? Some people love to judge without getting the chance to know. Or by assessing based on a string of instagram stories. Appearances can be deceiving, and expectations can be misleading.

Which is why when I flew down to the jolly city of Nashville, many who knew me, or judged me, were rather surprised. I adore legends and histories, and being a travel addict, I believe that the quest of exploration is the most gratifying gift to the mind.

On the first night, I strolled down the legendary Honky Tonk Row in Lower Broadway, a breeding ground for performers, musicians, songwriters hoping to make it big in the legendary pages of country music. The streets were soaked in character, with everything from raunchy nightlife stories to depressed souls pouring their tales into drinking holes, and new love stories formulating at the tap of a beat. While distinct from my luxury seeking departures, the down-to-earth hangout scene was charming and alluring, with a casual and friendly vibe pulsating through the neon energy of the night.

On such a strip was a historic eatery by the name of Merchants. Founded in 1988 in the old Merchants Hotel, the exposed brick exterior walls spoke of all the tales they had witnessed on these streets. Formerly a pharmacy on the first floor, a hardware manufacturing company on the second, and a wholesale drug company on the third, a revamp made the casual ground floor a relaxed eating environment, complete with characterful black and white tiles speaking to the days of yore.

The second floor was more formal with a bar and a staircase mimicked around a musical instrument to add to the whimsy. Everything echoed the unique history and architecture of the place, where fame had rested in the European style fireplace hotel rooms and likely concocted more stories than singles.

With Jason Brumm at the helm of the kitchen, I was glad to see Southern staples of everything dunked and fried and simmering in liberal pots of sauce. To sip, I chose indecisively from the extensive and creative cocktail menu, selecting the Hemingway Daiquiri, with Prichard’s fine rum, luxardo maraschino, grapefruit and lime. It was the icy tangy drink, which despite being strong, was one that cleansed and prepared my palette to sing its own tune.

I started with classic deviled eggs, which came with a luscious whip of mayo and sat on what they called pop’s sweet and spicy pickles. While the eggs were not the unique factor, the combination with pickles was an addictive one, both texturally and in terms of flavor profile. 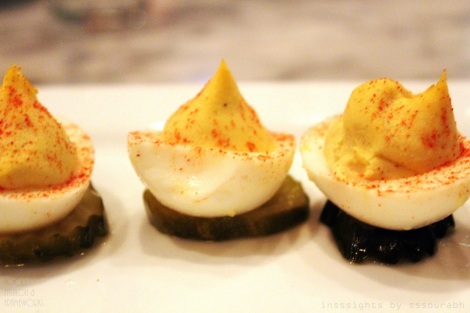 But my favorite were the fried green tomatoes. Considering that I had elevated tomatoes to a pedestal of their own with an entire Michelin plate dedicated to them as well as well as an iconic pizzeria putting them to the forefront, it only made sense for me to seek out a Southern staple.

These were in fact fried green tomatoes, a riper cousin of the luscious red ones. sliced fresh and sour from their ripeness, dipped in egg and coated with cornmeal, breadcrumbs and flour. These came with a spicy pepper jam and house pimento cheese. Reminding me of an Indian appetizer, these were marvelously sumptuous – the crispy bite on the well seasoned coating was a hearty one, which made way for a warm explosion of sour tomato juice, which when paired with the spicy jam was a flavor bomb punch in the mouth. What I liked was that I could still taste the freshness of tomato and pickles, which often gets overlooked with spicy cooking. 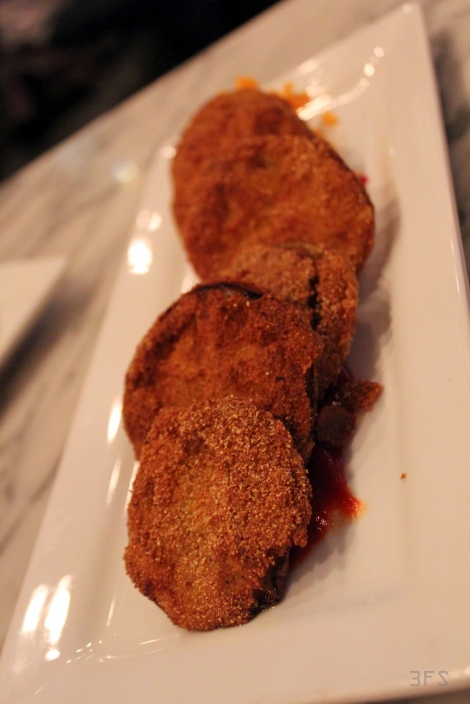 To complement the heavy bites, I got a strawberry salad, which had bunches of red onions, spiced pecans, a strawberry vinaigrette and goat cheese bits. While not as inventive, it was a fresh option. And given my dreamy affair with tomatoes, I didn’t think twice about it in the land of fried everything! Paradise for my palette.

The desserts options were to die for. Had I not made love to tomatoes, I would have inhaled all of them. But upon little speculation, I settled for the rum walnut blondie, with toasted marshmallows, creamy vanilla ice cream and caramel. With a penchant for blondies over brownies, this was a kids classic made for adult kids, thanks to the rum which I could smell alongside the warm baked goodness scent. Akin to a previous endeavour where Indian desserts had been upgraded with potent alcohol quantities.

And at quite large size, it took several mouthfuls to gobble, but was the kind gooey, nutty and warm texture that instantly took me down memory lane to being a kid and eating fresh ice cream on a farm with a homemade blondie. Minus the heavy dose of rum, which is probably the only reason I was thankful this wasn’t childhood!

And thus ended a first meal in Nashville, setting a high bar for more to come. And despite being in the Honky Tonk Central, Regina Spektor’s “I’ll come back, when you call me” made a debut in my mind, as I looked longingly at a happy, laid back city with enough charm to swoon me.

16 responses to “Fried Green Tomatoes in the Honky Tonk Row”