Temperatures soar in the summer. The sun licks my skin with its hissing tongue. The fiery air rekindles flames when it brushes through my hair. The simmering air mystifies my eyes, which seek a thirst quenching mirage.

When heat waves lap the surfaces of life, many take the opportunity to tan on silken beaches. Some nest indoors and concoct icy fruity ice pops. Others prefer to perch in air conditioned bars with minty mojitos. I, however, am ignited by inspiration to turn the heat into something tangible. I seek to substitute the perpetual envelopment of flames with equally ferocious and heat-inspired fashion.

This time’s Touch of Quirky series deviates from its predecessor that gave a taste of foody areas of pomegranate and curry, and moves into the realm of fashion. The cue is the sweltering summer, and the object is the fiery flame. 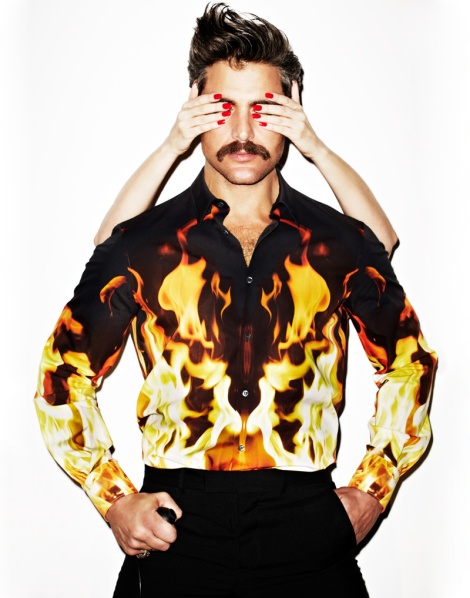 You could say this sexy shirt and the succulent red fingernails on his eyes spell out the mischief that created this fiery obsession in me. Canadian retailer La Maison teams up with photographer Douglas Freidman who directs Kirst Hume for the spring/summer lookbook 2012. Looks like they foretold a heat wave, on many fronts and for many senses, including satiny touch and haute visuals. The silky fabric is in contradiction with the ink-black smoked backdrop, which clashes fiercely with flames so cloyingly real that they exude heat, and create a sizzle for a long, dark season of sparks and ferocity. 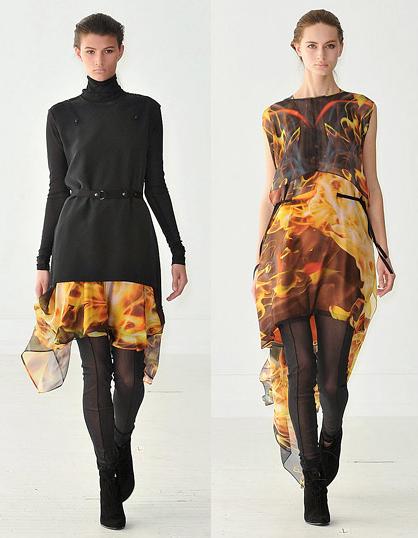 Flames sashaying down a runway evoke images of sultry seduction, scorched to a steamy degree. Dreams aside, the blackened backdrop of the flames adds to the mystique in this creation of Jeremy Laine. And the sheer fabric rustling in the breeze spells trouble for all those that dare look deeply into this unfathomable flame. 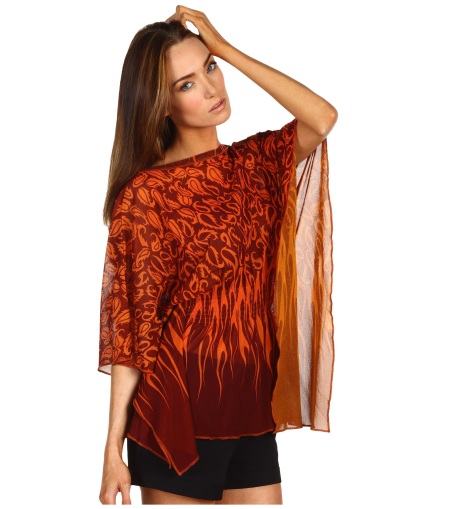 While not my favorite of creations by Gaultier, this one wins again due to its sheer factor. Cartoon-esque flames are not my cup of boiling tea due to images of kitsch crayon drawings that come to mind. Yet, the dual sided colors and breezy fabric relay an aura of enigma, which is always alluring. Pair it with skimpy short smoked black shorts, and you have a mischievous plan laid out. 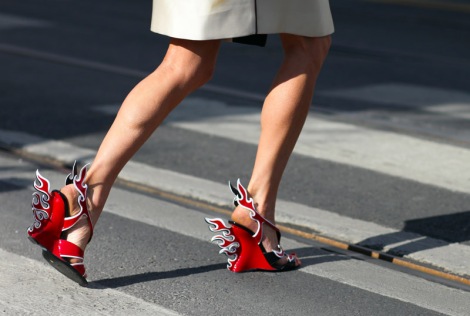 When these flamboyant heels by Prada hit Niemen Marcus earlier in 2012, they met with the love-hate reaction. They make a statement that looks less damaging than juxtaposed spikes and weaponry on shoes akin to McQueen or Kuschino. And while they may not tempt men in the way that the sheer flamed fabric does, they will make both knights and damsels look twice, and perhaps continue to stare. And follow.

A more contemporary and subtle perception of stepping into smoking flames is by Jimmy Choo. These suede pumps are detailed with red snakeskin leather flames that creep up an evasively naughty kind of way, retaining dignity and poise without the stiff boredom that usually comes with it. Definitely not as feisty as its counterparts, but probably a design that can easily fire up a heat storm in mainstream avenues.

A predecessor to Prada was the torched heel flaming up the derriere of Miu Miu’s candlestick shoes. Not as electrically flashy either, this one still stands on an omen of fire – a candle holder with a dangerously perched hook that could catch onto anything to create a fiery spectacle. It does draw attention as the flames lick the derriere of a leg with scrumptious fetish.

Yours truly steers away from fire clothing, but does admittedly blow out a plethora of candles before bedtime. Sneakily enough, I decked myself in bright dashing spurts of yellow on yellow on yellow as an ode to all things fiery, which can be viewed on Instagram, over and over again.

Ultimately, its about what inspires you about fiery flames and hot summer waves.
Here’s penning off with a red hot Marlboro inspired cowboy look, sweltering in the desert dust.

What turns you on in the heat?