I have often found it simultaneously enchanting and uninspiring. At times I am elated in its wraps, and at other times, deflated.

For where you have the gorgeous Notre Dame and magnificent gargoyles atop cathedrals that tell tales of valiance and adventure, you have steel structures like the famous yet tourist plagued Eiffel. 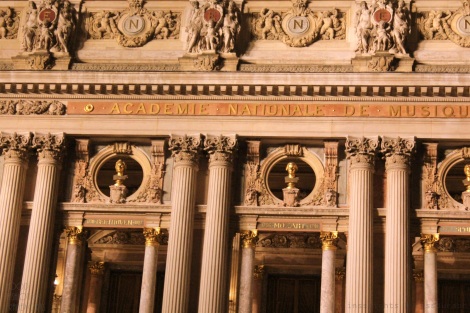 And where you have a culturally rich Le Marais for shopping , you have a sincere dearth of good cocktails.

Or so I thought, until I was escorted into this molecular and gastronomical cocktail invention house tucked in the shadows of the Opera House, glinting in nostalgic red light. The Patio Bar was an unassuming, seemingly ordinary lounge where the red light was so strong that I felt I was in an old fashioned photograph printing room, indifferent to the hues of the interior decor. I discerned the artificial palms with black branches (green and red make black) and brown plush seats (purple and red make brown), which were there to imitate a lazy-turning-seductive (yet frigid) Parisian evening. The gliteratti were opulently dressed, with playboy faced men in short fitted blazers and skinny trousers, and mannequin faced women in backless, legless dresses with a shimmer for leggings or earrings.

A friend of many common interests, and particular about her tastes, touted this as one of the best (and few) cocktail hotspots. And knowing my penchant for experimental, weird and quirky drinks, this was one tall claim. But one look at the drinks menu, organized by whimsical headings like experimental or molecular, showed me that Patio Bar was fit for my luxury seeking, ravenous appetite.

My first cocktail was chosen strictly because of my affinity towards one of its constituents: fire. Titled spitfire, it arrived in a scientifically oriented tall, cylindrical, pole-like vial, filled with dark rum, Campari and lemon liquor, which gave it a deep, lemonade-on-steroids kind of clarifying feel. Red spices lent it a pinkish color, which was probably intended as red. The best part was the bartender’s trick of lighting flammable, bubble inducing sugar cubes on fire before plunging them into the vial, where they continued to bubble like captive demons. 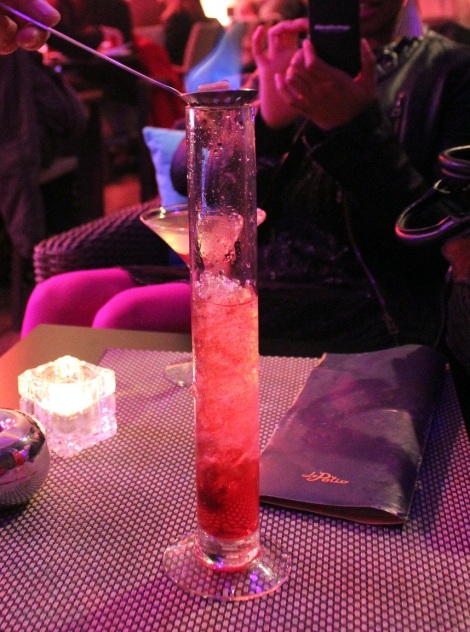 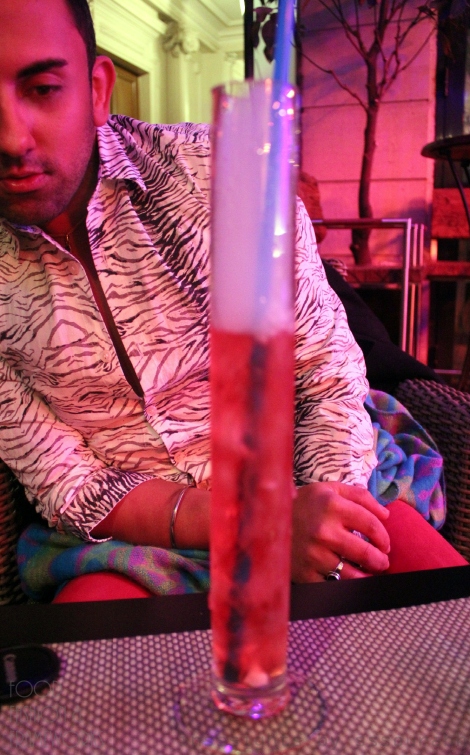 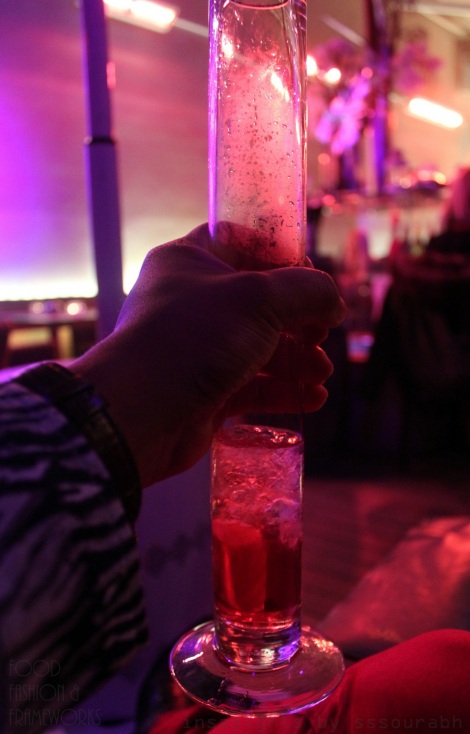 Although difficult to sip from, and not too terribly strong, the freshness and whimsy of the drink made for fun photography. 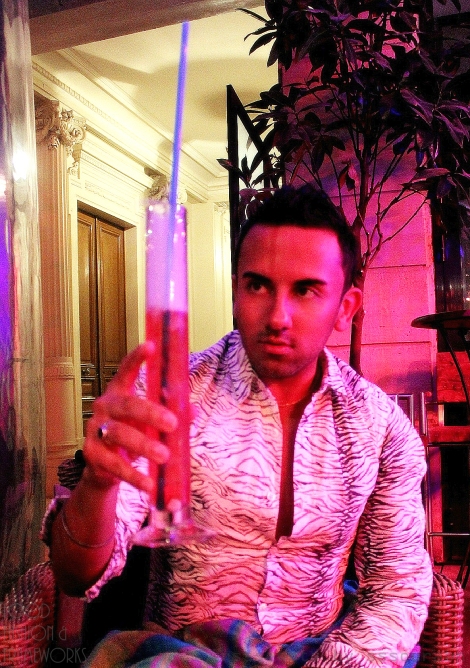 The leading lady ordered a Caldone, which arrived in a spherical glass akin to its primary fruit: the passion fruit. With Cachaça, lime and brown sugar to balance the toughness of ginger and pepper, this was a sweet and spicy sipper that reminded me of spherical snack-like street food in India (pani puri anyone?). The tangy and tart juxtaposition was as ridiculously addictive as a senseless childhood toy. And of course the open passion fruit garnish mandated a mouthful of gobble. 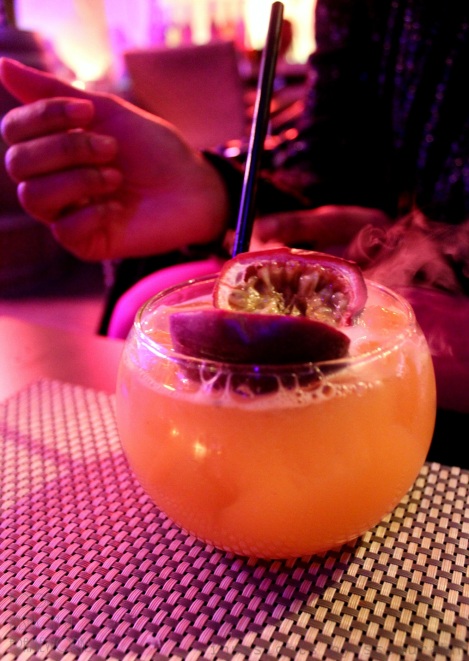 After the fiery drink, I needed something sweet, and opted for the Double, a desserty sounding concoction with fruit flambé wood cinnamon, nutmeg, lemon juice and vodka, all swirling in strawberry liquor with a poached garnish. The martini glass was festive, with a twisted stem, akin to the outline of the sail of Dubai’s Burj. But the drink itself was nothing unique, despite packing a strong, sweet punch. Something tasted rather overly saccharine and mainstream in this otherwise eye-catching, red attraction.

The last two cocktails were inspired by food. Obviously. The lady picked up a spaghetti cocktail, owing to a liking of the namesake. It arrived in the same martini glass with a twisted stem, rather un-Italian looking. Lemon vodka, green apple juice, agar agar and Cointreau gave it a sour, citrusy flavor, while the spaghetti itself was simply cranberry in a gelatinous form, puddled at the conical base of the glass, clearly visible as goop in the translucent fluid. Sure, it could pass as innovative, but the textural sliminess prevented me from over indulging. 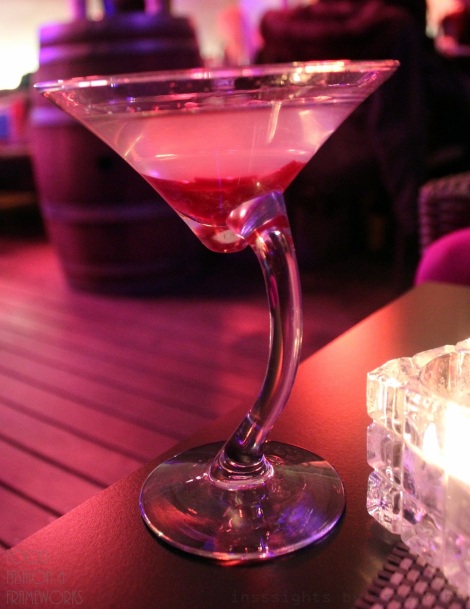 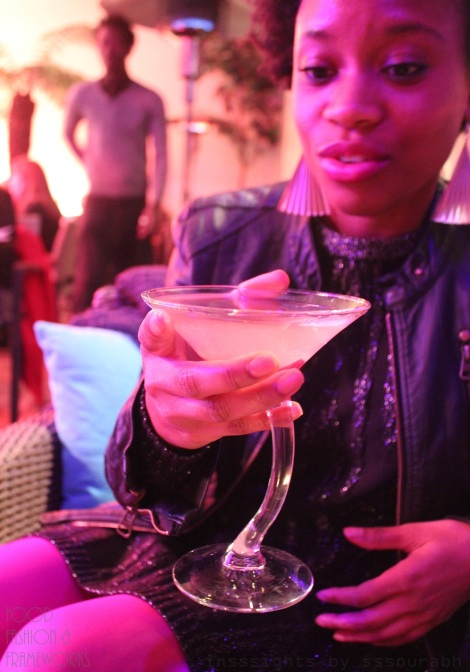 I concluded with a comical version of a Bloody Mary, which arrived in a soup pitcher and looked rather like soup, complete with cherry tomatoes and cucumber slices! While some would be repulsed by its unrefined demeanor for being a luxury cocktail, I found the vodka, Worchester sauce and tomato juice mixture rather refreshing, almost like a healthy cocktail! The Tabasco sauce, lemon and angostura bitters kept it on the potent side of the scale, preventing it from becoming something I would easily concoct for a morning breakfast or date-time appetizer.

After slurping the last of a series of experimental cocktails, it was fair to say that Paris had redeemed itself on the cocktail and culinary map. Finding the city more enchanting and inspiring, we poured back out into the rainy, lush night where the Opera House gleamed in the starlight, and our glazed eyes bounced off memories of a quirky evening. 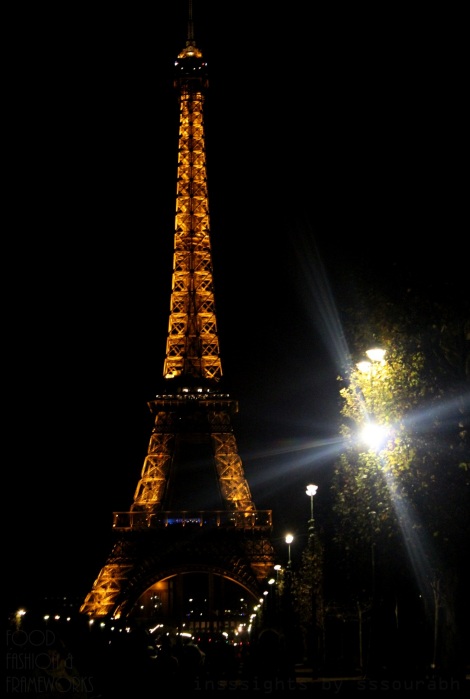 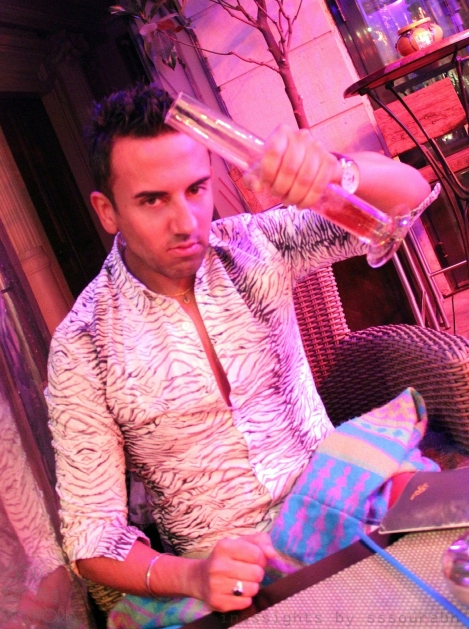 31 responses to “Cocktails in the shadows of the Paris Opera”