Just because dress and distress rhyme, must we stress ourselves to blend them? 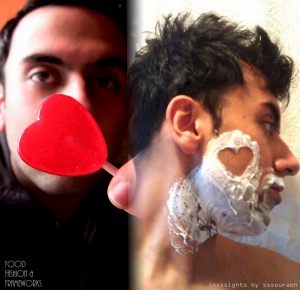 My endeavor to observe out-of-hand observations continues, after having seen some that are faux-pas disguised as forte, and others that are more obviously a fashion camouflage. An observatory streak that comes just in time for the beloved fashion week, kicking off with New York Fashion Week, Spring 2012.

Given that the world feeds my eyes daily, it is time to document another series in the intriguing chronicle.

The theme here is ironically one of distress, a concept that is simultaneously bizarre, unique and addictive. The love-it-hate-it-but-you-cannot-ignore-it stance applies to this list of items that yearn to be edgy, urban, uber cool, but sometimes go a bit too far.

Has fashion become a new sign of distress?
(Psycho-aiders beware).

The leg in Lego

Lego is a child’s fondest memory. The thrill of creating shapes, structures, models, of all shapes and colors, always returns and gushes through me when I step into Manhattan’s Lego store. Imagine my alarm at seeing a fashionista surrounded by a crowd, simply due to her Lego inspired shoes. A bit of rumor and a dash of research showed me that they were actually Balenciaga Lego heels, pricey designed and popularly constructed, even ripped off for less by Steve Madden (and consequently sued too)! Now ladies, what would you match this with, and what if a kid felt the need to pluck a piece off of it to complete a little truck structure? I know the word Lego has ‘leg’ in it, but this takes it mildly far.

Time and time again, I see friends with band aid camouflaged on perfectly spa manicured feet, wondering why they take on the pain. And then I hear of how terrible stilettos are for posture, inducing spinal problems and arthritis. So it comes as a shock why fashion would epitomize something so critical by creating a spinal heel, by no other than Alexander McQueen. Mentioned in passing by a designer bud, I was shocked to see these captured all the attention in Milan Fashion Week 2010!

Bones exemplify distress. Why else would Disney foray into skeletal jewelry in combination with Noir? It shocked me to see Gwen Stefani lookalikes sporting what she seductively displayed in a magazine, that too in upper clientele LA bars. Christened the Dinosaur Bones Pave Cuff bracelet as an ode to Fantasia’s 50th Anniversary’s Rite of Spring Scene, and assembled by Noir, the bracelet is more a feeling of sensual horror than a yuppy tribute. Encased in brass or silver, with a plethora of cubic zirconia stones, and a price tag close to a grand, it makes the wrist seem quite motinless! Eye catching, yes. But oh how it induces the “ouch, that must hurt” feeling.

So what do guys wear to clubs? It varies from the spanking business casual to the bold and sporty foil clad tees on a muscular stud, pants or skinny jeans aside. But John Galliano has a totally new vision for men, introduced to me by a designer. The absurdity varies from Gaga-like metallic underwear, to kitsch swords as hairpieces or placed in other unforgiving areas, paparazzi clad newspapers as blazers, recyclable cans and wires as oddly constructed headpieces and neckwear, bodices made of fishing net mesh in neon colors that would frighten the fish, mouse chewed crochet sleeves on cardigans, plastic face packs tied deconstructably and chokingly, Mad hatter hair gone awry, safety-pin facewear, 70s shoelaces used as accessories, and a tassel of hair-like strings covering the crotch in a suggestive manner. Not forgetting the gaudy makeup and metallic eyebrows. While the collection is a kaleidoscope of colors that is a breath of fresh air, potentially backed by calling many of these items recyclable, this torrential eye storm is pungent. While I could on occasion sport the button embellished waistcoat or the studded scarf, these are needles in a haystack of chaos. Really now, who wears these? 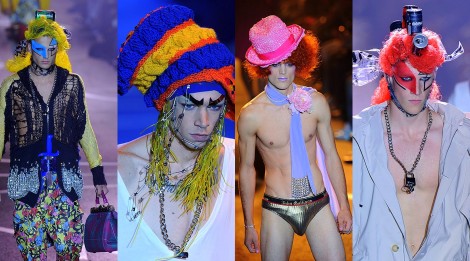 Eat to undress the distress

Controversially enough, one may find the consequential outcome of distress to be the lack of something – mental peace, belongings, clothing, etc. Extrapolating from this last point, I find South Korean artist Sung Yeonju’s food-made clothing to be simultaneously strange and mouthwatering. Whilst definitely not wearable, this is one out of hand observation that rises beyond distress to become a true work of inspirational art; inspirational due to the creativity, conceptuality, and effort put into it! She herself feels that her work destroys the meaning of clothing, which is meant to be worn. My favorites are the spring onion puff sleeved dress, where the curve of the vegetable so naturally allows for a puff, the red cabbage corset, which looks delectable enough to peel off of a beloved, and the white radish dress that reminds me of cute bridesmaid’s outfits! On my sans appeal list (and not because I’m vegetarian, but out of sheer grossness in imagining the texture of the foods on skin, and the odor) are two dresses; the out-of-shape chicken dress, and the fried egg halter dress. Despite the soothing colors of the latter, the close-up causes me to gag. 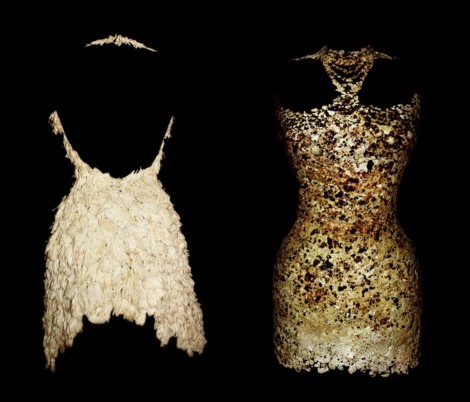 I first saw edible scorpions on the streets of China, caramelized and claimed to be super crunchy and high in protein. Thanks, I’ll stick to eggs and beans, and would rather skip the sugar dunked caramel. And now, at an East Coast airport no less, I see brightly colored lollipops alongside the other candy at the cashier, only to see a dead scorpion in one. And not just in one, but in many. And I this isn’t even China! As my stomach gallops to my throat wandering how so many bugs crawled into the confectionery stands of an airport, blanketing the thoughts of Snakes on a Plane coming to life, I notice that the lollipops themselves contain scorpions. “Crunchy” echoes the enthusiastic saleswoman. “And protein filled too”.  And what is distressful here? The poor caramelized scorpion, now in a wall of neon sugar. Who wants to look edgy gulping down a scorpion? And what about the poison that we have cringed at in adventure movies?  A memory never forgotten. Hotlix has made a living out of serving critters, and has even released an innovative ad for tongue piercings, depicting a vision of a dentist’s nightmare.

I saw this as a suggestion when looking for bathroom accessories on Amazon, and instantly grimaced. Definitely a lover of home fashion, I am always on the lookout for creative differentiators and all things offbeat. I am not the biggest fan of all things horror, but conceptually these do give me a psychological thrill. However, an angelic white shower curtain, with matching bathroom accessories, splattered with what my mom would call a bad ketchup job, is reminiscent of a fresh crime scene. Whether the goal of ThinkGeek is to evoke eeriness on a midnight bathroom break, or to start a day feeling petrified, or perhaps marginally seductive on seeing a nude body breathing its last – this is one design I’ll give a pass.

A food fan I surely am. But to utilize food as an accessory? I was most forwardly opposed to Gaga’s meaty catwalk, but now it seems that designers have transformed her desperate look into a permanent household fixture. Who would want a freshly plucked meat looking couch? The couch personifies relaxation, and literally stands for comfort. This one makes me cringe, and merely the thought of sitting on it makes me itch. 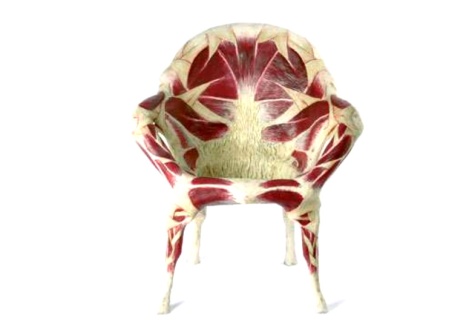 The strange thing about these pink doll punk shoes is not just the part-sneaker-part-winter-teddy hybrid, but its hefty price tag. Why buy something that, despite being a Jeremy Scott design, is so naturally a Made in Asia import mockup? Introduced to me by a friend who spotted these after viewing my previous out of hand observations, I have since seen many knockoffs in stores that carry everything from touristy tangles to nighttime viewings. 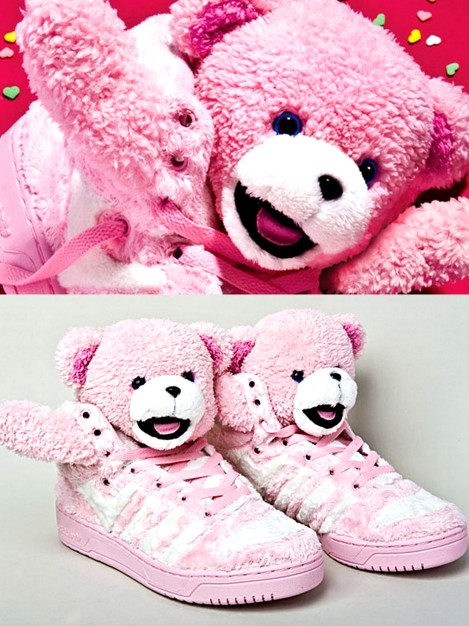 Sure, we crumple up paper in distress. The bigger the paper, or the more vengeful the anger, the stronger the rip, the more gratifying the feeling of using finger muscles to tarnish something that is ordinarily so flat and perfect. Great, but now why would one want to pay for a lookalike in a bag form? Saskia Diez has aptly christened this line Papier, with a detailed and clean looking assembling procedure. Something like this would either be tossed immediately by incoherent roommates, or perhaps be used as the trash bag itself for active parties. While a crafty idea, and evidently nicely replicated, I would utilize the talent for something more eye pleasing.

And thus concludes a new vision of distress, another chapter of out-of-hand observations.

While I feel that stress and distress add a zealous, addictive streak and persona to fashion, I personally find myself often frowning at the level of distress that is entailed. Denim is Dead and related distress is one thing, but the aforementioned observations formulate a new benchmark. From a grassroots approach, clothing is meant to adorn and protect, and accessories are meant to be functional. But if we all stuck to rules, life would be boring.

If you spot something totally fab, a fad, or a faux pas beyond belief, drop me a line, a tweet, or a message! After all, the more eyes, the more out-of-hand observations.

Enjoy, with your eyes, and swallow everything you see.

10 responses to “Out-of-Hand Observations 3: A New Sign of Distress”