Laziness is almost a luxurious way of life.
Like a  way of catching up on rest before getting tired of the world’s mundanes.
All over again.

You know that when you are with a fellow food critic on a winding road of wineries in Napa, the destination will be nothing short of a gastronomic spectacle. In Gastronomypix’s cute car, which we took turns driving as the other slept in a post wine slumber, owing to genuine Sunday laziness, we ultimately arrived at her recommended spot for a dinner to remember. 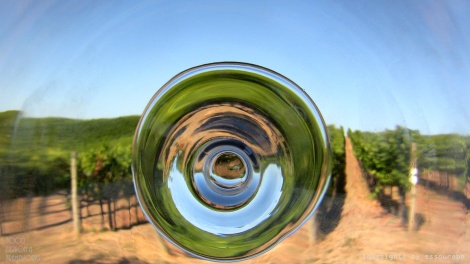 Ubuntu, a Michelin-starred all vegetarian restaurant, is a concept akin to a mirage in a wine ridden city where everything you look at can turn you into a grape. Its name comes from Zulu in South Africa, and it relays a philosophy of community based interconnectedness, placing it much higher in importance than individuality by stressing acts of sharing and generosity. Ubuntu is sans meat and fish, and vegans can even opt to keep dairy out. The menu changes monthly, and is typed up in a handy script with jarring all caps to clearly convey the items that are grown in the restaurant’s back garden, tying this back into the namesake philosophy.

The restaurant boasts of high culinary pedigree, where Chef Aaron London’s gastronomic spectacle is tasty and more importantly, visually addictive. Located in a restored building, its construction and rustic flair give a rustic welcome. Despite a long wooden dining table as the focal center point, we chose to sit by the long windows, where the blinds cast sliced light onto stonely textured walls with ethnic paintings in abstract colors. There was an open kitchen at the back, with what the waiter mentioned as a yoga studio upstairs. Our meal comprised of multiple courses, infused with textures, colors and an orchestra of tastes and visuals. 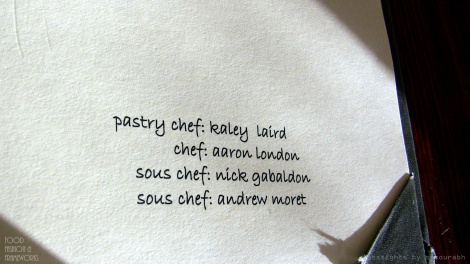 A brightly tainted long vial with a citrusy celery root and tomato juice arrived to quench our thirst after a day filled with sunny air, dry wines, and long drives on winding roads surrounded by grapey vineyards. The froth atop was slightly soap sudsy in texture, but the long, cold vial was inviting and relaxing. 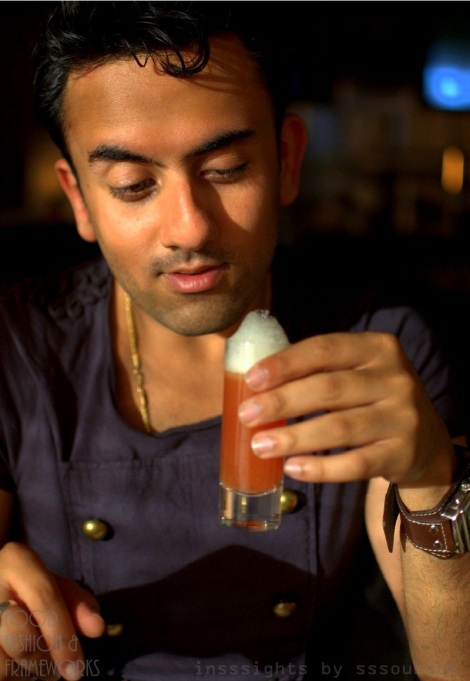 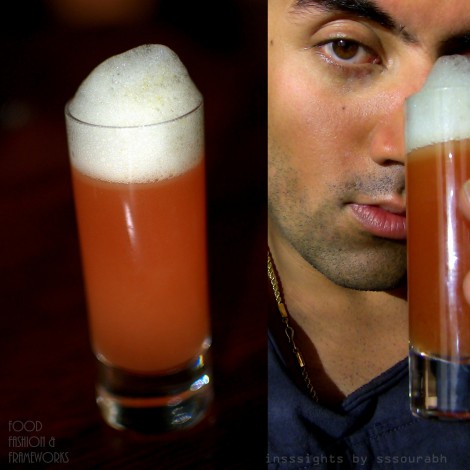 The appetizer was a soup of lake-like proportions, since it visually resembled an ethereal pool of coral and water, dressed with apt green finery, described as a dressing of greens, leaves, flowers, roots and herbs. The water base was an emulsion of vegetable flavors, starch and olive and truffle oils, some of which glazed in the light on the surface, making the entire dish look somewhat opulent. The heavy stoneware bowl-plate enhanced the earthy décor, accentuated by purple leaves and beet bits. A large lime slice added the right acidity, while a scoop of roasted peanuts gave the desirable crunch factor, while the aromatic flavor had a source in the forest of rosemary that had been dipped on the circumference of this well of delight. And my favorite bits were the miniature seedy vegetables that looked like watermelons in texture, but tasted like cucumbers! Pasted on the platter like dainty gapers, they added to the visual delight. 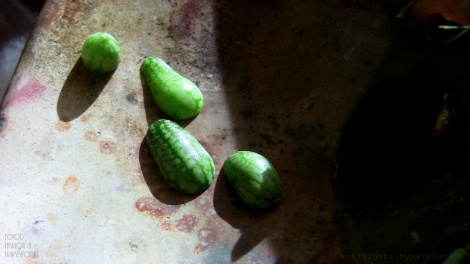 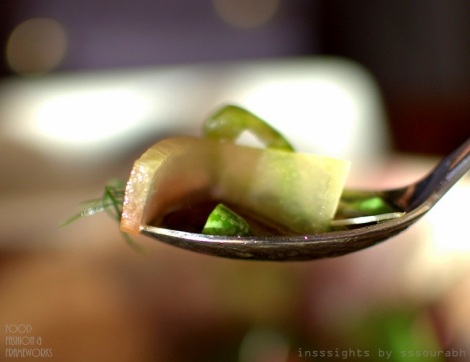 Despite the fact that our body’s wine content was higher than the water content after a day in the vineyards at Napa, we ordered dessert wines as an in between reminder and an ode to a joyful day. While not remarkably memorable in taste, with sweet sherry and honey tastes, the petite glassware evoked cute emoticon worthy smiles, particularly the white wine whose vial looked like a rosebud ready to bloom, or a seductress in between two nights of splendor. When paired against the reflective setting sun, the hues soaked us in jolly moods and inventive splendor.

Our solids arrived to break the liquid day with a succulent surprise. As if paying homage to my out-of-hand observations favoring all things in disguise, the corn platter was actually petite spheres of pasta, doused in a creamy peppery sauce and spinach. The textures were broken by boiled potatoes sans salt, which gave the plate a profound, pure taste, especially when supplemented with goat’s milk whey and a tasty parmesan and mozzarella cheese blend, grated so finely that they added ironic depth to the shallow, simple plate. Garnished with white florets, with tendrils of dry cheesy wasps on the plate rim, the entire dish told a story of a romantic, mysterious getaway, where pasta was the corn imposter in a gypsy-like circus of tasty flavors and flamboyant colors. 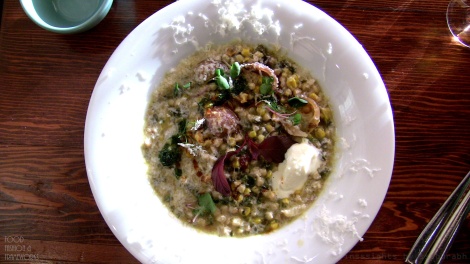 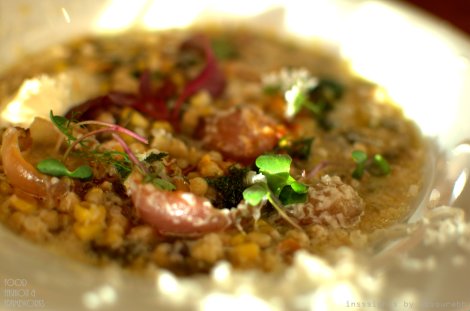 As if this gastronomic fest wasn’t enough, our next entrée arrived looking even more vibrant and textural than the previous. Layered atop a buttery turmeric hued slice of bread was a heap of sweet onions, cucumber, greens, radish and gorgeous purple glazed carrots. These in particular caught my fancy, as carrots fall into my line of obsession, not far from my confessed love of pomegranate and curry. Lightly glazed and sliced thinly, their edges were a royal purple that exuded carrot flavor in a distinguished attire. These played tag with similarly hued radishes, complemented by a plethora of fresh greens. Although a tad too buttery, the open faced sandwich concept was saturated with enough crunchy bits to give the entrée round a palatable finale. 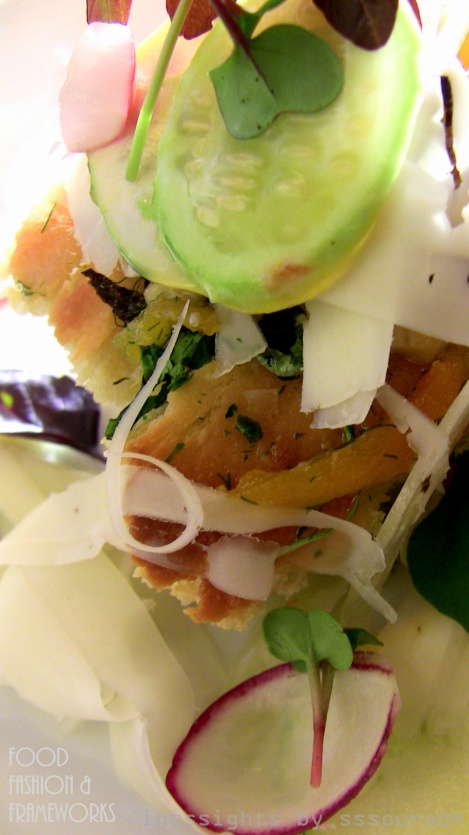 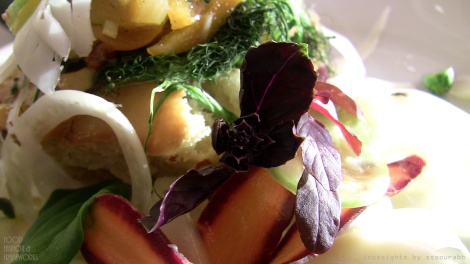 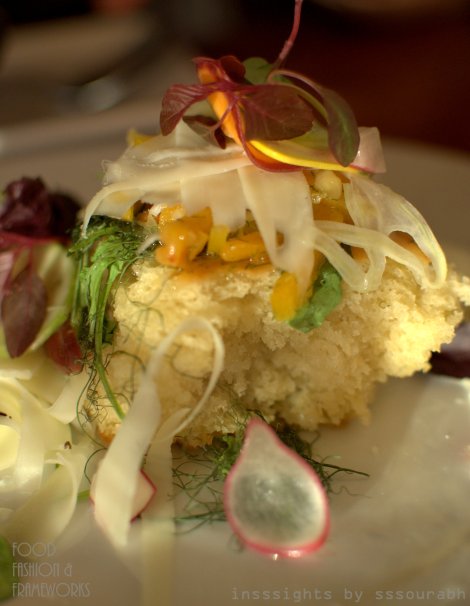 The tumultuous (in a good way) meal was rather filling, though it had already been over two hours of posing, photographing, biting and rephotographing, and slowly but surely progressing towards wiping the dishes clean. At this point, it was time for our favorite dessert round. It started with a refreshing miniature bubble tea, complete with fresh tapioca balls, and with a surprise element in the froth – popping candy! These were bubbly and lively enough to wake us up from our wine dipped slumber and food coma, and matched perfectly with the berry cucumber flavor of the beverage. The mini watermelon imposters returned like little creatures itching to take a dip in this pool of flavor, perched ceremoniously on the rims and edges of the glass. Plated on a recycled looking menu scrap and broken tile chip, it artistically reminded us of the environmentally collected and interconnected philosophy of the restaurant.

The dessert itself was sans chocolate, much to my disappointment knowing my addiction for all things chocolatey. Yet, it was expectedly visually astounding – a toffee date cake topped with celery ice cream, with a tomato strawberry sauce in irregular circles. I am always enamored by offbeat ice cream flavors, and this vegetable inspired one was no less. I have been told that vegetables make filling ice creams due to their starchy and fibrous nature, as they mingle well with the cream during solidification. Topped with berries and greens, we were reminded gain of the organic farm to table approach that was swept skillyfully in the dessert! Although well assembled, I looked over the tasty but comparatively less punchy cake component. The complementary contrast of flavor and texture was a tasty finale to the entire meal.

The sun was still streaming into the glass walls lazily, evoking even more of a slumber when we were getting ready to leave. The entire experience had been akin to an adventure, with all its peaks and highs and breathless exclamations and discoveries. The hallmark of Ubuntu truly is its juxtaposed flavor combinations, and the textures that lie beneath the various guises that its ingredients take on.

Its not often that after a plethora of tasteful wines, from vanilla to raspberry to impeccably nutty, that you find something else can still engage your tastebuds in a conquering tango.

For those seeking a visual and sensual adventure without moving a muscle, especially on a breezy and lazy Sunday, look no further.
My experience was simultaneously earthy and increasingly opulent, a juxtaposed combination.

This emotional and sensational whirlwind sans physical exertion should be christened a sport in itself.
For after all, it is capable of infusing a leisurely lazy Sunday with (more) wine, veggies…
… and utmost gastronomic adventures.

13 responses to “Opulent Veggies and Wines … with Lazy Leisure”