“A garden brings life and beauty to the table.”

And having feasted in the radiant garden by Alice Waters’, I attempted to foray into their humbler, earthier and robust culinary spectacle, Talula’s Daily, paying homage tothe  City of Brotherly Love and peace in Philadelphia laid back vibe. Greeted by crusty, warm bread scents tinted with fresh coffee scents, straight off the cobblestone streets, it was a dark, dimly lit, bustling and cozy vibe. As I had said before, charm has no formula, and Philadelphia inherently possesses it.

With a promise of real, wholesome foods and ingredients, Aimee Olexy ensured that the ambiance reflected the enchanting, old worldly charm that both the city and the restaurant promised. Walls were decked with cheeses of all shapes and sizes, culinary utensils, jams and marmalades and matte brown paper bags filled with homemade museli and granola, hand tied in grandma’s string. More musings included an amusing larder counter and refrigerated section for creative sandwiches, which was closed come nightfall, but imaginably brimming with activity for the not-average lunch goer. The La Colombe coffee beans and bags were a marketing standout in the otherwise all wooden tables and chairs setup, complete with gingham table cloths and an open kitchen to peer into. The hostess was not chirpy, but friendly, as if hosting a group of friends, pouring drinks and reminding us that were in for supper, not dinner. The dishes were hearty, country meals, with local farm ingredients that we could watch being cooked. Like a supper club of yesteryears, it was truly an ambiance made for a home cooked meal, sans cleanup. Being of semi British kin, supper was a ritual in the household, a feast of its own with teas and toasts and jams and butters, often with a cameo from something fried. Feeling contently at home with a chocolate show veteran, the meal commenced.

It started with home made brioche with lobster mushrooms and balsamic, a morsel on a plate, similar to the accompaniment of homemade cornbread on an equally disproportionate pedestal. Both tasted earthy and fresh, warm and buttery. The brioche had a balance of sour with a textural contrast in the rubbery mushroom, while the sweetness of the cornbread was a bite I could inhale till eternity.

Both arrived on colorful, mismatched plates, which was a forte of the venue. In an ambiance surrounded by bone china plates painted with sparrows and honeybees, with stoneware and cookie jars and teapots, it was not uncommon to find splashes of color in unusual spots. The owner told us it was an exclusive partnership with Anthropologie, which explained the quaint, bohemian charm. 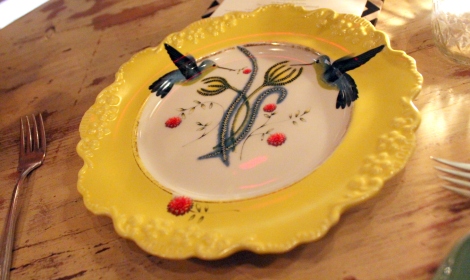 I next received a corn broth soup atop pickled vegetables and tender floral petals. The edible floral trend followed me from out west, and blended well with the dense richness of the soup, and the tangy bitter of pickled tomatoes, watermelon and cucumber, without drowning in entirety. For I could still chew through the fibrous remains of floral fantasy after slurping through an entire bowl of soup.

Almost celebrating America’s favorite crop, I next got a corn dish with bean molasses, vegetables, spiced tomatoes and a noodle salad. Exploding with flavor and texture, I wholeheartedly gobbled the steamed corn, a feeling that plucked me from present day and plopped me into childhood. Tomatoes were once again given a promoted pedestal, and the spice was a flavorful contrast to the sweet corn. The charred potato and lightly dressed greens brought an earthy and textural canvas to the dish, brought together by a tamarind-tasting bean molasses. With cooked beans in the mix, it did leave me puzzled about the ethnicity of the dish, jumping from Mexican to Italian to American with every bite. Not that I minded, being a cosmopolitan myself.

With an exponentially growing obsession for cheese, I could smell the scent of a pre-dessert cheese board as it tiptoed towards me from the kitchen. For it was an array of aromatic rosemary bread topped with melting goat cheese, surrounded by pickled beets, beet jelly, fresh beets and warm honey toasted pistachios. 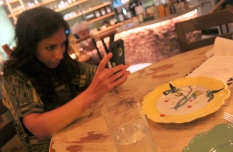 A deconstructed beet salad of sorts, to say this was one of the most flavorful beet dishes I had ever tasted would be an understatement. With three textures and temperatures of beet, I couldn’t decipher which my favorite was – the tangy pickled beets, the raw solid ones, or the cooling jelly, which complemented the oozing cheese beautifully. The cheese and rosemary toast was another slice of heaven altogether, with a sweet and musky aroma, and a flavor combination that gave a hint of fennel. 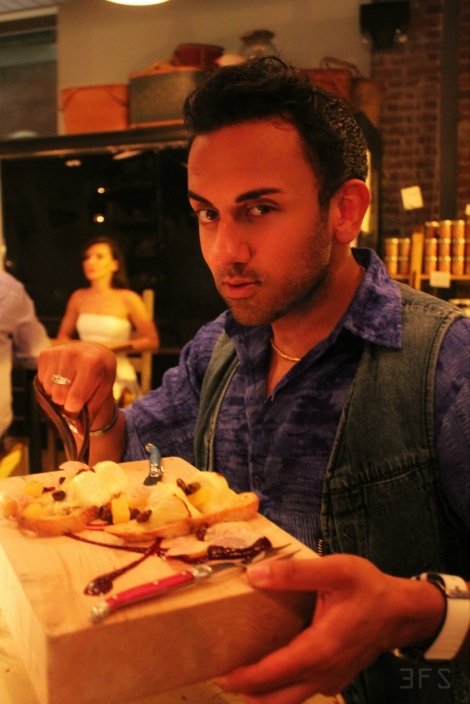 Of many things I love, one is the inclusion of seasonal fruits in fresh desserts. Another thing I love is heated, steamed fruit, an acquired temperature and taste picked up in Punjab. Both came to gleeful life with a peach and blueberry crumble, topped with almond ice cream. The scent of steamed peaches was alluring, as was the deep purple hue of melting blueberry from a sizzling skillet. The almond ice cream tasted more vanilla than almond, which worked in this instance, giving due importance to the succulent fruits. A countryside winner all the way. 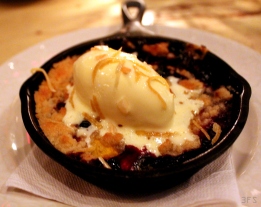 With a reluctant goodbye and a satisfied stomach, I stepped out into the chilly air of a magical city. For once again, the charm of Philadelphia had capably evoked a country warmth and cozy via a hearty meal.