“Excellence is not an act but a habit,” said Aristotle.

While I barely succumb to habits, my infatuation with tasting menus continues to trail my personality with an alluring addiction. While making luxury travel a habitual multi-annual duty, I gifted myself a trip to the luscious foodie city Chicago. Saturated with opulent architecture, delicious haunts in the name of bars and a plethora of worthy Michelin Stars, I opted for one tucked discretely in the West Loop. Aptly named Grace, it retrospectively lived up to the elegance of its name and awakened my taste buds. Worthy of its triple Michelin stars, one for each eyeball that inevitably tumbled onto the floors in salacious surprise. Other notable credits include accolades by Forbes, Chicago Magazine, Eater and AAA’s Five Diamond Rating. 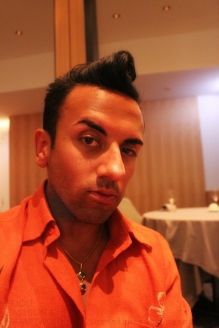 Almost lost finding the illustrious place, I found it tucked into a rather anonymous building, with even dimmer light than the wintry city, complete with neutral walls and tablecloths, with a luminescent light from the semi open sound-proof kitchen. Still, the colors were soothing, with leather seats and honey wood, dim lighting and an overall romantic ambiance. Headed by Chef Curtis Duffy, formerly chef de cuisine at Alinea and from Ohio, the motto, like many other restaurants, was to put fresh ingredients to the forefront and employ techniques of cooking and gastronomy to enhance flavor. Before commencing on my journey, I was enlightened with the two tasting menus of equal courses each, priced identically. One was flora, made for vegetarians like me, and complete with exotic floras that often overwhelmed the basics of protein in the fauna menu. My choice was obvious, and so the tease commenced. 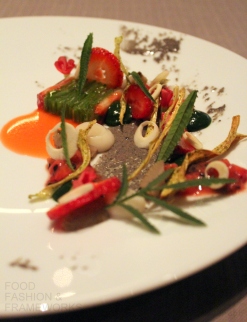 I nicknamed this teaser a date with wood, reminiscent of both a yesteryear memory and namesake, as well as its stunning presentation as being served on a log made of cork. Unleashing my inner Peter Pan or Alice, I scrummaged through this wonderland unleashing a red pepper caramelized banana. With a nonchalance towards the nutritious fruit, I found its spiced variant to be almost dessert-like, with a clash of inherent sweetness with crystalized spice. The folded spork of radish and apple resembled too much of a meaty skewer to be visually appealing, but was a fresh, raw bite that prepared my palette for the meal. Some more exploration yielded a quinoa chip that was literally camouflaged into the wood, topped with melted Parmesan cheese and lemongrass. I could have inhaled a bag of these, owing to their flavorful crunch and aromatic aftertaste. The last was an ode to my Middle Eastern adventures with a caramelized date, lined with black line sugar and cilantro. The clash of traditional Indian cilantro with saccharine sugar was alluring, and worked with the spongy texture of the date. All in all, a knock on the senses to prepare them for the rest. 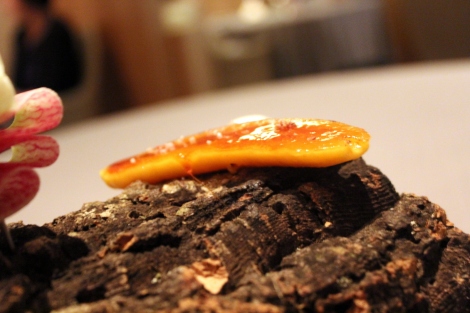 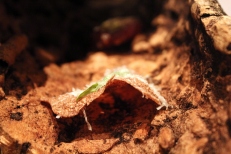 Aptly named salsify, next up with a wide plate with a miniature orifice into which an oyster plant salad of sorts was tucked, complete with bright green apple ice, herb sorrel and solace. Overwhelmed by the color and taste of the sour green apple, it felt more like a palette cleanser without being full, which in itself was not a bad proposition. 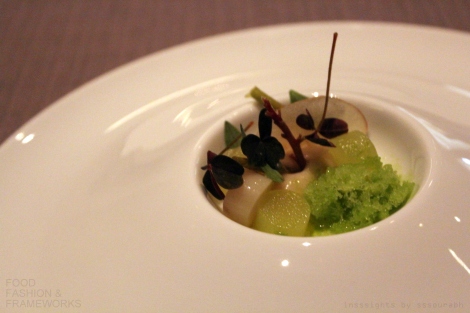 By contrast, the next plate was a dark black midnight, complete with a very green looking floral salad. Green peas, sudachi, Miners lettuce, whole miniature radishes and peaches were like glinting moonlight against the night sky, with particular attention to the cuts and placements of the nature hued vegetables in a manner that made them look like a couture embossment. With a sweet and sour taste, I especially enjoyed the crunch of the vegetables. The prickly pink of the radish was a favorite, both to the lenses and the tongues. 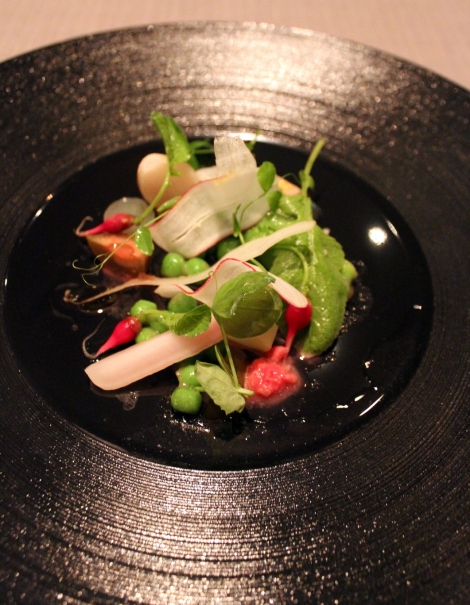 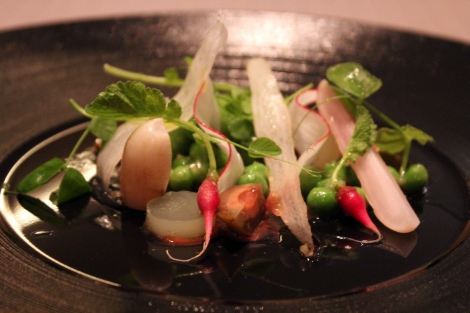 Titled asparagus, as if giving undue attention to this hearty vegetable, this dish was a literal three dimensional lift off of a burgundy plate, with enough textures and colors to deem it art. The salad of sorts comprised of green asparagus wrapped in Turkish phyllo with chive tips and egg yolks, Meyer lemon marmalade and tarragon. The raw asparagus was mildly suggestive, though the rest of the elements were high flavorful, with a zesty lemon cutting through the sweetness of marmalade, eggs and phyllo. The latter lent a crunch that blended well with the saucy yogurt texture that left a freshening taste in the mouth. 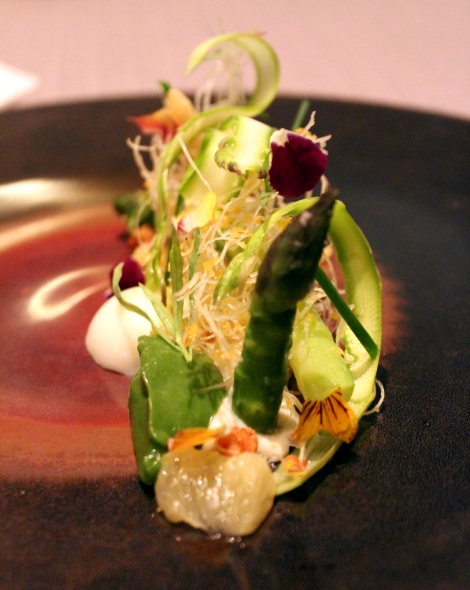 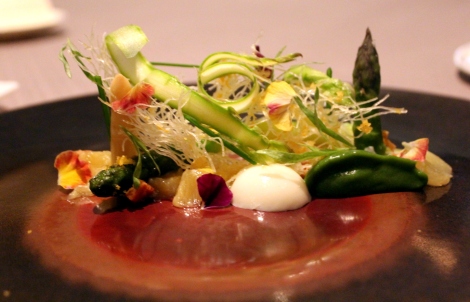 At this point, a bread basket equivalent made its way onto my table, all made from scratch in the glass kitchen. I especially liked the fennel bread with goat butter and herb butter, more so owing to the rich flavor of the bread itself. The aroma lingered onto my taste buds and exuded charm from my breadth even as I tried to taste the decadent tastes in the butters. A nicely made pretzel arrived with Hawaiian black salt, and while opulent in its crab-like composition, it did not lure me towards this mainstream staple, cookie-loving boy that I am. A sunflower seed rye was partially redeeming, only lacking a hearty brothy soup to dip it in, but fresh and impeccably spongy with every bite. The most comical of all was the waffle piece, literally a conical shaped bite with enough grooves to whisk me right back to my college days. Complete with golden raisins and citrus, it was an elevated bite though, making up for the carb heavy breadish-ness with a freshness of oranges and a Middle Eastern charm of sultanas, without being cloying sweet. Despite not being a bread lover, the quad had the potential to whisk me in opposing directions.

One of my favorite pieces of art of the evening was a literally half stacked plate, reminding me of romantic moonlit nights. My mom would have grimaced at a plate being half full, but the artistic trigonometry was mind boggling. Red strawberry marmalade, green strawberry with hearts of palm, sesame, kaffir lime, huacatay all comprised of an indecipherably alluring composition. I started with the crispy palm and dunked it into the red strawberry marmalade, sweeping it through a textural crunch of sesame and the sour greens which ended up being strawberry. As a party in my mouth, it worked when eaten in unison. 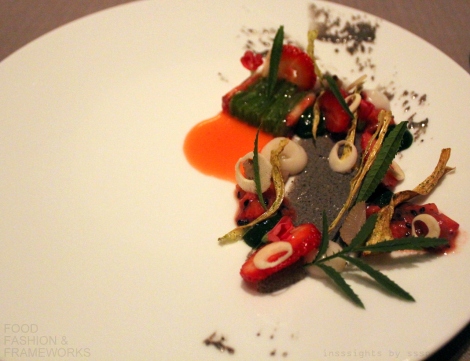 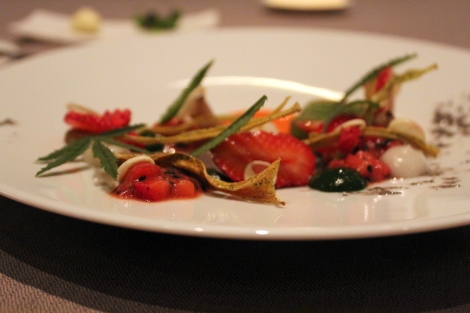 With a momentary pause in a twilight-like golden atmosphere, I realized I was halfway through my 12 course meal, and was inevitably offered a snake-like decanter of port  to digest what had happened, and to prepare for the rest.

8 responses to “Dining with Grace through a 12 Course Michelin Star Meal in Chicago: Part 1”