I am synonymous with juxtaposition.
So when I see it around me,
I fall in ‘secret love’ with it.

But to be honest, French and Mexican fusion seemed electric and satisfying on paper and concept, but I walked in with perplexed feelings about how I would find this meal at Mexique in the culinary charm of the nation, Chicago. Mexican cuisine with a French influence by Chef Carlos Gaytan, who acquired it a Michelin Star no less, was enough to beckon me to try something unexpected. Historically, the French occupation of Mexico in the 1860s were a birthplace for the influence of the cuisine, rendering it less of a fusion but more of a sprinkling.

The ambiance was casual, well lit and glistening with naturally abundant florets in glass vials, which we had fun playing with. Airy and breezy with white tablecloths and a semi open kitchen, the aromas of Mexican cuisine were as comforting as the friendly staff and their descriptive knowledge of each and every plate. 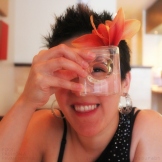 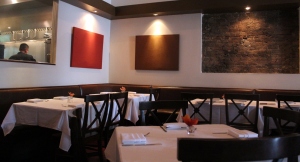 It started with the mini tostada sopa platter of mixed ingredients as a tasting, which I tried the yoghurt tamarind rendition of, reminding me of tangy Indian street food. While my vegetarian self avoided the one dollop of glistening meat, the greens stuffed into a mushroom like vessel were a savory bite, perfect to match the deep red sangria to kick off the night. 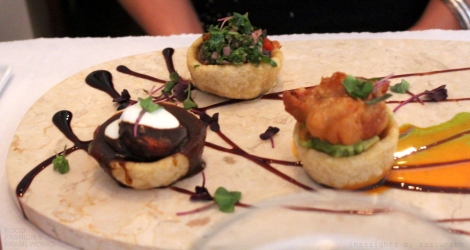 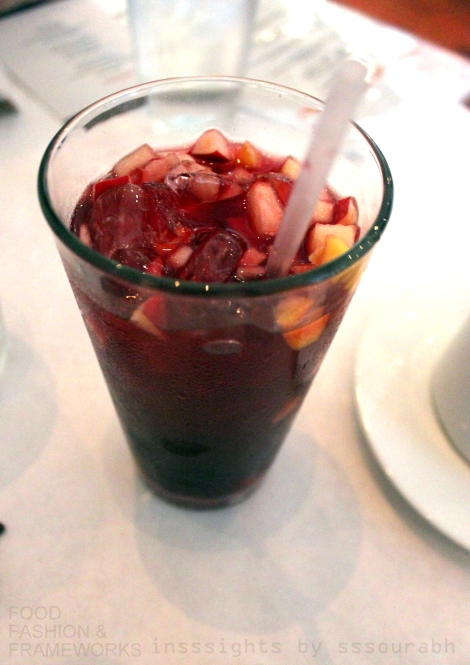 Like art on a plate was my first dish made predominantly of carrots! Like a meal fit for an anxious white rabbit in Alice’s culinary wonderland, it was made of white, sour, orange, sweet and pureed carrots, reimagined as an artistic that looked like architecture; what with steeples of sliced and cooked and flavored carrots amidst symmetrical spheres of the sauces. Tamarind and asparagus sauces added the perfect offsets to the inherent fibrous sweetness of the carrots, which in itself made for a fresh, almost healthy start. My favorite was the sweetened rendition, bringing out the natural flavor of my favorite vegetable. 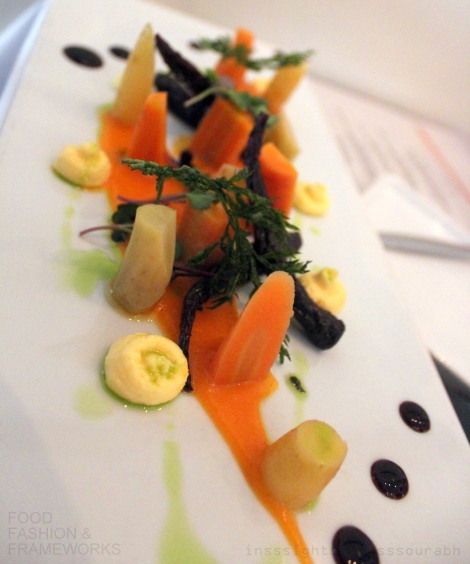 My main course was another artistically plated one with a whole stuffed chile relleno, ballooned up dramatically with roasted poblano, ratatouille, brie and greens, with a side of a balsamic sauce almost printed like a puppy’s paw print! The overlay of steaming halloumi cheese completed the aroma package, as I carefully sliced the belly of this pepper open to unravel more spicy surprises. It was like a succulent upgrade to the piñata, and I was the child who was overjoyed by it. Spicy and balanced by the sweet and sour tastes of the veggies, the saltiness of the cheese and balsamic were a perfect melody of taste in my mouth. 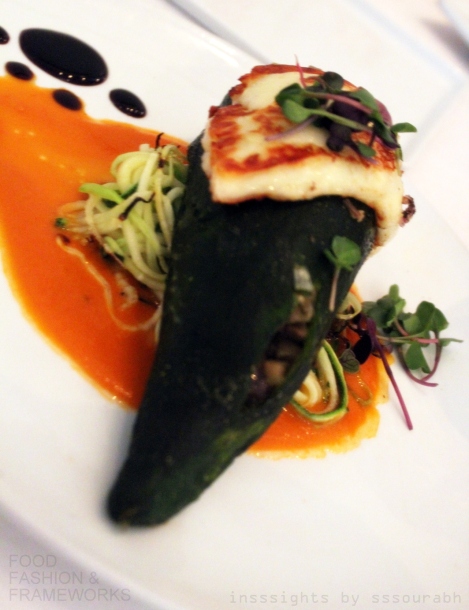 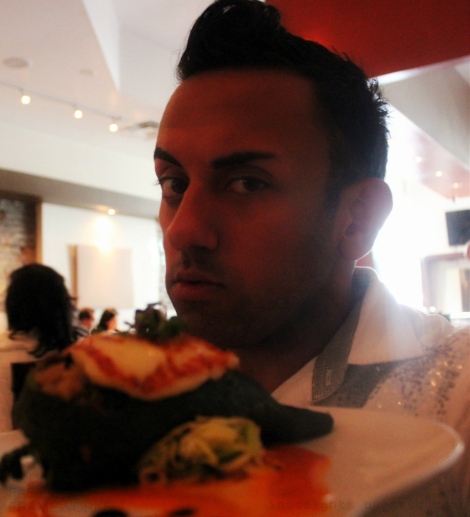 With a penchant for doubling (even tripling) my desserts, it was no surprise that I opted for two desserts, once again. 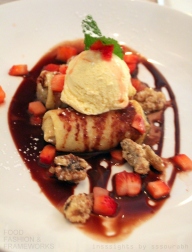 The first were a nod to the French influence, with crepes rolled up and stuffed with toasted walnuts, brown sugar and chocolate ganache, swimming in a pool of dark chocolate, fresh strawberries and topped with a scoop of vanilla bean ice cream. Reconstituting classic flavors and combinations, this tasted just like I imagined it to taste, with the unexpected gritty crunch coming from the decadent walnuts, which I could have snacked on by the bucket! 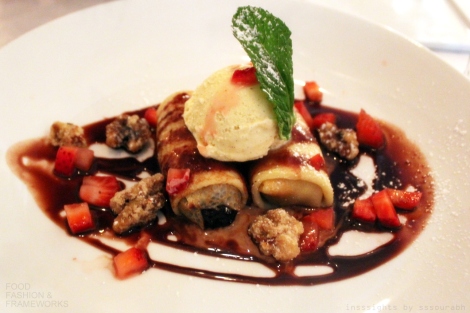 The best dessert however took gastronomy and artistry to a new, refined level of optimal illusions. For what arrived looking like guacamole served with chips and salsa was exactly the opposite. It was a avocado based dessert with sugar dusted tortilla chips and bright red strawberry salsa! Speak of playing tricks on your mind, this was perhaps one of the most creative deconstructed and reconstructed renditions I had seen in a long time. The guacamole had its inherent flavor, pumped up with honey and agave, with the crunchy tortillas dusting pixie dust like sugar for added sweetness, balancing perfectly with the tang of the strawberries. Flavorfully and texturally in unison for a siesta all the way! 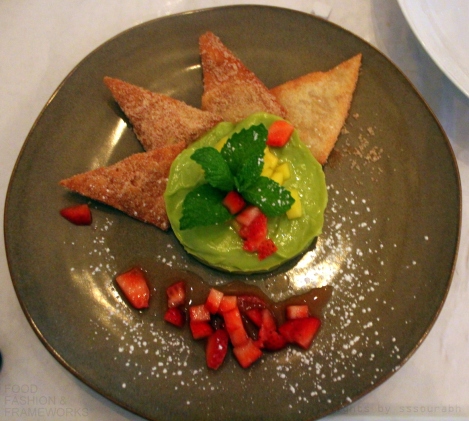 With a reaffirmed love for gastronomy, deconstruction and deceptive bites, I waltzed out into the sunset, wondering if in fact, it was a sunrise.