I crave something more… enchanting.

Which is why I let a sigh of relief when my colleagues introduced me to a boutique little store sans lines and crowds. Vosges chocolate boutique has a few locations sprinkled in cosmopolitans, but the Soho New York boutique is one of the finest. It has an enchanting and rather dark ambiance, dipped in regal purple with walls of textured poetry and doves and chocolate mixes and bars. 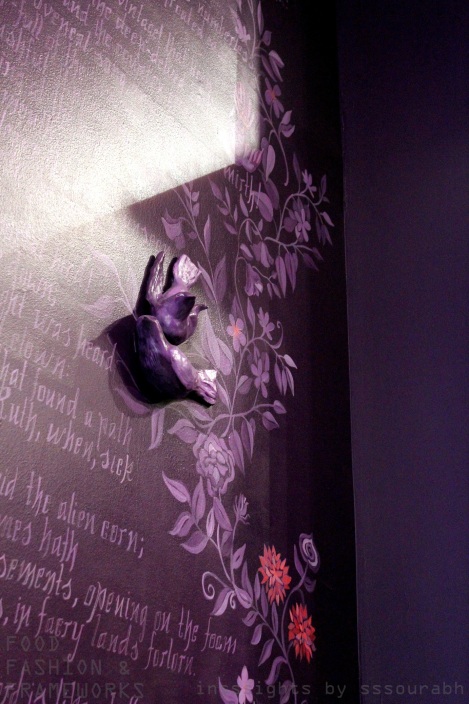 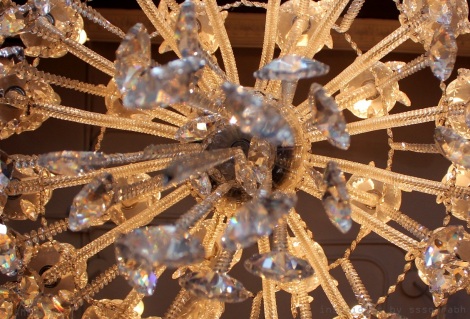 The countertops swarming with peacock candle stands and ceilings horror show chandeliers dripping with peacock feathers created a subtly horrifying ambiance. Both times I was there it was streaming daylight, and yet the interiors were on the darker side, making it even more inviting. 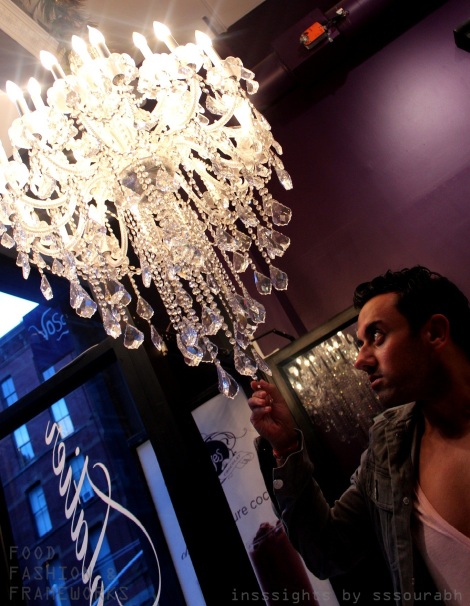 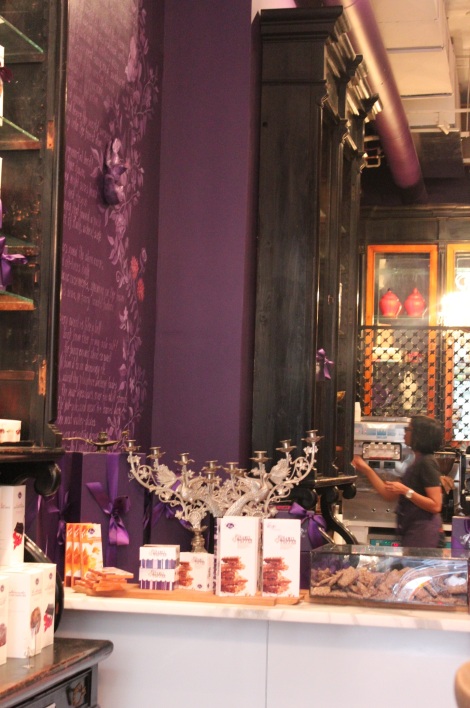 Known for their bacon chocolate which I naturally didn’t try, I instead ventured for the truffles. But en route, I fell in lust with the curry chocolate and corresponding cookie. Given my addiction to both curry and cookies, this was a detour that ate up lots of delicious time.

The hunky chunky 5 pound cookie was irreplaceable in my recent memory. It was gigantic and heavy enough to substitute weights at the gym, and the texture was akin to a deep desert of luscious dunes, with crevices that glistened with swoops of milk chocolate, and mountains tainted with a distinct yellow curry dough look. The many minutes it took to gobble the cookie (alongside milk) was a salivating climax for my mouth watering taste buds. The crumble of the cookie with a slightly spicy and sweet tang of the curry was alarmingly addictive… and left my fingernails yellow. 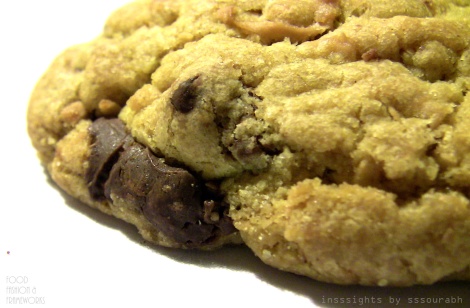 An interlude of beverages was much desired, and despite my incessant milk craving, I substituted it with coy concoctions on the menu. The chili hot chocolate arrived on a wooden plank with a dollop of whipped cream that I happily avoided, and a crunchy dark chocolate wafer that I gladly devoured. The hot chocolate itself was thick and lacked sweetness, much to my palatable pleasure. Aromatic with cinnamon undertones, the chocolaty warmth left a bittersweet taste on my tongue, which further encaged my abdomen as I swallowed.

A subsequent cold version arrived in a tall cylindrical vial which made sipping a requirement more than an option. The cold spicy punch was not as impactful, since the bitterness reminded me of my much loathed beverage: coffee. Nor was it as aromatic. Yet the flavor was nonetheless chocolaty enough to soak my mouth and teeth with a familiar taste. The accompaniments of crunchy chocolate and whipped cream more than made up for it. The latter was gladly licked up by a sexy comrade.

A bar table centerpiece was ironically a vintage weighing balance with chocolate bars on one side and sampling crunchables on the other. It was no wonder that the flaky, chocolaty, snack sized morsels were consumed on the side closer to us, thereby tilting the balance in a way that spelled embarrassment.

While waiting under gigantic chandeliers that clinked in the still air, a visual wander showed that Vosges had much character. Lolly candies dressed up as skulls made frequent cameos, the most photogenic one being on the bay window, with the fiery red chocolate bars gaping at the ashes of dried red chilies that were reminiscent of ghost chilies. We waited in the enchanting, eerie atmosphere for our chocolate truffles to arrive. 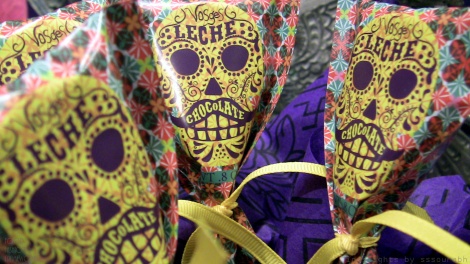 I tried a plethora of the truffles, and honestly, I wanted to like them more. Each one was flavorful, but the flavor was tragically trapped in the center. Yet each was molded and embellished impeccably, slightly overcoming the diluted tastes that I so longed to love. 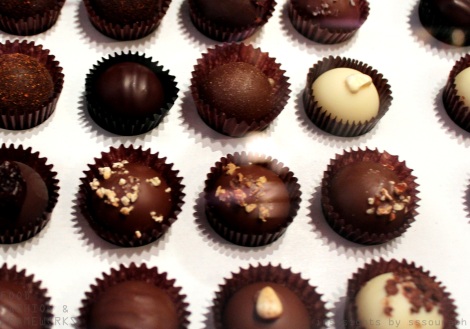 Naga was a milk chocolate truffle sprinkled with sweet Indian curry powder and infused with coconut. This curry dusted splendor was by far most superior, for the tastes melted graciously together on the palette.  With a penchant for adulterous flavors of chocolate, I wanted to like the Balsamico, where dark chocolate flirted with 12 year aged balsamic vinegar and Sicilian hazelnuts. But while the texture was crunchy owing to the latter, the former barely made it through, as I was left yearning for more of a kick between my chocolate teeth. 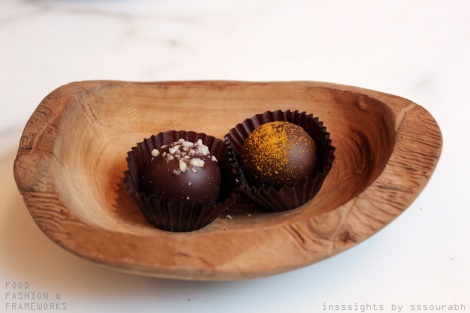 The Wink of the Rabbit evoked many pouty poses owing to its strategically placed pecan. Deep milk chocolate was loaded with soft caramel and an organic New Mexican pecan. The taste was fairly ordinary, but on the good side of ordinary. It’s just that one longed for more from the actual flavor, but the crunchy pecan was nonetheless a textural delight. 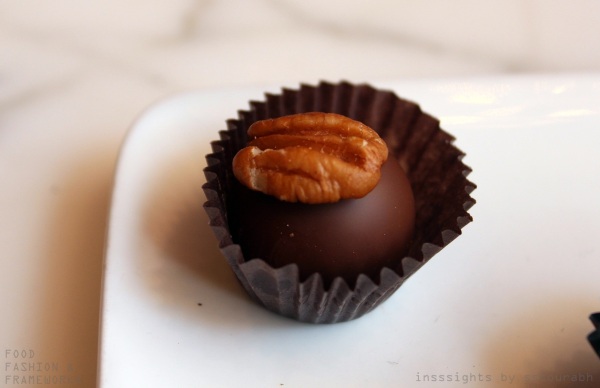 I longed for the Black Pearl to whack the senses out of me, given its inclusion of a multitude of experimental favorites: ginger, wasabi, black sesame seeds, all in dark chocolate. Yet this one left the punch to be desired, since I only felt the raging spice in a bite. The rest was overpowered by exceptionally high quality chocolate.

The oddly named Rooster was the highly recommended one by chirpy sales folks. Packed with Taleggio cheese, organic walnuts, Tahitian vanilla bean encased in bittersweet dark chocolate, it elevated expectations greatly. And being a lover of the many ingredients, I found the cheese completely lacking, while the tart sweetness of the vanilla made it through, marrying delectably with the chocolate. 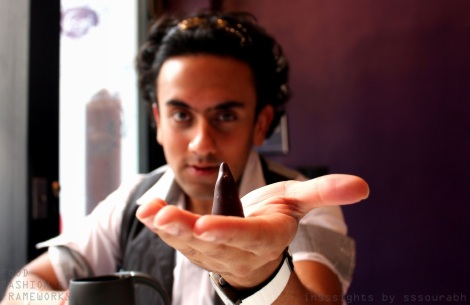 The Woolloomooloo sparked many attention-seeking glares due to its whimsical name. It was in fact just 45% deep milk chocolate loaded with one of my favorite nuts: macadamia nuts, alongside coconut. Tasting decadent and milky, it was one that didn’t go overboard in tastes because it didn’t promise to do so. Definitely giftable and repeatable! On the other hand, as many know, I despise white chocolate. Yet the synchrony with first press extra virgin olive oil and green olives, in a literally labeled olio d’oliva, was nothing short of a taste competition on my taste buds. While I wouldn’t go back to it due to the sweet undertones of white chocolate, it definitely ranks high for juxtaposed flavor combinations.

There was a vegan truffle collection which I didn’t try, but hope to salivate over next time, especially with dietary restrictive company!

We plopped off the wooden planks and onto the floor, full of rich chocolaty landslides, and wandered the store, picking out favorite grapefruit infused and curry chocolate bars to remind of this wonder-hole in our comfy bedside crevices. I was tempted to pick out some hot chocolate, owing to their strategic placement next to Mexican skulls or titles like Aztec elixir couture cocoa, but refrained from knowing that my gym hours would rise exponentially. 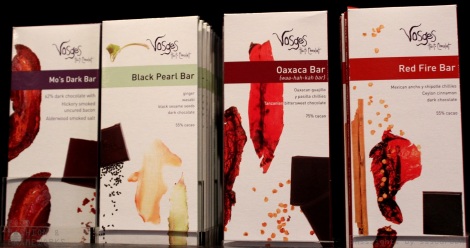 Sweeping past swooping chandeliers, it was time to bid farewell to a memory. The momentary end of a saga. 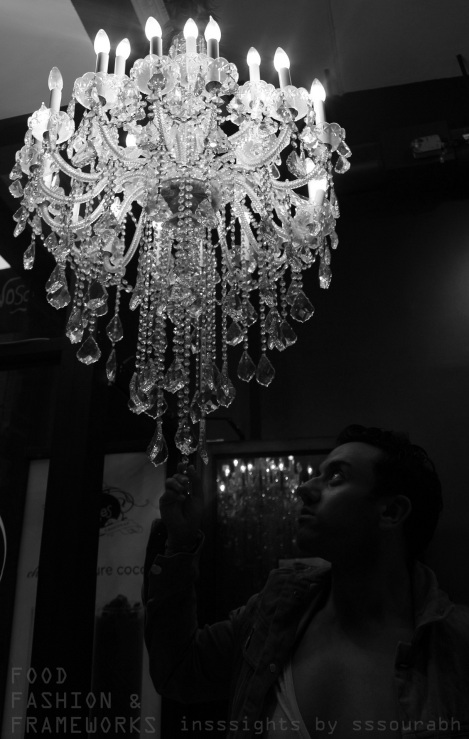 The tinkle in the chandelier beckoned me to return.

26 responses to “A Dark and Enchanting Saga of Chocolate”