Sundays are a day for the quintessential question that is best asked to the squirming-to-by-anonymous Saturday night: did you wake up to the sunrise or stay awake until it?

As I’ve mentioned before, the one thing that gets me up on Sundays is the yearning for a quality meal: brunch. A meal that transforms routined and rehearsed meals into a spectacle.

Now when in Miami however, the ordeal is actually more of a rehearsal. An exercise in picking the perfect pair of sunglasses that can perform many un-routine functions: protecting against the South Beach sun, enabling the shameless savoring of its tanned bodices frolicking on the beach, and hiding the eyes that speak of stories of the night before.

After a luscious night escape, it was time to stroll into the quaint Art Deco district, where despite passing Versace’s opulent mansion, everything was mellow with the scent of salty sea air, lazy with the gleam of dwindling sunlight, broken by swaying palm trees. 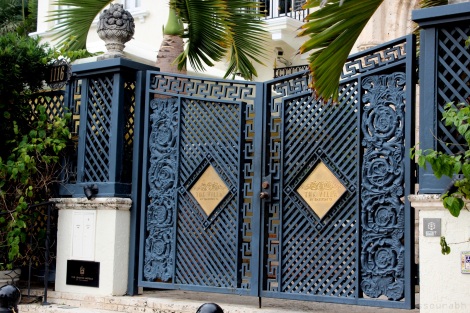 And my footsteps took me to News Cafe, a 24 hour sidewalk cafe newsstand and bookstore on the iconic Ocean Drive. And ironic that, like a previous Miami endeavor at Books and Books, this one too, catered to the intelligentsia via embodying newspapers, magazines, and books as a focal point for community building. And I admire places that can accomplish that without descending into ordinary.

Apparently the place was found in 1988, with hopes to play jazz and classical with simple food while showcasing national and international publications. And now, it serves as a popular, people-watching brunch spot owing to its prime location, and a slumber for the night when Miami begins to get the better of your sensibility. Hence, the word timeless comes to mind.

And so I started with a Miami rendition of my brunch coffee favorite: a cappuccino with skim milk, which I didn’t even need to ask for given that it was South Beach. Only, I got it iced, to barrier myself against the sun that was slowly reaching its boiling point.

I went surprisingly simple and hitched my stomach with a balanced protein and carbohydrate kick to start the day: sunny side up cage free eggs, baked potato hash and homemade whole wheat toast. 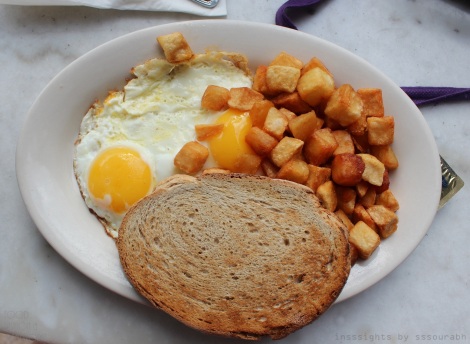 There was not to much to evaluate, having had a familiarly fresh meal in Holland’s port town Rotterdam before. For the chaotic, gastronomy, molecular seeking quirky character in me was alarmingly at ease with a rare, quaint moment. The eggs were fresh, the bread was crusty, and the potatoes were chubby enough to fall in love with. 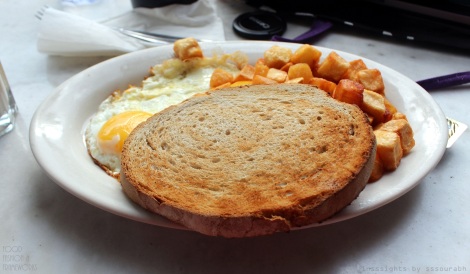 And of course, despite being in the land of the chiselled, where sugar is frowned upon like an omen, I still got dessert. I singled out the signature salted caramel cake, owing to my penchant for the trending combo, despite its kitsch translation into mainstream.

It arrived looking like sumptuous eye candy, in perfect Charlotte’s Web poetry symmetry, which mandated excessive photography. Thankfully, the caramel was heavily salted, both interlaced in the cake as well as swirled in hypnotic swirls, with fresh strawberries wobbling like uncomfortable sidekicks in a movie. Not my favorite berry, but a refreshing break from the rich flavors of the cake it self, which married the fresh, homemade sponginess merrily with the relatively new age salted caramel. 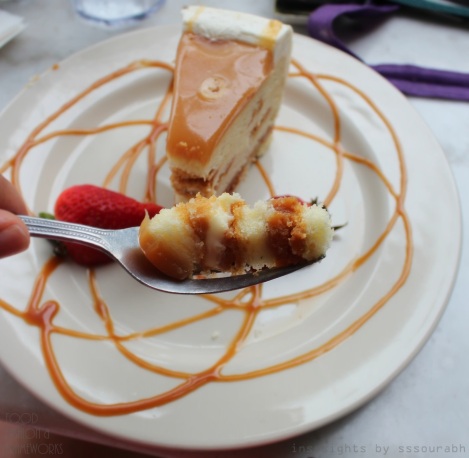 While my nutritionist would probably not be happy with my balance owing to the detour with dessert, I was content with my morning, and poised to explore all that South Beach Miami had to offer.

By day. On a lazy Sunday. On a fully belly.