An oasis never really disappears, but rather swallows you up with it.

Vegas is one such spot that I juxtapose my feelings for, what with its superficiality but its ownership of the very same. For if we are going to be indulgent, artificial, and over-the-top, let’s just be the very best at it! However, even beyond this, there are some fundamentally fabulous things about its culinary culture, which I explored on my sweet suite stay at The Cosmopolitan.

The daytime rituals were soaked in transcending into one of the trio of Cosmopolitan’s pools, the most adult one for that matter. And beyond the sex and sin, in all honesty my ice cream hungry self was driven to the gastronomy dessert bar. For an institution that could host such a formidable concept in an otherwise oasis in the desert frequented by bodyholics, I was deeply impressed.

I started with the morning cereal, as the mixologist put it – stoli milk shaved ice with Cinnamon Toast Crunch cereal!

To say that it was quite the knockout is an understatement: the cereal milk style quality of the milk was inching towards my favorite milk and bourbon combination, which unsweetened the saccharine taste into a more palatable one. The kicker was of course the childlike memory of whole pieces of that whimsical cinnamon sugar cereal, making this an adult breakfast in an adult playground. 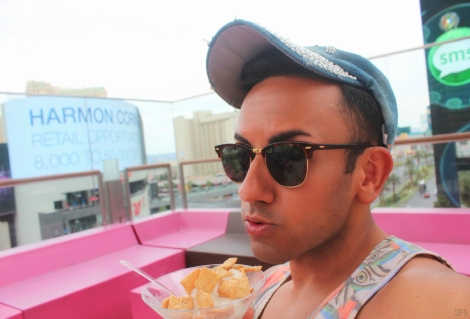 Obviously not going with just one, I bit next into the cocktail on a stick: a remarkable combination of lemony mojito ice pop with raspberries and pistachios. Being a dairy pop, I was initially apprehensive about the lemon and milk combination, but with the combination of the Middle Eastern staples, it ate like a kulfi of sorts. Spiked, of course.

The thing with a resort style setup in Vegas is that one longs to lounge relentlessly at the pool and suite, staring into the abyss at this manmade empire in the middle of nowhere. Which is precisely what I did, what with basking sunny views, scintillating temperatures, and a view behind Versace eyewear and obviously second skin Roberto Cavalli leopard print swimwear. 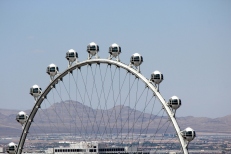 Come nightfall, the ensemble switched to the emerging lights that lit up the skies and made the stars jealous too. A low cut Topman tee was paired with a Tom Ford microcheck blazer, just for the right amount of wrong. 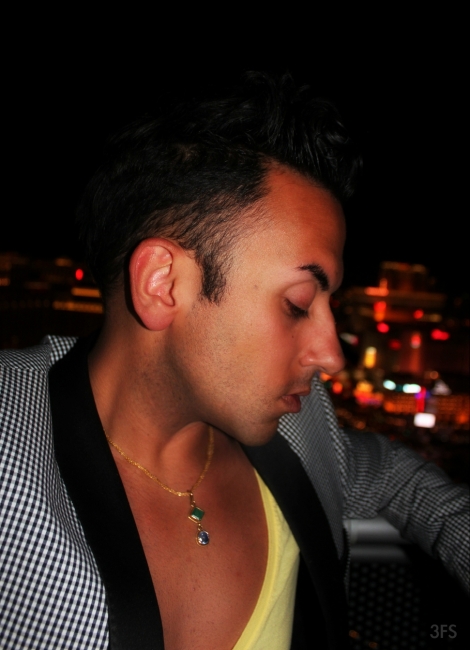 I headed to Chef Jose Andrés’ Jaleo, located within the complex itself, right next to the decadent Scarpetta on an elevated roof style perch. Having dined at his institutions in Los Angeles and Miami, I was excited to try the authentic Spanish vibe in a retro casual environment that was upscaled to Vegas sensibilities. With a mind full of stories and the companionship of mischief, we opted for three light bites, starting with the ensalada coles de bruselas: Warm Brussels sprouts and cauliflower in a salad of sorts, with jamón ibérico, apricots, apples, grapes and sherry dressing. The scorched spice coating on the cruciferous vegetables was immediately enticing, offset brilliantly by the abundant inclusion of natural sweeteners in fruits! It was a sweet and spicy salad, a flavor combination I rarely found in foods, and usually reserved for desserts and particularly cocktails! 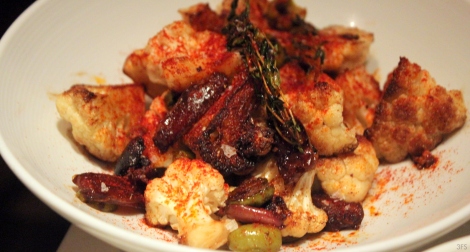 Up next was the espinacas a la Catalana; another salad comprising of sautéed spinach, pine nuts, raisins and apples. I quite liked the theme of picking crunchy fruits as a texturizing sweetener, playing with the raisin and pine nut combo on top of a bed of bitter spinach. It was a healthy bite, with surprising sparks of flavor. 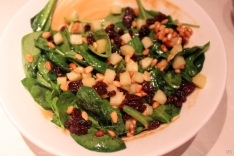 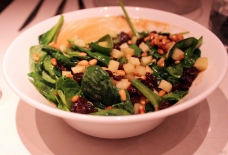 Last was a very intriguing looking manzana con hinojo, a rather well disguised sliced apple and fennel salad with manchego cheese, walnuts and sherry dressing. I had a similar concept in Miami once, and with fennel making a flavorful comeback, I could literally judge it from its distinct scent. It was a fairly satisfying, healthy bite, with the sour apple offsetting the cheesey bite, sweetened lightly with sherry instead of the traditional honey. Which again spoke of the chef’s gentle whimsy in not throwing eaters off completely, but by offering subtle variations and ingredient swaps.

With an indulgent day behind us, what was left but to sin in sin city?