Charm is more valuable than beauty.
You can resist beauty, but you cannot resist charm.

Further, one says that charm is not easy to attain. Some are born with it, others conjure it, several aspire for it and many practice it. And it need not exist merely in people, but also in places. Ever heard of a Southern charm, for instance? 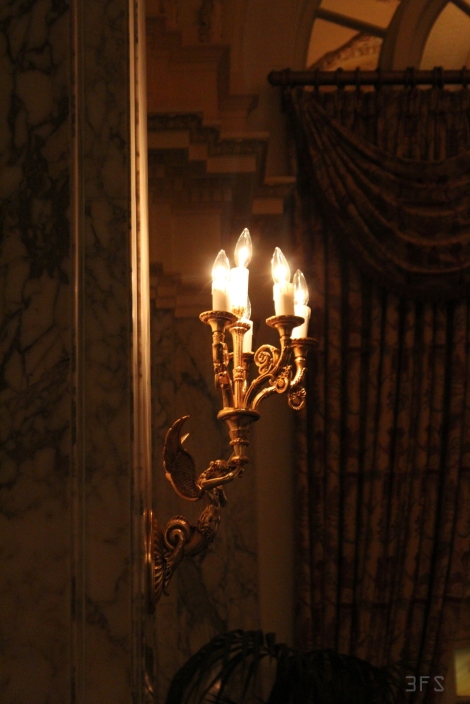 Several trips to the legendary ethos of Los Angeles has shown me that it is a city that embodies a long cultivated legendary charm. But an allure of another sort exists in the Southern American states, like Nashville, home to country music. Where I have tumbled and frolicked and gobbled before, only to find that aside from a culinary history that originates with pans full of butter, it also has a rich legacy.

Earning a place in the National Register of Historic Places is one such luxury hotel, The Hermitage Hotel. Designed in the Beaux Arts Classical style, it is a chip from the 1910 era and the last survivor of its era, with a timeless feel given its glamorous attire: a dim lobby, a wide and grand carpeted staircase, a sparkling ballroom with a chandelier and gold bordered drapes, woods of all colors from burgundy and mahogany, and an overall sepia hue glossing over the entire vision. With visibly high quality Persian rugs, overstuffed lush furniture that mandated poses and naps, Italian sienna marble archways and a hand cut stained glass ceiling, it was a breathtaking spectacle of sorts. 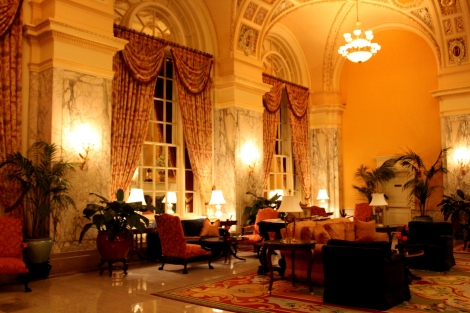 Apparently, as the cheerful and dedicated staff informed us, “Meet me at Hermitage Hotel” was one of Nashville’s most popular phrases in the 20th century, words that were timeless and speckled with pixie dust.

It so turned out that in 2008, the men’s restroom of the Hermitage Hotel was classified as America’s Best Restroom by Cintas Corporation. And splendid it truly was, with a black and forest green art deco theme, leaded glass tiles and terrazzo floors. Complete with a vintage black and gold phone and a shoeshine station, the opulence and mirrors made it less kitsch and more elegant, almost like a powder room in a luscious setting.

It definitely tempted attendees, usually from the restaurant or the lobby, a peek at old world untouched glamor, and possibly entranced couples into a bite of mischief in the mirrored vanity. 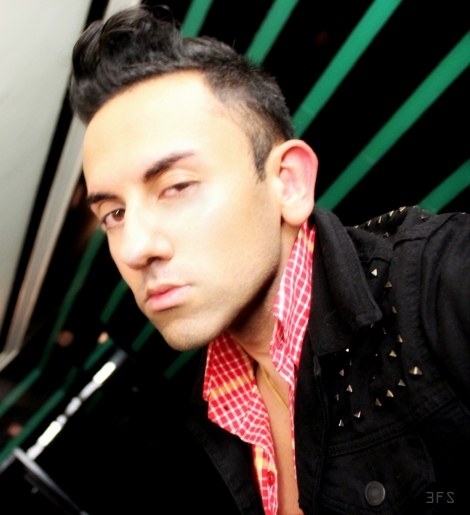 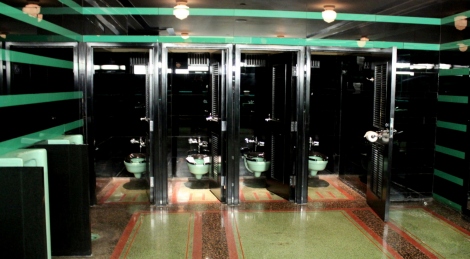 With the expectation of everything being served in sterling silver, the hotel acquired the term ‘Grand Dame’. A former home of President Andrew Jackson, a popular meeting spot for politicians, singers and the city’s glitterati, who’s cash heavy deals were made in swanky lobbies, smoke dense suits or the iconic restaurant. 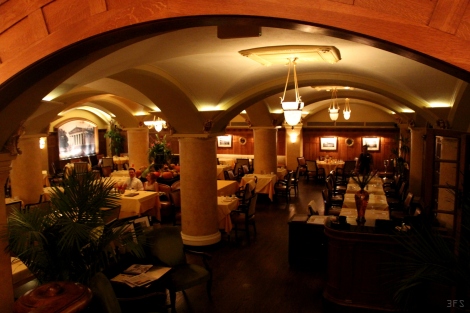 Bringing me to the Capitol Grille, a scene-y spot of Nashville. Submerged below the lobby in an entirely gold and earthy vibe, it was a classic American Riviera, with white tablecloths and immaculately set up tabletops. As per the highly attentive staff, the ingredients were all sourced locally, with vegetables grown less than 5 miles from the restaurant, and meats grown sustainably too.

It started with a cocktail in a copper mug of sorts, embossed with the logo, and dripping with icy cool and exuding a strong ginger scent. For it was an aged whisky and ginger cocktail with a dash of ginger soda. Refreshing and a notch too light to blend with the pipe-and-velvet ambiance, it was nonetheless lacking in saccharine sweetness which was a pleasure for my parched tastebuds.

The sweet onion bisque soup with grilled Brie cheese arrived with the impeccable texture of a lake – smooth like silken waters, and glowing like the moon. With a thick, velvety texture, it tasted of hearty butter with a dash of spice, an undertone of onions and an unmissable creamy cheese. The textural component was a single crouton of bread with more of the Brie, one that would still melt despite being toasted, and which I could have inhaled by the bucket. 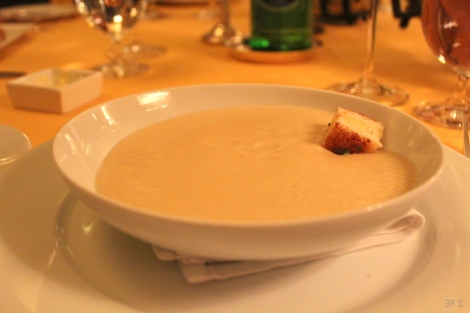 My comrade got a horseradish, cucumber and cauliflower seafood salad of sorts, which the dessert-hogging vegetarian in me languished in documenting. Call it the trance of the renaissance era.

Since everything in the south tastes more sumptuous when doused in butter, I had high hopes from the sweet potato ravioli. And it did not disappoint, elevating a carb heavy Italian dish to hearty heights, cooked with beets and candied celery. The colors of royal maroon to gold married regally, and exuded a juxtaposed buttery bitter flavor, offset with the crunch of pinenuts and the undertone of sweetness. Truly a layered, complex dish of flavor meriting a repeat bite of sorts.

I had the pleasure of requesting and finding Hungarian Tokaj wine in the golden cellars of the hotel. Imported from Hungary, it was a sweet, 6 puttonyos strong wine, almost saccharine like honey but with an aftertaste of lust-worthy memories from Hungary. The perfect enchantment for a step into the dessert course itself. 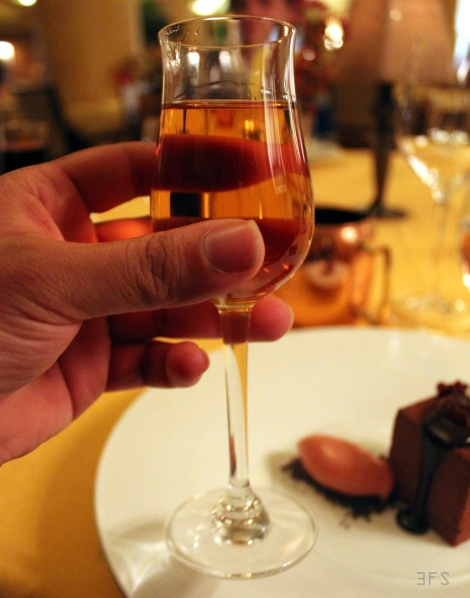 Surprisingly, with a cake on the menu, it was not an oversized and typically Southern glossed fare, but rather modern and almost European take. A cubical chocolate cake was glazed with cherry, with a salted caramel core to mimic a molten cake. While the caramel was too solid for effect, the flavors were divine, with deep bitter chocolate notes complemented by the sweetness of the cherry and the strong brandy soaked cherries. 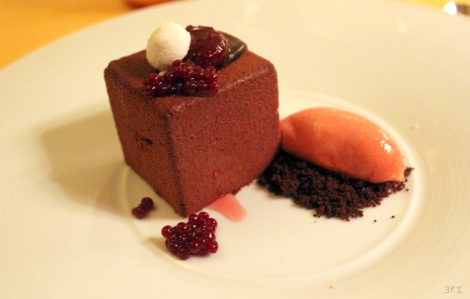 The cherry sorbet and goat cheese crumble were the right flavor and temperature offsets, tying together the remix of what seemed to be a Black Forest. Who said forests are filled with wolves? This is one that I would walk into adorned in red, ready with a fork. 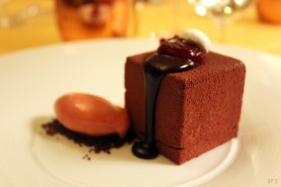 Things ended with a portion of macaroons, once again pushing things into a French direction. While I missed the heartiness and density of traditional Southern pies or steaming puddings, the macaroons were still well constructed in comforting flavors of passion fruit, salted caramel, coffee and butterscotch. I am not one to salivate over light bites, but nonetheless enjoyed these as a closing nightcap.

Making excuses to take selfies in the award winning bathroom, I slowly tumbled out onto the charming streets of this whimsical city, where even walking seemed like I was in a trance to a frolicking beat.

17 responses to “Inside America’s Best Restroom! Along with History, Food and Frolic”