I always channeled Peter Pan‘s vision with my infatuation with all things chocolate and candy. But perhaps more than Pan, it is Lewis Carroll’s Alice in Wonderland that approaches a child’s adventures with unprejudiced eyes, describing how adults have created rules of social etiquette that come across as “Nonsense”, as Alice would put it. Perhaps a nod to whimsical literary writing, but it does provide an undertone of understanding the egos and judgmental nature that we pull with us through life.

Dominique Ansel‘s Wonderland marked a debut at the celebrity chef speckled New York City Wine and Food Festival (NYCWFF).  Only, unlike last year’s Grand Tasting focus on gin, this was a pivotal and exclusive focus on desserts. Naturally, unlike my White Rabbit habit of being punctually late, I was the first of guests for this sugar inhalation. Toppled with my intrigue by Alice’s world of whimsy that, rightfully so, dominated this purple plunged and glitter dusted Wonderland in both interior decor as well as culinary artistry. 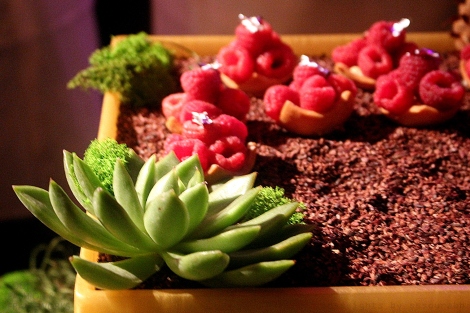 Amidst a series of fondant flowers and edible greenery, one of the iconic scenes of Alice’s world involves bottles that command drinking, making one shrink like a child (and later grow as an adult). Tiny vials by Stephen Collucci of Colicchio & Sons were filled berry flavored ciders and wines, corked with miniature corks to truly remind ourselves that even as adults, we could still be kids. And vice versa. 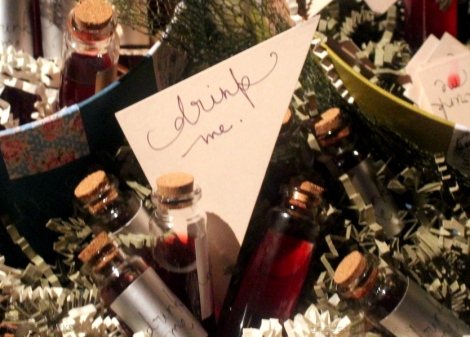 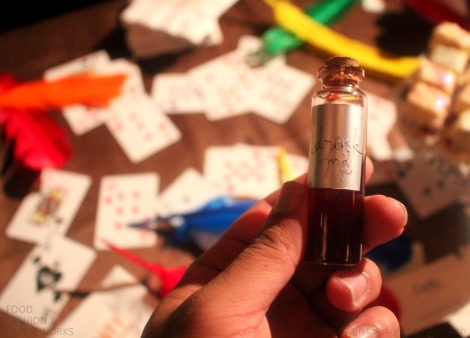 Shrinking is only the beginning: Alice later grows by eating mushrooms, perhaps realizing she is too old for a world that is inevitably a pack of cards. A giant pink mushroom with chocolate medallions glistening with fruit gummies and nuts was a simple but tasty nod to the size deformations. Lollipopping our way into childishness, my favorites were the dark chocolate ones with edible florets and coconut.

Accompanying these were tea-inspired and tea shaped pastries, each with a sugar cookie saucer, a solid chocolate cup filled with mousse or meringue and a garnish. While the green tea mousse with lemon meringue and fruity jelly was fresh, the gooseberry garnish reminded me of yet another fairytale with edible flowers. The tea itself plays a large role in Alice’s quest to grow up, as it does in mine, foretasted as an apt trend for the year. For Alice, it is a final promotion from the milky boozy days of youth into a more refined life, albeit made slightly mad.

Speaking of mushrooms, Miro Uskokovic of Gramercy Tavern based his entire display and dessert theme on this mysterious ingredient. A recreation of Alice’s boggling caterpillar sharing joys of wisdom through hoops of hookah as she sat in her doll like pose made gapers anxious for a sumptuous mushroom bite. A grape and mushroom tart with smoked caramel custard was a surprisingly sweet concoction, gratifying my love for juxtaposition, owing to its barbecue inspired ingredients. 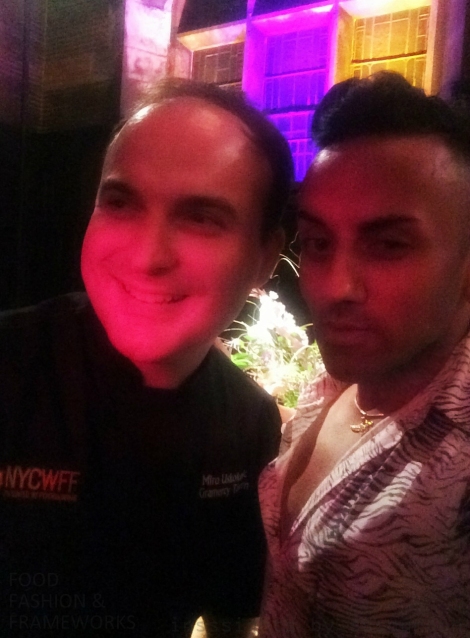 The Cheshire Cat is the next most iconic feature in Alice’s travels, one that gives her the wisest of words: “Everyone is mad here”. Benjamin Grue of Benoit made this the theme of his display, where the smiley cat dunked into a cup of sugar was significantly more attractive than a lot of the glitter dunked decor.  The sponge cake with fig mousse and jelly was textured like the cat, slightly barbaric if you delved deeper, but definitely one of the lighter and fruitier of tastes of the evening. The macaroons and macaroon tower with sugar and fondant cat features were as spooky as they were beautiful.

Speaking of macaroons, Ghaya Oliveira of Restaurant Daniel created petite, delicate macaroons in sumptuous flavors of pistachio, berry and lavendar. A new benchmark in aptly petite portions that I have grown to love! The ginger sugar cookie with chestnut cream and wafer thin brittle was equally sumptuous, a happy marriage of conflicting flavors and textures. 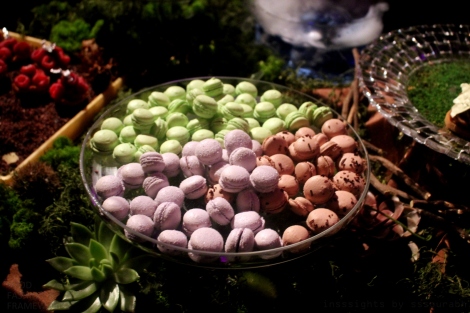 Alice next learns of the Mad Hatter, who, fashion statement aside, showcases the need for all things proper. Top Chef Zac Young of David Burke Group took to the Hatter’s style to create hazelnut top hats with a poker stamped chocolate disc and a hazelnut crunch. In envious colors of officially purple for 2014, and deviously green, Young himself confided that they were the same in flavor, using his usual friendly whimsy to be part of Alice’s blendably magical world.

Probably the harshest of characters is the Queen of Hearts, what with a penchant for all things white painted red. The theme of growing up is evident from the nonsense in the trials that seemed unjust to a child’s mind, but when it came to Ansel’s Wonderland, nothing brought me more into childhood than an old school candy push pop made modern by Richard Capizzi of Lincoln Ristorante. A vanilla marshmallow topped with rosy red raspberry marmalade, it was one that made me want to gobble like I had missed the sharing class in elementary school. 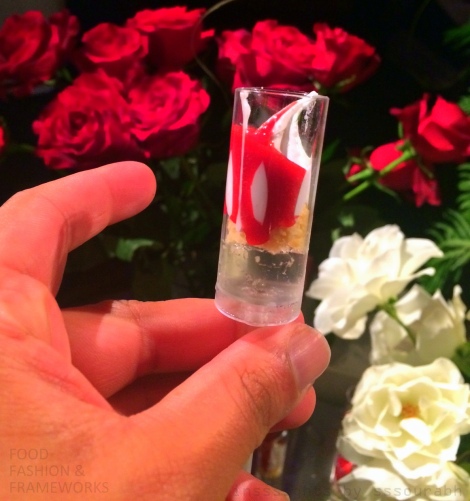 Almost like the last Queen’s checkmate was a checkerboard cookie ice cream sandwich with chestnut ice cream – an aforementioned favorite nutty flavor that prevented any dessert from getting cloyingly sweet. 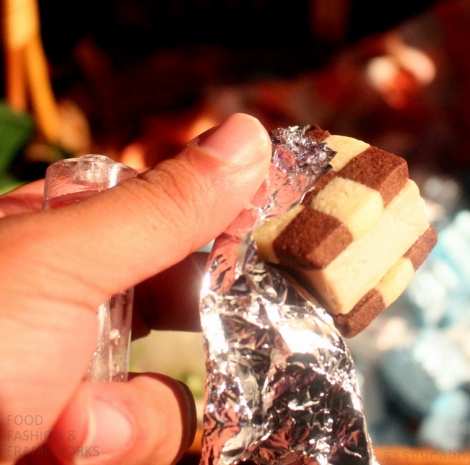 Alice soon finds that everything she has dealt with is simply a pack of cards. With cards strewn across the table like a Queen’s mischievous intention, simple was the word for the white chocolate raspberry almond cakes, showered in glitter that pushed it just over the scale of kitsch, made by Lauren Resler of Empellon. However, as a nod to the over-the-top Queen’s army, kitsch (and very sweet!) was fitting!

And for the adults of this party, much like the judges in the Queen’s jury with an identity crisis which made them write their names over and over again, how about some coffee at the end of the day? From sweet undertones of caramel to flavorful ones of coconut, Cafe de Colombia had Coffee from Huila in Colombia, freshly pressed to show how its truly done.

After dunking an evening in sugar syrup, I had yet to realize that the world was made of cards. For I think I will never quite mature (at least from dessert), as my birthmonth story forecasts. So was it really time to wake up to the reality of adulthood? 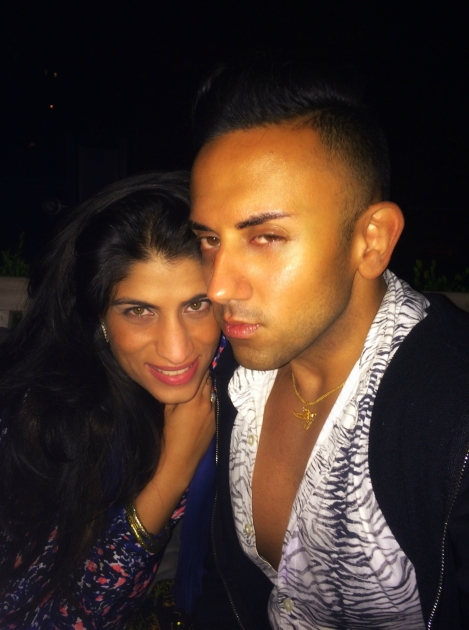 Reading, watching or experiencing,  all good stories come to an end.

And so did this one.

get roots before you grow fruits ~ @gothammag
malice in wonderland 🫖
you’ll never get back the life you waste trying to be normal 💭 ~ @thrive
Lunar New Year 🧧 Restoring energy in my favorite Chinese city, #Hangzhou, where I:
love is a three way street 📐 VDay @southamptonartscenter #TheHamptons
... so blunt you can smoke my truths
does passion come from pressure or pressure come from passion? ~ @yahoonews
... next time a stranger talks to you, look up and gently whisper: “you can see me?” 👻
paradigmatic for eudaimonia [εὐδαιμονία] ~ @dailyfrontrow
...many have an image, but few get the picture 🪞📱
meet me en route down the rabbit hole with alice 🪑🖼🥀
if you make decisions based on other people’s opinions, then you make really boring choices 🥂