Any Food Network fan will know the privilege of meeting favorite chefs on a channel that has catapulted food into the rankings of the Oscars, Hollywoods and showbiz filled glitterati of entertainment. To think, that at the end of the day, it is still food.

Only now it is in the shadows of media, social, sponsorships, endorsements, hashtags and entirely saturated with so much of the modern marketing mix that for some, it may be a deviation from good old homestyle cooking. Branding was seriously everywhere at the New York Wine and Food Festival (NYCWFF), from the back of seats to bags to pop up shops to the gigantic shopping cart as a show premiere!

But for me, events like the Grand Food Tasting fit perfectly with the progression of food as a thriving industry in the face of modern media. Evident from my composure opposite the premiere of Guy’s Grocery Games, Guy Fieri’s hyped reality show.

The way the NYCWFF’s signature event went was as follows: firstly we were informed that Mastercard ticket payers, as an official sponsor, got into the express line at Pier 94, expedited further with a Delta Medallion card. During the not-so-long wait, we received bags and glasses, all glistening with sponsor logos, mainly Shoprite as event sponsor, and KitchenAid as the culinary demonstrations sponsor. The day consisted of culinary demonstrations by celebrity chefs, followed by book signings, as well as bites from New York’s top restaurants and chefs, including the dangerous samplings of wine and spirits from a plethora of succulent showcases.  Everyone was armed with smartphones, snapping and hashtagging away, necked with a wine glass to try the alcoholic samplings that never quite finished… 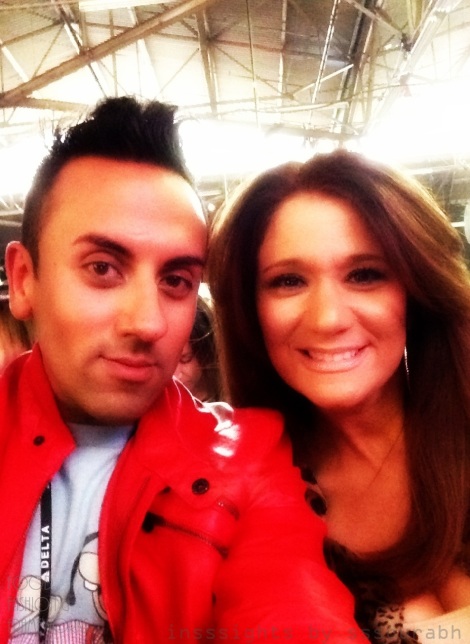 KitchenAid now has a special place in my heart, courtesy of my winning a Diamond Blender due to a winworthy tweeted photograph snapped at the right moment before I gobbled up an army of pina colada cupcakes! Pity my brand influenced Illy Coffee selfie didn’t do the trick, but hey, lady luck only shines a few times! 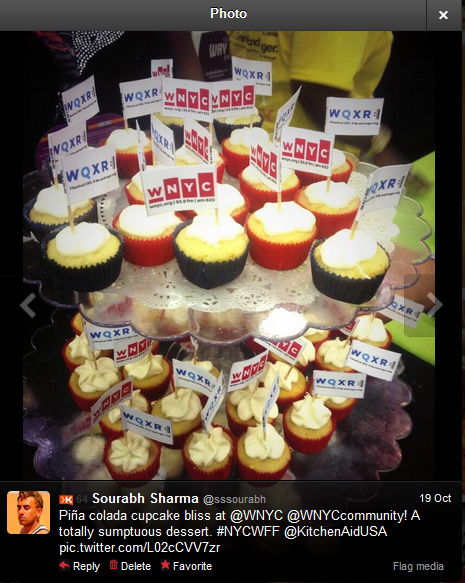 I started off the celebrity chef demonstration cycles with none other than Chef Morimoto, showing the technique of knifing up the biggest cod of the ocean! His placement in the audience caught many off guard, except me, for I was right behind him! 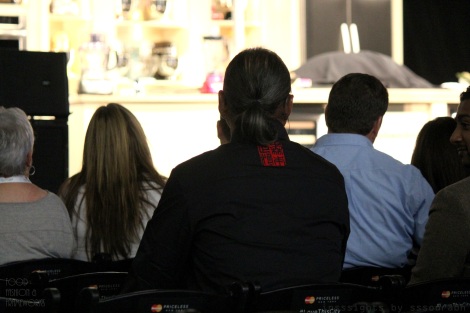 Martha Stewart and her sous chef brought theatrical liveliness to cake décor and icing, and while I loved the rose icing and learning how to meticulously endure the time spent for a result that was worthwhile, I found the garish use of rosemary rather alarming. Nonetheless, you can never go wrong with cakes in the mind of yours truly, dessert connoisseur. 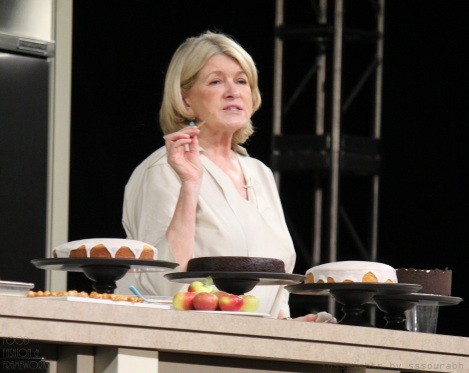 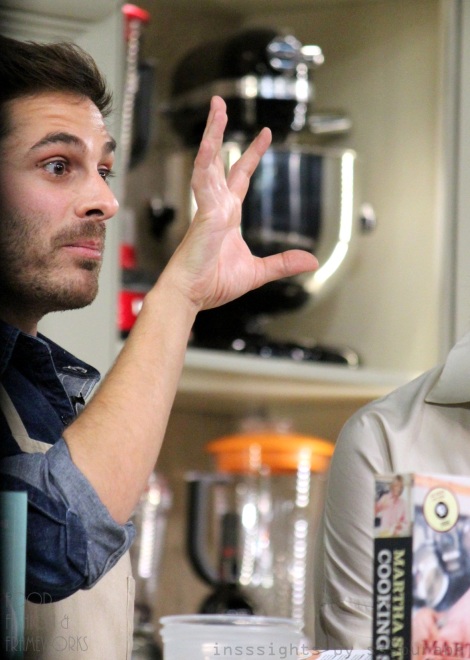 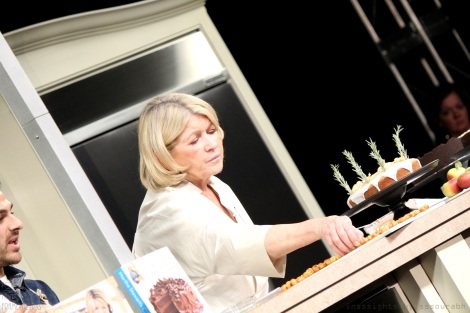 Alex Guarnaschelli lived up to her peppy on screen charm, by talking to audiences during the entire making of her multiple layer crepe cake, mocking herself, praising her colleagues, and dishing out advice on everything from endurance to bringing up kids to how to survive competitions. The comical interlude by Rachel Ray and Guy Fieri and her whimsical response further fortified her heartiness and chill attitude. Its no wonder that her true-to-her-roots charm is so addictive for all her fans, for she was exactly what she was thought out to be – honestly fun. 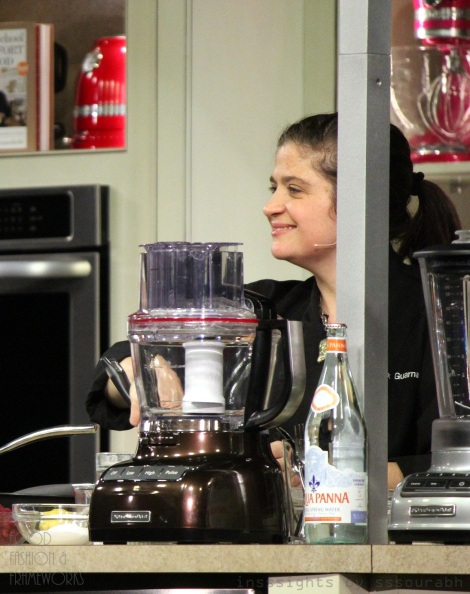 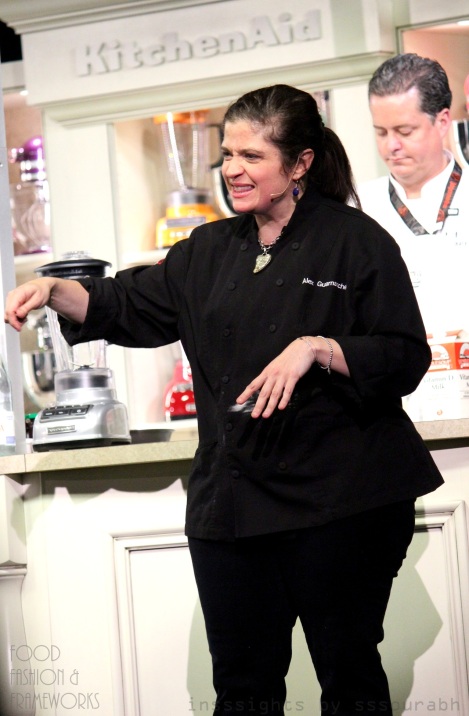 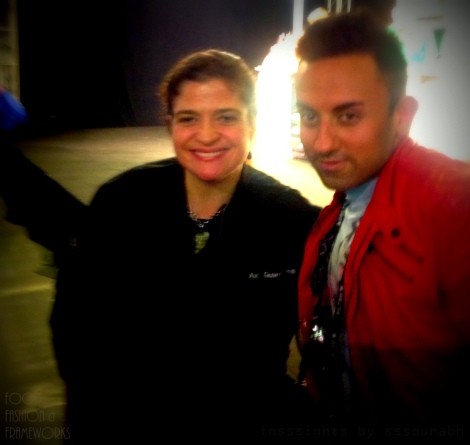 The in betweens were Bobby Deen in a dapper plaid Southern outfit reminding everyone that his mom was doing okay, thankfully. As well as a stage saturated with the likes of Chuck Hughes, Guy Fieri and Robert Irvine. The blinding flashes were enough to mandate sunglasses.

I caught Robert Irvine offline, using his bulging biceps to sign a steel plate, very fit for his composure. Meanwhile a chilled out Spike Mendelsohn lazed outside some of the culinary demonstrations, catching up with the press.

John Besh and Aaron Sanchez concluded with anecdotes from a spice tour, playfully bringing their bromantic chemistry to life while cooking up a concoction that was easily forgotten owing to their jokes about married men!

The best thing was catching up with Aaron Sanchez offline on a topic close to my heart – spicy food. He enlightened me with his knowledge of the spiciest ingredients on the planet, with Trinidad and Tobago taking the top spot on his list. Curiously enough, its the land that I had adventured into last year, and he was shocked to hear I had tried ghost chili ice creams. His book on authentic Mexican cooking was thus autographed with spicy flair as the night drew to a close. 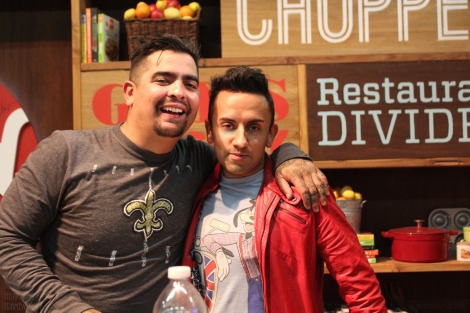 To think, that amidst the media hype, I was also able to get some succulent morsels of food and gallons of alcohol infused into my blood stream.

More of my munched up musings coming shortly once the stars have subsided!