A pizza was invented to be healthy.

Essential energy carbohydrates as the bread, vitamins and nutrition as tomato sauce, and protein as cheese. But then, Chris Columbus discovered America, a land that has evoked many a meme for what would happen if the Adonis that Michelangelo called David were to ever visit. Ironic really, that I was casually looking at State Street, the Great Street, with the hidden word eat drawing my undivided attention. 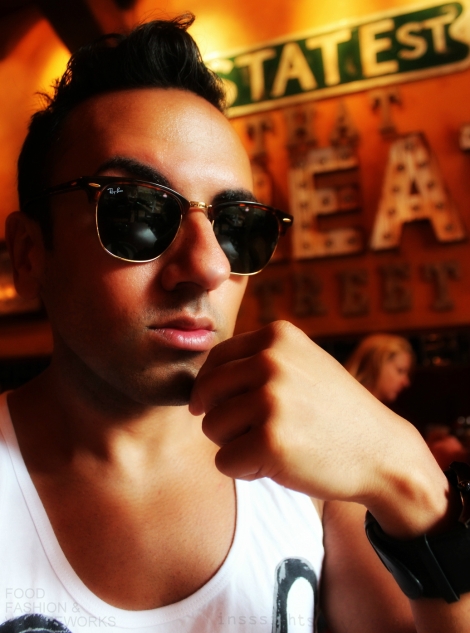 So when in Florence, do as Forencists (really…) do, and when in my favorite culinary city Chicago, go eat pizza. Of course, only after playing hypnotics and geometry and trigonometric with the way the architecture reflects off of the iconic Silver Bean in Millennium Park, actually called Cloud Gate, designed by Anish Kapoor of the United Kingdom. I found its exterior distortion of faces and buildings to be more amusing to selfie with than the omphalos (Greek for navel).

For like any navel, or central embodiment of feeling, it morphed all reflections in the dark, smelly and noisy vortex. Making it much to hard to people watch in peace. And in a fashionable city like Chicago, the practice of people watching as a sport at numerous fashion weeks has shown me that sunglasses and a clear vision are really all it takes to eat with your eyes. 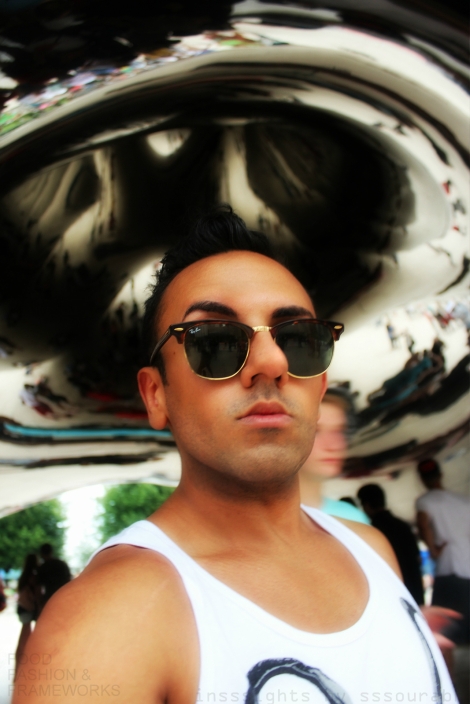 Back to pizza, what better than magnifying what I had only tasted in epic street fairs by visiting the iconic Lou Malnatis? A synonym for pizza in Chicago, its down to earth vibe and casually lined up pedigrees from food towns of the world showcased why it was a staple on Throw Down with Bobby Flay, Pizza Wars, America’s Tasting Kitchen, Food Wars and Pizza Wars, just to name a few addictive commercial outlets. During the wait, I got to see walls of accolades, and occasionally drifted to a sex starved movie playing in a corner screen.

On being seated and handed a Diners DiveIns and Dives style plastic menu, I overlooked everything I normally would’ve questioned in ambiance, for sitting in a sports bar environment was not my typical style, especially in tasting menu infested Chicago. But my underdone tank top collage worked with the place, as I placed an order for both a deep dish pizza and dessert cookie. Because why not be seduced in entirety instead of partway.

And before the pizza arrived, its aromas were already at the table. Starting with the cooked tomato scent – which I had already experienced at the high end Spiaggia of Chicago which gave this fruit (not vegetable) a luxurious tribute. The deep dish pizza stared rather dismissively at me, as if people watching on me, perhaps a karma of judgementalness coming back. With an inch high crispy crust, it was the kind that had a layer of brittle crackle that turned magically chewy until it hit the cheese. And oh the cheese! I despise pizzas weighed down by a wet blanket of dripping gooey cheese that shortly solidifies and leaves you in an unromantic state of Lady and the Tramp. And last but not least my favorite tomatoes, sliced generously and staring at me like eyeballs around a strangely designed navel. Collectively, it was a salivating bite: large and a literal mouthful, requiring exercising those jaw muscles. But with a crackling crust, warm and un-abundant cheese and the sour warm juice of a tomato with burnt cheese atop, it was a step in my conversion from non-pizza lover to full on affair target. And definitely prettier than people watching in distortion. Perhaps.

Being an inevitable dessert monster, I also got the deep dish cookie pizza. In essence, a chocolate chip cookie with three scoops of caramel ice cream amidst a bucket of freshly whipped cream. The latter I could do without, having expressed my disdain towards this national staple before, not to mention the messiness and sexual innuendos associated with it. But I honestly just find its taste and texture to be and interruption to my sugar inhalation. This was an above average fare: the ice cream a bit harder than my teeth would have liked, but likely due to the temperature of the cookie, which in turn was well baked, crispy on the outside and exceptionally gooey in the center. The caramel ice cream had specks of vanilla bean in it, which along with the doily on which it was served, made it a juxtaposition with this sports bar ambiance, transforming it into a delightful grandmother’s homemade delight. 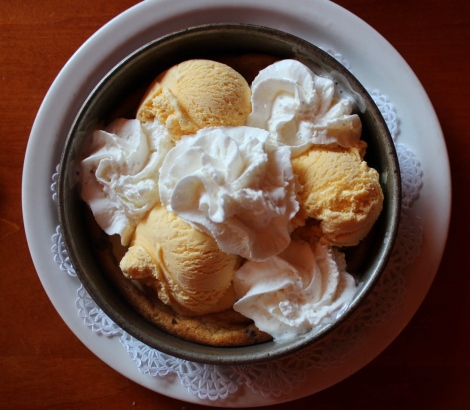 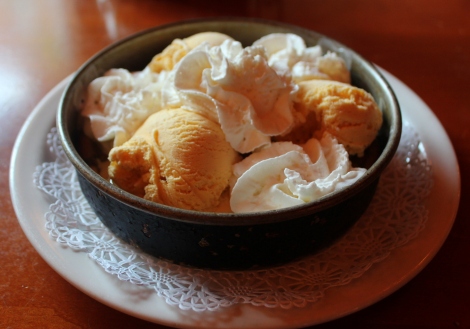 Feeling rather stuffed myself, I rolled out of the double deep dish street and wondered if I looked people-watchable enough, waltzing past the surprisingly skinny-fied faces that I was seeing with real eyeballs instead of succulent tomato ones.

Having read that Chicago had paid homage and backdrop to so many commercial outlets including shows and movies, I figured that duplicity could be called for. Nothing could go deeper than this double deep dish that I had just commissioned myself too. And I didn’t eat another morsel on this day, and chose instead to peer through the full fatigue with my golden sunglasses and have some fun in solitary people watching. And more.

8 responses to “Deeper than Double Deep-Dish, Prettier than People-Watching”