I am synonymous with juxtaposition.
So when I see it around me,
On fashion, frameworks, or foods,
I fall in ‘secret love’ with it. 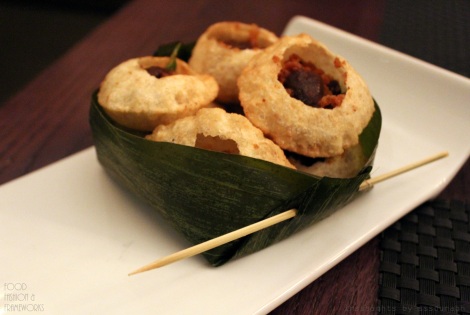 But to be honest, the Latin Indian fusion did not appeal to me on paper, but on hearing Chef Maneet Chauhan’s charming detailed descriptors of flavors and spices on Food Network’s Chopped, I had to give her restaurant At Vermillion a try. It’s 5th Ave location acted as a catalyst to the visit. I also knew of the multi-faceted Rohini Dey who had progressed from management consulting’s corporate clutches to a becoming a food empress, an inspiring story for those like me who juggle contradictory lives of laptops, runways and cutlery all at once.

My saucy Londoner Juliikg joined me for much needed company and a critical, comical and coy stamped opinion. The place itself was elegantly set up with water flowing audibly in an office-lounge-like entrance, with a large staircase leading up to a second floor restaurant that had floor to ceiling glass that overlooked the noisy 5th Ave, sans noise and pollution. The ambiance was rather dark, a usual turn on for dates but turn off for food photography. Lined with contemporary paintings and walls adorned in red, black and white, it was neither Latin nor Indian, but just cozy after a brisk walk from Soho. I was delighted that the restaurant had a vegetarian menu that was as long as a non-vegetarian one, something I had seen only rarely in my years of American dining experiences, and a step in a rightful direction! 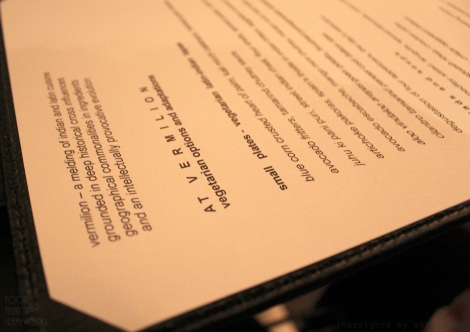 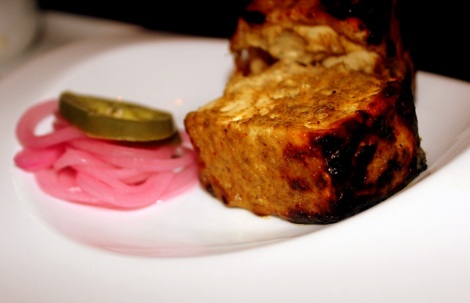 The meal commenced with Indian chai, which while strictly average given the Indian heritage, came with teabags peekabooing out of the kettle with inspiring quotes from Gandhi, Charles Lamb and other prolific writers. Wise words which more than made up for the taste of boiling water interlaced with subtle aroma. 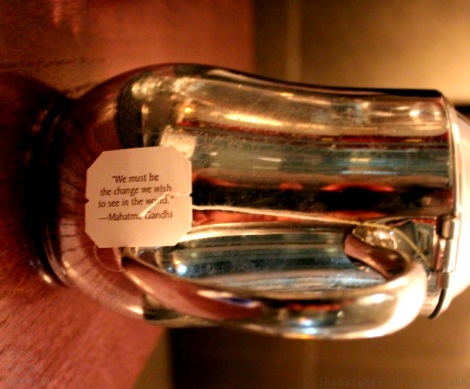 The masala papad (poppadum) set the tongue wagging to a tasty start. Shaped liked a conical crepe, it was stuffed with a fresh salad of arugula, beets, daikon radishes and carrots, all sliced like equivalent slivers, and topped with candied almonds. The blend was a fresh break from a day compacted with rich chocolate at Vosges. The bitter poppadum crunch and sweet almond bite was the perfect way to chow down the goodness of vegetables before a banquet of flavorfully heavy edibles. 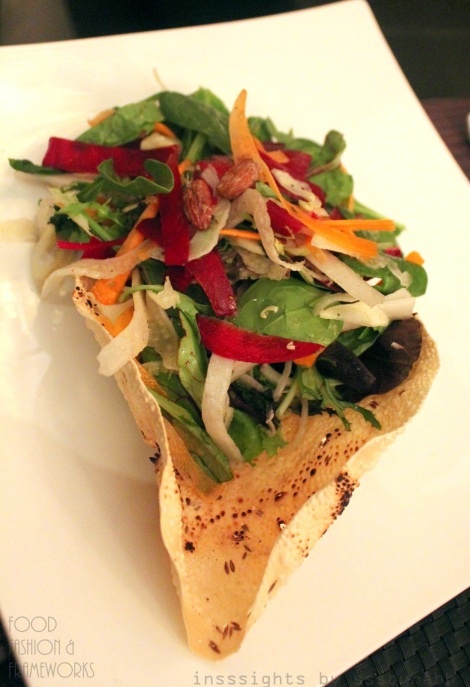 This marked one of the few times I got street food in an overly gourmet setting, something that I Live in a Frying Pan would disqualify right away! Aptly titled Juhu ki Pani Puri, it brought back memories of my recent Bombay trip where we drove by the enchanting Juhu Beach, lined with celebrity homes juxtaposed against populations of bus riding gentry and petite shops. A place where street food deserves worship. Pani puri is my favorite Indian snack food, a pickly and sour combination of flour spherical shells – delicate, fried and hollow – filled with potatoes and spices which you have to manually insert by cracking the flour shell with your fingers and praying with the other hand that it doesn’t shatter altogether! The next step is to add cold, tamarind infused minty water to it and shove it into your mouth before it gets the better of your shirt and chest. At Vermillion took this concept and gave six shells in an earthy banana leaf mini-container, which I felt looked sore on a lengthy white plate with a milk pitcher of minty water. But, at least the flavors were right! With the audible crunch of the shell and marriage of spice (which however I could have done with more of) and cooling mint, it was a refreshing punch in the mouth, which swept my sleepy eyes out of their coma. 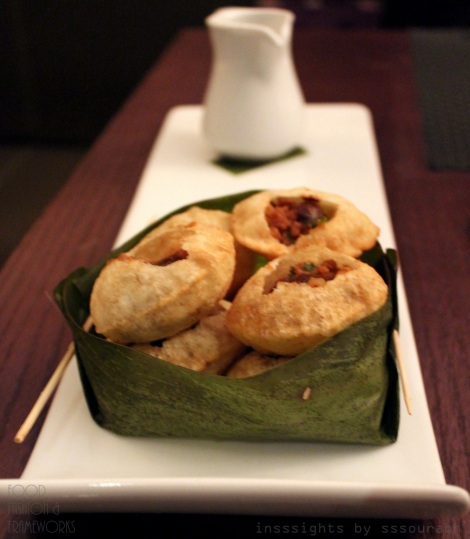 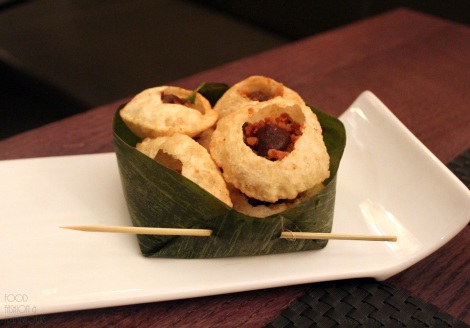 Unfortunately the rest of the food arrived rather cold, owing to our infatuation with food photography, combined with a peek into the kitchen which showed that our food had been ready rather immediately but not brought out. Not the best of customer service, but at least the dim voiced staff was not ferocious about it, and did offer to return and replace one of the sordid plates with remarkable ease!

Two dishes arrived on one large white plate, for apt photographing. The first was Gobi Portuguese, and while I am on the fence with cauliflower, the coconut pangs in the rust hued sauce left a delectable taste on the tip of my tongue. It was quite bitter, which is a favorite flavor profile if done right, and matched well with the semi-solid cauliflower trees. While probably more Indian than Portuguese, this was comfort home food at one of its finest. This hunk’s comrade, the tomatillo gazpacho on an eggplant fritter, was akin to a gorgeous arm candy that is there for show purposes only (think Oscars awards ceremony). Looking radiant, the eggplant fritter was the central circle of the lady-shaped vegetable, with a crisped, royal purple radius and a bright green tomatillo sauce in the center, complete with seeds. But just like the damsel arm candy stereotype, this one had nothing more than its good looks. The critter was overwhelmingly oily and left me panting for water or a squirt of lime, which I did not get from the tomatillo sauce. The sauce itself was cool, unsalty and gelatinous, probably better with a dip. 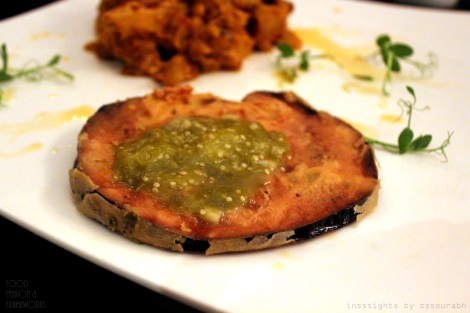 The one mishap we ordered was the misleadingly titled an avocado escabeche. While I’m fond of avocado, I’m not a guacamole guy, which naturally indicates that I only inhale avocado when it is part of a choir of other flavors. However this was a butterfly of slices from an entire avocado. It was under seasoned and doused with a sliver of mint mango chutney which tasted delightfully homemade with juxtaposed tangs of raw mango and cool mint. Something that I would order as a condiment alone! It was also sprinkled with a few disproportionately small cubes of what was called mango curry leaf salsa, which was more fruit salad than salsa. While impeccable eye candy, it probably brought to mind the notion that all body but no soul is often unattractive, no matter how much your eye may deceive you.

The ginger mint naan was as exemplary as normal – nothing over the top but not dismissible either. While I won’t say you can never have bad naan – for I have grimaced at rubbery visuals and gnawing textures before – it would have been helpful to add a punchier flavor of ginger and mint alike, which showed up as toasty bits on top. For I heart ginger!

No semi Indian meal is complete without my love for paneer, a form of cottage cheese which is also trending this year. The paneer tikka was gigantic,  owing to the humungous cuboids of perfectly charred paneer. The blackened edges were doused with lemony accents and visibly red spices glistening like rubies in the rough. The paneer had a crispy exterior and a spongy interior, where one bite waltzed me into mommy’s kitchen pleading for more. My only complaint was that there wasn’t more of it! 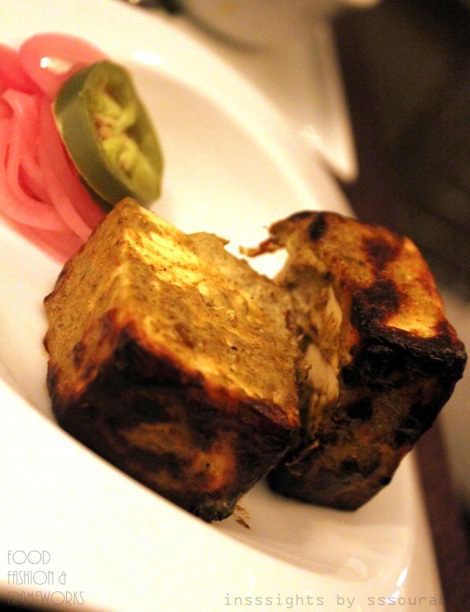 And so ended a fusion meal, sans dessert courtesy of a day spent inhaling it.

I read that Dey had chosen to muddle Indian food with Latin cuisine due to four key reasons: the commonality of ingredients like coconuts and guava and tamarind and the likes, the historical cross influences from the Arabs and Persians and such, the admittedly family oriented happiness in both and to create “intellectually provocative and unique cuisines”. While it is a bit of stretch to say that my meal was a revolutionary synchrony, it certainly took several admirable steps into the fantastical, gastronomic world of food experimentation, which in itself is an accomplishment in a world that’s trying to become like everything else.

This is why I crave and epitomize juxtaposition.