Creating a shimmering history can be an endeavour, especially in the bustle of a shiny fashion capital. But Muslim designer Anniesa Hasibuan completed it, twice in a row.

Last season, she was the first Indonesian to have a show at New York Fashion Week (NYFW), and the first to showcase a collection where every model sported the traditional headscarf called a hijab. Akin to a Dubai fashion show by Nova Krishnan that I had attended, this was a unique point of view. And this season, she continued with demonstrating pizzazz and personality on the runway, with an emblematic ‘A’ on several pieces.  The designs were a luxurious rendition of what she was familiar with in her hometown, Jakarta, where hijabs were worn with suits, kaftans, tunics, and virtually every attire, complete with silken and shimmering fabrics. The show was also cast with first generation American and immigrant models, showcasing the American dream, and a subtle form of giving a political opinion, a trend in this season’s runway shows. 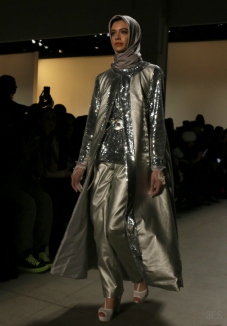 Almost like the rise and sequence of a day into sunset and nightfall, the collection began with sparkling whites, sashaying into golds and ending with blacks. The theme of the show was ‘DRAMA’, inspired by women who are capable of changing weaknesses into strengths by power and ethics. Like last season, every outfit, from head to toe, was a woman adorning variations of the hijab. The scarves themselves stayed relatively unadorned while the rest of the outfits were accessorized with Swarowski crystals, brocade blazers, heavy applique work with pearls, sequins, beads and intricate embroidery, inevitably making the hijab a high-fashion runway accessory of sorts, and a major focal point. Modesty was once again proven to be dazzling and sexy. 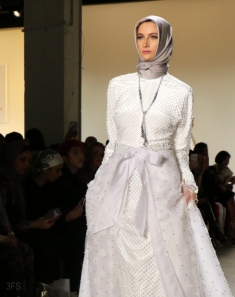 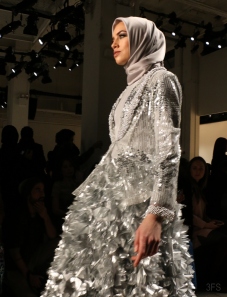 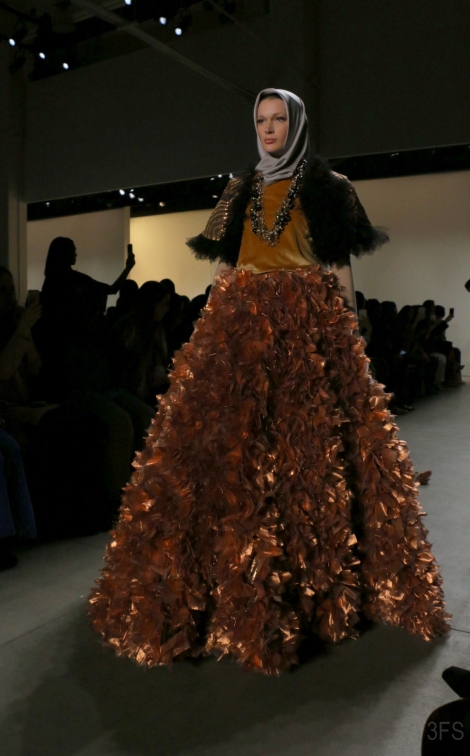 The collection commenced with white and silver pieces, brocade and net gowns with pearl embroidery, pleated skirts with sequined blouses and cinched silver metallic belts, white velvet winter coats and faux fur shawls that graced the runway with glitter and grace. A pearl collared sequined cardigan made for a spectacular layering piece, and a silver feathered longline coat was an easy red carpet statement piece, as was an ethereal translucent pearl dipped overcoat. The sheer variety of fabrics and glistening embelishments made for an applause worthy start to a stellar show. 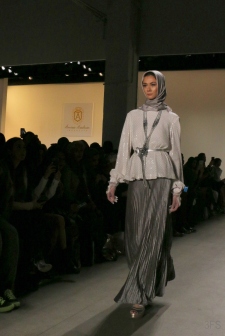 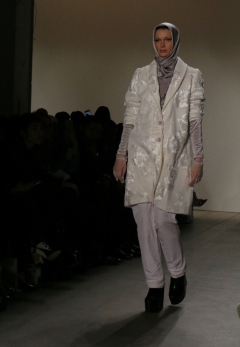 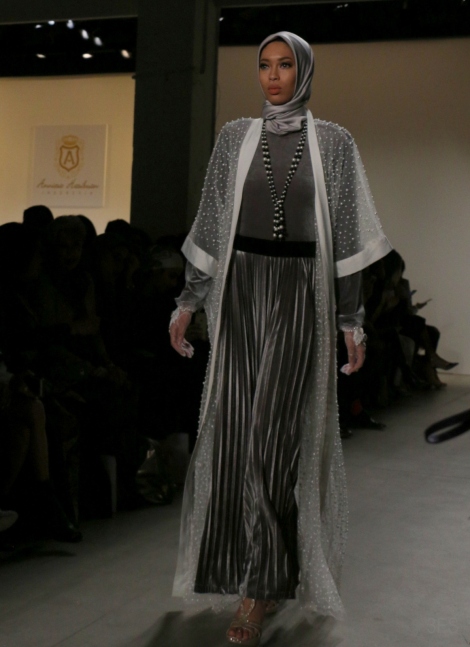 Luscious fabrics of gold, bronze and rose gold followed, almost like the setting sun. As a fan of layering myself, it was inspiring how blazers, with velvet appliques, were incorporated into dress or pant attires for a stunning and more formal look.  Pairing the hijab with a menswear staple, the blazer, was one of my favorite juxtapositions of fashion week. Heavily sequined jumpsuits and skirts, blazers and dresses, often paired with copper belts or rose feathered skirts, with one particular dime sized sequin cape, all seduced the eyes. The gold tones got more vibrant and metallic with tonal printed skirts and pants, pleated skirts and metallic feathery vests of sorts, pearl and brocade corsets and a variety of separates that could be paired together in relentlessly creative combinations. Several former designs made a comeback in warmer tones like my favorite translucent pearl coat, a feather sleeved jacket and a blouse with detailed pearl lapels, speaking highly of commercial viability. With gold as a favorite color, my front-row self was melting in the opulence of the progressive collection. 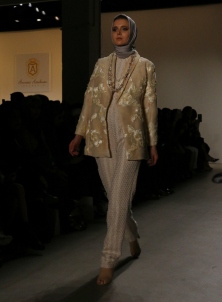 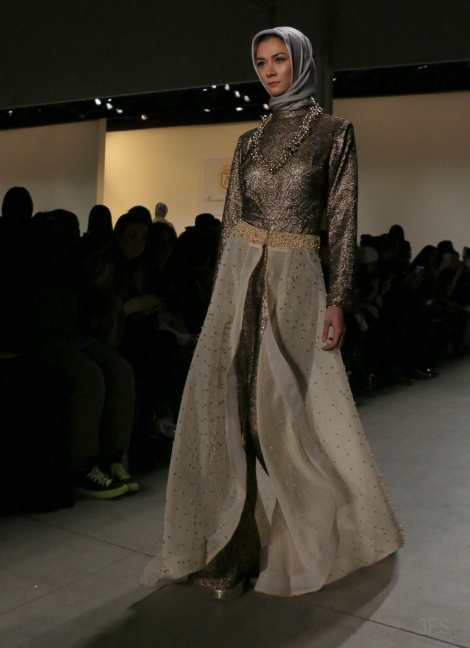 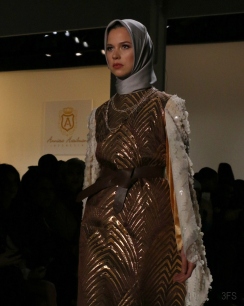 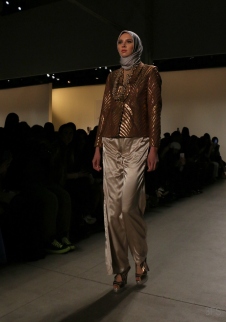 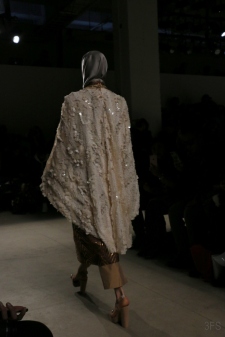 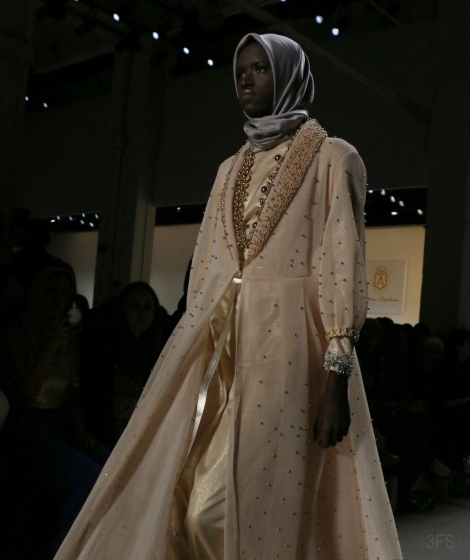 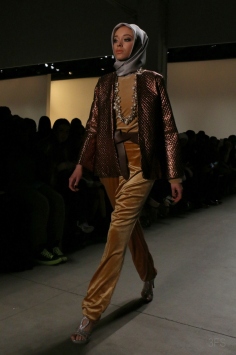 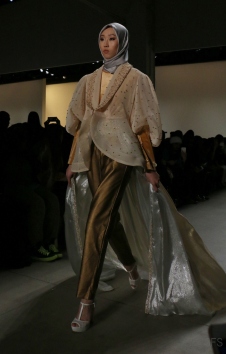 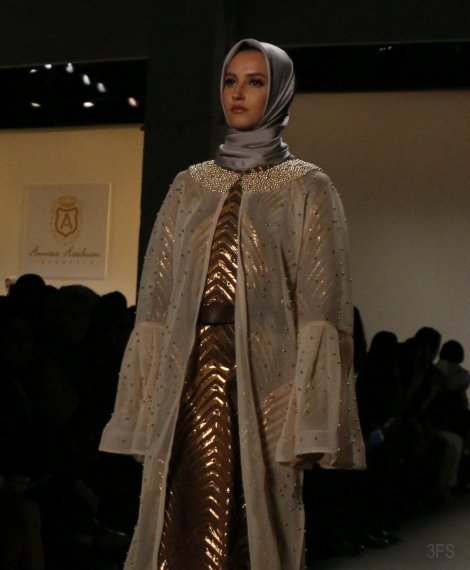 The sequence ended with a black collection, likely for the night. While not my favorite hue, I enjoyed seeing the sequin and pearl embelished tops, skirts and capes, all of which were in synchrony with former designs, but hid the details in their dark tonality. Many of the looks even had leather or lace gloves that were embelished with Swarovski crystals and intricate beading. The letter A stood out more prominently on the black outfits too. 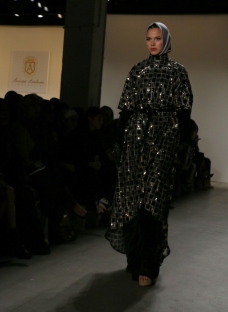 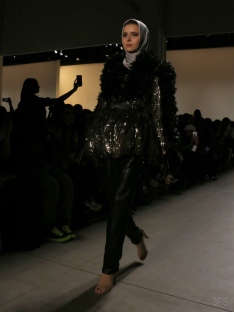 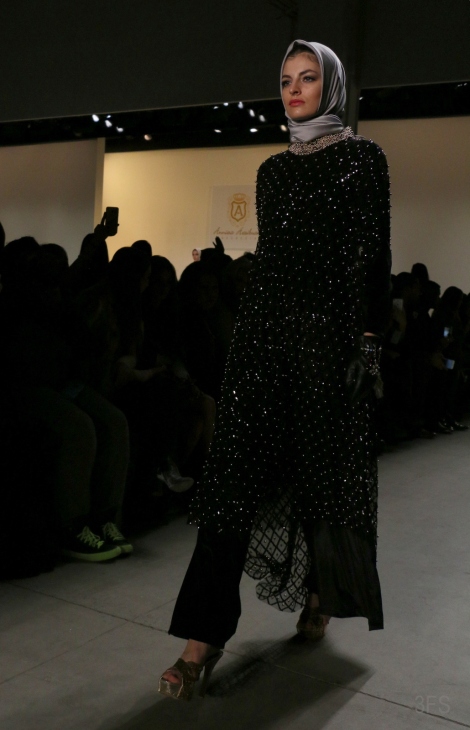 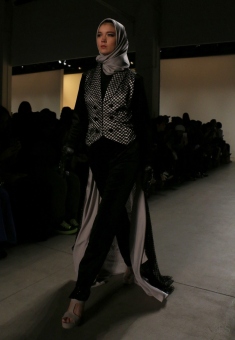 The collection had an applause worthy and overwhelming visual impact on the runway. With real cheers from the crowds, the designer received a standing ovation. The hijab was successfully made into an accessible feature, combining distinct worlds that blurred the lines of culture and couture, so relevant in this climatic season, and a true testament to unity.

8 responses to “Shimmering in Strength and Glittering in Grace: Anniesa Hasibuan at NYFW”