Creating history in gold is a challenging task, especially in the bustle of a shimmering fashion capital.

Muslim designer Anniesa Hasibuan was a woman of many firsts: the first Indonesian to have a show at New York Fashion Week (NYFW), and the first to showcase a collection where every model sported the traditional headscarf called a hijab. Akin to a Dubai fashion show by Nova Krishnan that I had attended, this was a unique point of view on its own, and stood out from the rest of the collections. The designs were a luxurious rendition of what she was familiar with in her hometown, Jakarta, where hijabs were worn with suits, kaftans, tunics, and virtually every attire, complete with silken and shimmering fabrics.

Every outfit, from head to toe, was a woman adorning variations of the hijab. The scarves themselves stayed relatively unadorned while the rest of the outfits were accessorized with crystalized eyewear, brocade blazers, heavy applique work with pearls, sequins, beads and intricate embroidery, thereby making the hijab a high-fashion runway accessory of sorts, and a true focal point. With several designers this season picking up on the sequined trend from Naeem Khan to Monique Lhuillier, Aniesa Hasibuan created a multicultural collection that used the facet of sparkle to tie everything together. 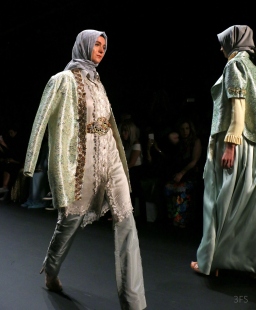 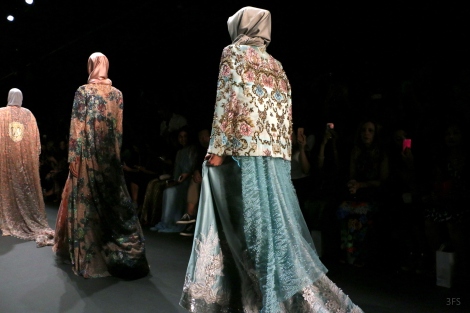 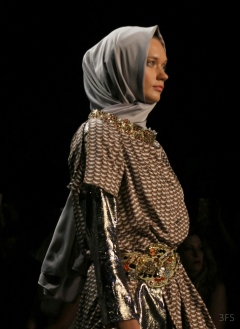 The collection constituted of a plethora of pastels as a base palette to work the magic of gold on. The models started with quintessentially feminine pinks with dusty rose and pale lilacs, these were all upgraded with gold embroidery, lace finery, pearl embellishments and all things sparkly. There were velvet skirts, silk gowns, mesh capes, pinstripe jumpsuits, shimmering dresses, all encrusted with details that left the eyes cheering for more as the hands rose in innate applaud. Some flowing capes held down by beadwork to add a weight that played with the runway air.

As a fan of layering myself, it was interesting to observe the way Anniesa Hasibuan played with layers. From flowing capes to short, solid ones embelished with pearls, she moved on to pairing the hijab with a menswear staple: the blazer. I have personally seen this combination before, but her blazers were elevated to an ethereal level with heavy gold embellishments, silk taffeta fabrics, shimmering brocade paisley prints, gold thread embroidery and bejeweled accents, giving them an sharp, queen-like feel. There were other ways she layered too, like longer coats, blazers paired with skirts instead of trousers, or with long tunics. Two particular combinations I liked were a blazer with a pleated skirt and one with layers of mesh and embroidered gold fabric. 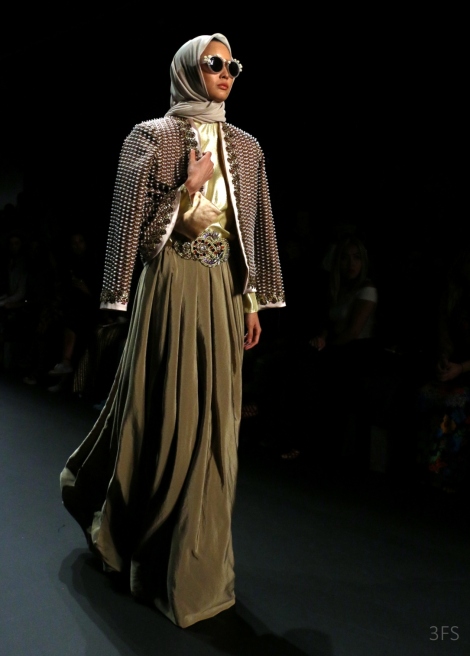 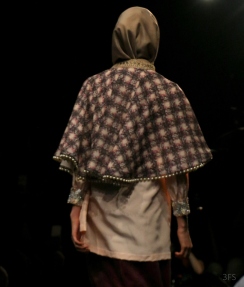 Pastel blues and pale teals were another mainstay in her collection. Silk pajama style pants were paired with tunics and belts, and the blazer and coat trend continued with all its glitter, sometimes using silver instead of gold to complement the blue. The hues transitioned to a sea green palette, which worked beautifully with the gold in satin jackets, gold encrusted ankle-length coats, and detailed necklaces and belts. While heavy handed with the gold and finery, it did not look jarring, but rather worked in synchrony to relay a multicultural sense of couture. 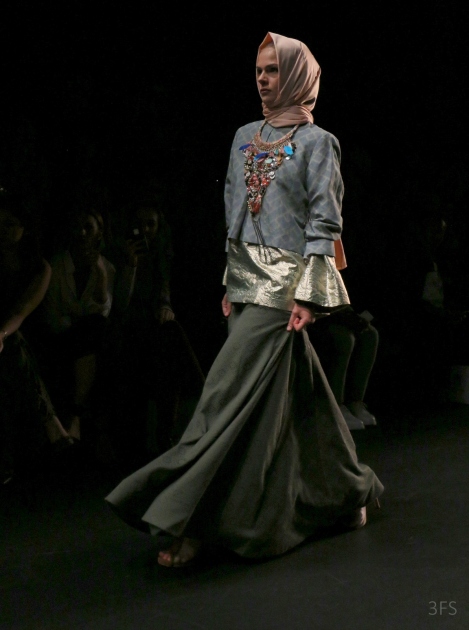 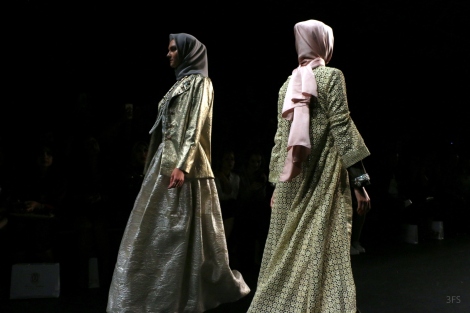 The evening ended with a series of silk kaftans and robes, many of which had extended trains. The walking gold silhouette of her showstopper was both heavy and heavenly, with visible results speaking highly of the craftsmanship. Other lighter ones caught the runway air to give stunning photo captures of movement. While taking obvious cues from her Indonesian culture, these styles brought Indian workmanship and fabrics, some Turkish color schemes, and an almost French and British royalty gown style to make it a multicultural melting pot. 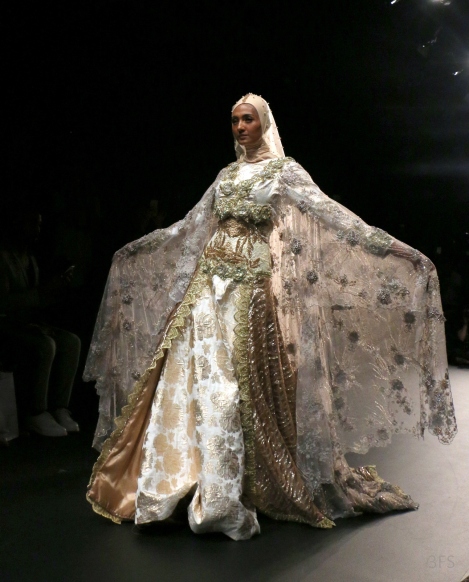 The collection had a bold and overwhelming visual impact on the runway, leaving many stunned and gasping for more. With real cheers from the crowds, the designer received a standing ovation, too. The emotion and hard work behind her collection was evident, and paid off brilliantly. The hijab was thus made into an accessible feature, combining disparate worlds onto a platform that blurred the lines of culture, style and couture. It was truly a pleasure and an honor to witness this  true testament to unity.

The gold and shimmering designs of @anniesahasibuanofficial with every model in a coordinated hijab. #NYFW 👉🏽 @fashionbysssourabh