In a room full of art, I’d still stare at you.
The era of romantic maximalism may be over, but I stumbled upon a wonderland that conjured it back to life. Almost like a well stitched dream sequence.

Most who know me know my penchant for all things Italian… particularly the people, and the places. As a fashion inspiration for a succulent menswear show, Rome has graced the runway before. And Stacy Bendet traveled with artist Lola Schnabel, too, as inspiration for the SS17 collection of the romantic line Alice and Olivia at New York Fashion Week (NYFW). In particular, she was captivated by the Bomarzo gardens, often called the Park of Monsters (Parco dei Mostri), with a 16th century charm of goth and beauty.

This became the inspiration, combined with the 18th century tarot cards and the elements of moon, earth, sun, air and fire. So much so, that the presentation was sequenced into seven different groups of sumptuously dressed women, each potentially representing a different area of Bomarzo, and perhaps even a different and delightfully feminine destiny from a tarot card. Overall, it was a modern twist on vintage romance, upgrading the belle Italian woman to her city centric future. I would call it romantic maximalism: an ode to everything saccharine and sweet about the rush and gush of hearts. 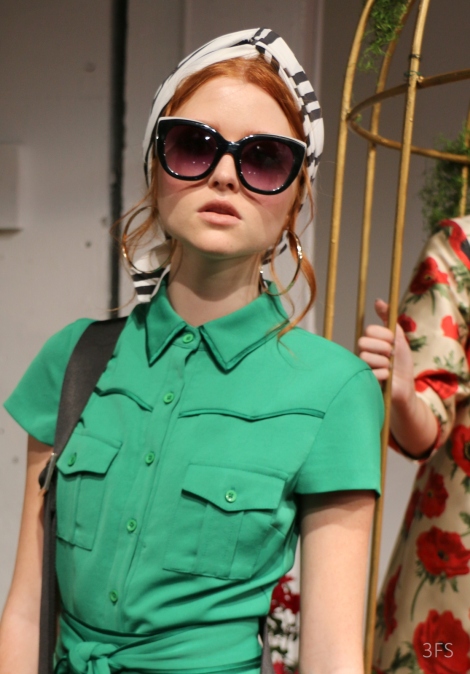 It started with an almost Alice in Wonderland type feel, with rose petals strewn over a bed, vying into adulthood with a model seductively poised in an indigo and black off shoulder halter dress. The simplistic ethereal look made way for layers of embroidery and applique work. My favorite was a dragonfly jacquard blazer in rose quartz pink, with a crystal embelished boyfriend shirt, a matching mini skirt and an oversized white bowler bag. The sunglasses marked a debut of Stacey Bendet’s eyewear collection. 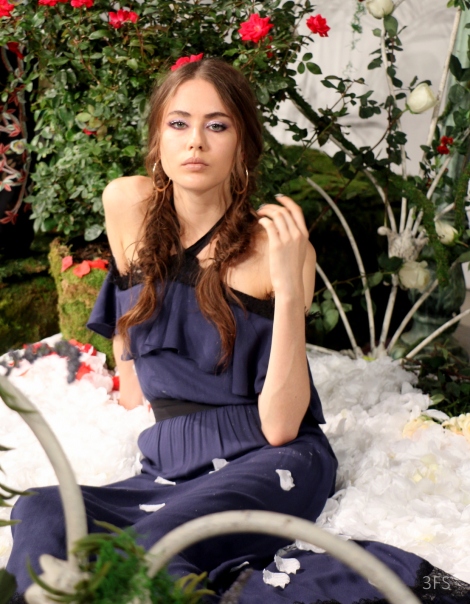 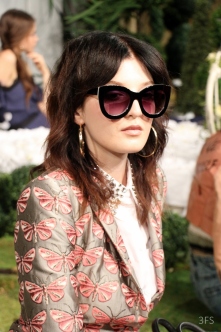 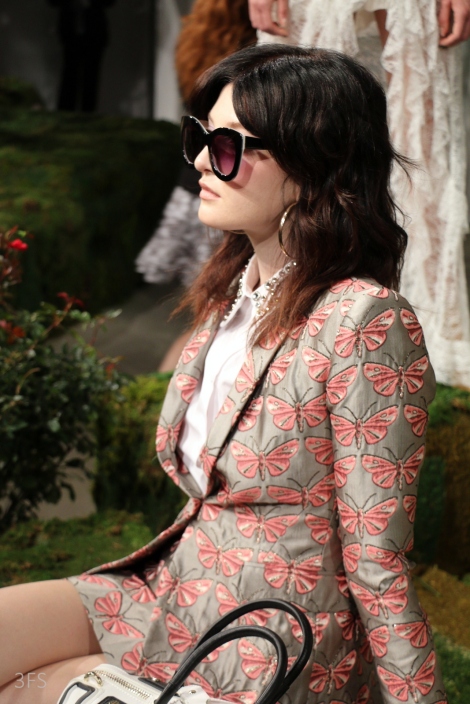 A black studded leather crop jacket juxtaposed with an embroidered floral spaghetti strap gown was a mix of biker girl meets bohemia, enhanced by other looks like an embroidered oversize coat paired with a dusty rose mock sweater and matching lace up espadrilles. The embroidery on this coat was stunning, literally three dimensionally glinting off the model’s moves. While the rose theme continued with a pink long blazer and an embelished bustier with flare jeans, I was drawn once again to the rich embroidery on a black oversize bomber jacket worn with a wide leg strapless jumpsuit. Combined with ‘morning after’ humungous eyewear, these pieces juxtaposed a vintage mood with modern touches seamlessly. 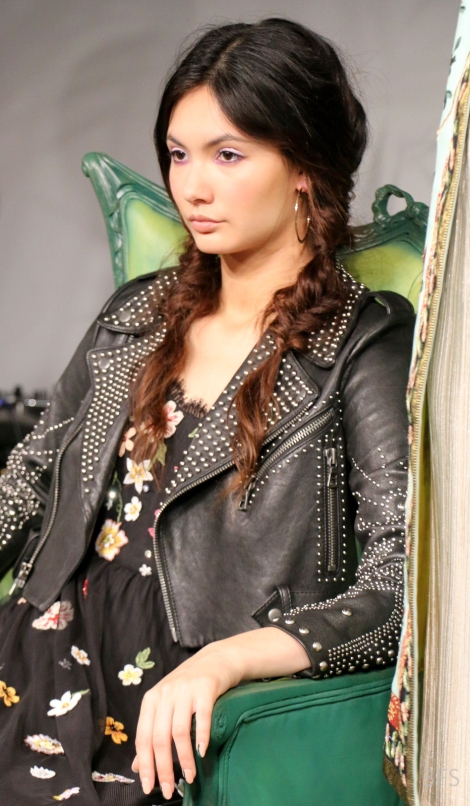 A dusty rose jacket with leather lapels was a clear take on the modern biker chick, complete with a crew neck sweater and short crystal studded high waist denim shorts. The jacket stole the entire look, with the model itching to free herself of her petal paraphernalia and into the world of wheels! The lace gown, a staple in almost every collection, was perhaps the only thing not quite matching, despite another juxtaposition with a cropped denim jacket in vintage wash. 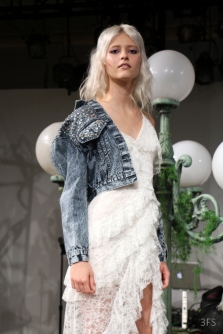 Stepping right out of the tarot cards were a series of girls in their simplest of gowns, sans sunglasses. A gown printed with the flora an fauna of the Italian landscapes reflected like magic into the crystal ball setup. Strewn with tarot cards, it was in contrast to the simpler cream lace gown. Dripping with stories and soirees, the pair of looks were the most ethereal and evocative of the show. 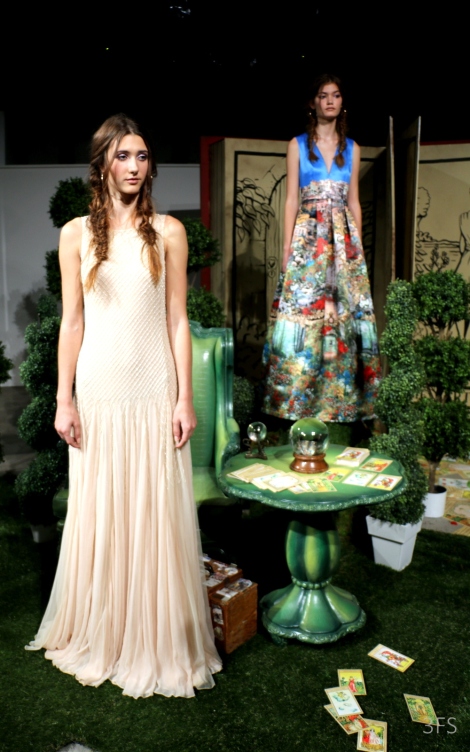 With a literal explosion of colors for the eyeballs were a plethora of colors and embelishments and embroideries intertwined in vines. I immediately loved an embroidered bell sleeve tunic and an embelished red mini dress worn with an embelished motif bomber jacket and a casual cross body bag, giving a hip vibe to a morning-after outfit. An embroidered beige blazer with popping mint green and orange florals with matching shorts and a boxy red floral shirt was another stellar look for the modern bohemian who meant business in the daytime! A lavender cross body bag seemed a tad out of place, but melted in the color explosion. 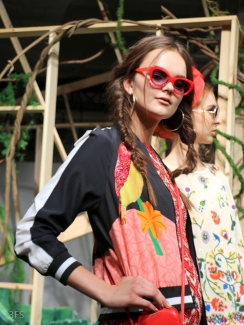 Blazers were a big deal with these damsels, with a green collarless blazer paired with an embroidered blouse and heavily embroidered jeans with motifs of eyes and hooks with wings and a plethora of florals. The florals continued with a pretty frock of sorts, complete with lace hems and a headscarf for a throwback to childhood innocence. 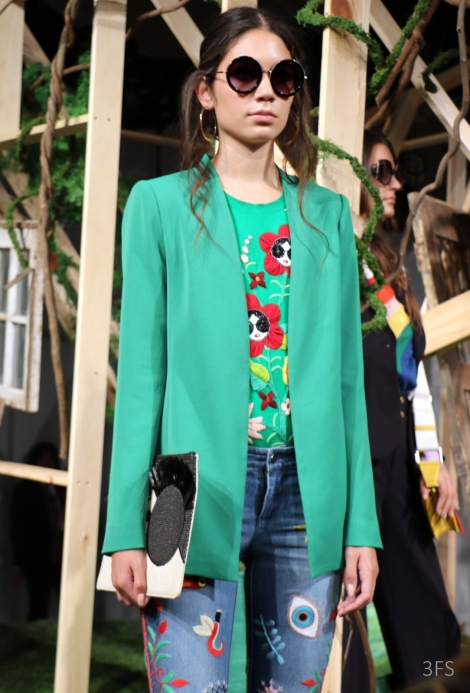 As if paying homage to a rainbow generation of sorts were two looks incorporating the rainbow. One was more subtle, with a navy double button blazer, a rainbow pullover sweater over a blouse, and a navy high waist pant. The rainbow cross body bag was eye candy here, giving way to the nymphette next door, literally, who wore a rainbow tiered gown that evoked every imaginable vision of fairytales. 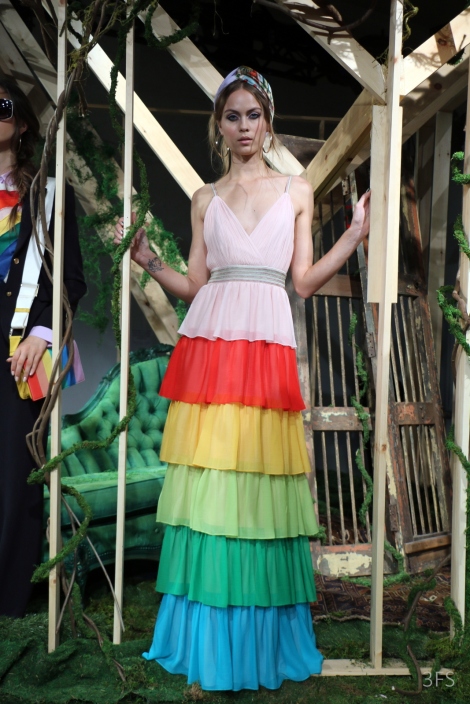 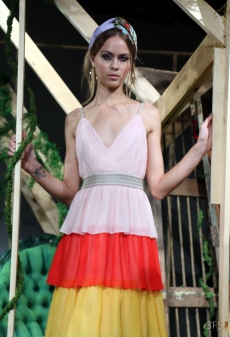 Almost as an homage to the classic styles was an entire set up of black and white hues – or almost so. Set in a well built garden complete with Roman sculptures and cracked awnings. The showstopper was an embelished ball gown “Stace Face” skirt, paired with a black and cream crossover tank and the signature glasses. Clearly a stunner in every possible way, with audible jaw drops heard in my surroundings!

Jail-stripes were featured aplenty, either as full on dresses like a ruffle sleeve dress (which had the best pair of crystal encrusted floral sunglasses I had ever seen), or as headscarves. These featured prominently with a long lace vest with matching wide leg lace pants with an embelished crop bustier, as well as with a collared maxi dress with flats. Both had an almost Parisian flair to them, with the models looking ready to hit the cobble stoned runway streets. Possibly the only red in the collection was named poppy: a poppy tie neck top with high waist wide leg pants and a frame box bag. What’s better than a combination of my three favorite colors with minimalist stripes? 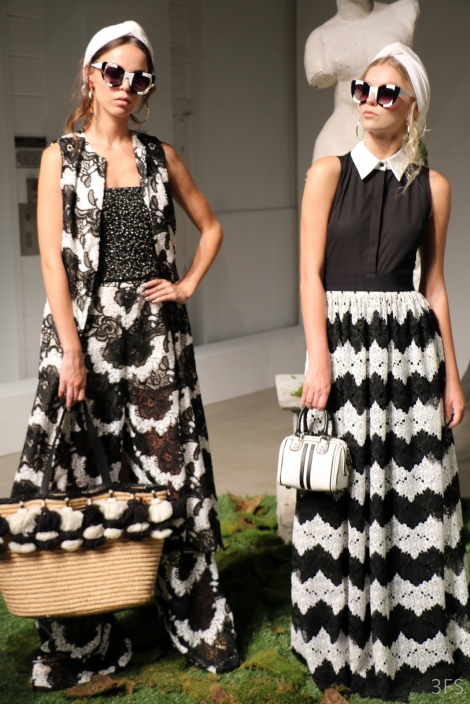 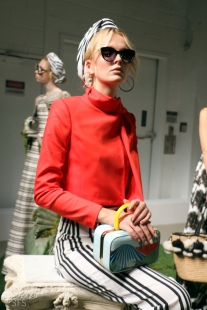 Roses are Red, and Poppies are Too

With a literal carpet of roses, the next group of damsels were a visual delight with a heavy floral inspiration and interpretation. The focus was a damsel stuck literally in a golden cage, wearing a red ‘poppy’ (versus rose) jacquard bell sleeve coat with a matching pleat skirt and shocking red sunglasses. The look was ethereal and perfectly spring like. 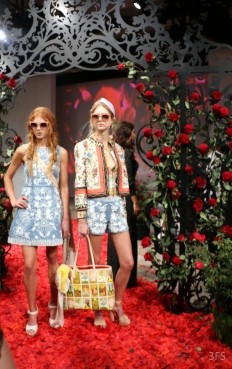 The love of lace, embroidery and embelishments continued with a champagne embelished leather crop jacket paired with a tank and flared camel gaucho pants, as well as a duo in heavily embroidered denim shorts and a farm girl dress; the former also included a heavily embroidered suede blazer. The looks were lighter, breezier and beachier, almost evoking the itch for a luscious, luxury road trip through the Italian Riviera.

The two monochromatic looks that brought eyewear to the forefront were a white off shoulder ruffle crop top with high waist pants, and a green short sleeve pleated shirt dress. Both had dual toned sunglasses which the models coyly showcased in a “Talking to Me?” attitude which was eternally alluring. 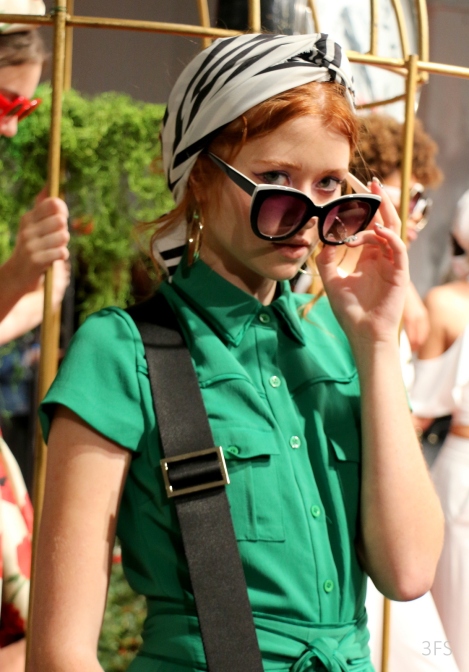 The next group was what I would label the traveling damsels, for complete with a bullock cart strewn with romantic roses and vines, the girls adorned the likes of peasant dresses and peasant maxi dresses, as if stepping right out of a fairy tale before turning into princesses. These had an almost Indian border to them, glimmering in silver and faded red.

Dresses were a mainstay, with an embelished white strapless dress with blue sequins and a gold and blue thick hemline border. The look was repeated in inverted colors as an embelished bustier with wide leg, almost harem-like pants, complete with Indian style silver metal zardosi work. 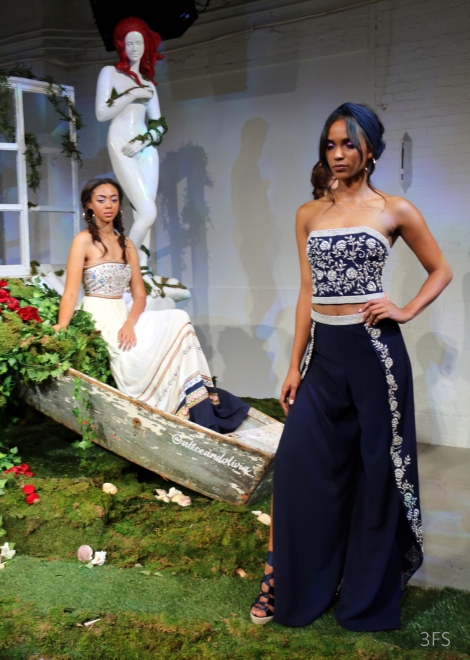 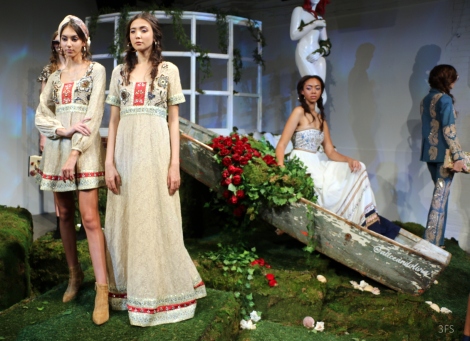 Interestingly, for women who travel in blazers in pants, were two more formal looks. The plainer one was a cream longline blazer with matching pants and a standout “The Lovers” bag paired with see-through eyewear. But one of my favorites was a heavily lace embroidered denim blue suit, complete with gold and mirror work detailing across the blazer and pants, once again paying homage to my Indian roots and pulling off a blend of Bohemia, country and city-centric sensibility to perfection.

A departure from the belle and svelte were the more edgy group of girls, with a painted graffiti backdrop to match. With an “Always Right” embroidered moto jacket and Maleficent style catsuit, distressed skinny jeans with crystal embelished pockets and an embroidered boyfriend shirt, alternated with skinny jeans with “Loving You” embroidery, these girls showcased the power of womanhood, having an edge over their men, and very simply, custom embroidery.

Perched next to them were the antithesis: three monochromatic models in a black ruffle dress, an asymmetric white off shoulder dress with a headscarf and red sunglasses, and a model in a skimpy asymmetric red gown of sorts. With a lack of embelishments or embroidery, these perhaps spoke to the future of minimalism and the haute couture of cuts and asymmetry, leaving me longing for the Aphrodites that the rest of the collection had presented.

It was evident that Bendet had put in much thought to conjure up a romantic Roman themed collection, referencing every woman archetype from feminine to sexy, angelic to devilish, and everything in between. With an homage to romantic maximalism, elevated greatly by the impeccable set design, this was truly a lesson in weaving dream sequences.

26 responses to “Romantic Maximalism and Dream Sequences: Alice and Olivia at NYFW”