Clean being one of those adjectives that can be interpreted interestingly. And interesting being a word that sways between offensive and encouraging all at once.

I am definitively into trend spotting and keeping being abreast with consumer mania – be it fashion trends of the year, food forecasts, or simply social media behavior forms and reforms.

Eat clean is one of these buzz words that has always been associated with six packs wafer thin rock hard bodices that shudder at the gaze of chocolate and melt in the hands of asparagus. Or perhaps it’s the uncanny rhyming of the phrase with gym boxed words like mean and lean. And who knows where bubbly fits into this equation?

Don’t get me wrong, I don’t condone healthy eating: my Instagram alone should showcase that I too contribute to my flexfriday and fitness hashtags with sumptuous food that’s simple, elegant, and well yes, clean. However, since we cannot always shake off notions of stereotyping, eating clean isn’t considered a quaint and merry lifestyle, but rather a brute force out to destroy legacies of fine dining in one strike. The hipster of culinary, you could say.

However, who knew that eating clean could be so glamorous?

After a hike up Telegraph Hill, observing skylines of San Francisco’s ethereal bay, exposing many opportunities for lookbook fixations, fellow foodie C3lsius and I began to make our way down the hill.

At the foot of which, in the historic North Beach neighborhood, was a rather timidly named place called Park Tavern. Ironically situated opposite an iconic and overrated brunch place that I won’t mention but may scribble about later. Greeted by its almost Midwestern décor of leather and studded stools and hunting game wall décor, I was initially taken aback. A situation that was going to change shortly. 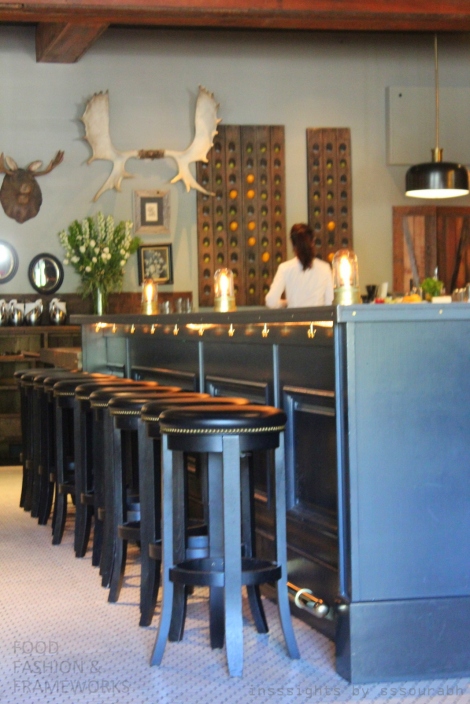 The Prosecco with a swirl of lemon peel, and the pomegranate lychee mimosa begged to differ from their unclean setting. Arriving in perfectly translucent bubbly tact and in fashionable ombre respectively, the sips were rewarding after our rather unsporty but nonetheless tiring walk.

And then arrived one of the main reasons why California entices me to settle in its arms: avocado. A browned toast was topped with warm, grilled avocado, chili flakes and sea salt. A combination that screamed clean owing to its 4 ingredient simplicity. And how sumptuous it was!

The cooling avocado flirted delightfully with the warmth of the toast. And the subtle sweetness was a fiery fight with the specks of bright chili flakes, a battle that continued with the taste buds but held up an addictive repeat value. 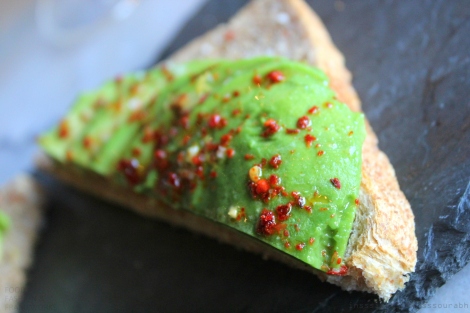 And the finale to this two course meal (eat clean, remember, is a subtle synonym to eat less, with less being a synonym for moderation) was a crowning jewel. We are all aware of my addiction to grapefruit. Imagine that, quadrupled with my love for all things sweet and desserty. For what arrived next were bruleed grapefruit with brown sugar and herbs. To say that the plate was delightful would be an understatement. 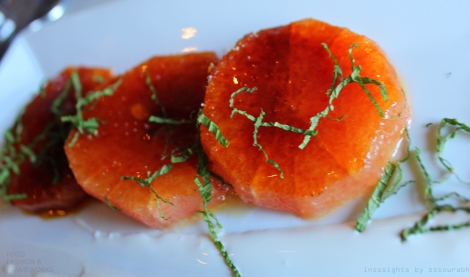 The grapefruit disks literally gleamed like mirrors with a thin, crisp layer of caramelized sugar on them, one that was painful to slice but delectable to crunch.  While I didn’t care too much for the mint yogurt sauce that it came with, the pool of sweet caramel that had collectively descended to the bottom of the plate was literally lickable. And yours truly licked the plate vertically clean. 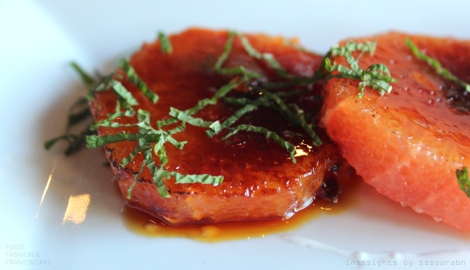 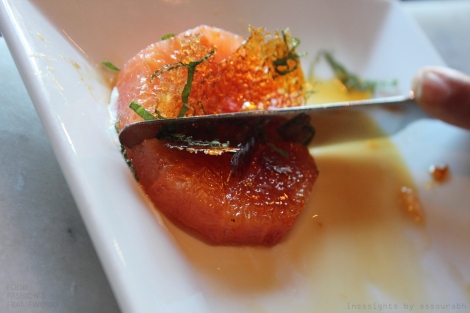 And thus I discovered that eating clean need not strictly by a motto for provoking with muscular tonality, but can be a beautiful synonym for simply delicious food. Especially avocados and grapefruits, two of my favorite sunny, palm tree backgrounded edibles.

And so, naturally, eat clean.

32 responses to “Of Avocados and Grapefruits in Sunny San Francisco”