What’s stronger than Tokaj wine, I once thought?
And I was introduced to Tokaj syrup.

In the same way, the vicarious expectation from food
Makes me swoon to to delusional heights
When confronted as a tasting.

Time to slurp away. 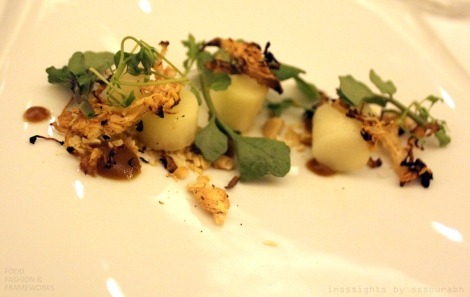 I once asked a friend what his death row meal would be, feeling uncharacteristically morbid as I was probably inhaling a congested chocolate creation. She said a tasting menu. Ironic, that this became my staple in dedicated dining establishments. For there’s nothing like sitting back and relaxing as others enjoy your palette and amuse themselves in doing so.

Having traversed everything from a nineteen course tasting to a dense five course one, I opted for another ten spaced meal in an epicurious new city of culinary love, Chicago. I heard of Blackbird by acclaimed chefs and critics of the ever popular Girl and the Goat. And on one sweltering night, it served as an escape into an Alice like world in the the understated elegance of the West Loop. The glitter of Michelin Stars in the press was not visibly apparent, adding to the comforting polish of this unobvious escape. I walked into an all white space, not quite the artist’s block that I had recently splattered with color, but a timeless, futuristic space that had won the James Beard Award for Best Restaurant Design and Graphics in 2002. A sharp orange light illuminated faces and minimalistic yet ornate white tabletops alike. 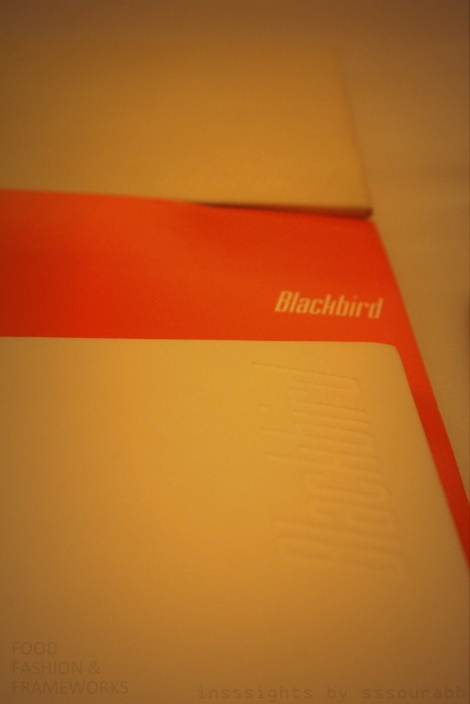 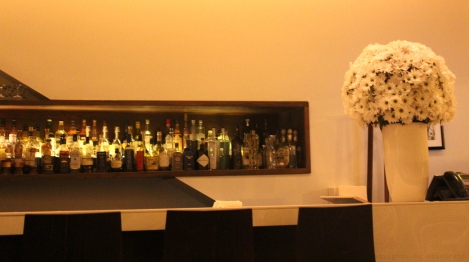 Feeling sepia like, I admired the disparate charm that Blackbird exuded compared to a parental sibling of farmerland delight, Publican, which I had bestowed a brunch upon once. Chef Paul Kahan, 2013 James Bear Award Winner, promised a varietious 10 courser of Midwestern food, trending and localized to my dietary and taste needs. The noted Best Chef of the Midwest 2004 was joined by Chef de Cuisine Perry Hendrix and pasty Chef Dana Cree, who I was to realize would redefine my view of juxtaposition with dessert flavors and textures.

And so commenced this graceful and indulgent cruise through the Midwest, where everything was a mosaic of artistic proportions, portioned into two halves and intermissioned with none other than a skinny cocktail.

A plate of crispy pita was served with a sesame seed oil glazed hummus, starting the meal off with a lightly salted, crispy taste. 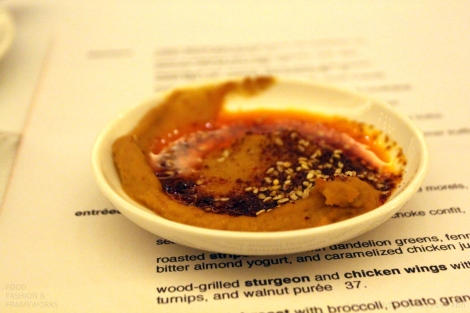 Course one was a tiny morsel of pistachio coated cucumber in a tamarind broth, a tangy kick that reminded me of a distant Punjabi meal. Without the magnanimous helpings that India is known for! 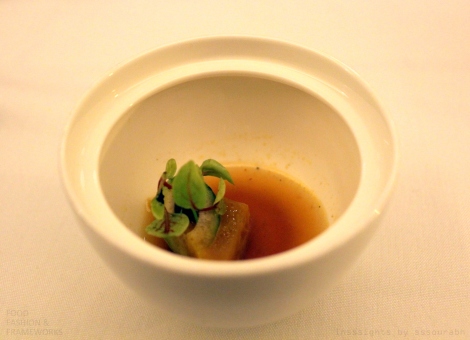 Perhaps it was the neon orange light, but the spring pea soup came looking as radiant as a beauty campaign, with a glass like flawless green texture that fashionistas would kill for. Edged with caramelized crispy mushroom and a cheese stuffed pasta ball, it was a refreshing, cold soup with a comforting lack of depth and complexity in flavor. 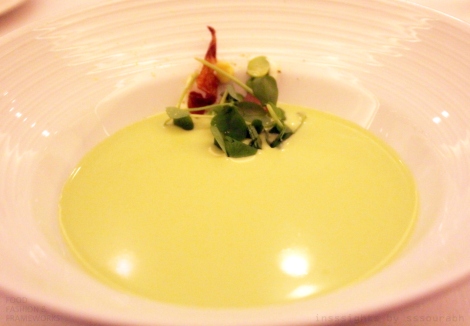 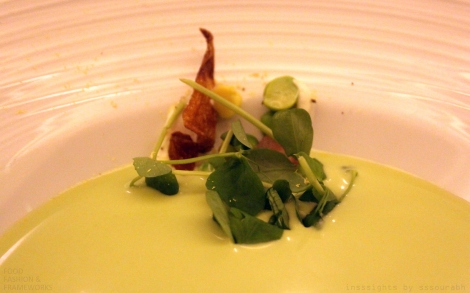 Third was a fibrous asparagus disguised in enough layers to redeem itself from a dieter’s must list, showcasing it like a fragile figment of an imagination. Covered with charred spring onion, it had dust and specks and balls of artistically dispersed yellow and white beads. They yellow was cured egg yolk which added density to the lean asparagus. The white bits were peanut pieces and hits of chamomile, almost suggestive in their arousing and sleep inducing prowesses. The collective taste was disparate from what one expects from asparagus, for this was a denser and flavor layered bite. And when I finally unearthed it, I found it to be flavorful white asparagus, which beckoned a cheeky pose before swallowing. 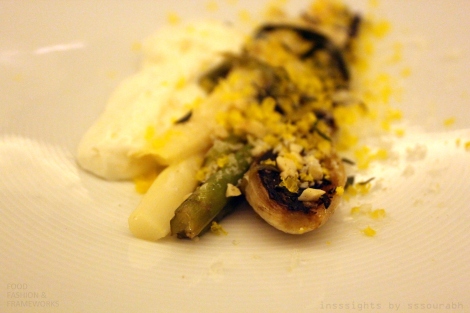 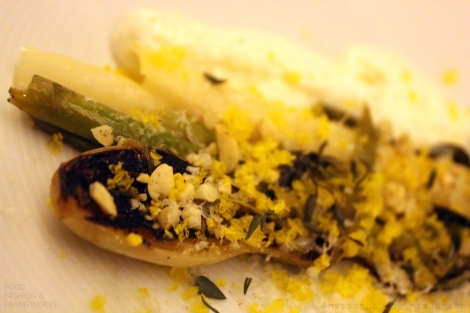 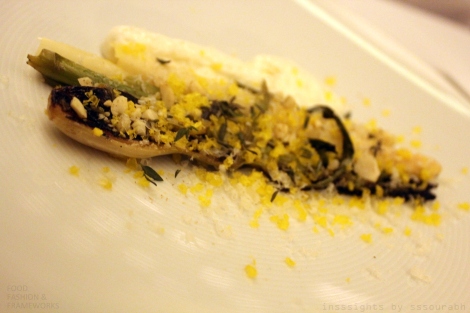 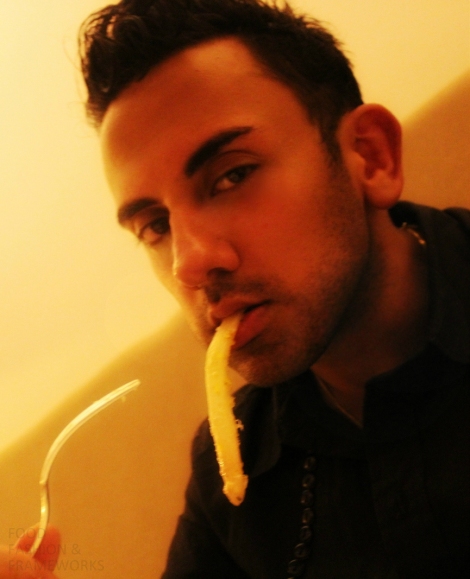 Admittedly when I heard that I was getting kohlrabi with candied onions, cashews, tamarind and watercress, I felt like it was going to be a combination of balloons at the wrong party. But what arrived was a visually appealing trio of what looked like Disney sidekicks, dressed in crispy gold colors, dispersed with tamarind sauce and green florets. Unlike the amuse bouche, the tamarind provided a much needed last kick that left the flavors floating on my palette. Texturally so far, there hadn’t been anything overarching crunchy or crispy, paying homage to the delicate art of a blackbird’s flight. 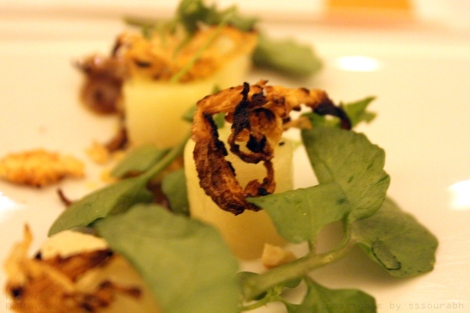 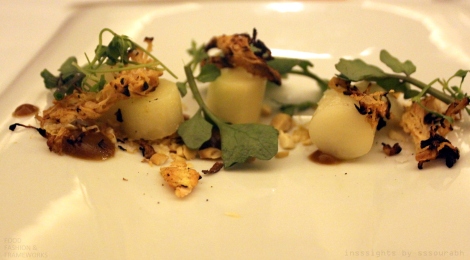 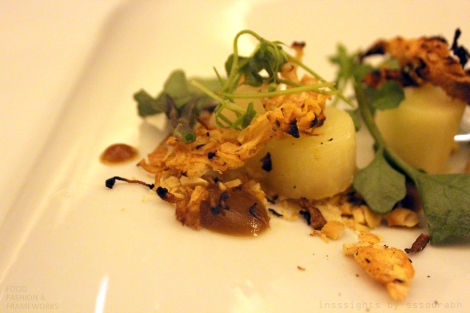 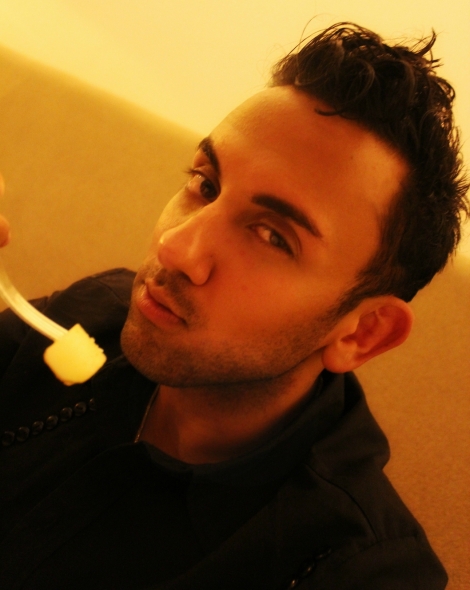 What arrived next tested my knowledge of food disguise. For what looked like seashells from a mermaid’s lagoon ended up being potato with zucchini, flooded in fig molasses and topped with ample helpings of hairy summer truffle shavings, pistachio bits and a cucumber salad. The entire construction was alarmingly reminiscent of non-food objects. The combination was an inspiring but odd one: the meatiness of the potatoes were in contrast to the gentleness of the salad, and the fig and truffle competed in a sweet and bitter competition where everyone kept playing, but nobody emerged victorious. Nonetheless, the potato and the looks on this persona made up for the confusion in its relay. 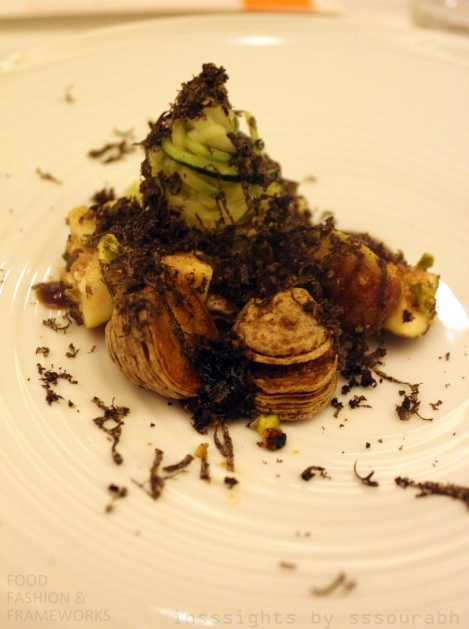 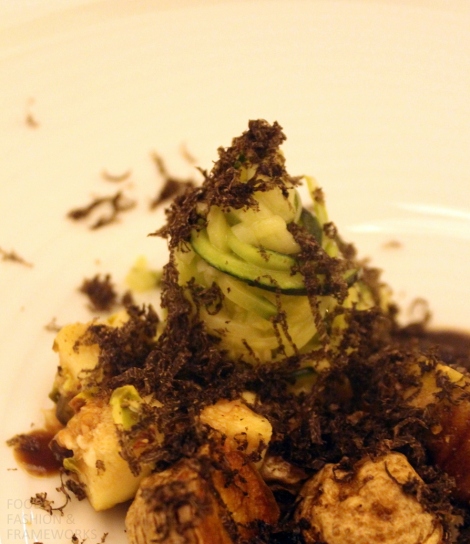 Halfway point alert: this wasn’t a rough marathon, but a gentle, delicate cruise through soothing waters.

Nonetheless, at this point, the chefs came to ask how my hike was. And having sported through fashionable adventures before, I put up a brave front despite feeling alarmingly comforted and full. They passed along a complimentary cocktail courtesy of the mixologist, an androgynous and translucent vial of Parasol: Cocchi Americano, a spicy ginger green tea, lime, and bitters. While slightly less sour than I would’ve liked, it was a palette cleanser that got my mouth ready for it’s a subsequent half of the inhalation. 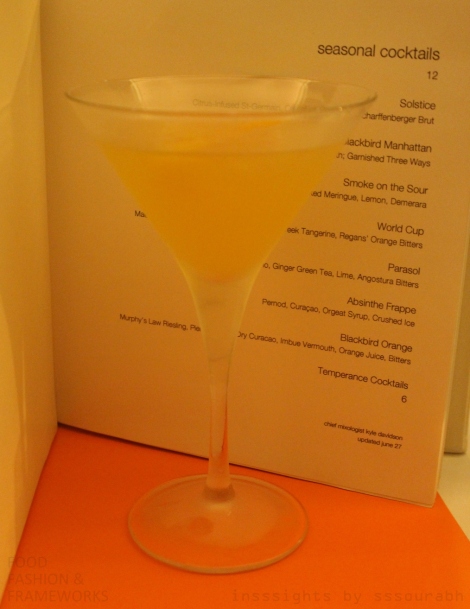 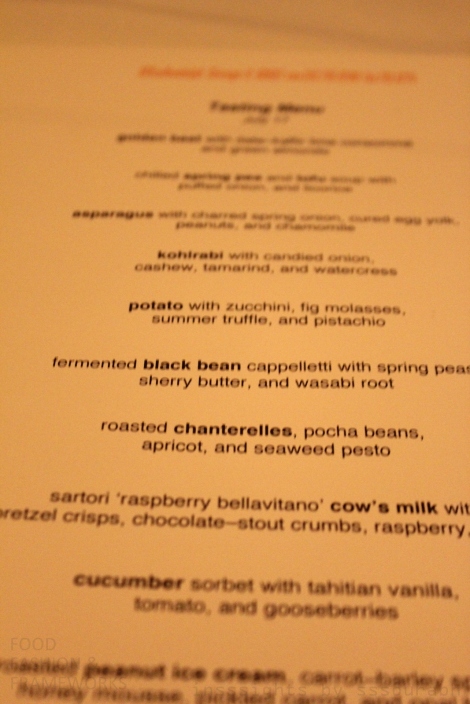 For a glass may be half empty or half full,
But when a mountain is half climbed,
It cannot equate to being half unclimbed.

On to the subsequent five courses, with a surprise for dessert.

15 responses to “Mosaics of a 10 course Midwestern Meal: Part 1”