Taoray Wang is known for designing clothes for C-suite style professional women. Many pride themselves in wearing immaculate, sharp and attractive outfits that polished, functional, feminine, but firm with the respective corporate audience. And wow, with a literal punch in the face of corporates, she delivered a solid collection at New York Fashion Week (NYFW) SS17.

Taking so-called masculine work attire in blacks, white, pinstripes and dark woody or forest hues, which had been common in the mens fashion weeks too. She consequently transformed them into powerful statements of women’s empowerment. Inspired by “Stripes, Rhythm and Direction”, she used predominantly stripes in her business tailored collection, often juxtaposing them with lace for a feminine touch. On closer inspection and research, the printed silk linings were borrowed from mandarin gowns from China, as an homage to her cultural heritage. 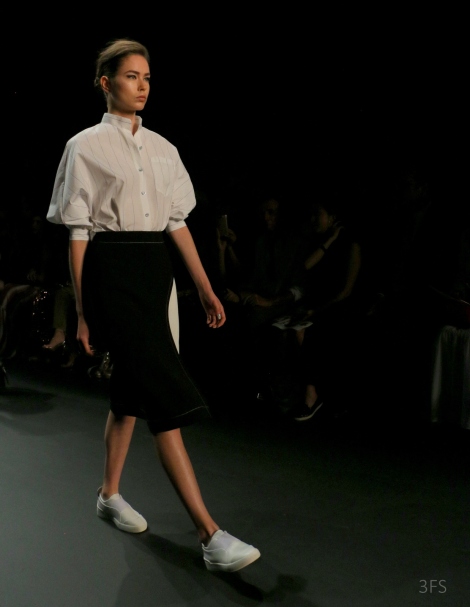 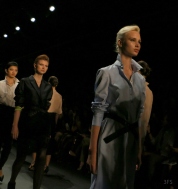 Using only black and white, with occasionally dark colors, hers was an almost menswear inspired collection, another nod to the . There were several sharp lined blazers in boxy cuts, with a plethora of wide leg, pantaloon style pants which marked the return of these leggy lasses on the runway and likely in retail. 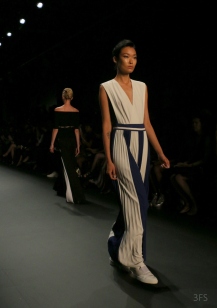 In between the power suit equivalents, she had sheer and lace skirts and tops, which added a much needed brushstroke of girlishness to the cascade of jaw-dropping women. The delicate subtlety spoke volumes of the careful craft that went into the clothing, making the contrast with the masculine pinstripes all the more alluring. One striking cocktail outfit paired an entirely white lace dress with a black spring coat, a visually delicious combination. 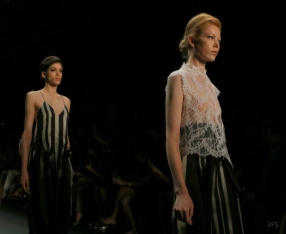 Some of the more casual ‘after hours’ dresses such as a shirt-dress with a wide belt, another wide-belted all white loose fit dress, or a drawstring and rope woven skirt and top, all focused on the belt as a staple of modern womenswear, peeling it from the years when they were utilized most functionally by men.

Interesting, most of these were paired with sneakers. Blurring the feminine line with a girly, tomboyish one, these also resonated as the kind of look working women would opt for when bored of their heels. For we have all seen girls toss their 6 inches for a comfy pair of sneakers! 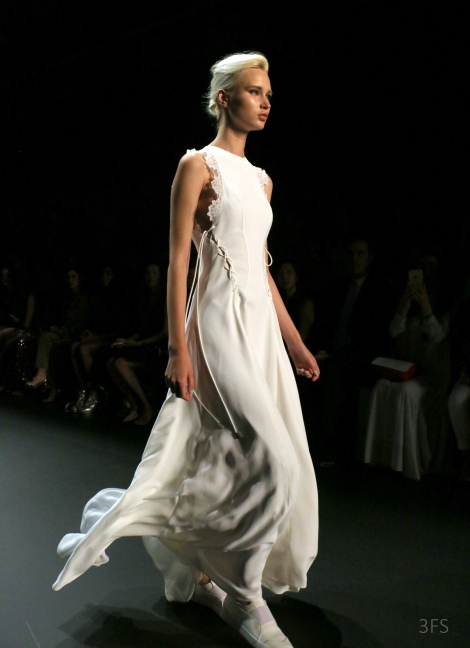 There were several interpretations of stripes, like a casual jumpsuit, a pleated rendition on a skirt which made for an enigmatic entry and swirl, as well as a graphic black and white dress, or a frilled skirt as an ode to modern pinstripes.

The combinations were unlimited, contrasting masculine and feminine, stripes with lace, high sleet skirts with high heels, flat sneakers with ruffled skirts, tailored blazers with nude tops or plunging necklines. With a recurrent love for contrasts, I was thrilled that juxtaposition continued to be such a solid, powerful fashion trend.