Home is where the anchor drops.
For the life of a sailor is never boring,
Not goes out of style.

For there is something enchanting, enigmatic, and virtually alluring about seafaring promises and unprecedented voyages.

Tying this to sailor stripes, a signature pattern for Nautica, is what brings the emotion to life. Featuring an inspiration from the infamous French Riviera is the new collection for SS17 at New York Mens Fashion Week (NYFWM). And like last season, stripes were quintessential.

As an inspiration, the coastline made for a fine backdrop to a very vivid and active presentation, subdivided into areas of active leisure. It showcased the travels of a tailored traveler, who mixed with a haven for artists, writers, and tailored travelers, blending sport and fun in a vibrant venue. Had it not been for the studio light, I would have virtually smelled salty sea air. The vibe from the clothing was impeccable, though, and a harmonious blend of color and laid back leisure. Instead, I caught myself peaking at the lifestyle that the boys exuded, perfectly in sync with the Nautica vibe. And with an unmissable streak of stripes, and a plethora of neckerchiefs! 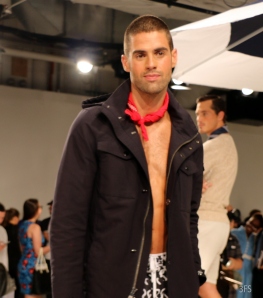 The center stage was a large swimming pool flanked by models doing what they would at a country club of sorts. 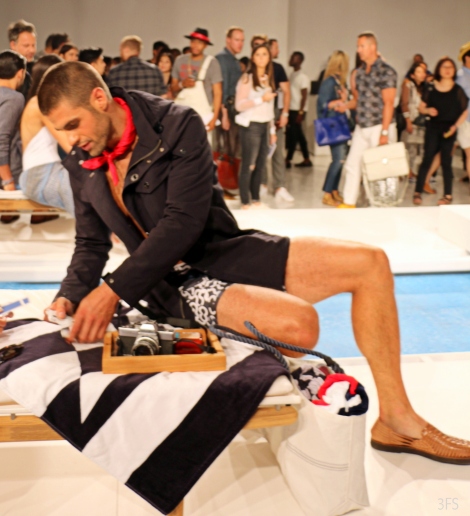 My favorite were the two lounger boys with their swimwear clad damsels. Chad White, a staple at many shows and with his own magazine launch, sported a twill jacket with board shorts, while the charming Adam Caldera of Suit Supply fame had a twisted merino cardigan and tiny nylon board shorts. Both showcased the need for guys to layer up on chilly summer nights. 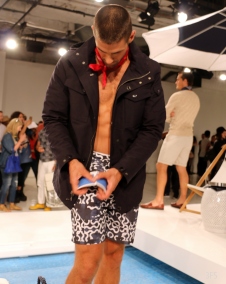 And then there was a bocci court with the boys playing ball and throwing laughs at each other, as if truly in a country club. From cotton and linen blazers in white and indigo to jersey shirts and cotton shirts, all the way to shorts and trousers in various textures like nylon, stretch linen, cotton and sack cloth. As a visible display of mobility, the boys showcased how the looks were versatile for simply posing, lounging, or engaging in physical activity. Pleated pants in particular were making a visible comeback, shunning the boyish days of skinny.

At the back of the swimming pool was a bag of beer, with each of the boys sipping and chatting away above the noise and paparazzi. Accessorized with nautical gear aplenty, they were ready for a regatta! The collaboration here was with Seabags, for one-of-a-kind outerwear crated from vintage sails. 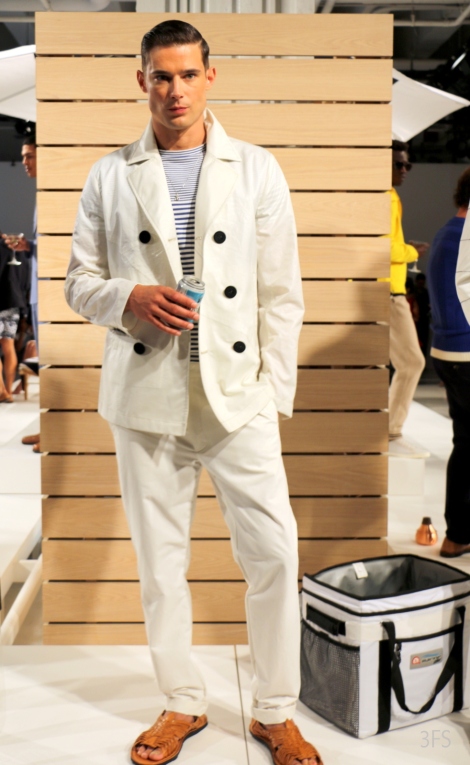 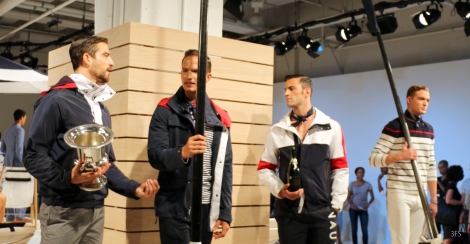 Two sported bright white and blue anoraks in sail cloth, while the others had performance blazers in stretch fabric and interpretations of a blazer and a peacoat. Layered with nautical stripe shirts, plan cotton and silk tanks and tees, the fabrics and colors were meant for relaxation. One of my favorites was a windowpane check pair of shorts in cotton and nylon. Most of the guys however had nylon board shorts and swimwear, clearly ready to strip and jump into the pool at any cue! 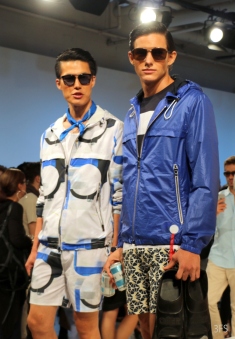 On the other end of the pool was a similar regatta theme, only dressed up a few notches. Courtesy of a nylon outerwear and knit pants or Japanese selvedge jeans, these belonged to the sporty men who sailed in cooler weather (hello San Francisco). Striped henleys, optic print shorts and pop-over jackets and a gloriously striped indigo and white sweater with a red neckerchief sealed the deal.

Last were the unusual suspects, with bright shots of sunshine yellow. The color was seen on other runways too, and was evidently poised to make a splash. Perched under the umbrella were boys in a sting ray yellow stretch barracuda jacket and fine merino polo shirt. Paired with an indigo rayon sweater and twill pants, these were casual but punchy statements that blended finely with the Prosecco and cards that the boys had out. A sand hued twisted yarn sweater was a standout too, if only for its succulent texture. 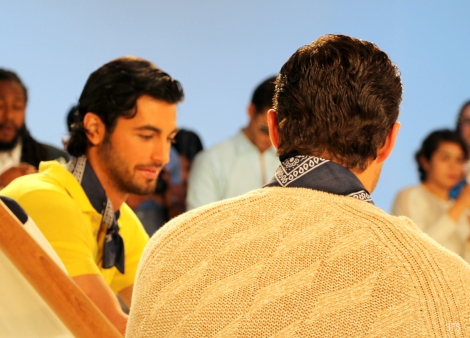 Enjoying the fine merriment was CFDA ambassador Eric Rutherford, teaching me how to smolder in between shows, and doing so impeccably well.

Evoking an emotion and a lifestyle more than clothes pieces alone, Nautica fulfilled the promise of relaying a leisurely, active but laid back lifestyle to its viewers.

Where are we sailing to next?

14 responses to “The Modern Riviera by Nautica at NYFWM”