The world is a book,
And those who do not travel
Read only a page.

Travel is truly a lifestyle, epitomized not just by experiencing it, but understanding its influence. And with a melting pot of cultures and inspirations at New York Fashion Week Mens (NYFWM), it was no surprise that travel became the exact theme of the collection by Palmiers du Mal, a New York based luxury resort wear brand. In their own words, it is a lifestyle of “artists, writers, gypsies and philosophers”, which explains the unique, vibrant and free-spirited nature of their work. Similar to the former season’s Lounge and Villa Life that I witnessed first hand, this collection continued on the theme of laid back but progressive living.

One of my favorite colors, yellow, which was a hit or miss on my complexion, but worked brilliantly in mainstream menswear, was also a star of the show. A yellow mud-cloth asymmetric jacket had my name all over it, with a square cut and bright-as-sunshine look. A similar double tie noragi took to Northern Africa for its style vibe, with ample room for air and well toned pectorals to peak through. 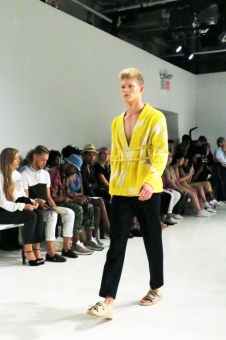 Whites and creams were a mainstay, in all sorts of luscious and gracious hues and fabrics. A Japanese terry henley over a floral printed shirt, or as undertones on several layers of outfits, the color was brought to life in a few of the pieces.

Dark blues and navy hues, seen on several collections, made a comeback, often with the retro tie-dye concept brought to life on loose fitting and breezy fabric. One favorite was the Double tie African mud-cloth noragi, matched with navy trousers. A similar but longer rendition was the indigo mud-cloth neneko, with distinct Moroccan and North African palette and pattern influences. 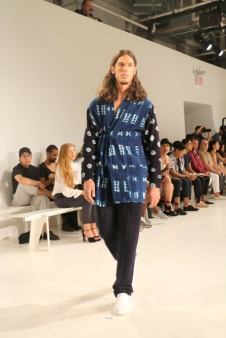 A double stripe noragi on a female model showcased the gender neutral nature of the collection, which was not just in vogue, but made for a versatile collection that could be shared with friends, lovers, siblings and family all at once. 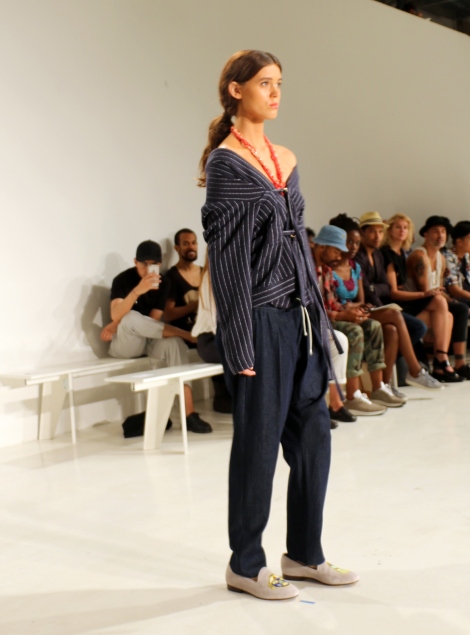 At other times, simpler light blue button downs with navy trousers were a classic, or single pocket tees with pleated trousers, reminding gapers that pleats could be worn effortlessly and easily, too. 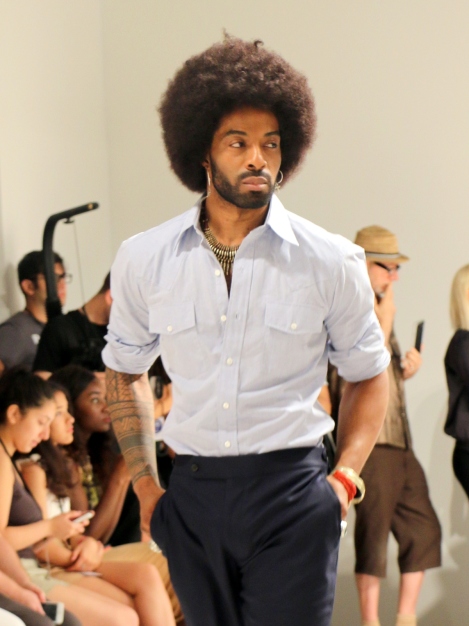 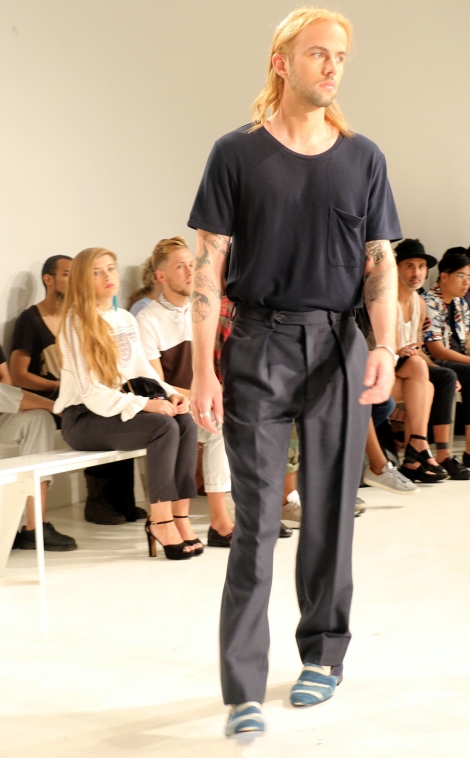 One curly haired model’s navy linen suit made for a standout owing to its sailor style and simplicity. While not as inventive as some of the other pieces, it worked brilliantly with a casual tee and neckerchief. 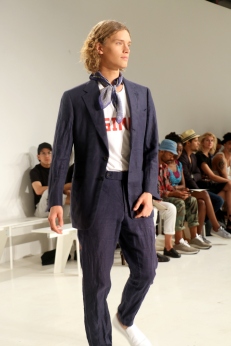 Stripes, a rarity in this season’s fashion weeks, was also prevalent in many styles. Whether it was the Ecru stripe drug rug pullover and trousers in a dashing orange, blue and white combination, or a technicolor hobo coat, the styles were very ethnic. They borrowed from Africa and the Middle East for their shape, and took from the west for pockets and detailing.

I felt like an oversized blazer, complete with lapels and twisted pockets. It was truly a testament to cultural fusion. 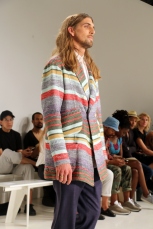 A floral jacket which reminded me of Delhi Fashion Week, as well as a Spanish silk double tie cardigan, were the only floral sequences on outerwear. The former floral upholstery jacket was paired with a Japanese cotton kaftan.

Speaking of which, kaftans made a dynamic comeback, effortlessly flowing into a gender neutral space. An African Indigo and Ecru mud-cloth Kaftan evoked Middle Eastern vibes, with a chest print of tie-dye reminiscent of many adventures. The unmissable portfolio style bag by Moore & Giles X Richard Haines was another stealworthy statement.

The other brilliantly hued kaftan was an orange and indigo combination in mud cloth, which was a true testament to cultural influences, gender fluidity, visually stunning and believably comfortable styles.

A perfect fit for luxe nomads, the collection was unpretentious, a mesh of cultures and rhythms, and undeniably modern.

Travel is truly the most intense mode of learning. And I left the fashion show having a learned a lot. Which in itself, is a testament to the powerful influence of fashion.

25 responses to “Ethnic Shirts and Flowing Kaftans: The Luxe Nomads by Palmiers du Mal at NYFWM”