Who thought my past life of science would collide with my present in fashion so literally?

C2H4 is the molecular formula of ethylene, and the name of the Los Angeles based brand that spoke of its aesthetics focused on re-construction and fine materials, which made its presence felt at New York Fashion Week Mens (NYFWM). Blending street style with a luxury aesthetic, the collection was called “Zero Gravity”, a nod to its astronomical inspiration. The set up and ambiance was to replicate laboratory work-wear for chemists in 2082, conceptualized by designer Yixi Chen.

The pieces were futuristic indeed, a theme tackled by Men on Mars by Nick Graham and and Vivienne Tam’s Outerspace Cowboys, amongst others. Most notable was the collaboration with Italian sports brand Kappa. There were many monochromatic pieces in stone gray, black, indigo and white. The rather bulky and utilitarian outfits were supplemented by piping, accessories or the likes in baby blue, martian orange, bold red and sunny yellow, all hues of the solar system. The all orange outfit being the sun, I presume. 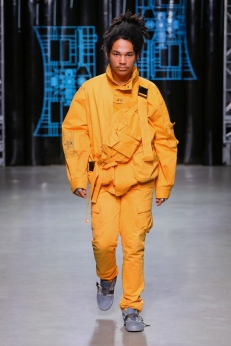 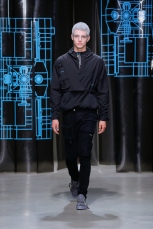 The items were fairly utilitarian, with a departure from jumpsuits with the likes of a plethora of sweatpants and hoodies. There were pockets, belts and straps, all poised to help the profession at hand, and adding a level of exterior dimension that was startlingly functional and alarmingly interesting. 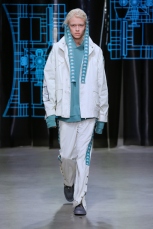 Detailing included the Kappa logo and typographic font detailed imprints on pants and shirts. Bags, pouches and accessories either matched in monotone or contrasted in bold hues. 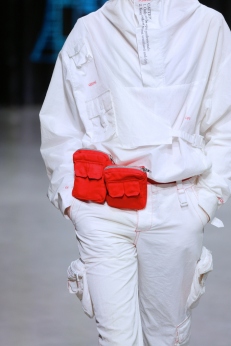 Back to the future already? Because if it looks like this, we are ready for it. 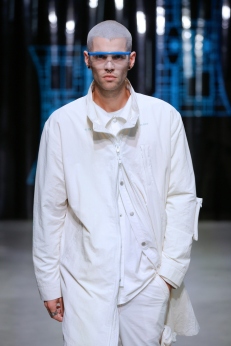 7 responses to “Of Molecular Accuracy: Astronaut and Chemist Gear for C2H4 at NYFWM”