Fashion inspired by architecture is on another dimension.
For it is almost more like construction than design.

Having known Carlos Campos personally and attended his previous shows at New York Fashion Week Mens (NYFWM), as well as interviewed him for a magazine, I have become acquainted with his style, humor and his appetite for food from Honduras! I was thrilled to be invited to his latest runway show. His new collection was inspired by Luis Barragan, a Mexican architect who used color and minimal designs. This formed a backdrop for his earthen toned collection, a color that has grown on me over the years, and one that was prominent in his last collection, with a palette of very few other hues, including bright cobalt blue and my favorite red.

My favorites were his series of jackets and outerwear in sweeping hues of red and blue, varying from blazers to sportswear to rain capes and eternally long trench coats. These were often worn over shorts, making for a juxtaposed mix of street and contemporary, and one that was poised for a hot sell off the runway. 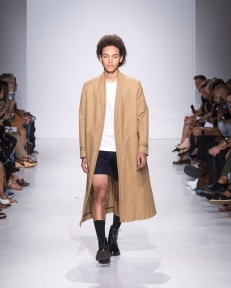 Kimono style white shirts and other square cut shirts were paired with boxy shorts, a look that was effortlessly cool for summer. And the infamous mens romper also made a runway debut, several times in monochrome or color blocking. 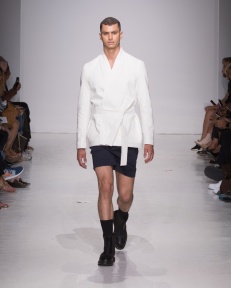 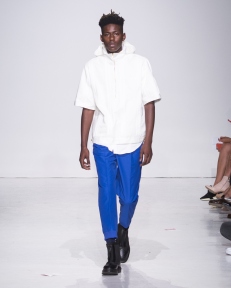 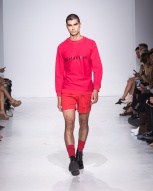 Womenswear was speckled amongst sporty and comfy menswear, with the likes of color blocked dresses and rompers or jumpsuits once again. The lightning print in bold contrasting colors worked as an effortless glam vibe without being over the top. 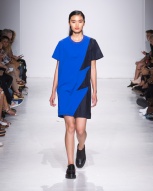 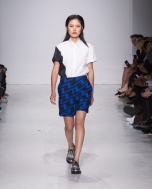 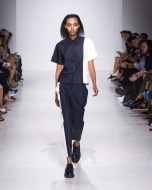 With a respectful nod to the Latin American way of life, this was a tranquil, charming and relaxed show where the calm radiated much after it was over, too. 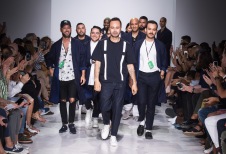 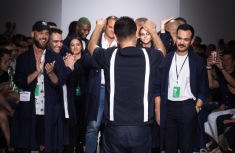 Just so you know, red is my favorite color. @carloscamposdesigner #NYFWM