The kitchen has always been the hearth, the heart, the center of the home.

Truly epitomizing my sentiment towards food, I knew I had picked the right spot of a Michelin Star winner in San Francisco, situated in the luxurious Intercontinental Hotel with sunshine streaming through the massive windows and glinting off of immaculately white tablecloths. Called Luce, it was run by  Chef Daniel Corey, who won the restaurant its retained Michelin Star across the years, and came from the California Culinary Academy in San Francisco, having worked at several Bay Area restaurants. The lunch menu boasted of some stellar choices, even for vegetarians, which has never been a problem in this healthy city. 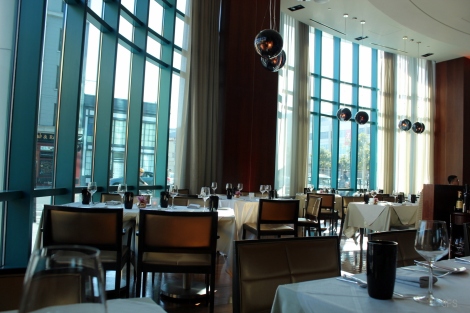 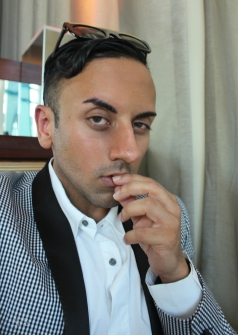 The bouche amuse was an asparagus and pea soup of sorts, topped with herbs and cheese, making for a cleansing, almost healthy juice-like slurp. The elegance of the shrubbery in its vial was alluring, too.

The first course was a veloute of pear, coffee, iced milk, lemon and cacao nibs. The juxtaposition of ingredients lent itself aptly to becoming a modern soup. Velvety in texture and complexly flavored, I tasted the sweetness of the pear and milk which contrasted vivaciously with the sprinkle of coffee and the tang of lemon. While not something one could slurp in buckets like other soups, it was a delicate and intriguing combination of ingredients and tastes that one wouldn’t expect to blend. And plus, it was plated gorgeously with florets elevating the bowl to an artistic level. 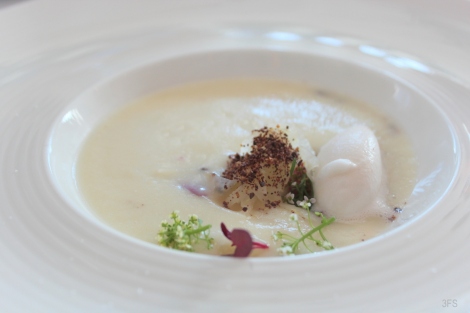 The asparagus dish was one that deserved to be on an art canvas, what with an eclipse black plate on which the ingredients literally shined. Green asparagus was prevalent, both roasted and raw, relaying a salty and smoky flavor all at once. It was garnished with fresh garlic, baby leeks, drizzled with parmesan cheese and with green almonds. The fibrous overhaul was offset with the saltiness of the delicate cheese fluff, with the rawness of the green almonds providing a textural contrast. Most certainly one of the prettiest and most sumptuous salad variations I had tasted. 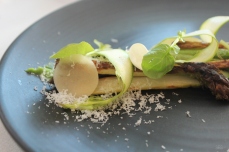 With a penchant for doubling or even tripling desserts, being a dessert monster, I opted for two desserts and skipped the second entree all together! 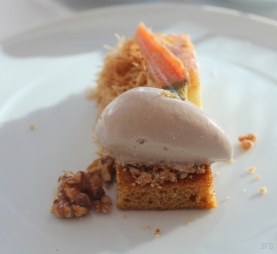 It first started off with one of my favorite cakes in a gastronomical deconstructed format: the carrot cake. It was a cream cheese cheesecake with carrot caramel, ginger cake and served with a candied baby carrot, pineapple sorbet and candied walnuts with a dollop of fried phyllo dough for crunch.. A refined level of decadence graced the three dimensional plating, which was worthy of a runway debut, particularly with the carrot caramel artistically dripping off the cheesecake. The sweetness of the cheesecake married the spicy twang of the ginger cake, which was brought together sumptuously with the citrusy pineapple sorbet. Truly a mouthful of memories that I found never forget. 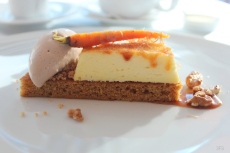 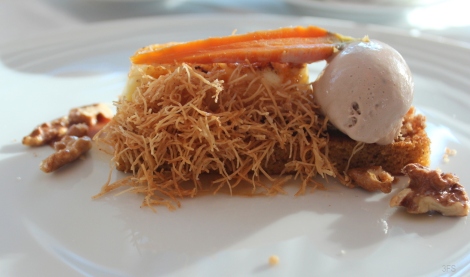 Up next was something that went down the chocolate lane for memories sake; a chocolate cake layered geometrically into a rectangle, with a peanut butter mousse, topped with  passionfruit sorbet and an artistic slab of tempered chocolate. The contrast of crunchy with soft and ganache-like decadent chocolate was alluring, and rich beyond all riches, which is why the passionfruit debut as a palette cleanser was so welcoming. All in all, a decisively tasty mouthful of art on a plate. 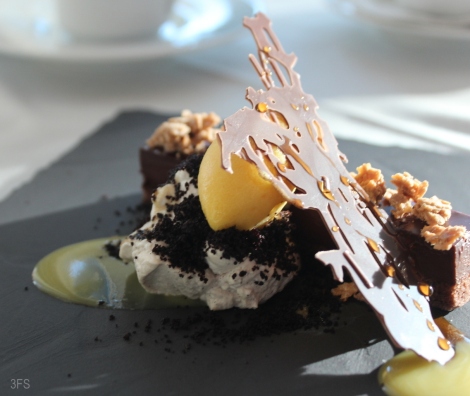 And thus ended a sparklingly sunlit meal in a Michelin Star of one of my favorite culinary cities, San Francisco. Not before I gobbled up a grape macaroon and made my way to the quirks of this charming California town. 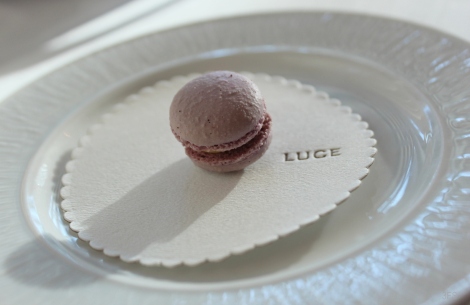