Who would have thought Southern food could be light?

With a reputation for everything starting off in a pan of butter, my semi health conscious self was teetering on a double-digit stretch of cheat days, assuming that my indulgence would pay off when my travel was over. However, to my surprise, the birthplace of country music offered me a meal that was as light and airy as the pleasant vibes of its hospitality. Proving naysayers wrong once again, who warned me when I bustled into the jolly city of Nashville. I adore legends and histories, and being a travel addict, I believe that the quest of exploration is a gratifying gift to the mind.

It started with exploring the Honky Tonks and the nightlife of this curious Southern town. Dressed in signature leopard print and cowboy hats, we sipped and trotted till my comrade and I felt the need to satiate our palettes. And found ourselves away from the fried goodness of Merchants all the way in an independently constructed restaurant, quite the antithesis of what cosmopolitans would give you. 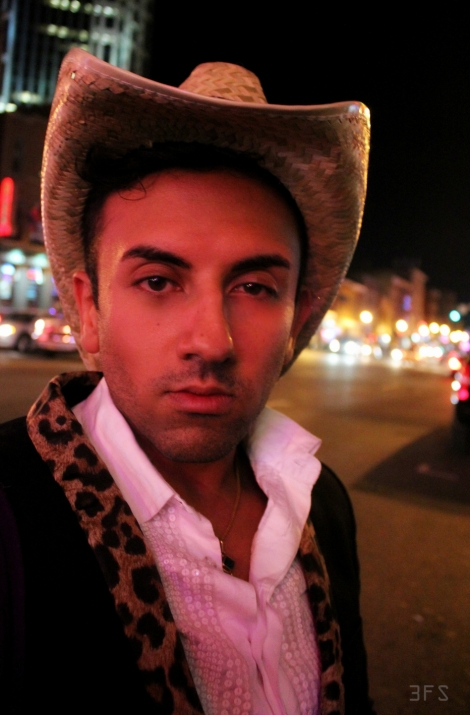 Flyte was in the upcoming neighborhood (how many times have we heard this Brooklyn-aise phrase before?) of The Gulch, with a red-hued comfortable vibe. Casual but sexy, the fact that everything was dipped in my favorite color red was an enchanting preface for any meal. Chef Chistopher Stallard promised sourced, local ingredients transformed into inventive dishes, and while known for meaty game foods like rabbit pies and pig ears, he promised to concoct a vegetarian meal for yours truly. His pedigree included working in top spots across Charleston, Knoxville, several Wine and Food Festivals and even the Michelin Stars of Chicago. 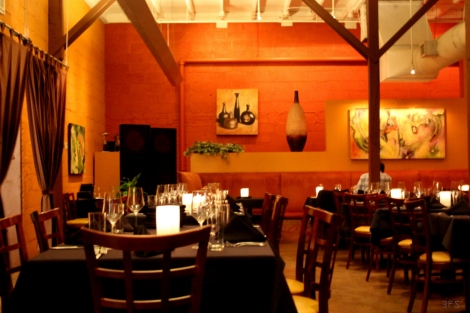 What jumped out at me was the inclusion of Tokaj wine on the menu, a beloved Hungarian dessert wine that was such a rare find across the Atlantic. Thanks to wine director and co-owner Scott Sears and assistant Scott Collins, I was able to sip on this indulgence as an accompaniment to my entire meal! With kissably sugary lips as a consequence, it made my palette ready for the vegetables, desserts, and a delightfully sweet conversation (pun intended).

With a penchant for beet salads off late, having had my favorite one at home and in Vegas, I received a unique spin on it. The beets were placed atop a herb broth, with slices of granny smith green apples and creme fraiche. The most surprising ingredient of all was a bitter vegetable ash – literally the remnants of charred vegetable remains. Explaining it as a flavor enhancer, I took a bite, expecting a bitter monotone. Instead, I was greeted with a relatively sweet beet, having soaked in some creme fraiche, and a kale-juice taste from the herbs, offset by the tart freshness of the apple slice. The bitter flavor truly did enhance the depth of flavor, giving the beets more body and transforming the two fluids into a sauce of sorts. Truly an inventive use of all ingredients in a simple dish. 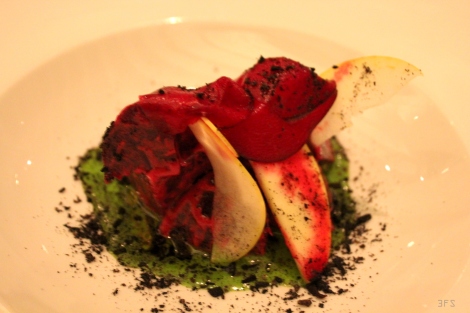 Going healthier in the main course, the chef prepared a warm pasta salad dish. The wide noodle style pasta only borrowed its shape from Asia, but was an entirely Italian inspired Southern take. Complete with cucumbers sliced latitudinally to mimic the ribbon-like flow of the pasta, it made for a whimical bite, for I wouldn’t know which one would be crunchy and which one chewy. Accompanied by fresh tomatoes and cooked kale, it was a well dressed, colorful plate. While under-dressed on seasoning, I almost wished I could have that vegetable ash to sprinkle on it for an additional note of bitter and spicy flavor, at the expense of clean and colorful beauty, though. 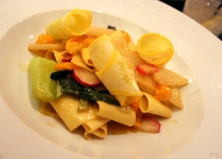 Given the Southern hearty hospitality, I was a waterfall of salivation while waiting for dessert. I opted for a warm pumpkin spiced cake with a cinnamon sugar balanced precariously on top of it, surrounded by pumpkin meringue and a homemade pumpkin seed brittle. With just the right amount of non-sweetness, this was a succulent, warm and inviting dish that left my tongue lusting for more. The spicy cake blended in contrast with the crumbling cookie, cooled down by the meringue, with a slightly sugary but crackling brittle. The stark contrasts of textures could not have been more outstanding. 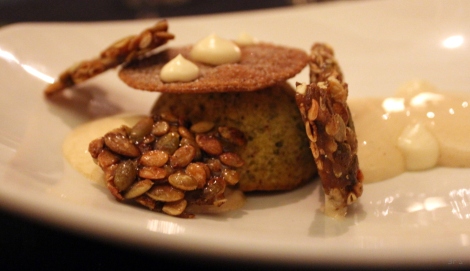 And thus ended a late night in the heart of country music. After a relatively lighter rendition of a meal, we continued our prance into the glitz, lively lights of Nashville. A city with which I made a promise to return.

7 responses to “Light Bites and Sweet Nights in Nashville”