It is not in doing what you like, but in liking what you do that is the secret of happiness.

Eight sins into a dessert party chez Dominique Ansel, I knew that what I was doing was giving me supreme happiness. Inhaling a galaxy of dessert dusted with more sugar than Pixie Dust, the Four Seasons was transformed into an oasis akin to Neverland. Complete with golden eyes, gilded florals and magic birds in obscure corners for salacious decor. 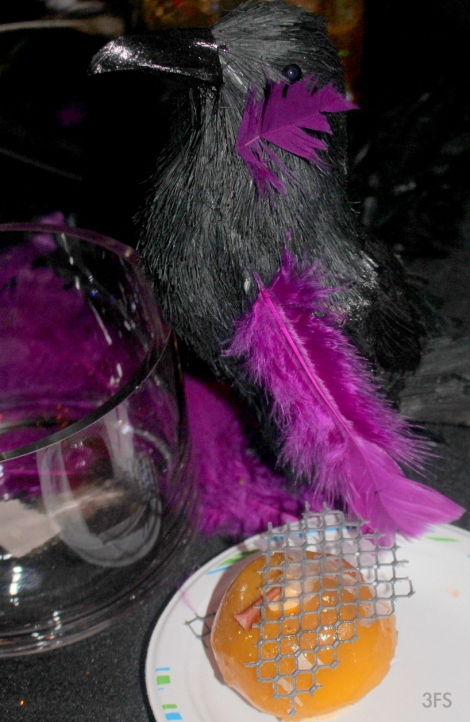 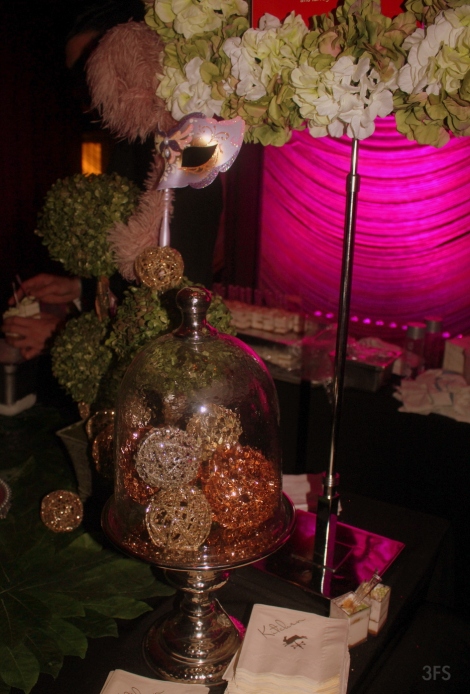 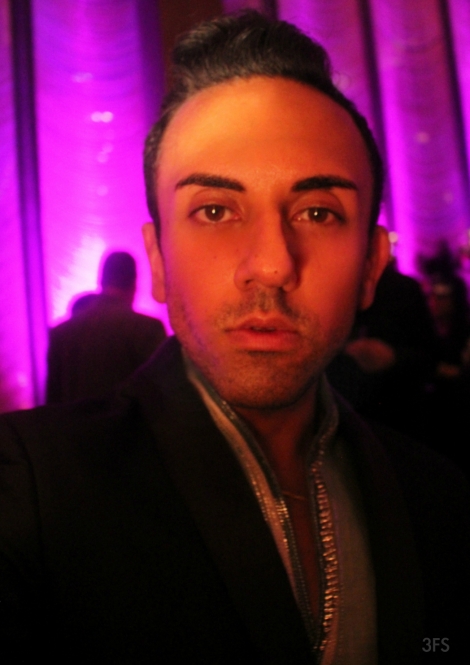 Only, being a masquerade, things eventually got liquid, bringing me to the latter seven of my 15 sins. Observed by the many eyes behind veils, behind vines and florals, that stared as gushing witnesses. 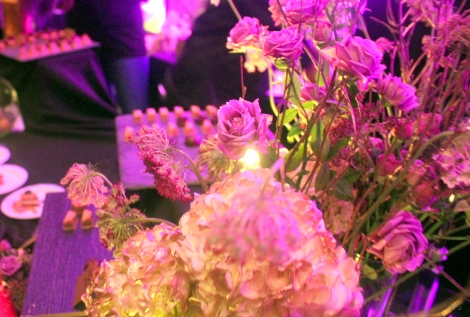 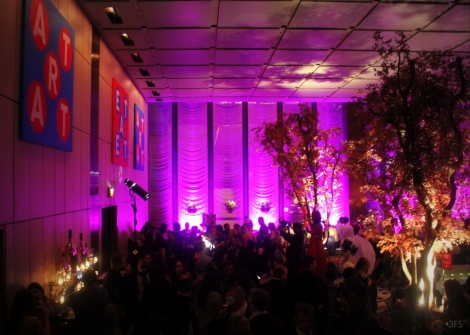 Come fall, when the weather starts cooling down, the warmth of baked fall fruits are as comfortable as the reddening foliage that eats up the countryside. Joe Murphy of Jean Georges Michelin title served a warm and whole poached Bartlett pear, breaded in nuts, stuffed with rose mascarpone cream and served with a warm passion fruit caramel. Not only was this one of the most beautiful plates, what with the voluptuous curves of a pear reminding many of damsels in finery, it was also one of the most inventive fruit and caramel combinations I had seen. The comforting sweetness of the soft pear blended with the aromatic rosiness of the cream, which needed a passion fruit to cut it gently via a stick caramel. In lusting for this dessert, I felt I had finally dethroned the touted candy apple! 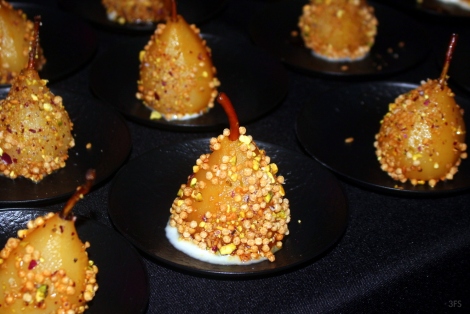 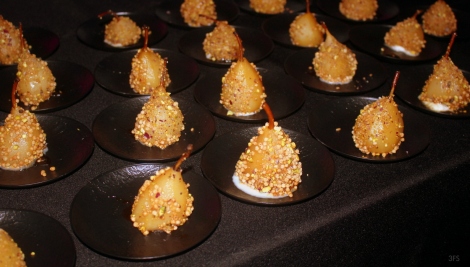 Sam Mason of Oddfellow’s ice cream debuted with a pecan pie ice cream topped with a rather wrathful looking ruby red cherry foam, sitting on a  graham cracker pecan brittle base. While not incredibly inventive, it was generously portioned and in luscious nightlife hues, too. The ice cream was velvety and creamy with an alluring tanginess from the lipstick hued foam which made for a complete tasting experience. 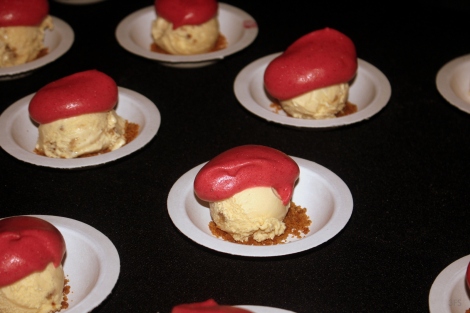 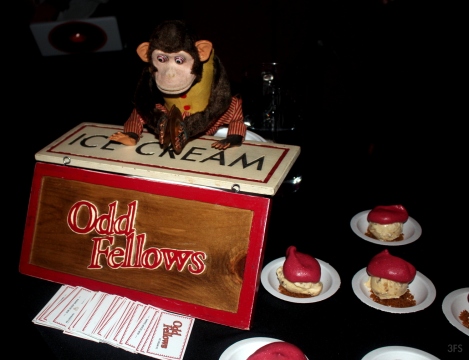 With several gluttonous chocolate indulgences, many were clamoring for palette cleansers. Kierin Baldwin of Locanda Verde had an obvious such departure with a lemon olive oil torta with Sicilian oregano with ricotta cream, pistachio, a lemon semifreddo and a candied lemon slice. Possibly the dessert equivalent to lemonade, this one acted like a proud de-greasing agent for the palette. Having loved a recent outpost of olive oil cake, the spongy and light pairing with sour citrus was ethereal. 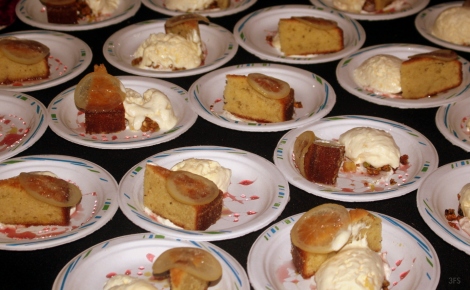 Another frozen feast for the face was Richard Capizzi‘s Tirala Su from Lincoln Ristorante, which he charmingly described as a white espresso gelato coated in a Magic Shell chocolate, with mascarpone crema and drunken ladies (a trickily phrased rendition of the brittle rendition of oats, brown sugar, salt and flour). While not groundbreaking, this one was decadent owing to its cute story and childhood memory of playing for hours with magic shell chocolate. 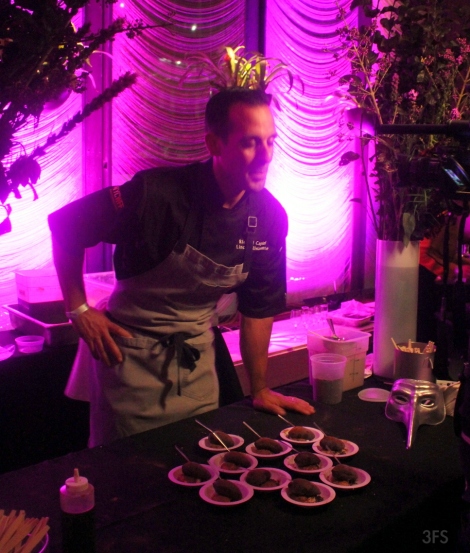 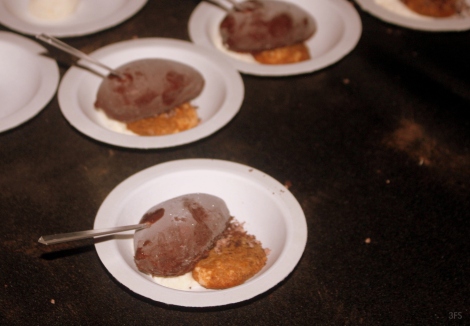 On a quest for quenching thirst with salivating lemon and citrus desserts, a break from the sugars and chocolates of the evening, Ron Paprocki of Gotham Bar and Grill had a seriously lust-worthy debut. The Michelin restaurant gave onlookers a vanilla semifreddo was topped with coconut jelly, mango passion fruit sorbet and citrus foam. Yellow like the sunshine after a dark day, it had the harmonious blend of citrus in cold and light textures, with the sorbet offsetting the tangy foam brilliantly. 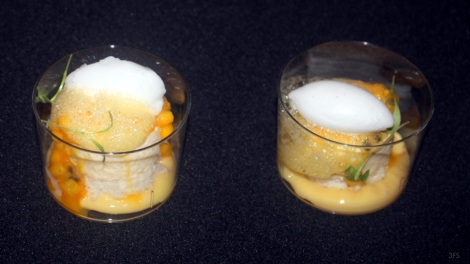 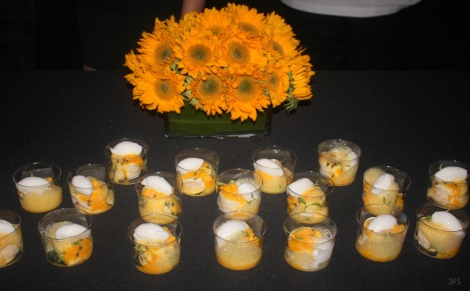 Whoever came up with the idea of yet another inventive take on milk, this time in a bourbon cocktail, didn’t know they would be serving it to the living legend of Peter Pan himself! I heart milk, a staple sleepytime drink that has been lulling me into lullaby mode since childhood. And with a newfound discovery of Four Roses Bourbon, loved before, was ecstatic about the union of childhood with fantasy. With Yellow Label Bourbon, milk, simple syrup, vanilla extract and grated nutmeg, it was a snooze-inducing beverage that I wouldn’t have minded nibbling on cookies with. Thankfully, I had a plethora of desserts. 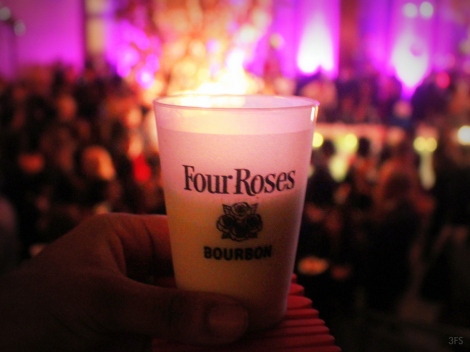 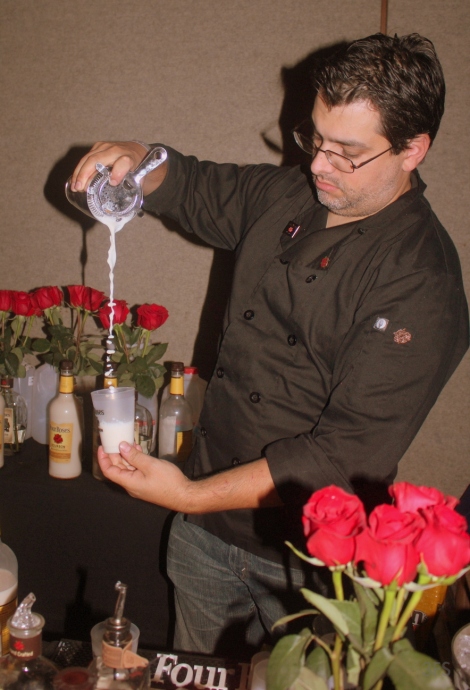 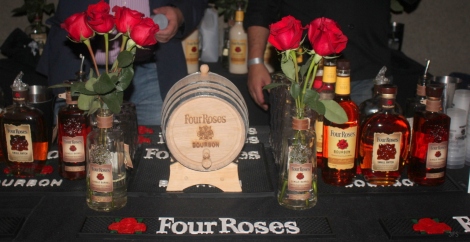 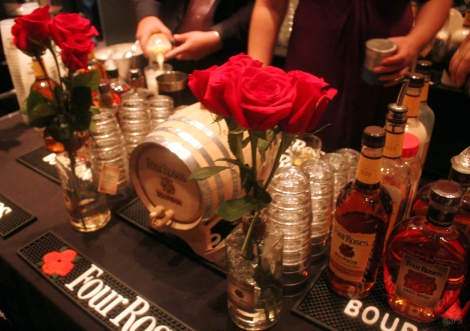 The supporting pomegranate and Elijah Craig Bourbon and grape cocktail was a strong, sweet and decadent punch to the brain. With a known pomegranate obsession for textures and tastes, the mix with dangerous Lunazul Blanco Tequila was elevated to dizzying heights with pomegranate liqueur and a dash of rosemary. Both made for sweet but powerfully strong cocktails that would give any leg workout a literal run for their ability to enable stumbling. 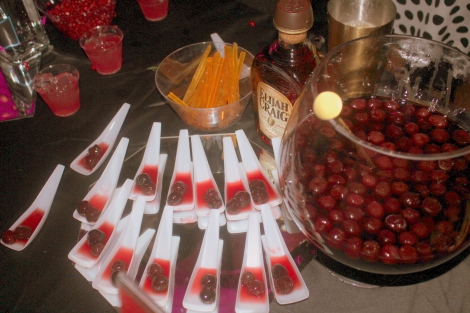 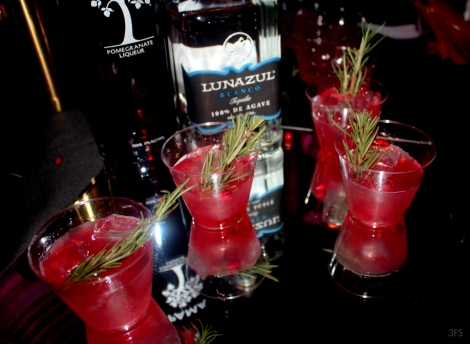 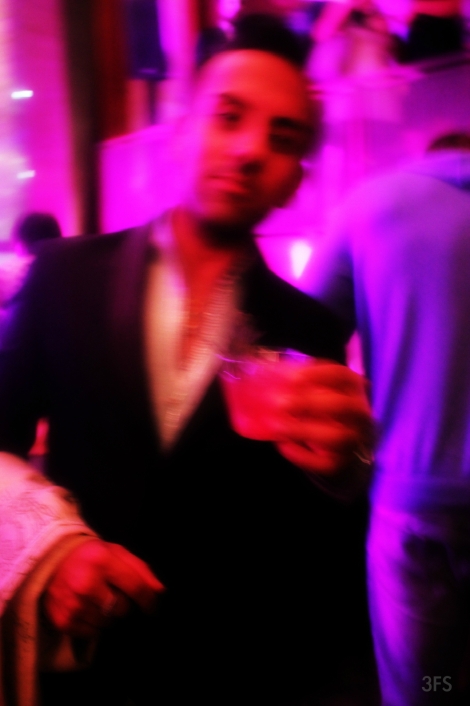 And as we tumbled out into the darkness, Pan’s words came to mind.
Never say goodbye,
Because goodbye means going away,
And going away means forgetting. 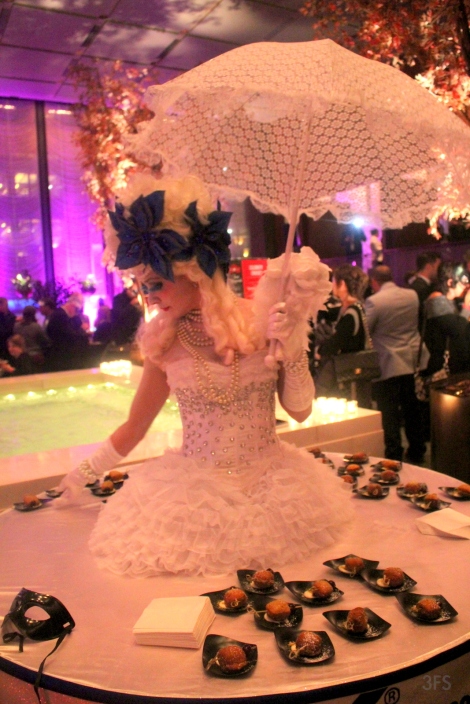 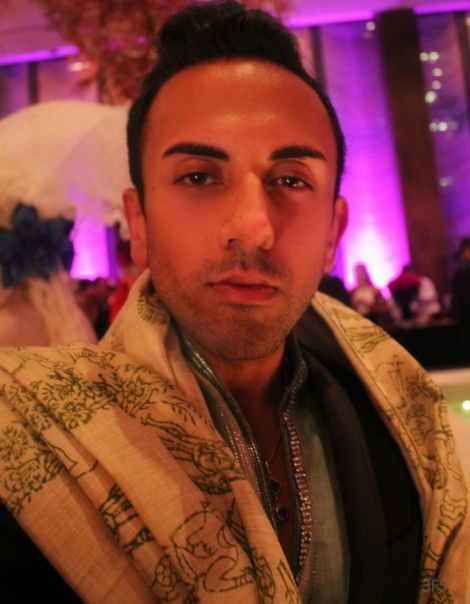 get roots before you grow fruits ~ @gothammag
malice in wonderland 🫖
you’ll never get back the life you waste trying to be normal 💭 ~ @thrive
Lunar New Year 🧧 Restoring energy in my favorite Chinese city, #Hangzhou, where I:
love is a three way street 📐 VDay @southamptonartscenter #TheHamptons
... so blunt you can smoke my truths
does passion come from pressure or pressure come from passion? ~ @yahoonews
... next time a stranger talks to you, look up and gently whisper: “you can see me?” 👻
paradigmatic for eudaimonia [εὐδαιμονία] ~ @dailyfrontrow
...many have an image, but few get the picture 🪞📱
meet me en route down the rabbit hole with alice 🪑🖼🥀
if you make decisions based on other people’s opinions, then you make really boring choices 🥂