If there are two things that turn me on, they are the joy of seeing glitter from dusk to dawn, and the delight of finding some star of smartness in the confetti. I’m talking of New York’s fashionable nightlife scene, where dinner often spills into wee hours of the morning, or starts after a night which is blinded by neon. After which, the leather hand rails and flickering votives beckon you into a recurring familiar spot for late night dining, coincidental dating, and, to everyone’s surprise, culinary artistry.

The Stanton Social is not new to the Lower East Side, a scruffy part of the glitzy city with scruffier residents, but popular with newer transplants and A-listers. However, it knows how to draw the crowds, thanks to the sharp wit of Chris Santos. Having had the coincidence and pleasure of meeting up with him at Food Network events, I have noticed his eye for swallowing up fads and trends and transforming them into tapas style bites. Which he proceeds to switch up every so often, serve up in the dim of chandeliers and leather, and proceed to stay open much later than his food contemporaries. This gives New York much more than fast food for a late night snack. As a consequence, the creative types – from photographers to foodies to models to cast members of every show on the wire – all flock to The Stanton Social to either people watch, or to be watched.

Split into two levels, the first floor dark wood and chocolate hued couches with glass lamps are a juxtaposition to the second floor. Which is where the red couches remind me of a Miami sibling, and could take your neighborhood locals seeking hole-in-the-walls bickering about pretentiousness. But all of that vanishes when the culinary scion dishes out his wildly creative plates, catering to both DSLR holding foodies and Tiffany ringed Cartier hugging fashionistas. 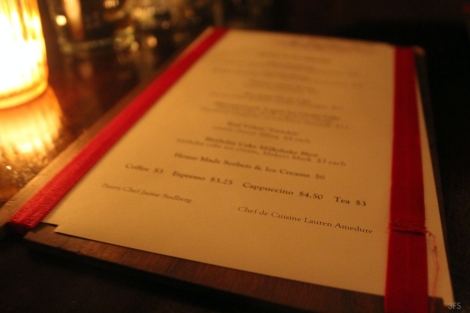 Given the Food Network association, desserts were inevitable. But the buildup towards desserts at dawn was surprisingly lengthy, too, with time frolicking by in a vibrant ambiance. I started with a vodka basil martini, which came with more than handful of crushed basil leaves and a lemon. Smelling unmistakably of pizza, it was a fun, tangy drink that paid homage to a nightlife staple snack, sans the greasy fat. Plus, it utilized scent to its advantage, one of the most underused senses in culinary.

My comrade got the mango sage and vodka cocktail, where we could smell the mango from merely inches away. The Indian Ocean scent married with the strength of sage, and combined with a heavy dose of vodka, made for a tasty, and surprisingly filling drink. These came with wok charred edamame, which probably would have paired well with sugary cocktails owing to the coat of sodium, but was nonetheless a fun way to begin the night when most mortals tucked themselves into bed.

The basil saga continued in puree format, topped on a ravioli. Colorfully composed, it had squash blossoms and beurre blanc to cut the heaviness of the ricotta cheese filling. Making for a filling bite, it was a fun use of squash as a leaner, filling alternative to potato. So good, that we got them twice! 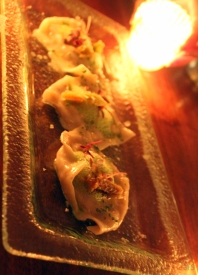 My favorite savory bite of the late night was the heap of potato and goat cheese perogies. Almost like an Indian snack, they were rich, filling and oozing with salty goat cheese. When eaten with caramelized onions, they acquired a sweet and sour undertaste, which was cut with the fresh, light and bitter truffle creme fraiche. I could have ogled and gobbled four of these had we not had an assembly line of plates to follow.

My meat eating counterparts savored one of Santos’ wildest creations: the French onion soup dumplings. Spelled out like an oxymoron, this was a modern take on the Shanghai specialty, where caramelized onions in meaty broth were caked in dumpling wrappers and placed into individual compartments, covered in rich and stringy Gruyere cheese and baked to perfection.

I was less enthused about the salad covered flatbread which was a deja vu concept from many other nightcaps in rival towns. But I did enjoy the pickled vegetable of the day; citrus ginger glazed carrots topped with celery were a fresh, tangy and healthy nibble that had enough crunch to transform me into a rabbit. Considering the late time of night, it would have been fitting to be seated with an Alice, too.

As the night went from glittering to dark to seductive red, I scooped up another round of cocktails, getting the Grey Goose citron and muddled strawberry drink, freshened and de-sweetened by fresh lemon and lemon syrup. Tasting like an adult strawberry lemonade, the fruit bits in the strong drink acted as a palette cleanser. For an inevitable dessert tasting was to follow.

The quintessential “Twinkie” made its debut in two forms, both sceney enough to be devoured. I preferred the red velvet Twinkie, for the cake was moist, and the cream cheese filling was sumptuous. Despite a suggestive squeeze of white fluid at the edge of the longitudinal dessert, it was a terrific bite sized dessert. There was also the key lime rendition, with meringue and graham cracker crumbs, but something about the green sliver was neither lemony, nor pistachio, but all alien to me. 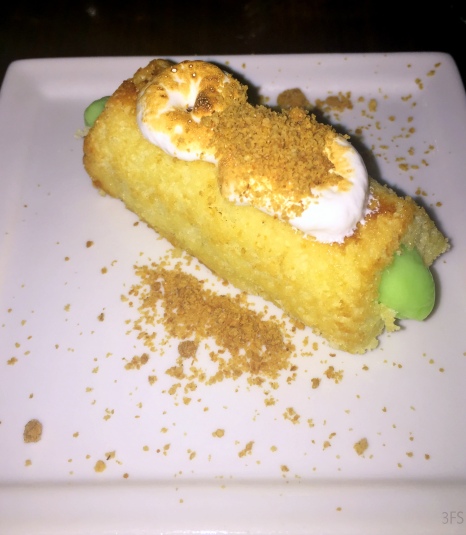 As a tribute to the Italian staple was a rainbow cookie cake, with almond cake, apricot jam and cannoli ice cream, all atop an artsy swoosh of dark chocolate. The dark chocolate disk atop the neon nightlife green, red and yellow layers of cake was the highlight, and while the cake tasted of soft, unsweetened almond, it left the teeth an inexplicable green. The thankfully un-saccharine taste was made up for with the vanilla in the cannoli ice cream and inventively curled touille.

The famed warm doughnuts made a debut on our table, complete with three dipping sauces: chocolate, berry and caramel. Reminiscent of a recent nightlife outpost in LA, they were thankfully warm, and coated in granular brown sugar that mandated a lickworthy fiesta. While not the most inventive of plates, the dipping and dunking made for a playful nocturnal activity. 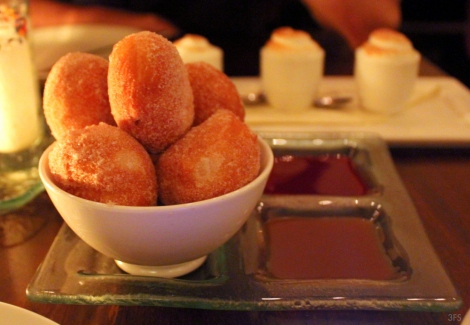 As a lover of chocolate, I found myself inching towards yet another rendition of s’mores. The s’mores panna cotta was a sweet marshmallow fluff covered in a solid chocolate ganache layer, doused with graham crumbs. With inverse proportions to a graham-held-marshmallow, the indulgence of the ganache made up for the slightly over-the-top sweetness.

The other s’mores inspired dessert was similar, with a chocolate creme brulee topped with a marshmallow meringue. Tiny and bite-sized, it was a rich, stick an decadent morsel that fit the theme of a rich, indulgent night.

We ended with a mandatory celebratory birthday cake milkshake shot. Served tall in a shot glass, it was a mix of birthday cake ice cream and Makers Mark, with a birthday confetti rim. Packing a solid punch of whiskey with a sweet ending, it was just what the night owls craved when the sun began to lick the sky for a lazy sunrise. 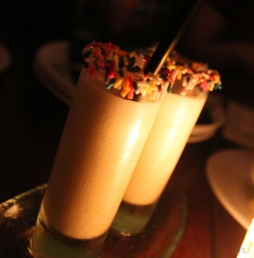 Finally, a staple for my gourmet taste buds after a night of mischief.