We eat with our eyes, and then with our mouths. So whatever can satiate the pupils will inevitably (and hopefully) seduce the tongue, too. Touché.

With a repeatedly successful culinary experience in Nashville, I opted for Etch, a modern and imaginative restaurant with creative, global inspired cuisine by Chef Deb Paquette and desserts by Pastry Chef Megan Williams. Paquette has one several awards and returned from abroad to open Etch in 2012. The ambiance was modern and glinting in red and glowing vibes, matching my retro outfit for the Southern evening. 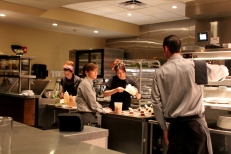 I started with a duo of cocktails of polarizing worlds, courtesy of the charming bartenders. I started with a nod to my favorite Alice in Wonderland with ‘The Walrus and he Carpenter’: Barr Hill gin, apple cider tonic and lime. Promised to be clean and flavorful, it was exactly how I expected: strong, and built for a stroll on the beach. The second one was more up my alley, ironically called ‘Hindu Mister’ with Templeton rye, tamarind and fenugreek bitters which gave the drink a unique sweet and bitter undertone that I had never tasted before, alongside Cocchi vermouth. It was a boozy Indian style drink that whisked me back to Punjab with every sip! Accompanied by bread and homemade butter, naturally. 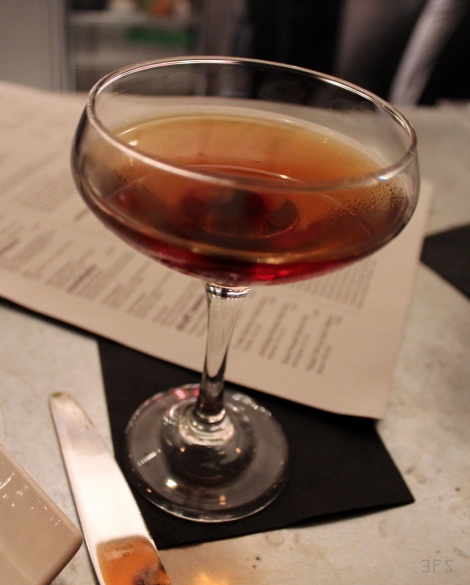 The appetizer styled entree was a classic roasted cauliflower with truffled pea pesto, salted almonds and feta crema. Aromatic and perfectly charred, it was the longitudinal presentation with a swirl of the pesto and dollop of the feta like a peace sign that was satiating. I am a fan of sauces and their presentations, and this was just the opening to an artistic series of plates. The tastes were impeccably perfect: crunchy and steaming cauliflower with a flavorful pesto, balanced with the salty cheese. 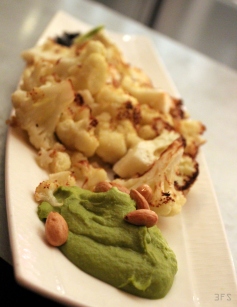 The entree comprised of a Middle Eastern sounding katafi savory pastry which came as a crown on a plate, surrounded by polka dotted sauces in two hues, looking much like a fantasy of The Little Mermaid. It was a spaghetti squash and sage, fontina cheese, golden raisins, poblano gravy, charred eggplant puree and black olive barley tapenade. With an array of ingredients and textures, it was a party in my mouth. The crunchy katafi was offset by the greens, with the salty olive sauce contrasting with the smoky eggplant one, making for a sumptuous slurp when scooped at once. The spice factor came with the few dots of poblano, while the barley added a nutty bite that was distinct from the spaghetti crackle, making this a meal for all senses… particularly auditory! 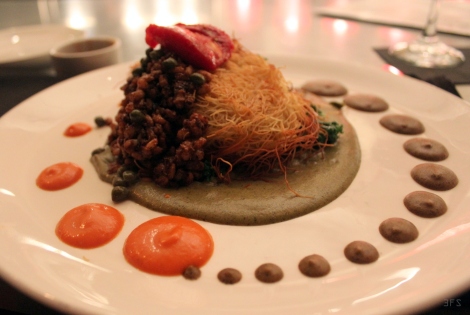 The dessert comprised of a bottle of 5 Puttonyos Tokaj wine, an homage to my favorite wine from my favorite European city, Budapest, with impeccably golden grape tastes.

The dessert itself was a peach upside down cake, a cheeky nod to the pineapple and the combination of both in dating terminology. With a centerpiece of a cake, it was accompanied with a spicy candied ginger crumble, smoked peach puree, candied pecans, rye whiskey ice cream and raspberry coulis, it was once again an artist’s portrayal of food on a longitudinal plating canvas. With a swirl of the peach puree, there were polka dotted dollops of deep red coulis, and a sensual temperature play with a warm cake and frozen ice cream. The tastes worked well together: a citrus and fruity cake with a spicy crumble, a sweet raspberry variant and a bitter undertone to a well churned ice cream. A refreshing take on deconstructing a classic and marrying it with unexpected flavors and feels.

With a reaffirmation of the Southern culinary craft, I waltzed off into the city’s pulsating nightlife, at least by cowboy musical standards!