I am a fan of whimsy.
Actually I AM whimsy.

With a penchant for outrageous attires and phone cases in particular, Jeremy Scott‘s spunky line Moschino takes credit for my many selfies with my quirky cases. Namely a Moschino bear, and a Windex bottle knockoff of the Moschino Fresh scent. How’s that replica of myself on my coffee latte, by the way? 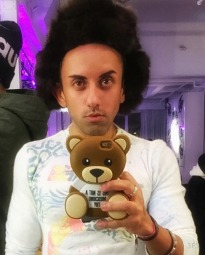 As an ode to Jeremy Scott’s show at New York Fashion Week (NYFW), I sported my Moschino shirt with Tom Ford pants, and last minute changed into Puma gold for kicks. Literally for the Lookbook.

The show was a love letter to The Old pre-Giuliani sketchy New York, when Times Square was X-rated theaters, the west side was a market of sex clubs, and crime rates were high in a slimy city. Known for his over-the-top metaphors and visuals, I found it easy to break the show up into four stellar trends.

As an ode to the slime city, a retro style green slime motif was actually quite pleasing on the beautiful models. On sweaters, crop tops, dresses, the true homage was to Nickelodeon’s Slime Time Live. I like green as a hue for style, often underrated with the pinks of the season. 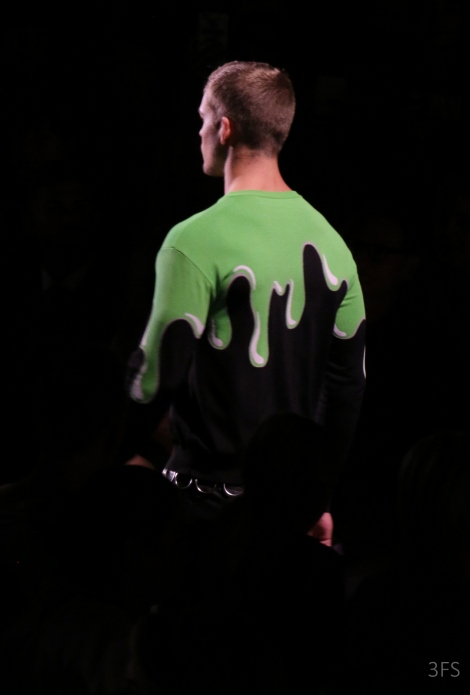 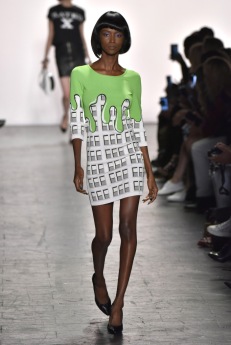 The fishnet stockings and knits were a clear pop inspiration to the sleazy 80s of New York. With legs aplenty as motifs on dresses, and even a single leg on a svelte man’s shirt was a clear conversation starter. Overblown faces of women with red lipstick and a checkered veil added to the drama, charisma, and mystique… especially when on sweatshirts, shirt dresses, and between the pleats of a short skirt. The less subtle knits designed to be X-rated, often inscribed with the words too, were very clear with their suggestiveness. One particular men’s shirt with the burlesque face paired with hot pink pants with metal hoops was my favorite. The checkered theme was elaborated further by cat-eye sunglasses in a asymmetric graphic checkered pattern by Alain Mikli, screaming oh so retro. 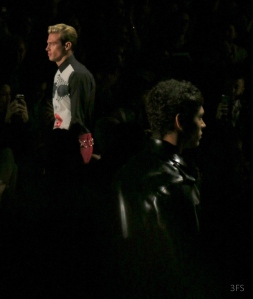 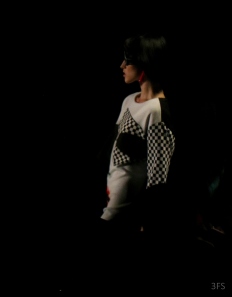 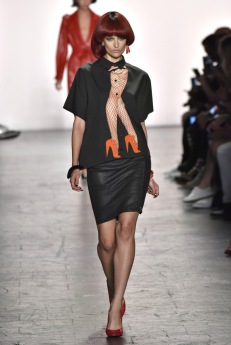 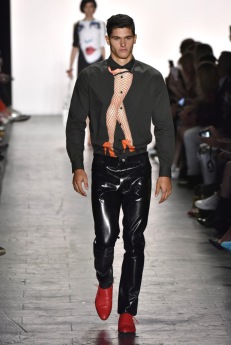 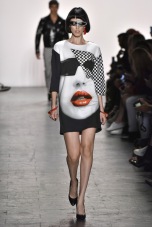 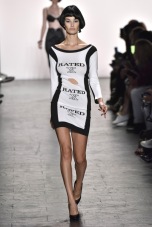 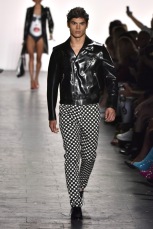 The hot pinks and sequins and graphic prints continued with faces on men’s pants, women’s dresses, shirt-dresses and even more. With graphic tees and dresses reading “Hot Hot Hot” in large letters, often paired with leather pants, these were the hottest of haute couture. The red and black patent leather trench coats were worn with nothing underneath, giving an illusion that you could be wearing nothing and thus ready for the immediate sex craving. Some of the trigonometric shaped accessories were fun too, as well as the solid printed dresses and shirts, and definitely more wearable and sellable in the Milanese stores than the all sequin propped dresses in quirky 3D shapes. 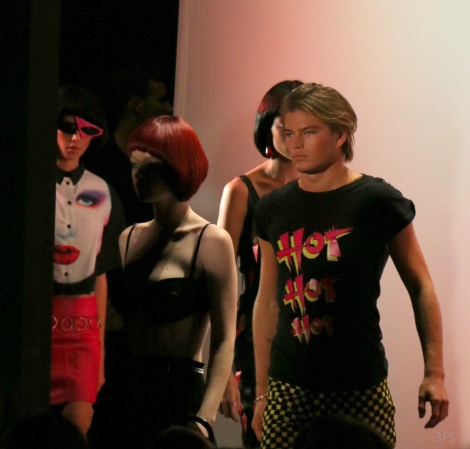 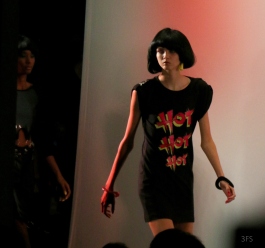 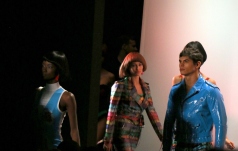 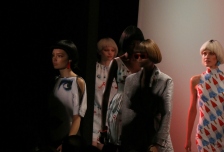 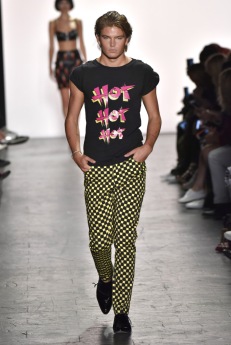 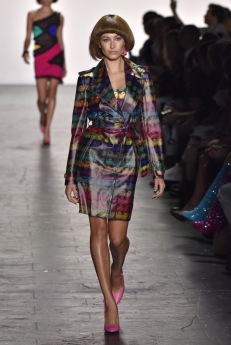 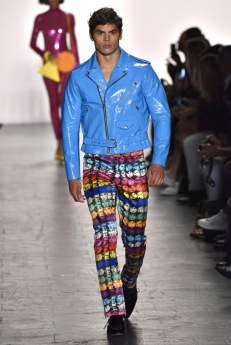 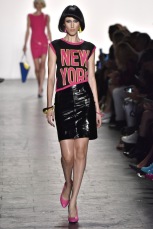 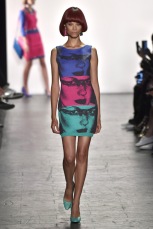 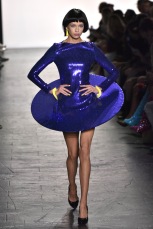 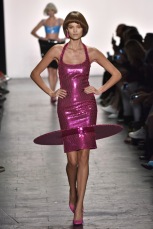 Move over clean fresh, Jeremy Scott’s newest gimmick borrows from the oral care industry (another touche, considering the use of lips and teeth in sex). Very Moschino, Colgate was an inspiration for several sweaters, hoodies, bags and more, one hoodie inscribed with “Jeremy Fights Decay!” Clearly a target for direct-to-customer, this was yet another fun play on turning every day items into haute fashion. 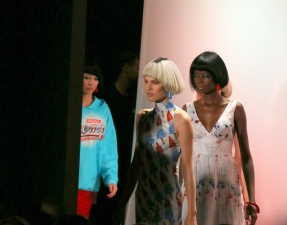 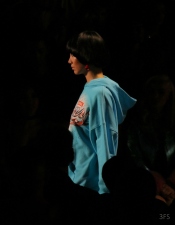 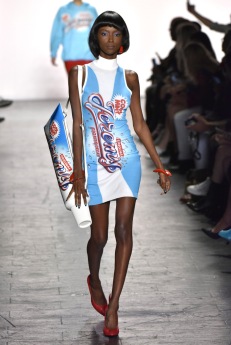 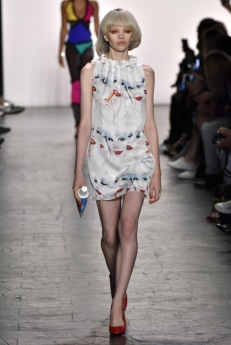 Having splashed in a fresh bucket of whimsy, it was fun to see several enthusiasts and editors lurking around the stage after the show, some wondering about Sakara Beauty Elixir giveaways, obviously pondering why a safe sex toy was not part of the paraphernalia! Or at least dental floss. Others however, were just too stunned in whimsy! 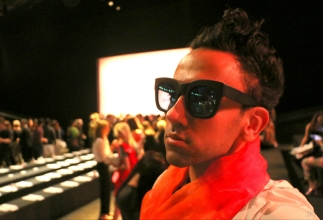 For after all, whimsy never goes out of style. Sometimes, it IS style.

11 responses to “What Ties Slime, Neon, Burlesque and Toothpaste Together? Jeremy Scott’s Whimsy at NYFW”