Lazy leisure is truly an inspiring way of life.
And one that I succumb to ever so often. 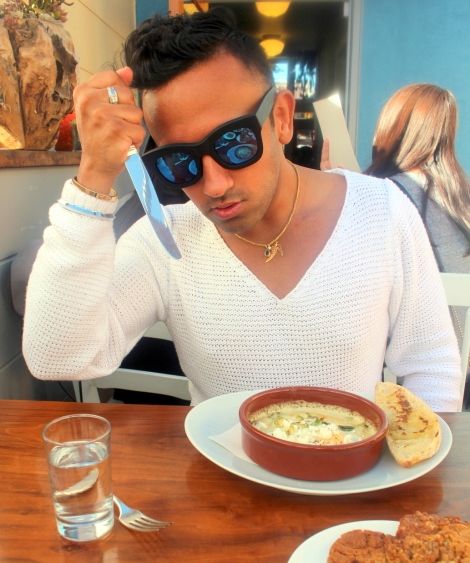 So when Gastronomypix lured me into an off the beaten path hood called Outer Richmond in San Francisco after one of our glamorous editorials, I found the vibe to be homely, quaint, and rather old fashionably Californian. We stepped into Marla Bakery, which was actually an acronym of the family members who started the place. With an obvious commitment to homely recipes, the freshness of the ingredients and baking lingered in the air in a heavenly scent. We moved towards the back into a small open space, almost like a patio of grandma’s house, for what was to be a hearty afternoon brunch in a laid back and relaxed setting. 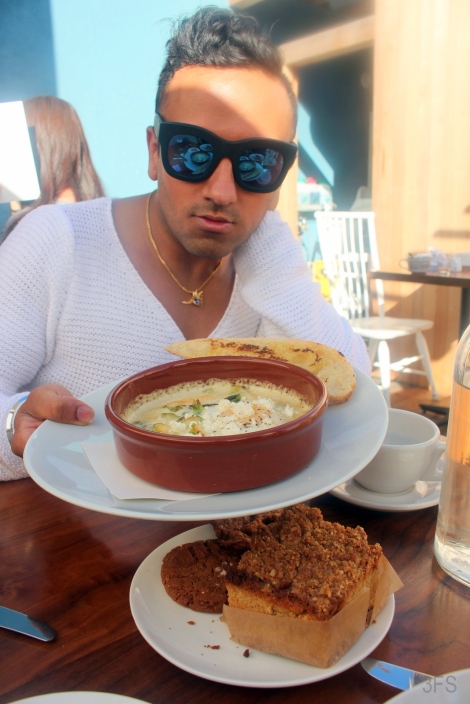 We kept it simple, owing to the tranquil nature of the air and my general aura of calm that often enveloped me in California’s calmer of two cities. I started and ended with just one dish (pre dessert of course), which was a heap of brussel sprouts in a buttery cauliflower broth. It came with a side of homemade toasted bread, and was topped with a baked farm fresh egg and a dollop of goat cheese, one of my favorite kinds. 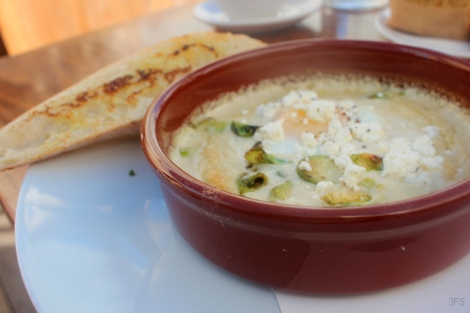 To say that it was aromatic would be an understatement – the scent of warm hearty vegetables and butter literally left me in a trance, and matched the lazy ambiance perfectly. While on the broth-y side, it was a rich and decadent bite, with scorching hot broth marrying beautifully with well crusted toast. 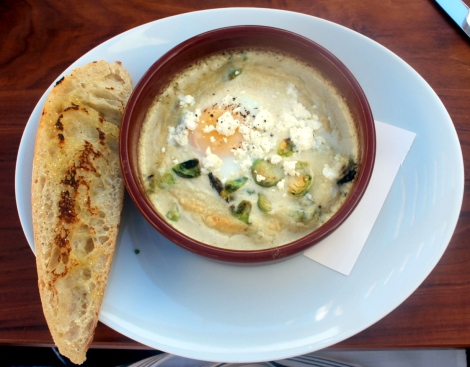 She ordered an architecturally plated vertically tall poached eggs with muffins that came with an assortment of what looked like potatoes and sweet potatoes. It was both intriguing and succulent to photograph, evidently. 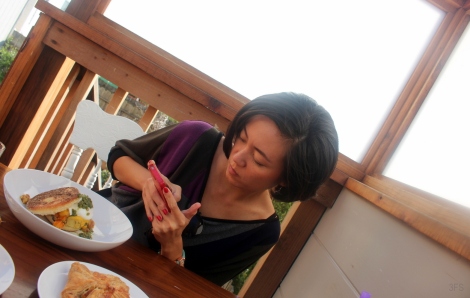 Being a bakery, I could not part without nibbling away on some of their sweeter offerings, which thankfully were not laced with fondant or frosting, but were exposed in their naked and true, homemade attires. We ordered a cardamom coffee cake and salty oatmeal cookie. Being a cookie monster, the very mention of a soft baked cookie with intriguing flavors is enough to seduce me. The saltiness and crunchy oat-iness was a merry blend, and was thankfully not at all saccharine, which often dampens my penchant for dessert. The coffee crumb cake had an undertone of spice to it which reminded me of Indian barfi. It was a rigid and shockingly un-crumbly texture, with bitter notes of coffee coming through nicely amidst granules of brown sugar and cinnamon spice. Something that would blend perfectly with Indian chai or a shot of whisky. 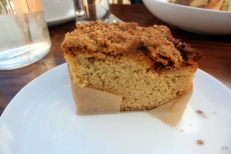 After a content afternoon in a lazy and homely environment, we tranced off into the bay, to where our next culinary adventure awaited us.

13 responses to “Lazy Afternoons are made for Indulgent Brunching”