Akin to the faux but enlightening Chef Gusto of Ratatouille de Paris, anyone can cook, but only very few can invent.

And so continued my legacy of exploring Michelin Stars tucked into the worlds favorite of culinary cities. This one happened to be one I had frequented aplenty, and one that was at the pinnacle of my edible delights, San Francisco. This time, Gastronomypix and I opted for Benu, heralded by Chef Corey Lee of the French Laundry, with feathers like a James Beard Award. His restaurant received 3 Michelin Stars and a AAA Five Diamond Award. With my own vegetarian menu at bay in the bay, I was thrilled beyond expectation at the tasting menu.

The bouche amuse was a corn and chili fritter, almost like a pirate‘s meal, but crunchy and spicy atop an Oriental wooden stand. It married well with the lusciously soft wheat bread and delectable honey butter, in a hive shape. 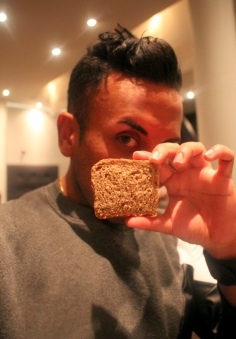 3 dishes exhibited their divine devotion for pine nuts. The grape and sour pine sauce one was most inventive, as was the savory pine nut cheesecake of sorts, with radishes. The herbacious one with farrow and mushroom played better with texture, each making the nut a star of the plate.

The pink and green salad challenged the beauty of salads that I had inhaled in San Francisco too, amongst other cities. With watery and juicy celery offset with the salty peanut shavings, it was the lily bulbs and horseradish that lent this dish the most flavor.

One of my favorite vegetables and a superfood in itself, this dish comprised of brussel sprouts with chanterelle mushrooms drenched in chili olive oil, with sunflower and pumpkin puree. A perfect contrast of creamy and fibrous, bitter and sweet, this was a dish I could gobble by the bucket! 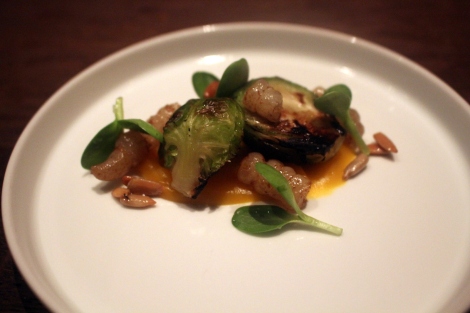 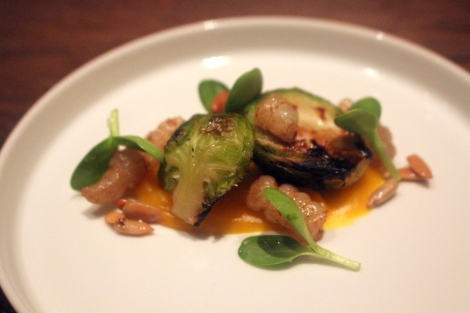 This was the name I nicknamed to the carrots preserved in sake with daikon, wasabi and a ginger hash. The sake flavor was prominent, soaked up by the spongy carrot texture, which married well with the spicy add-ons, almost making it like an Asian version of an edible margarita with a spice rim!

Rather inventively shaped like a fish, or some would say a sperm if they had ordered the wine pairing, this broccoli tempura was crispy without feeling greasy, and laden with fresh horseradish and cheese snow. Clearly the vegetable favorite of the restaurant, it both appealed to the eyes as well as the imagination. 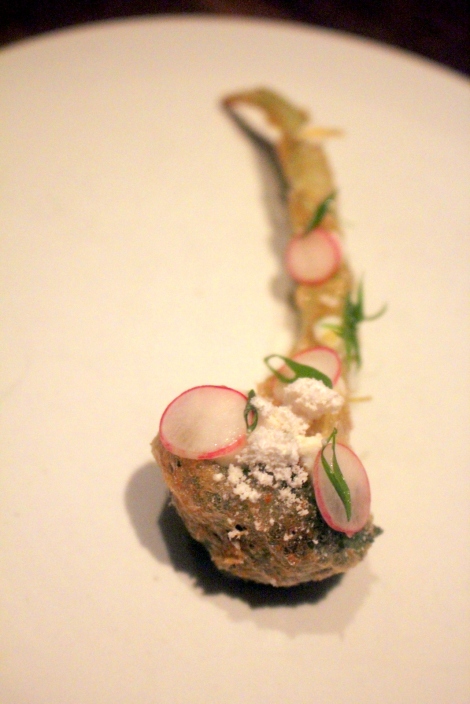 Brimming with aroma and steam, the wild bamboo fungi, eggplant and gai choy broth was what my noodle and chopstick dreams were made of. The delicate flavors of the vegetables melted into each other and enriched the broth, as I slurped through the decadent texture of their fibers. 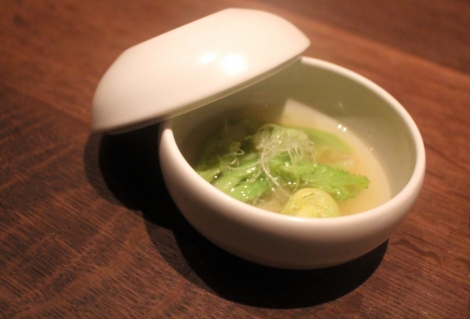 Truly a feast for those in love with grill marks, the giant king trumpet mushroom was grilled to perfection (reminding me of a certain eggplant dish), and shaped like a fish. It was accompanied by a sweet and spicy miniature salad of cool cucumber, crunchy sesame and spicy charred scallion. Collectively, it was a fine blend of textures and compelling flavors. 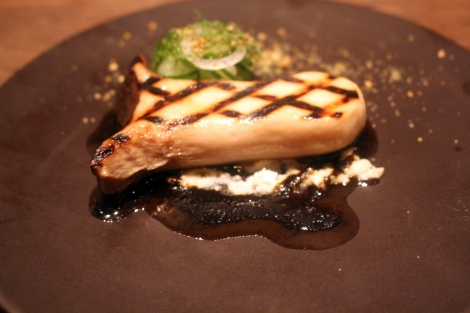 I wished to call this deconstructed, for the sweet, hearty and delicately tangy flavors reminded me of old fashioned potato salad, albeit given a gourmet treatment. Sweet potato, chard and chestnut lent their heartiness to tangerine peel fritters which cut the fat to provide a palette cleansing feel. 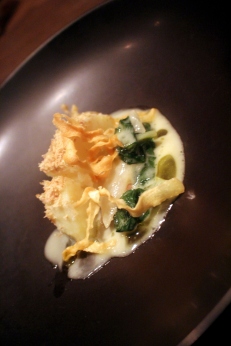 Having learned about sunchokes from a former tasting menu, I was well aware of their part potato part mushroom texture. Paired with jujube, burdock and oyster leaf, they acted as a sound and hearty pedestal for other flavors and chewy textures.

The vegetable bouillon soup came with a presentation and performance of its own. Nestled with vegetables, aromatic roots and herbs, the pouring of the actual broth conjured many scents to life. It ate heartily too, culminating an enchanting meal.  Not before a plum infused drink to cleanse the palette! 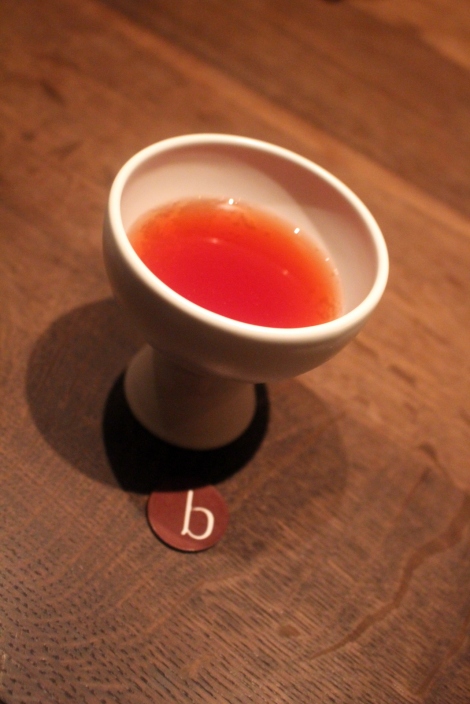 The green apple sorbet with yuzu was a tangy, and almost spicy palette cleanser that was a refreshing jolt that woke up all the senses. The sweetness of the yuzu was a delicate touch on the tartness of the apple, preparing the salivating mouth for the finale.

The meal ended with what looked like dessert with wings! Fresh and dried yuba was in an almost ice cream texture, with an almond crumble and white chocolate. While not usually a fan of the latter, its sweetness melted well with the crispy and wooden textures of the yuba. 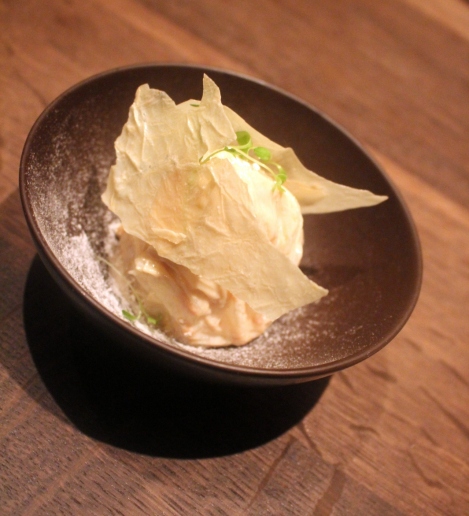 Ending the meal with sesame and chocolate fritters alongside sesame almond biscuit bites, I found that for once I had been more satiated with the savory rather than the sweet elements of the tasting menu. 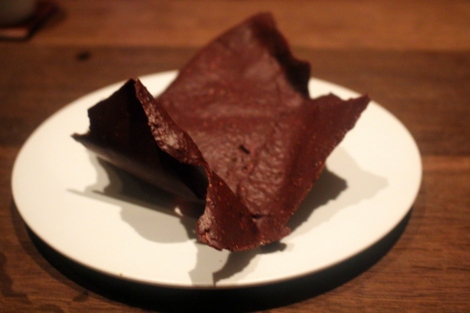 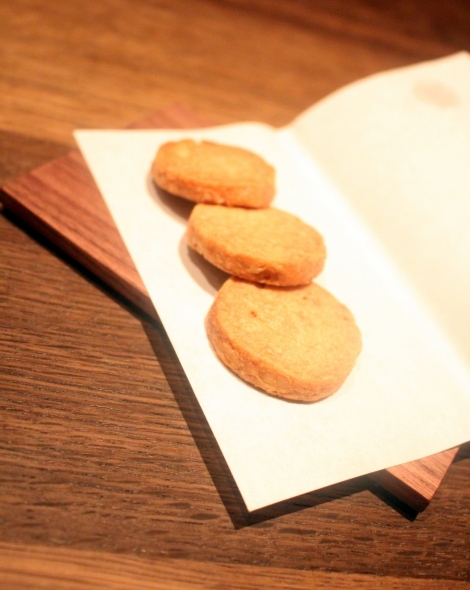 Not just to pinch myself out of the dream, but to ensure I didn’t board a subsequent flight, I retreated back to what the Bay Area had to offer by nightfall.