Many wonder why I like desserts, despite not liking things that are saccharine sweet. Perhaps its a habit, or a luscious urge for things to end on a satisfying note. Which is why, inevitably, I’ve been through phases when I double or triple up on desserts, almost entirely skipping the pre-required meal staples. Who follows rules anyway?

Having dined before at their sister property Prospect, Boulevard was a natural next choice for a lazy weekday meal in a heralded culinary city, San Francisco. I had formidable expectations of the American style regional flavor restaurant inspired by French cuisines. Headed by Chef Nancy Oaks, the accolades included Zagat’s San Francisco Bay Area’s Most Popular Restaurant, the James Beard Foundation Award for Best Chef in California 2001 and the Filiale des Etats-Unis in France.

With a dark ambiance lit with the glow of metallic silverware, dark oak tables and vibrant, fiery bar, it was an immediately comforting spot with a view of the popular Ferry building, and if one craned their neck with a cocktail in hand, the San Francisco bridge. Clearly a neighborhood of my choice, having spotted the bridge while dining lusciously before at The Slanted Door and Coqueta.

I started with a classic Moscow Mule: Earl Grey infused Svedka vodka, lemon juice, honey, Bundaberg ginger beer. Served in a classic copper cup which matched the gold dipped ambiance, it was a refreshing, if not standard bite, with just a hint of the earl grey sweetness floating in. My standard hot water side however came in a celebratory kettle which reminded me of another distant childhood memory. 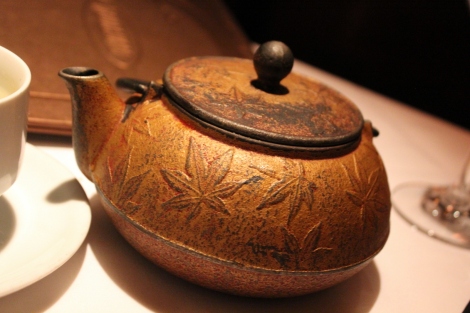 I much preferred my hearty meal which came on an elongated plate. It was a mixed vegetable plate, likely created to fit my vegetarian perspectives. The most obvious compartment was the Zuckerman Farm asparagus, Meyer lemon and aoli. Tender and well cooked, these were a fresh and tangy bite, making way for the crispy soft and sweet potatoes, plum tomato raisins, currants and pine nuts. Collectively, these worked in texture and balanced the starch with sweetness, in an almost Middle Eastern combination. The molten english pea ravioli with toasted pine nuts and goats milk cheese was the most flavorfully advanced, with fresh peas juxtaposed gracefully with a salty cheese whip of sorts. 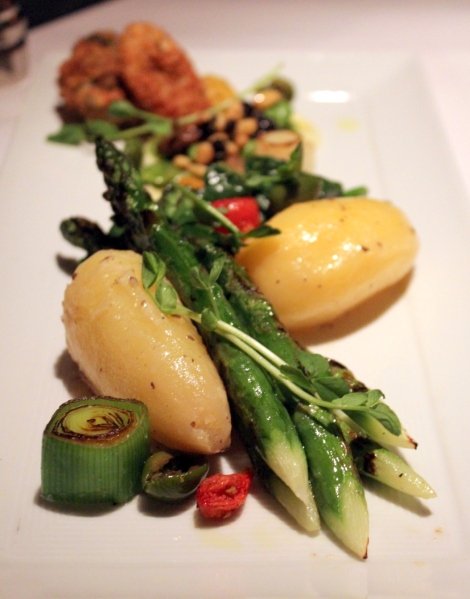 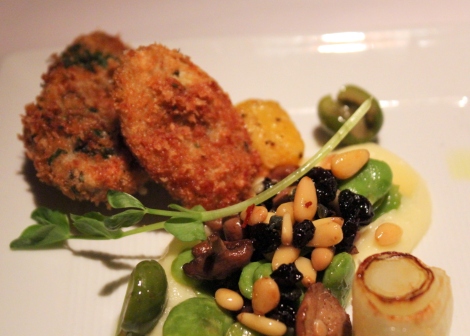 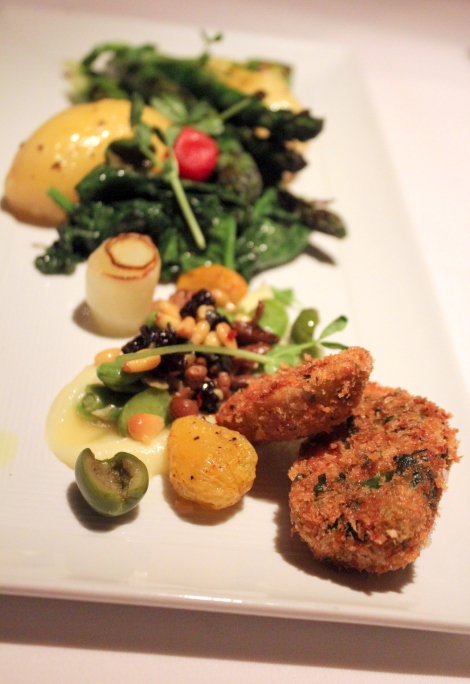 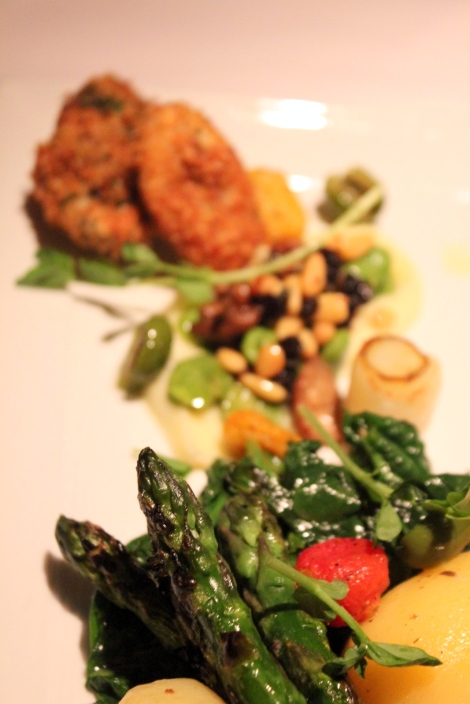 Having had a past reputation of multiple desserts, I had decided to gift myself two from the extensive menu which I could not wrap my mind around. I started with the alpine and seascape strawberries, vanilla bean mousse, olive oil cake, strawberry vanilla sorbet swirl and lemon caramel. Despite being a mouthful of ingredients, it was literally art on a plate, with rosy fresh strawberries blending with the sorbet, and two dollops of perfectly shaped mousse and medallions of olive oil cake. The flavors worked fantastically together: tart strawberries with fruity bursts of flavor, with the creamy vanilla and spongy olive oil cake, all cooled with the sorbet. Texturally, tastefully and compositionally, a winner.

Next up was the richer of the duo of desserts, with a butterscotch pudding, dark chocolate Bavarian cream, pecan shortbread and wild pecan granola. Like architecture on a plate, this one was vertically constructed with the pudding cylinder at the base, dark chocolate meringue kisses and sprinkles of cereal-like granola. I instinctively dismantled the construction with the slightly crunchy pecan shortbread first, before taking mouthfuls of every ingredient in every bite. Texturally and tastefully, the blend of butterscotch, chocolate and the crunch of granola was a winning combination, which almost mandated me to get a glass of bourbon to wash it down! 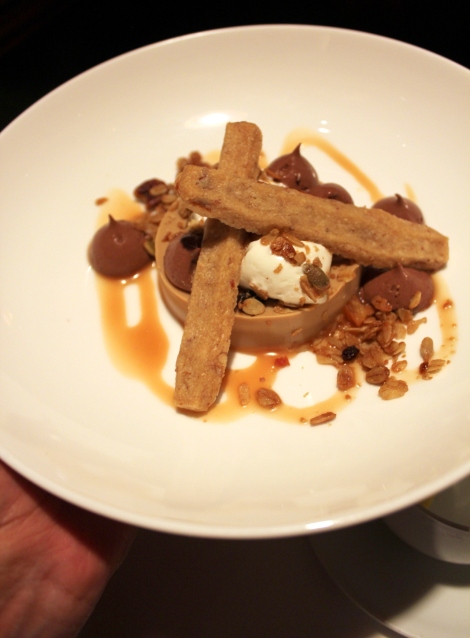 I was thankful for not having followed the rules again. For doubling up on dessert was a masterstroke. For next time, I would consider double the double. Truly.

8 responses to “Doubling Up on Architecturally Composed Desserts”