Mixology is the equivalent of my modern day elixir.

For nothing excites me more than a spot that can create an alluring juxtaposition of flavors so diabolical that it knocks the remaining senses out of my mind. And to think that a luxury, Michelin Star chain, no less, did the trick in the culinary gem of San Francisco.

Hakkasan was founded in London in 2001, homage to my British half roots, and has become a nightlife pinnacle on the planet with many locations worldwide. Delivering gourmet Cantonese and Chinese food by Chef Ho Chee Boon, the combination of fresh ingredients and original creations was a festive delight to the tastebuds. While deep rooted foodies may argue that this was a more nightlife catered outpost, I found the meal and the drinks in particular to be very enticing. Having gobbled many San Francisco local haunts, this perch in the One Kearny building overlooked the financial district, with natural light under hand blown chandeliers and a gold lit bar. 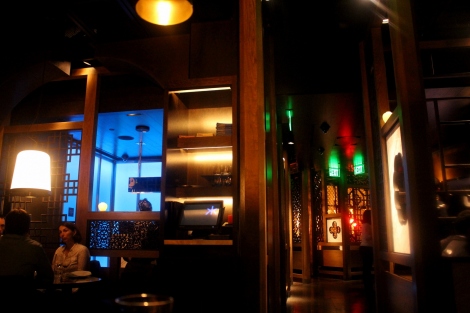 The drinks only outing started with a cup of gold cocktail, owing to my penchant for all things gold. It was a saffron infused Diplomatico Reserva Exclusiva rum, green chartreuese, passion fruit and lemon juice. The saffron flavor and scent was immediately apparent, and one that I had grown to love from my Indian roots and voyages, and was a luscious combination to the depth of rum and sweetness of passion fruit. It tasted like a pirate’s maiden adventure – deep, strong and unexpected. My next choice was the Zesty Martini, with fair quinoa vodka, pineapple juice, ginger, cilantro and cracked sea salt. The freshness is what drew me to this one, with my favorite fruit pineapple and another Indian rooted cilantro as a garnish and infuser. Slightly spicy, it was akin to another sailor’s dream, owing to its punching sea-water style freshness. 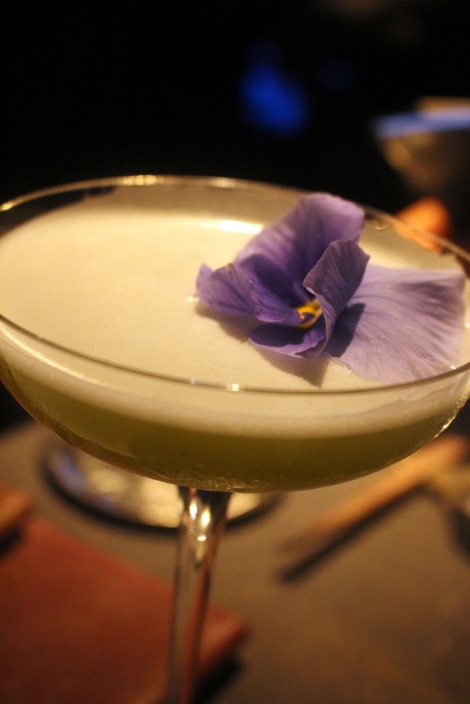 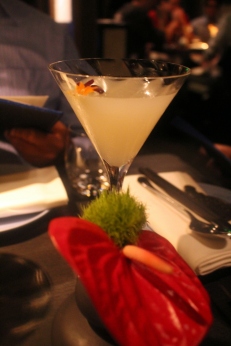 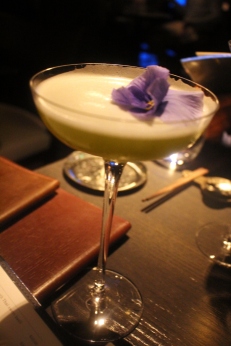 As a bite, things started off with vegetarian dumplings, colored and flavored with the likes of carrots, peppers, avocado, peas and mushrooms. The plate was a shimmering mosaic of shapes and hues, with particular attention paid to plating. Texturally, they were soft and flavorful, with bursts of salty soy and crunchy vegetables in each bite. 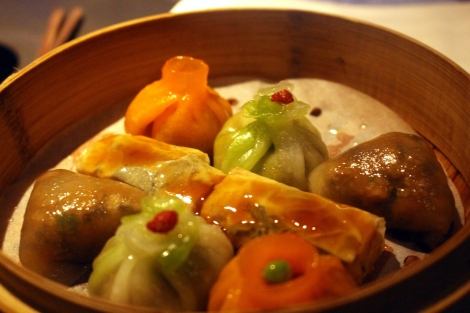 While intrigued by the cocktail menu, the friendly bartender insisted on trying a neat sake drink infused with cucumber juice. The result was a very California-China fusion of an aromatic liquor with a very Western freshness. Much like the Bourbon drink with a stamped ice cube, infused with a fresh strip of sugarcane that continued to seep sweetness into the drink. 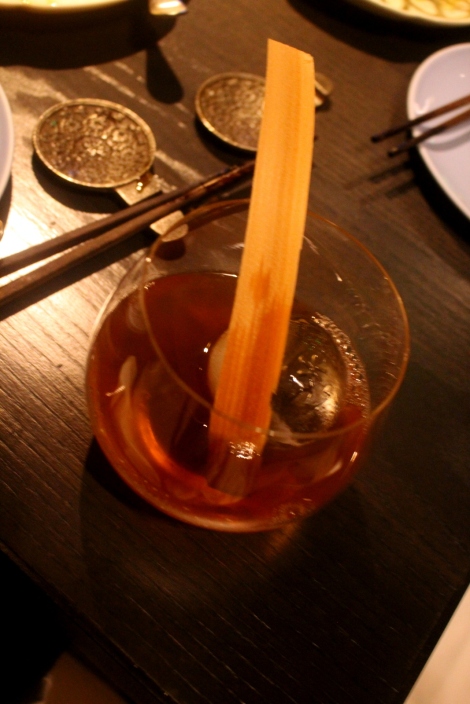 Intoxicated on the power of mixology, we opted for a duo of desserts, as expected by my trajectory of consumption. The first was a plate of chocolate dumplings with clementine tapioca and florets, looking as luscious and equally misleading as its savory counterpart! The creativity in the dish was commendable, and while the chocolate was overpowered by the fruity flavors and the texture of the dumplings, it was still a sweet and creative taste for the palette.

My preferred favorite was the peach and mango mousse and raspberry sorbet. While I would not usually opt for something so saccharine and fruity with overwhelmingly creamy textures, this one was plated like a fishbowl in a deep, round glass, with waves of lusciously creamy orange hues that blended the sweetness of mango with the sour peach flavors, cut aptly by the sorbet texture of sweet raspberry. Pretty and balanced, this was one of those light Californian desserts that kept West Coast folks in slim shape.

While not a meal in total completion, the excellent cocktails and their flavor fulfilling mixology was enough to whisk me back to this perch for a bucket full of liquor, any day in California.

9 responses to “Mixology as my Elixir”