My life is often described as a constant churn of juxtaposition.
Yet, I embrace the clamor of having so many lives molded into one entity.
Which is why I yelp in glee when I see a perfect paradox.

For picture this: when a day is infused with inhaling at a solemn golden gold-plated temple and an award winning massage at a luxury JW Marriott, and eating street food like pani puri in the strenuous heat, you know that you are living my life. Being of part Punjabi heritage, I always feel a strand of apprehension and excitement when taking my multifaceted self back to my roots. And those road trips of adventure from one inner city to another have always been ones of cultural awakening. For in the middle of nowhere, sometimes, you find yourself. Chandigarh is often a central location, making it accessible to other areas of Punjab like the over-the-top hoity Ludhiana and the culturally charming Amritsar, and of course the metropolitan Delhi. On one such road trip, in the middle of nowhere really, are a series of pop up style historical structural resurrections touted as Haveli, meaning palace. These offer art therapy, shopping, cultural insights and most importantly, street style food in a clean, hygienic and sumptuously authentic setting. A spot so popular that I visited it twice, both by day and night and learned three things:

A sculptural garden of splendor, the artifacts and statues of local Punjabi men and women in their colorfully saturated daily lives is intoxicatingly refreshing. Things were truly not what they seemed like or what we had heard of from history: the dancing women, the men helping them with their chores, a man reciting his bookish sales in the era of smartphones, a boy helping his elderly parent with a donkey cart, while being surrounded by a similarly bewildered horse and donkey of real flesh and neighs! There was even a full size truck in the interiors, which initially baffled my senses as I saw an artfully created driver perched in the seat with the headlights blinking! Besides being aptly created art, it was a cultural learning and a peak into the lives of those that seemed truly happy in their simplicity. 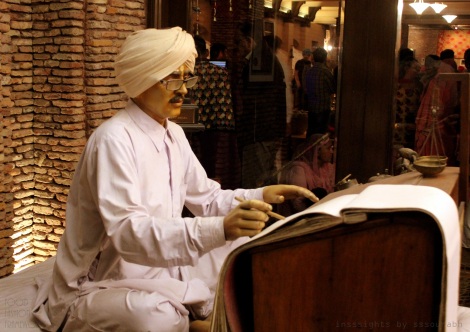 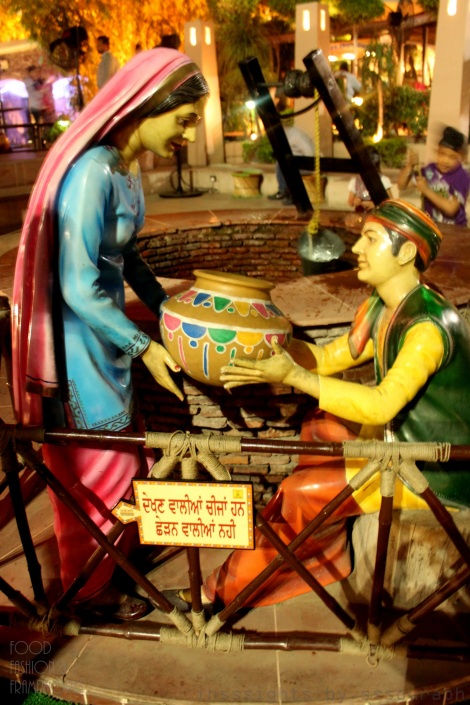 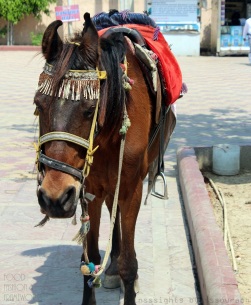 To testify the happiness of these immortalized sculptures were fragments from their lives – clay pots stacked up into a wall to signify how they fetched their water, jewelry and handicrafts of metal, brass, timber alongside glass bangles in a plethora of rainbow hues, and the classic paranda, a plaited hair extension with colorful threads. A corner even showed a stash of hookah alongside hand strewn hay beds which were both a couch and a bed for those that slept in the open air, staring up at the stars and counting dreams. 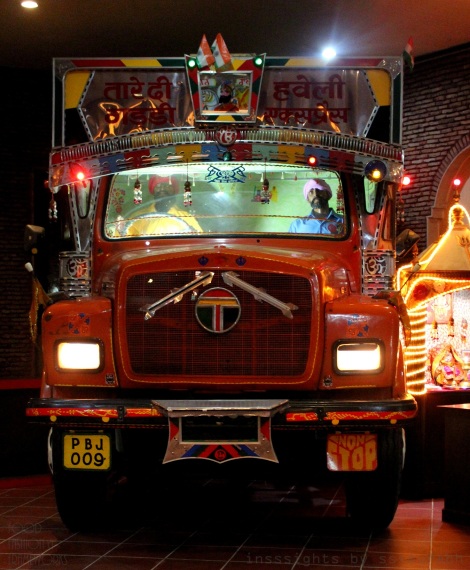 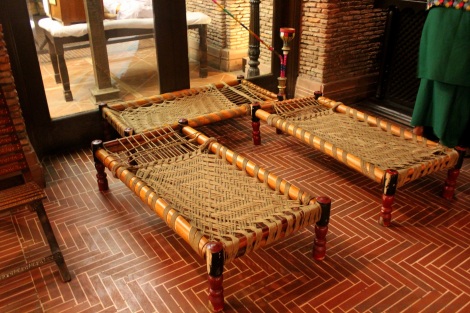 It was a world I had gotten quite estranged from, but one which enticed me due to its sheer simplicity. In a world devoid of technology, it was within these mortals to find happiness within themselves. And they clung to historical traditions and stitched them into their daily lives with whatever made the most sense, and contributed to a sense of well being. Life was so much simpler, and it was one that I had perhaps forgotten about in the bustle of my daily, rather random grind.

After philosophizing to myself, creating mental frameworks but unable to quite charter them onto a map, I moved on to focusing on the more important element of this destination-less voyage: the food. The street side stalls had a man making fresh jalebi in a simmering pot of oil. It is a classic dish often eaten for breakfast, or all day long, devoid of nutrition but soaked in sugar syrup indulgence! The deep fried flour batter is swirled in twisted shapes, which are soaked in sugar and eaten crunchily hot. I devoured them by the dozen.

Once inside the seated area, the menu was printed on a traditional hand fan of sorts. I dived straight into my classic favorites of Punjabi cuisine. The bread basket contained thick buttery naan, steaming with freshness and literally too hot to even touch with bare fingers, as well as mustard seed and dil covered kulcha rotis. The lateral layers in these breads spoke of the density and love with which they were made – thick enough to remain sturdy but delectably chewy, literally dripping with ghee and with a sprinkling of garlic and herbs. 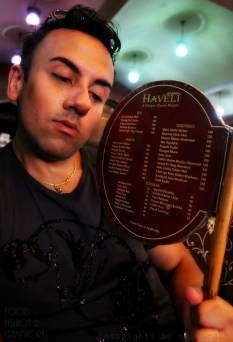 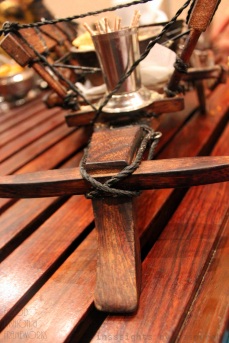 There were a few mains that the breads could be dipped in. The classic Punjabi dish is chola, which highlights chickpeas as the main ingredient in a sumptuous gravy of onion, chopped tomatoes, coriander, garlic, chili, ginger, mango powder and garam masala. This one was spicy, simmering hot, and with a juxtaposed flavor of tangy and spicy, with an undertone of natural heat from ginger. I licked the metal bowl clean. 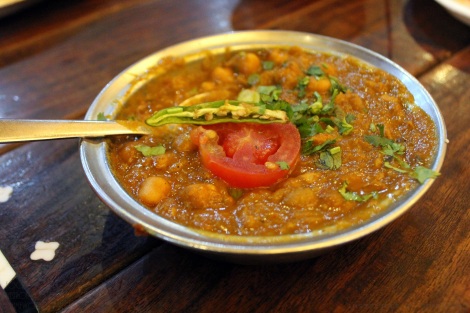 With paneer (cottage cheese) being my favorite of all cheeses, I could not ever not get it at a Punjabi staple. I asked for a creamy paneer dish, which was in a similar gravy but with an amplified tomato, yoghurt and spice quotient, sans the tanginess. The plump density and bouncy texture of the paneer was perfect, soaking in the spice from the sauce yet rendering enough gravy to allow for multiple mouthfuls of individual helpings. It was so lovely that I actually ordered a different variety, one that was with a drier gravy and with a healthy dose of peas and shards of cream. This was a dish that didn’t need to be doused on bread, and retained a tamarind-like flavor with a textural balance with the freshly cooked and bursting hot peas. 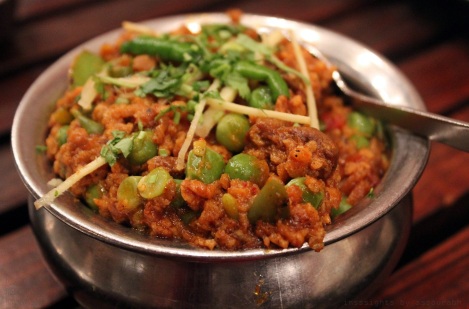 The last was the malai kofta, the creamiest of all gravies of butter, yoghurt and spice, with balls of vegetables, onions and spice fried into retain their sturdiness. These are typically akin to vegetarian kebabs, but softer in texture and spongier depending on the consistency of the vegetables utilized. It was on the sweeter side, owing to the helping of panela (unrefined whole cane sugar) used.

The last  helpings arrived on a bullock cart to ape the joys of open air riding, really a privilege of nature’s true forms of travel in an era when technology had literally ruined this charm. On them were cubes of panela, which in India were used in cooking or could be eaten whole (sorry dentists). Alongside were packets of saunf (licorice) for digestive fibre reasons. Which I thankfully pocketed many of before chowing down paan – a betel leaf wrapping containing coconut, licorice and other sweet elements. This was one of my favorite reasons for ending a meal in Punjab, for it was a sumptuous, sweet and fibrous dose of happiness that I could chew down in buckets. 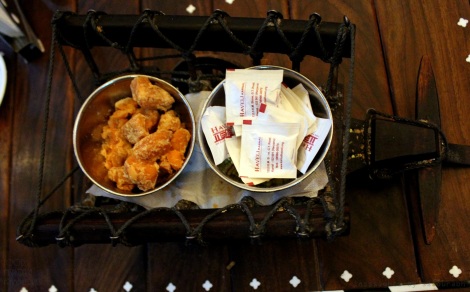 It was an almost dream like experience, sometimes sparkling in its architectural fantasy like a mirage in the middle of nowhere, and at other times glistening in the ample moonlight. But it taught me so much, and enabled a core of irreplaceable self discovery. 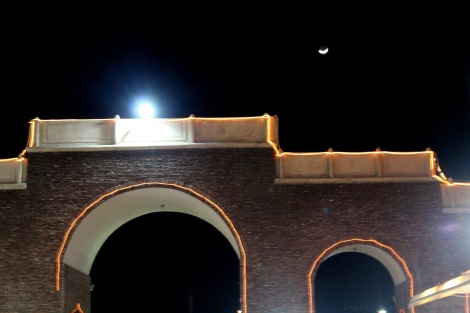 15 responses to “In the Middle of Nowhere, You Find Yourself: Traveling the Inner Lands of India”