“Normal is an illusion… normal for the spider is chaos for the fly.”
The pensive line by Morticia Addams could not fit the entropy of Vegas better. Alluring by day, hypnotic by night, apparent by light, wild by dark. Everyone has their own rendition of stories in the adult playground and Alice in Wonderland style oasis in desert, where visual stimuli attack your every sense on the Las Vegas strip. 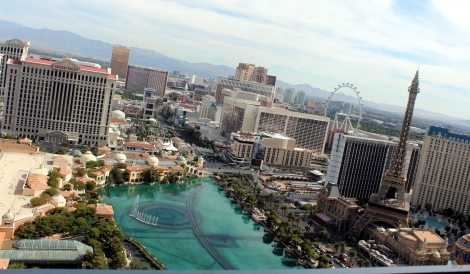 Having dined and fashionably graced several icons on this slice of a rather familiar desert oasis, I found that there could be neighborhood (read as ‘within my hotel’) gems that I could grace. And one happened to be an Italian food luxury chain of sorts. For gone are the days when chains were associated with plastic menus and greasy seats; sharp businessmen in the guise of celebrity chefs have realized how to rake moolah by opening coveted hot spots which blur the lines between nightlife, culinary and entertainment. And thus, I landed at Scarpetta Las Vegas, after a turbulent night shaken by waking up in my suite overlooking the beautiful architectural artificiality itself. 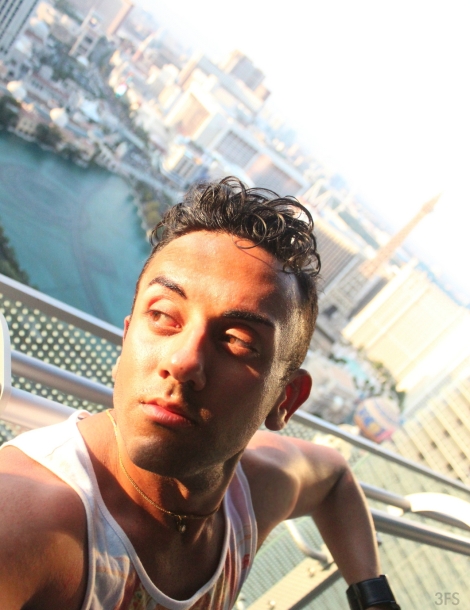 I had the pleasure of meeting Chef Scott Conant at numerous New York Food and Wine Festival events, with his discerning red hair and a knack for perfect pasta. Inevitably, I was up for a trip to Italy‘s earthy, culinary foothills, diametrically opposite to where I was.

Located inside the notorious party hotspot called the Cosmopolitan, it’s award winning name means “little shoe”, or rather, the shape that bread makes when soaked up in sauce. Rather fetus like for some, but I left it as a more PG joke. With a staple location within the gigantic hotel itself, my trip from the suite balcony to the glittering table side service was only a few seconds, without compromising on views. 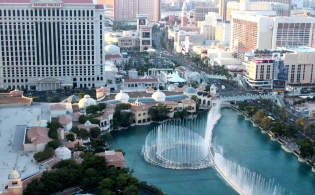 Italian food is all about carbs, a trait that is in direct juxtaposition with the fit bodices and fitted style that transforms streets into runways. And yet, I love both food and fashion, hence my namesake. The bread basket was filled with deliciously warm bread marbled with basil pesto. The flavor was the perfect ‘morning after’ treat, with a slight hint of olive oil, a freshness of basil and the seductively warm bread. For no Italian has an excuse for lack of heat. Yes, I am still talking about bread. 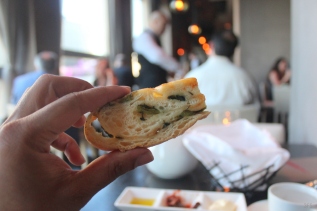 Given that my afternoon would be spent recovering and sunbathing by a poolside, I opted for smaller, lighter bites. With a charming vegetarian and vegan menu, the hospitable staff guided me to choosing the farro risotto, a grain I had encountered in hearty meals before. Arriving like a stuffed replica of a Colosseum, the farro pasta formed the base of the dish, steaming with roasted vegetables and covered with basil and shaved parmigiano.

Warm and satisfying, the al dente pasta had a savory chewy texture, complemented by the decadent crunch of partially cooked vegetables. Steaming and buttery, the cheese cut the richness with its salty notes, even partially melting into the pasta itself for the heavenly gooey strands that dreams were made of. 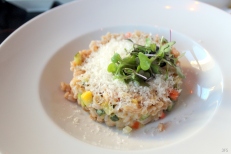 And to my own surprise, the dish filled me up. Almost in entirety! Promising the staff that I would conjure up an appetite at the New York rendition of the restaurant, I still left room for dessert, a sin in the mandatory shirtless sin city. Keeping the sweltering weather in mind, I glossed over the appealing chocolatey indulgences and favored a coconut panna cotta. And what arrived lived up to the city of Vegas as an ultimate illusion.

It looked like a vivid dark coral soup, reminiscent of several runway hues from fashion week. Almost like a visual game of deceit, for it looked like ricotta on tomato soup. It was in fact guava soup, topped with the panna cotta and caramelized pineapple. Treating myself to some of my favorite tropical fruits, the guava in particular whisked me to India where I had spent many months acquiring it’s taste with my parents. The chilled soup tingled all the way down till my abdomen, readying me for the boiling pool beds. The coconut panna cotta was jiggly and decadent, and although not my favorite of textures, blended well with its accompaniments. The pineapple was not saccharine in caramelization, letting the citrus cut through the sweet and fluid textures. A pineapple fritter added crunch, and amused the drunken passerbys into thinking it was Parmesan cheese!

A play of temperatures was clearly at play, and with a mind and body chilled like ice in succulent pleasure, I slowly floated out into the blazing heat of this oasis.

Knowing that an oasis never really disappears, but rather swallows you up. Like ice.