Deserts are simultaneously beautiful and barren,
Opportunistic and wishless,
Stunning and steaming.

It is all sand after all – craved on the beach, and neglected on the desert.

But sometimes inspiration comes in the most unlikeliest of places of overlooked beauty. The first thing that struck me about Brett Johnson‘s presentation at New York Fashion Week Mens (NYFWM) was the backdrop of Pantone‘s colors of Rose Quartz (baby pink) and Serenity (baby blue), juxtaposed against the green of prickly cactuses. While the color scheme was reminiscent of the several collections of the season, I was unable to place the ambiance. 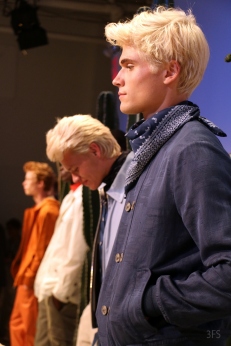 Only to find out that Brett Johnson was in our midst himself, creator of a collection inspired by the rocky mountains of New Mexico of Sedona, Arizona. Yet another testament to travel inspiring fashion. 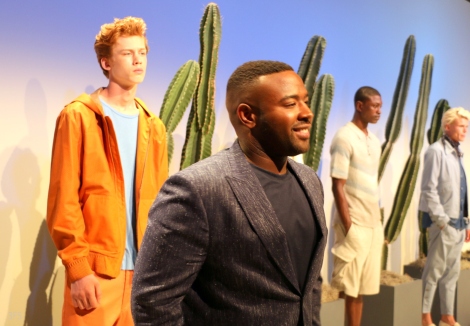 Brett Johnson’s designs are inspired by his childhood travels to Italy, making him a quintessential Renaissance man. Using Italian fabrics, his is always a detailed, luxury and fine fitted set of looks, almost like a timeless collection which always speaks of of effortless sophistication. Similar to the Fall Winter season, he focuses on the range from formal, semi-formal and casual wear (one particular red suit from last season remains an eternal favorite!).

His multitude of dapper dandies were consequently clothed in fine fabrics and well cut layers, read for the blistering desert sun and sparkling sand dunes. My favorite look combined both Pantone colors: a light blue linen sweater with pale pink cotton pants. Perfect for dressing up or dressing down, the candy colors literally translated to eye candy.

The rusty rose and pinks, seen in many other menswear collections this season, was a prime color. A double breasted linen suit, or a detailed bomber with a brighter pink shirt and trousers, were clear forays into the world of pink menswear, seen before with Son Jung Wan, too. They suited each complexion they were on, making it a more versatile hue than simply nude. 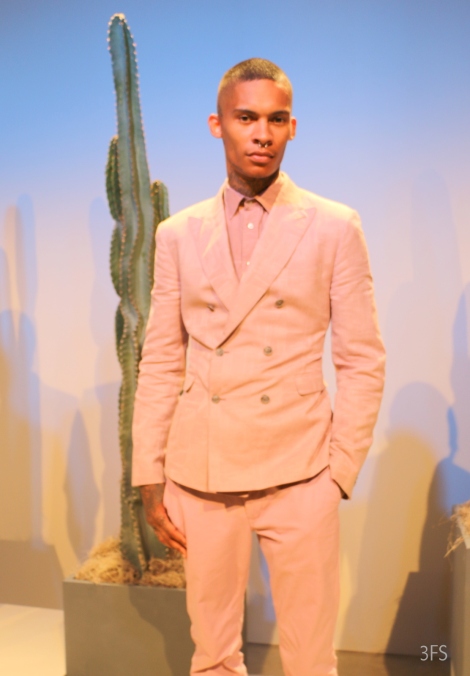 Moving on to the plethora of blues, a favorite was a denim on denim look: a blue jean jacket with matching Japanese style cropped trousers, set in sailor style with buttons at the hems. The looser fit and abundance of layers made it easy to see how these would work for both a sweltering summer day as well as a chilly spring breeze.

A darker, indigo buttoned jacket with pleated trousers was made casual with a surprising neckerchief, perhaps hinting at the comeback of neckwear.

Besides the prominent pastel hues, Johnson’s other colors of choice included natural olives, greens and sunset oranges. A highlight was an olive vest with linen utility pants, or a self printed suede chocolate blazer in classic cuts. 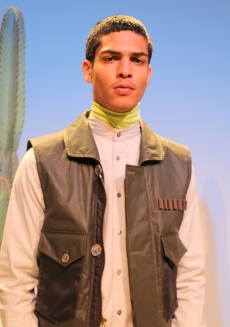 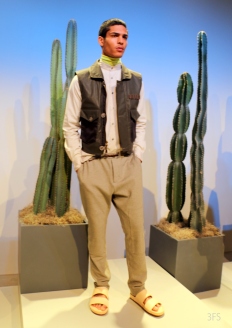 By pairing a vest with cotton jogger style trousers, complete with a drawstring, Johnson showcased how an otherwise drab brown plaid suit can be refreshed both simply and dramatically.

A double breasted olive spring coat and an indigo jumpsuit were juxtaposed against orange or bright blue turtlenecks, respectively, creating a jarring look that was in contrast to the other monochromatic pieces. Nonetheless, they paid homage to the stark desert climates and topology, which worked as a visual inspiration. 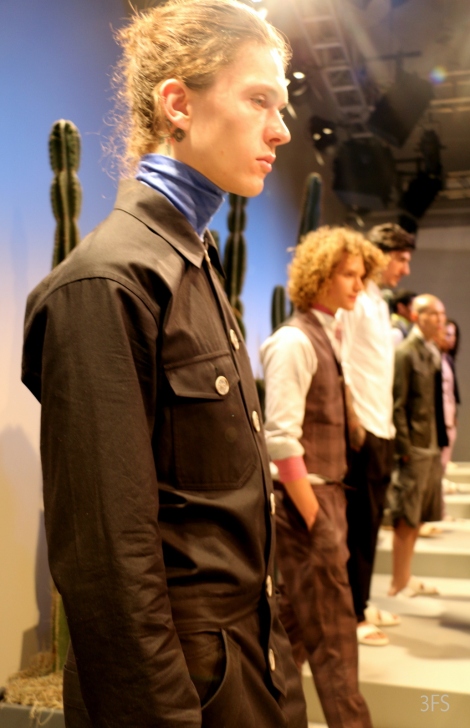 An orange jumpsuit looking piece ended up being a jacket and trouser combo, showing how the matching of colors could be creative, deceiving and undeniably playful. Almost as much as the aforementioned plaid suit on a boy with infectious curls.

Like the glimmer of shimmering sands, whites were also prevalent in the collection, and kept intentionally simple. With beige cargo shorts with a silk and linen shirt, or a white denim jacket with a white shirt, these looks felt the most adaptable to the mainstream market. 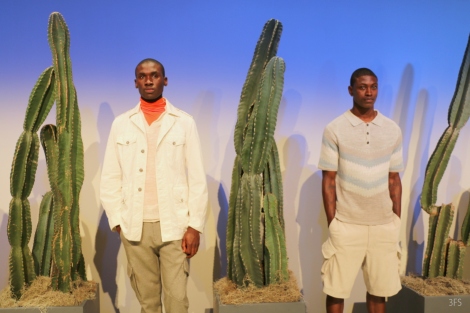 A scorpion design on the right abdomen of one crisp, white shirt was playful and suggestive all at once, epitomizing the desert summer at its most scintillating. The fact that it was adorned by a heavily tattooed model was an intentional juxtaposition, evoking many a smiles.

With a sensorial experience of what to expect for fashion staples in the heat and desert, I walked out with a newfound fascination for inspiration: it can truly come in any form, and from anywhere. For now, I would be chasing scorpions on pristine desert sands. And thankful for not being on a beach. 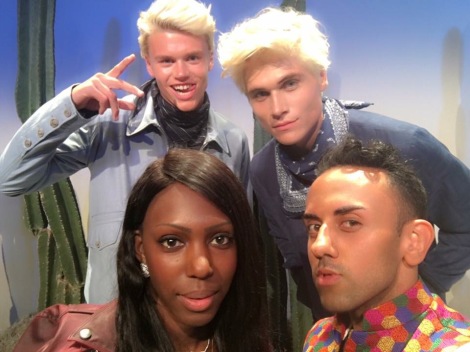