Motorbikes are my iron supplement.

For the longest time, I have envied motorcyclists and their leather clad, denim skinned, rough on the edges, kick-out-of everything lifestyle. One that I embraced from time to time like in San Francisco, and was not held back by gentler visuals of serenity or disparate machismo acts of cowboy glory. Quite a history of editorials, as you can see.

Which is why I thoroughly enjoyed the classiness of Dirk Bikkembergs‘ collection at Milan Fashion Week.

With a focus on the biker world, and a runway armed with Bond style motorcyclists on real bikes, poised like an omenic wild encounter under the neon blue lights, it was a visually captivating scene.

There were so many visual stimuli that attacked the senses in every outfit that I took many moments to inhale the details, and consequently several hours to outline what I enjoyed the most. Starting with accessories, there were knee high suede or leather boots in darkest of shiny blacks to lightest of Eeyore greys, textured in fuzz or with rippled inserts and padding.

Offset only by studded snoods and neckerchiefs, a modern rendition of what I had seen in more dapper styles of Canali in Milan and J Lindeberg in New York. And since I envy studs, it made for an alluring trait. With a penchant for sunglasses, the quirkiest of styles made it to the forefront, predominantly in double frames, both clear and polarized, and particularly festive with a dapper nightlife look. The gloves were my least favorite, out of personal choice (functionally mostly, as I find them disruptive) and due to their jarring disposition in otherwise macho, svelte styles. 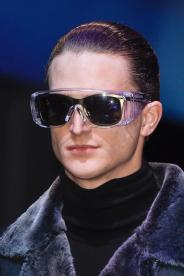 The bottoms were tight fitted, often distressed if in denim. With athleisure being a common trend off late, compression tights with padding and asymmetric, psychedelic prints were also dominant, bridging the streetwear and sportswear styles well. 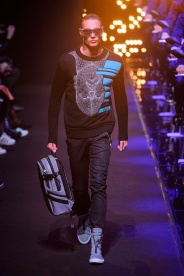 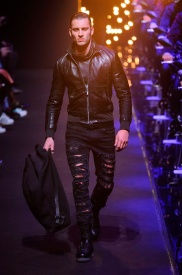 Full on leather bottoms were attractive to gape at too, succulent in their shine and detailed with asymmetry once again, a signature of the designer. With horizontal stripes, zipper pockets, or full on inflated biker gel pads in whites and blues with knee and shin pads, it was good to see masculine legs finally getting the attention they deserved. My favorite was obviously the red leather pair, complete with self embossed zipper in trigonometric outlines.

Similar to what I had seen in New York, tops were looser, with voluminous capes, a retro fur coat, big bomber jackets and stylishly cut regular black coats and jackets, with details on asymmetry and zipper closures. 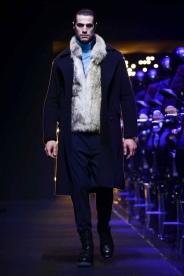 When focusing on tops and sweaters and sweatshirts, sheer was a dominant trend, catapulted by six packs and studded tattoos, a first in my eyes. While likely not functional unless wearing sleeveless or entirely naked, it was a vibe that fit well with the neon after hours and nightlife bling that these biker boys exuded.

And thus ended a season of Milan Fashion Week, with spot on locations and succulent entertainment. Thanks to Essential Homme, Designs Fever, Fashion Insider and Now Fashion for visuals.

As for me, back to being a biker boy, and on to more shows and lifestyle.