What would you pick between your love and your lust?
To clarify, I love leopard print but lust for sparkles, and often they both combine.

Bu this time, the designer that brought leopard print to my adoration had a collection that was surreally lacking in the very statement, however giving way to sparkles. While I wasn’t prepared for it, I was evidently thrilled to witness a changing direction in Roberto Cavalli‘s runway show at Milan Fashion Week (MFW). I succeeded the show with a GCDS party, thus clad in evident street style with a DSquared2 shirt, Creative Recreation high-tops, Pull & Bear ripped jeans and a signature Standard Issue souvenir jacket.

chill, it’s only chaos… i was born for it. 💿📀 #PeopleWatching at the neon “Futuro Beach By @gcdswear #MFW” (!?! 🙃) and #Hyperlapse plus #LearningItalian with @ale_magni 😂 #WreckTheParty #GCDSFuturoBeach

Embelishments, sequins of all sorts on shades of orange, rust, brown, yellow, red and infused with some blue for a balanced earthy effect. The only reminiscence of animal print was with embroidery, tribal prints, and the likes. The styles themselves comprised of biker shorts aplenty, feeding yet another biking passion. The playful vibe was in tact with short shorts, glitzy sneakers, tighter tops and tailored blazers worn on top of varying lengths of tops. Designer Surridge ensured that there was a balance of form and sequined style with mischief, a tad different from the brand’s legacy in haute and provocative, but a welcome change for spring/summer nonetheless.

the good news is: biker shorts are back in sparkly colors the bad news is: it’s not leopard print @roberto_cavalli #MFW

Sparkles and biker shorts for #SS19 By @roberto_cavalli at #MFW 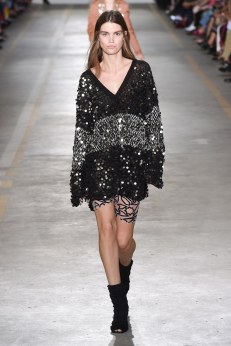