Happiness is… dessert before dinner.
Or even dessert instead of dinner!

Located in the heart of the nightlife central of Chelsea in  New York, La Sirena was a sunlight splashed and checkerboard tiled cozy cave in the Maritime Hotel, serving contemporary Italian cuisine worthy of its Michelin Star. The dessert tasting comprised of 6 courses, 5 being traditional desserts and the last an interactive pairing with wine. Executive Pastry Chef Thea Habjanic came from a solid pedigree from the Institute of Culinary Education and had worked at Le Bernardin, David Burke Fishtail and the Corner Table Restaurants (The Smith, Jane). 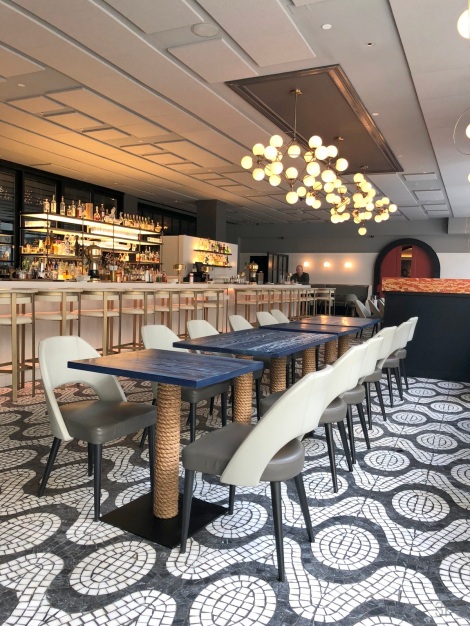 This prickly porcupine looking dessert was literally art on a plate. With perfectly torched honey ricotta mousse, it was the sumptuous olive oil cake, a favorite from previous inhalations in Chicago and Los Angeles, that won my heart. The inside of the mousse was a surprisingly bright blood orange sorbetto, discoverable only after first bite! The textural contrast of spongy and olive oil soaked cake, cut with tangy icy sorbet and sweetened with creamy mousse was refined, sensual bite. The honey cardamom sauce wrapped the dessert up beautifully with just the right amount of spice to offset the honey. 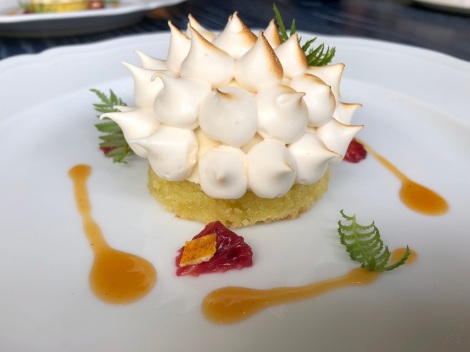 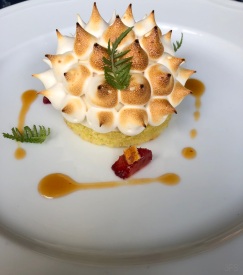 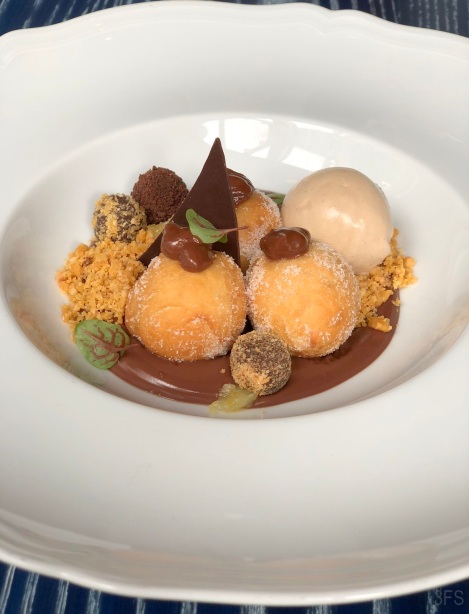 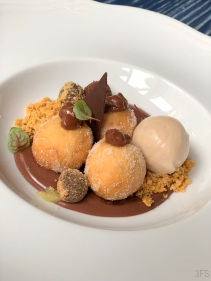 Named after a Mexican Italian fusion with a hint of comic timing, the deconstructed tiramisu was indeed art on a plate. Mocha and mascarpone constituted the cake portion, topped with a sugar layer, a dessert rendition of mole sprinkled with my favorite pomegranate arils, and topped with what I thought was one of the best sorbets I had tried in recent times: chocolate guajillo sorbet. The combination had the right notes of sweet cake, bitter coffee, and chocolate decadence was elevated further with the textural contrasts. The highlight was the spicy aftertaste of the sorbet, so much so that I placed an order for an extra scoop!

My infatuation with funky ice cream flavors has been documented before. Which is why when I found that we were in for savory sorbet, I was thrilled! The portobello and candy cap mushroom gelato with balsamic and sea salt arrived looking deceivingly like a caramel, but had the aroma of mushroom. It even tasted like it, almost like a cold punch of a deeply savory essence sans any saccharine taste, made almost tangy with the balsamic! Truly something that resonated with the Alice in Wonderland vibe that I had come to epitomize (what with the absence of a caterpillar who promoted such mushrooms from his perch!). 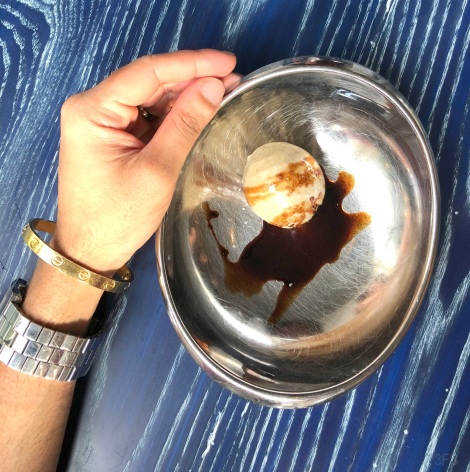 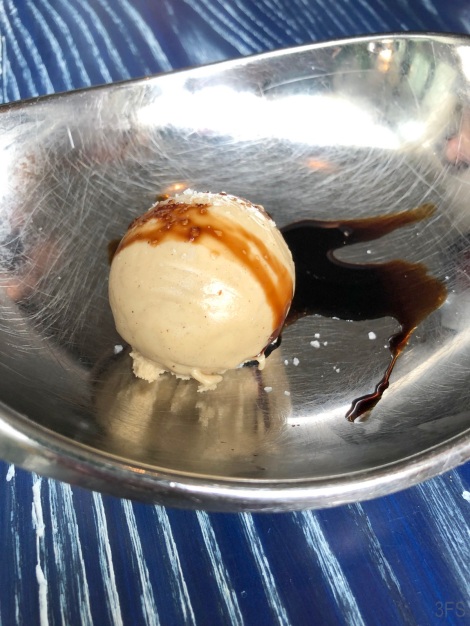 Having tasted Negroni at its birthplace in Florence, and even beyond, and being infatuated by bitter flavors, I was ecstatic to taste a dessert version of a Negroni. Gastronomy in tact, it was served in a mason jar with orange Campari sherbet and sweet vermouth whip, topped with Campari mandarin pearls (akin to dessert caviar in their appearance) and Campari caramel. This was then topped with Prosecco foam, rounding it off as one of the booziest desserts I had tried. It stuck true to its bitterness promise, with not one taste out of place – I tasted the citrus, the vermouth, and naturally buckets of the Campari, topped with a dreamy whiff of Prosecco. Cocktails anyone? 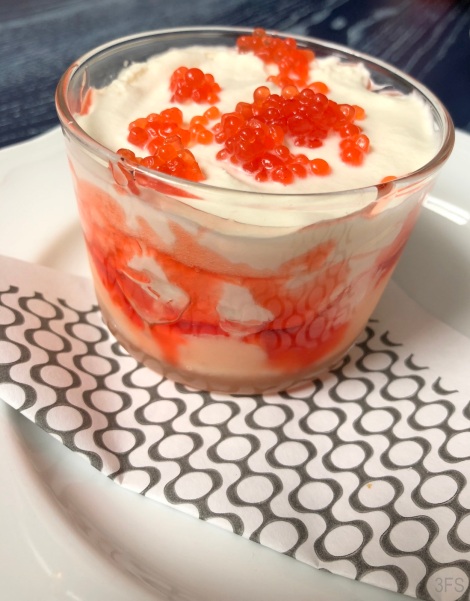 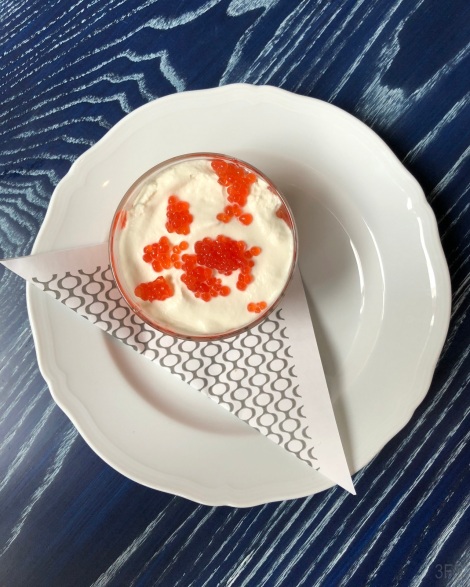 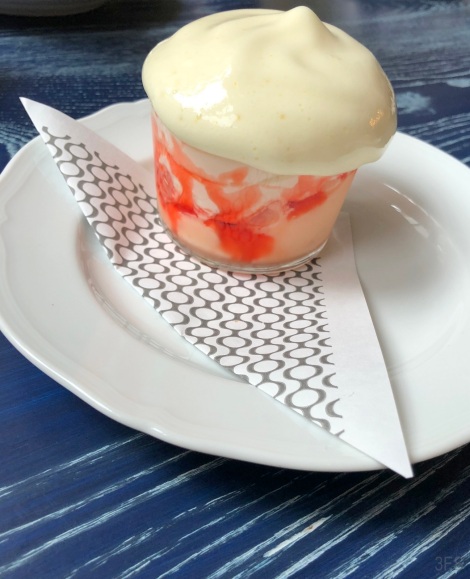 With Wine Director Scott Woltz, a cart with a host of wines and ingredients strolled into the sunlight, where each of the Vin Santo dessert wines was paired with a biscotti comprising of ingredients on the cart – which to my delight included both chocolate and sultanas and the likes, alongside familiar Middle Eastern and Indian ingredients like saffron and tamarind. Presented table side, the cantucci e vin santo whisked me back to my days in Milan when I too would shamelessly relish my biscotti inside my wine!

1. Salvetta, Trentino 2009 ➕ Saffron, Apricot, Almond: the taste of the classic biscotti and wine pairing whisked me back to Italy with my love for all things infused with almond.
2. Castello di Sonnino, Tuscany 2008 ➕ Fig, Walnut, Allspice: a tad of spice in the wine was complemented with the sweetness and spiciness of the biscotti, with chewable chunks of my favorite Middle Eastern staple.
3. Lanciola, Tuscany 2007 ➕ Chocolate, Tamarind, Cherry, Hazelnut: possibly one of the most interesting combinations, owing to the darkness of the chocolate, the nuttiness of the classic pairings of hazelnut and cherry, and the infusion of an undertone of tartness with the tamarind.

Happy as a sugar infused honeybee, I was ready to book my next trip to Italy to explore its culinary roots. Fairly immediately.

6 responses to “From Italy to New York, with Sweet Love: A Six Course Dessert Tasting”