Expectation can be the root of heartache.
But surprise can be the leaf that stems from this root.

Much has been said about expectations, and how they can rise to the clouds and plummet to the soil, in reverse levels, and repeatedly. As a wanderluster, I have learned to tame my expectations based on what I know of places, without letting too many preconceived notions fog my thoughts. For the moment of surprise, when an expectation is met, surpassed, or falls flat on its face, is priceless.

West Hollywood, home to velvet ropes, dizzying freeways and lusciously dolled women with clutches smaller than smartphones, and muscular men with picture perfect hair and fitted clothing. Los Angeles is a mixture of miniature cities that I have grown to love and call home. And they say when you leave your heart in Beverly Hills, it grows its roots there. West Hollywood is close enough, for roots can travel to nearby locations. Which is why, when I yearn for a coy and charming excursion by night, I return to the Roger Room of West Hollywood, which whisked me into its spell from the first November I stepped into its unsuspecting vibe. On a fairly quieter street between several nightlife and studio icons, this is neither a pickup place nor a swanky lounge. It qualifies as a speakeasy with winning cocktails courtesy of the neon tarot cards as a facade signage before entry.

A shotgun configured seating space with a lean bar under the shadows of red lit upside down vials gives Roger Room a coy and seductive feel. Perhaps this is why you often see both men and women leaning forward on rust hued mohair booths flirting with the bicep flexing bartenders in skinny jeans and suspenders. After all Roger means Yes, a cue given on the menus, on the cocktail coasters, and in the eyes of people on both sides of the bar. 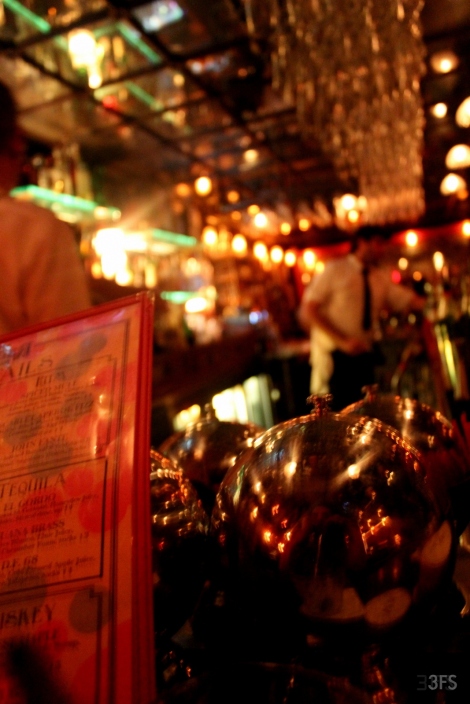 One bartender looks like a buffer version of Ryan Gosling in this bar that is fairly celebrity free for West Hollywood, despite the likes of Cameron Diaz naming it as one of her favorites. Under the red and gold lighting and the mischievous mirrored ceiling akin to those bedroom scenes we’ve seen aplenty of, one would probably be distracted by the camaraderie to notice the occasional star studded debut.

While some may mistake its vibe for divey, its menu, with drinks like the Green Fairy and the Dame, speaks of more storytelling and hypnotic history. And with signature circular spoon at one end and metal straw utensil, you know this is a keepsake for memories to come. Alongside the red and green monkey cocktail clingers. 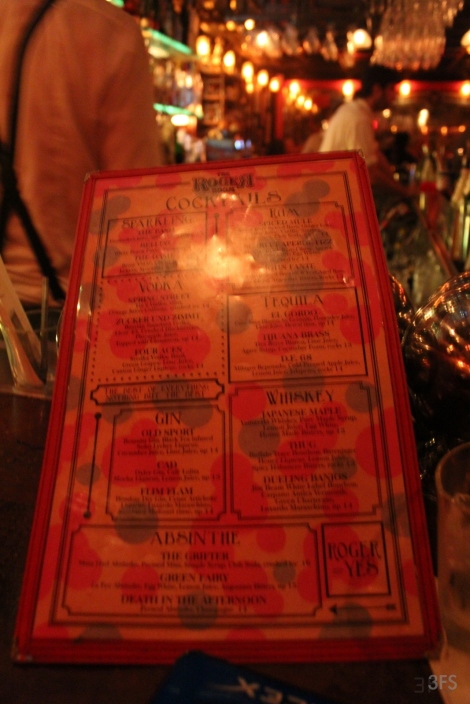 Come November, its always a pleasure to see a cinnamon mustache on a frothy cocktail. Other times, I’ve seen a dainty Hello Kitty. It really depends on the bartenders’ moods or degree of whimsy.

Called the Japanese maple, this signature sweet drink starts with Yamazaki whiskey, adds sweetness with the pure maple syrup, cut with lemon juice, and frothed with egg whites to allow the bartenders to work their artistry. House made bitters add a hypnotic touch.

The other popular drink is the Thug, with a whole jalapeno chopped up to give any thug a run for the water pitcher. With Buffalo Trace Bourbon, Barenjager honey liqueur, lemon juice and spicy habanero bitters, this is not for the quaint hearted. Deliciously green, it gives sippers a jolt in the senses, tamed only by ordering another, sweeter cocktail. 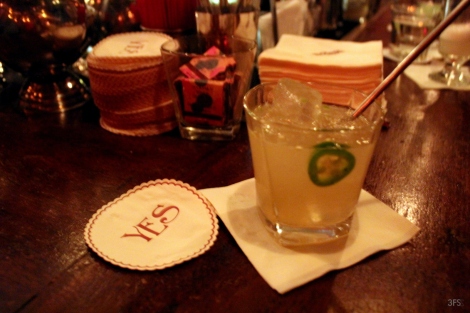 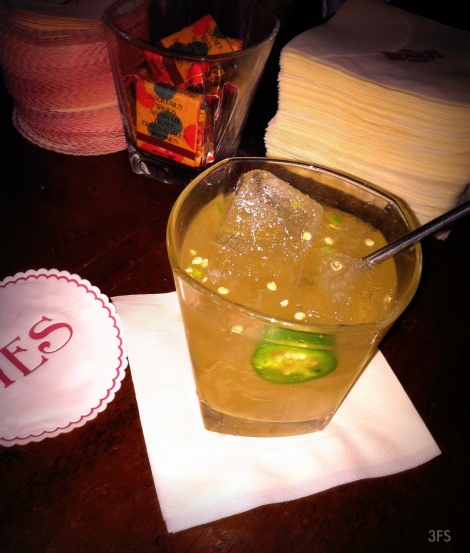 Somewhere in between the drinks and suggestive conversations, when in need of a nature break, one will come face to face with a metal studded door sign. The back of an intimate bar with a wildly tongue-in-cheek signage, that is actually a restroom. 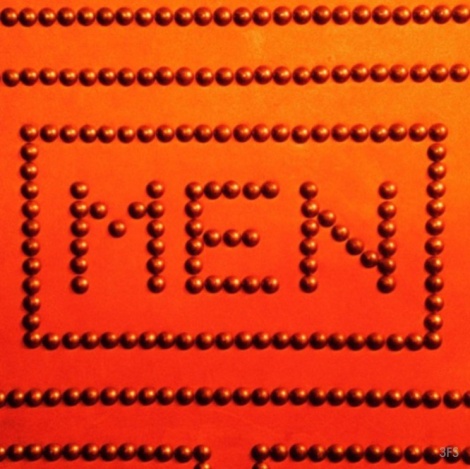 Since many know that I am a self confessed insomniac, I often choose a coffee based drink as a nightcap. The Cad, with Oxley gin, Cafe Lolita mocha liqueur, coffee liqueur and a lemon peel garnish to remind me that lemon juice is the acidic cut, is a staple. With bitter undertones and a laid back sweetness that you only find in the dessert equivalent of ultra dark chocolate, this calms down any spicy memories and makes the conversations with mischief tongued bartenders more sober. So that one can walk out of the neon and red with poise.

While catching up with more patrons and bartenders outside, I learned that the neon signage was actually just the previous occupant’s signage, lending to the speakeasy theme rather nonchalantly. 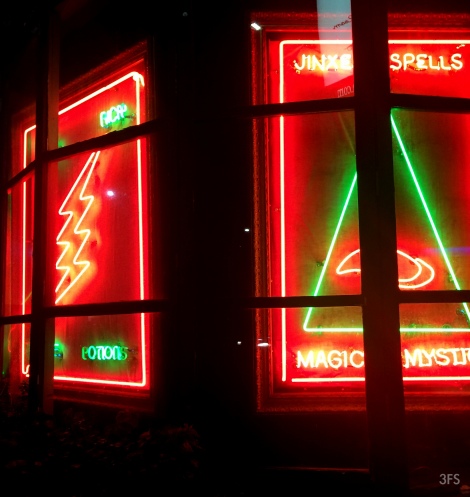 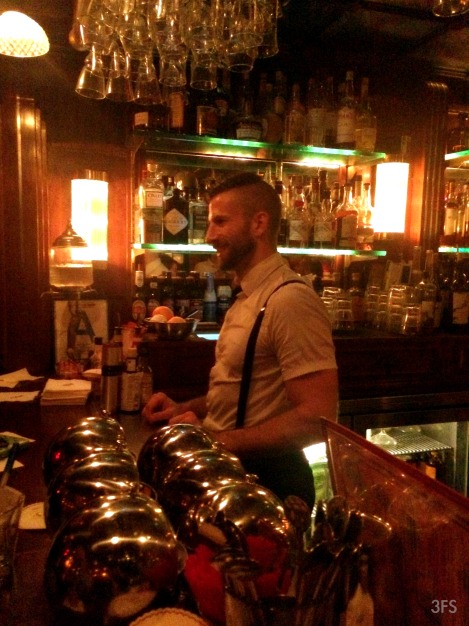 They say you sip to shut your body down. But with a wildly creative experience that I repeated repeatedly, it was time to paint Los Angeles Red.